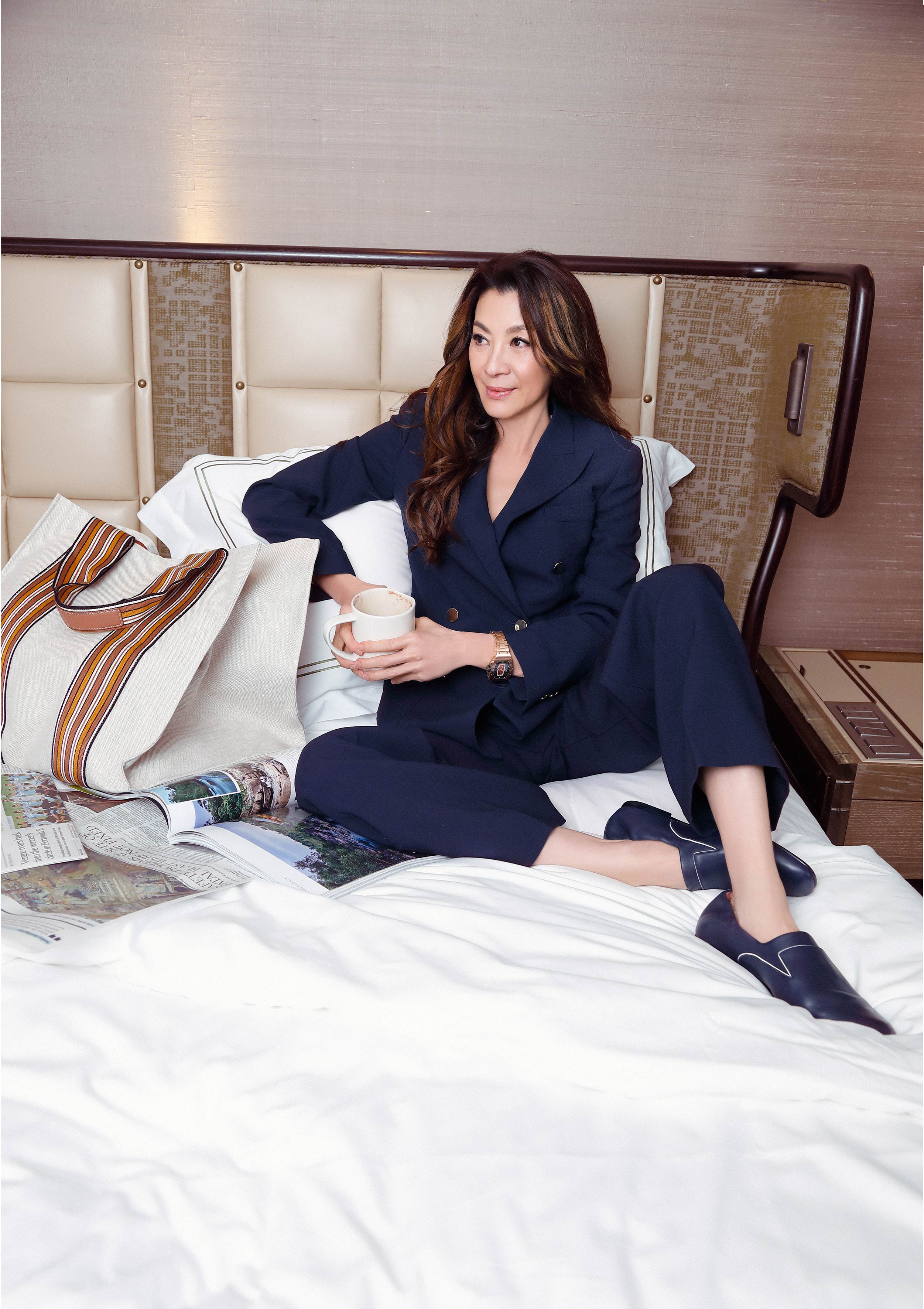 That Michelle Yeoh is nothing like the characters she plays on screen becomes increasingly evident as our day’s shooting proceeds. She’s smaller than you’d ever imagine and exceedingly lovely to be around.

In between shots Yeoh catches up with those she knows around her. “I hope your mum is feeling better,” she says to an old industry friend, with evident concern. She’s just as easy among those she doesn’t know, so we slowly gather round and, before we know it, everyone’s talking about the latest app they’re playing with, whipping out their phones to show her their new obsessions, just as they’d do with their favourite auntie.

It’s difficult to imagine this is the same Yeoh who played Eleanor Young, the ferocious matriarch of Crazy Rich Asians, with such froideur, or the solemn and fierce martial-arts characters she’s known for — from Crouching Tiger, Hidden Dragon to her recent role in Ip Man 4. The only clue is in her lithe and powerful body, which she stretches and flexes as lenses are switched and lights fixed.

When I mention this, Yeoh’s response is easy and immediate. “But of course I’m not those characters. I’m an actor, right?” She smiles and continues, “I’m an actor who’s stepping into different shoes and I hope that each time I get the opportunity to explore a character that isn’t me. Because I don’t want my audiences to go, “Oh that’s Michelle Yeoh playing [whatever character] in whatever movie, but it’s still Michelle Yeoh.’”

Michelle Yeoh, as it happens, almost didn’t become the household name it is today. The Malaysian-born Yeoh initally went by the stage name Michelle Khan in her early Hong Kong movies, a decision made by local studio D&B, which considered the name more marketable for international audiences. “It’s quite a funny story,” she recalls, “when they did that Michelle Khan thing.

“One day my uncle called my dad and asked, ‘Did Michelle marry a Pakistani? Why did she become Michelle Khan? Like Imran Khan? Which Khan is this?’ And my dad went back to me and said, ‘Yeah, so why is your name Khan?’ To which I replied, ‘Aiyah, long story.’”

Ultimately, it was Barbara Broccoli, producer of the James Bond movie Tomorrow Never Dies that Yeoh was working on, who encouraged the up-and-coming actress to use her own name. Broccoli rightly assumed that if audiences could pronounce Khan they could certainly pronounce Yeoh.

Yeoh, now 56, smiles as she recounts her past with easy grace, but each of her successes came with blood and sweat — albeit probably very few tears. Although she still does her own stunts, reams of interviews recount her early days in the heyday of Hong Kong’s film industry when Yeoh pushed herself to the limit, crashing through glass, jumping off moving vehicles and continuing to perform take after take until a director asked her to rub the dirt off her arm, which in fact was large purple bruises.

“Inner strength, we call it,” Yeoh tells me. “Nothing in life is easy. Anything you want to do, it comes through discipline — and because as I child I learned ballet, that taught me discipline. I mean, if you stand on pointe, you’re already learning how to smile through pain, so I think that conditioning teaches you that life can be hard but it’s OK, because if you ask yourself why you’re doing what you’re doing and you answer with all the right reasons, then you’ll put up with it.”

Does Yeoh reserve this strength for her work — which currently includes a recurring role on the TV series Star Trek: Discovery and her recent casting in the Avatar franchise — and separate it from her personal life? “It can’t be separate,” is her instant response. “I mean, even though we say we should keep it separate, it’s a part of you. You can’t possibly.

“I think where I’m very blessed is that my passion and work are all intertwined, so I don’t ever feel like, ‘Ugh, I have to go to work.’ I’m sure there are days where we all think, ‘Man, can’t I just stay in bed for another half an hour?’ because you know, we work crazy hours, but then once you’re there, the reasons for being there give you that excitement, that joy.”

“And whatever I do, I do it full-on — no half measures. Either that or just don’t do it because you won’t learn anything, you won’t be successful at what you’re doing. There’s no guarantee that it will be a great success, but the most important thing is that the attitude must be there.”
Michelle Yeoh
This all-or-nothing attitude is particularly evident in Yeoh’s philanthropic endeavours, to which she has devoted much of her personal time. A Goodwill Ambassador for the United Nations Development Programme since 2016, Yeoh was in Kathmandu during the devastating Nepal earthquake of 2015. “The day before, Jean [Todt, the French motorsport executive who’s been her partner since 2004] and I were in one of the pagodas that were destroyed and I thought, ‘Well, that could easily have been me,’” she recalls. “I felt very helpless. We got out safely, but when we were leaving I felt great sadness. That I was going home and leaving behind people who were homeless. But leaving was the right thing to do because I’m not a firefighter, I’m not a rescue worker, I wouldn’t be able to do the right things.”

Thanks, however, to an independence of spirit that she attributes to her father, Yeoh got in touch with the Drukpa nunnery whose nuns are trained in martial arts — and whom she knew would be going to help the villagers beyond the capital. “They were the ones who really needed help,” she says, “because when it happened in Kathmandu, all the people came pouring in to help, to assist. But the Drukpa have worked with these families before and they knew them, they knew the number of people in the villages and they knew the needs. Because it’s one thing when you send a lot of things, but are you sending the right things to the right people? You can’t just send blankets upon blankets upon blankets — what’s anybody to do with all of that when what they need is, say, powdered milk?”

Ultimately the right things went to the right people and Yeoh arranged to go back. That was when the second earthquake, the big one, hit the country. Despite the pleas of those around her not to go, Yeoh insisted. Why? “I always have this feeling that you have to believe. You can’t live in fear. That’s what I wish for our generations to come: freedom from fear,” she says eagerly.

“If you’re always afraid, afraid of dying, then what becomes of your life? I’m a part of this world that I want to be better and safer, and it’s a responsibility I have to our future generations. We can’t just come and do whatever we want, destroy whatever there is. And there’s always that lovely feeling of giving back, which is much more fun than simply taking. And we must learn to reach out a helping hand, because think back to when we came to Earth, someone reached out a helping hand to literally help us out. So I went back.”

Yeoh’s help came in the nick of time, as the imminent arrival of the monsoon season meant the taskforce urgently needed to distribute supplies before villages were cut off. Having ensured that rice and powdered milk had reached the families in need, she then returned a year later in her capacity as a UNDP Goodwill Ambassador, with the aim of helping to reinvigorate Nepal’s tourism industry.

“The tourism department said that if I showed that I was happy to go, then others might realise it was safe for them to go to Nepal too,” Yeoh explains. “While I was there, we travelled around the country to speak with the villagers and though things had calmed down, I realised that women — whom I saw walking on the road as I was in the car — were walking miles to get water.”

“During the earthquake the wells dried up, the water disappeared and they couldn’t have trucks at every point, so they had to have a main station and these women would walk three, four hours to get there and carry water back on the heads. Water’s heavy, you know, and they’re not just carrying two small buckets. They have these huge things on their heads and if you think about that, it’s six hours of their time taken away from working in the fields or at home. So these poor women were running themselves ragged.”

Not one ever to sit wringing her hands, Yeoh returned home with a plan, which she executed on a trip to Kuala Lumpur with the help of some kindred spirits. “Fortunately, I was invited to a wonderful event by Mrs Wang at Shiatzy Chen,” she says.

“She’d brought in friends from Taiwan, Hong Kong and China, all lovely, lovely people, so I got up and told them I’d just come back from Nepal and that I knew they were all really generous in spirit and of heart, so could they help me. I started the ball rolling and put in US$10,000, so Madame Wang said she’d match me. Soon ladies were giving and giving — and next thing we’d collected a good chunk of change and we built three wells back in the villages.”

Although she makes it sound easy, Yeoh’s ability to rally people around something she believes in stems from an innate love of family and community. “I have a great passion for what I do and I always think it’s a magical kind of work that brings people together. We have to work as a team, because we can’t work by ourselves. I love that people are in a sense forced to work together, to get on and make the best thing happen. I’m always learning something new and that’s why I find so much joy in it.”

“I wouldn’t be here without my family,” says the Ipoh native, who was bestowed the title Dato in 2001 for the recognition she brought to her home state. “But my family doesn’t just encompass the ones who are connected to me through blood. I have an extended family here in Hong Kong. I have a group of girlfriends. We’re like sisters with different surnames. So for me, this is also the family I choose. You can choose all these amazing people, so over the years, my family has extended beyond my brother and his kids. I have my godchildren, and my friends and their children, so I have a big family, an international family.”