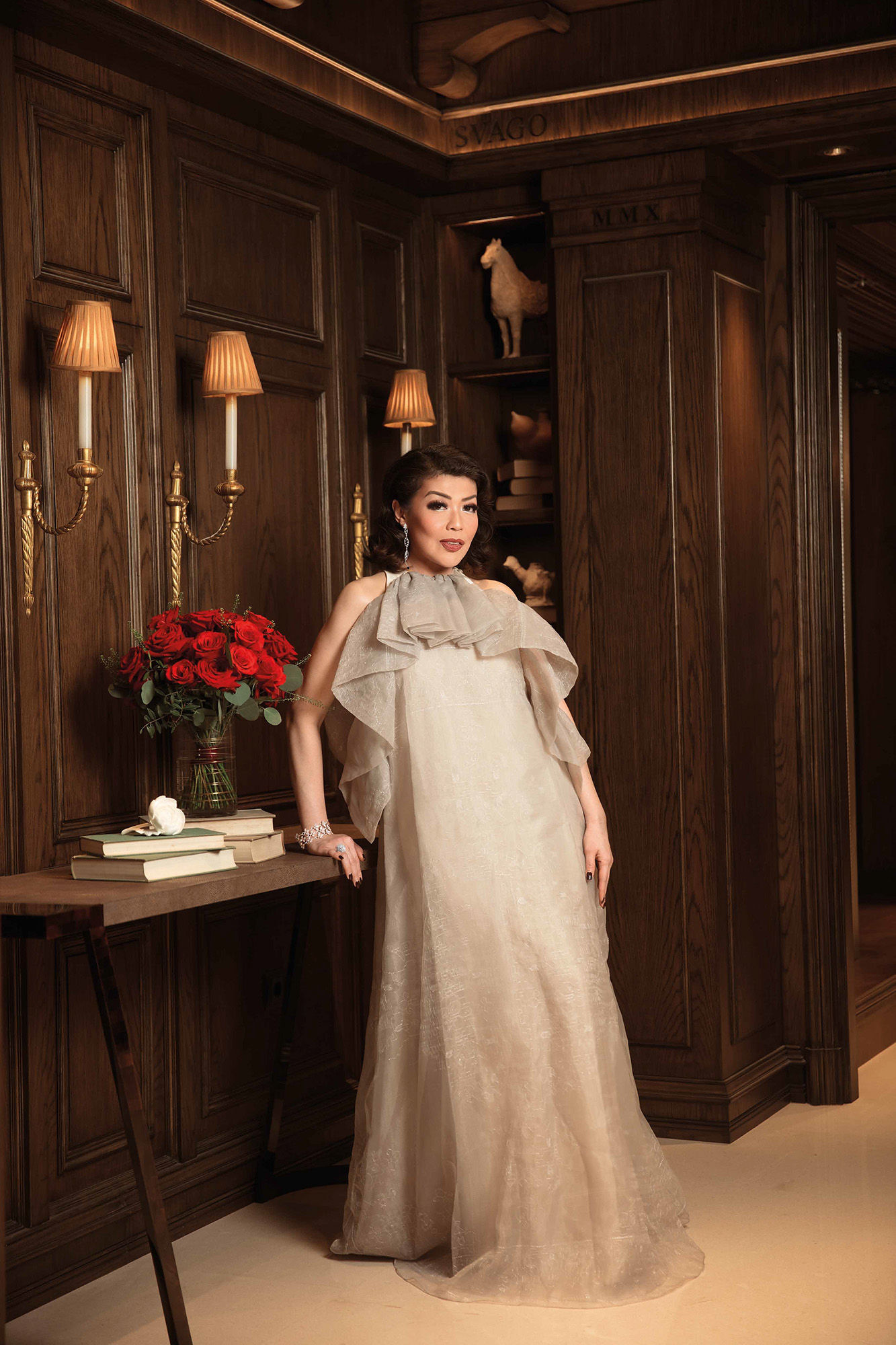 Prestige turns 15 this year and we celebrate in style with some of our favourite cover girls. Draped in beautiful and glamorous gowns, these stunning ladies shared their journeys with us throughout the years.

Andrea Affan and Prestige go back a long way. This beautiful and charming lady graced the cover of our eighth anniversary issue and shared her life story. She told us of her devotion to social work, and to how she unleashed her creative side and ventured into the world of fashion design. The very picture of high-society prominence, combining a dose of entrepreneurship with a much-admired sense of style, Andrea is also a “tiger mom”, devoted to her sons. “Whatever happens, whenever and wherever, I’m always there for my boys,” she declares. Parenting is a “rollercoaster ride” for all moms and dads, as she puts out, adding: “I’m proud of how my boys are turning out. I respect them. I’ll support them. I’ll protect them. I’ll forgive them. I’ll sacrifice anything for them.”
Andrea’s boys are growing up, of course, and they will soon be ready to go to school abroad. Notes their proud mom: “It certainly isn’t easy to send one’s children out into the world, but that’s been my main goal as a mother – to raise them as warm-hearted gentlemen.”

IRNA MARETA – OUT OF THE BOX

Irna Mareta is a strong, gorgeous, fashionable lady with an impressive track record as a dedicated philanthropist. She has appeared in Prestige on several occasions, most recently in the December 2018 issue, when she was on the cover. In 2011 and again in 2015, the graduate of Switzerland’s Les Roches International School of Hotel Management gave us compelling interviews in which she talked about her rebellious youth, her loving parents and how they guided her, her time spent studying abroad (she attended Hurtwood House, one of England’s top private schools), and about the ups and downs of married life and bringing up two fine children. The incredibly stylish Irna has a growing army of Instagram followers, which shows how adept she is at harnessing the power of social media to inspire people and change lives for the better. “I like to look at styling that is edgy or vintage – a variety of styles, basically,” she informs us. “That’s why I particularly enjoy Prestige’s more out-of-the box fashion shoots.”

Art means many things to many people. For Amalia Wirjono, art means everything, and her life has always revolved around it. “I think I’m blessed that work becomes effortless thanks to the joy I experience when looking at art,” she intones. Indeed, Amalia lives and breathes art. At one time she was the Indonesian representative for Christie’s, one of the world’s most renowned auction houses. She has also worked at Gagosian Gallery, a foremost name in contemporary art, and has been named VIP Representative for the oldest and biggest art fair in the world.
Amalia’s passion for art has brought her to the cover of Prestige twice before, in August 2004 – the magazine’s second issue – where she channelled her inner Frida Kahlo, and then in last year’s Art Issue (May 2018). Amalia was our Socialite of the Year in 2016. “I hope that in the future, Prestige continues to do what it does best and highlight the best that Indonesia has to offer the world,” she says. “I would like to see more articles about women’s empowerment, as I believe that we can become the voice of women everywhere.”

Finna Huang blends business savvy with philanthropy, perfectionism and athleticism. Just read the cover story of our August 2017 issue featuring the Surabaya-born entrepreneur and her inspiring life story. Today finds her just as energetic as she was then. “I like to be doing many things,” Finna begins. “I’m a working woman.” She’s President Commissioner of Sekar Bumi, a producer of frozen food products, including shrimps and fish. She’s also actively involved in Jakarta Women and Children’s Clinic in south Jakarta, which she founded 14 years ago. “Nobody in the family came from a medical background, but I was not deterred,” she says. “There was a market for high-quality medical care for women and children, and I was determined to fill the gap.
“Outside of work, I do a lot of sports. I’m a marathoner, I’m also a triathlete, and I love all kinds of outdoor activities, such as diving and hiking. I also like to cook, as good food and wine are passions of mine. So I’m never short of things to do.” Looking ahead, Finna, the epitome of the strong woman, tells us: “I always have high regards for Prestige from the first year it was launched. The magazine has improved continously over the years, setting the standard of publishing in Indonesia. I believe Prestige will continue to push the boundary and enjoy the great success as one of the leading Indonesia publications.”

When we chatted with Marsha Timothy during her photo shoot for this Anniversary Issue cover story, the actress told us about her hopes for Prestige. “Of course, I wish the magazine to keep shining,” she began, “and to feature even more inspiring women from Indonesia.” It goes without saying that she herself fits perfectly into this category.
For one, Timothy has more than 20 roles to her name, including a noteworthy cameo in the internationally acclaimed The Raid 2: Berandal, and, most importantly, as the female lead in the award-winning hit Marlina the Murderer in Four Acts. Playing Marlina, Timothy was nominated as Best Actress in the 2018 Asian Film Awards and Best Leading Actress at the 2018 Indonesian Film Festival. She won Best Actress at the 2017 Sitges Film Festival, where she was famously nominated together with none other than Nicole Kidman – and won.
Marsha has since added a couple of new titles to her filmography, with at least one more in the works. “I’m about to start promoting a film that will be released in October,” she elaborates, “but what has become routine now is doing workshops for a new movie that will start shooting next month.”
No rest for the weary, it would seem – or the talented and inspiring.