Art collector Alexander Götz introduces Prestige to 101, his gallery where he preserves bits and pieces of Indonesia’s heritage while aiming to inspire Indonesians to better appreciate their culture.

It was a Monday morning when Prestige visited 101, a “space with a mission,” as its owner, Alexander Götz, calls his art space in Kabupaten Badung, Bali. Alexander is an art collector from Germany who specializes in Indonesian works. We talked with him about 101 and about his journey in the art world.

When we arrived, Alexander was standing at the door of the front building. He welcomed us with a bright energy. 101 is like no other art gallery with its Javanese architecture and spacious yard. And that’s only the outside of the complex. There are so many interesting things to find inside the buildings.

“You will now enter a whole new world,” says Alexander as he invites us into the first building, the Geladak. Our conversation starts with him telling us what has been keeping him busy lately. “Arranging the gallery, making publications, and trying to stay in contact with interested people are the main things I’m doing lately,” he says. Alexander then takes us back to the very beginning of his cultural journey. He tells us how his earliest memories of art began at home. “My father was a contemporary artist and my mother was a writer. So, from the moment I was born, you could say I was introduced to various types of art,” he says. “As a young kid, I was rather a revolutionary. I didn’t like that idea at all. You know how it is with most teenagers, they demonstrate and fight against what the old people believe. But I went the opposite way. Later, I was building and sailing wooden boats for a period. That was my first profession, and it’s where my great love for fine wood came from.

“It was only later on, when I arrived in Indonesia and saw the amazing art, old as well as contemporary, that my childhood memories of art came back,” Alexander recalls. He arrived in Bali in 1971 and within a year became interested and involved in the local art scene. In 1972, he started collecting contemporary Balinese art. In 1975, Alexander was sponsored by the Indonesian Institute of Science to do research on contemporary art in Bali.

“I became fascinated by Balinese art the moment I arrived here,” he says. “I was living in Ubud, the centre of the local art world.” Art research and collecting went hand in hand until 1985, when Alexander decided to go back to Germany and put his three children, all born in Bali, into German schools. In 1990, Alexander and his family moved to London. He opened a gallery specializing in Southeast Asian art, with Indonesia as the main focus. After his wife passed away in 2015, Alexander closed his London gallery. His children having grown up and now living their own lives, Alexander came back to Indonesia as a “retired” art dealer.

“Very soon after that, I realised that retirement was way too boring a life for me,” laughs Alexander. “In 2018, the opportunity came along to sign contracts for renovations of all the buildings at 101. The work was completed in 2019, when I opened the doors to show a select audience my collection of Indonesian art.”

Then came Gallery 101, which later changed into just 101. The name is based on the property’s address. Alexander defines his mission with the gallery as to inspire stronger awareness of Indonesian art, while developing “a stronger emotional engagement with the cultural riches of the Indonesian nation”. 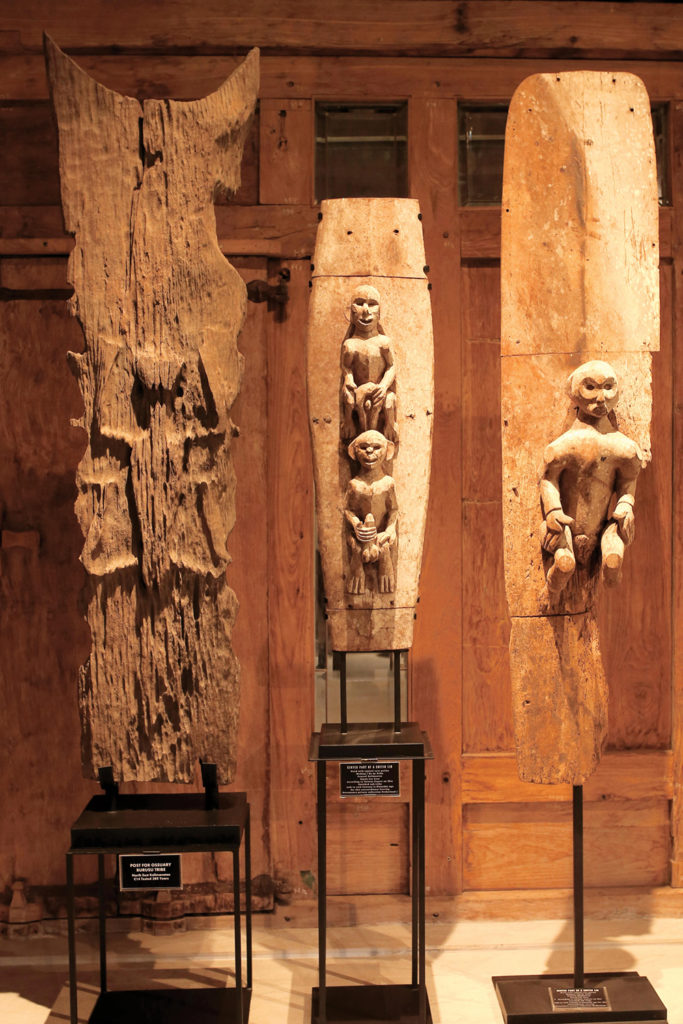 “I continue to add to my collection by buying Indonesian art objects in Europe and the U.S., and bringing all the newly purchased works back to Bali,” Alexander informs us. “A huge number of Indonesian artefacts have exited the country since the beginning of the 1950s. They found new homes in various private collections and museums all over the world. By bringing many of these art objects back home, I hope that Indonesians will enjoy looking at them and that they’ll be ready to help to preserve them within their own country.”

“I’ve built this place to create awareness, because for the Indonesian public in general, culture and history is not really an important topic. So, I try to change that”

What kind of art does Alexander personally enjoy most? “In the general approach towards art, quite obviously the one which is most alive is contemporary art,” Alexander exclaims. “I’m a big sponsor of young talents from Bali, Java, Sumatra, and Kalimantan. So that’s my main interest at this moment. But I’m still also actively searching in the west for Indonesian archaeological objects and tribal art to bring back home.” Wrapping up our conversation, we asked Alexander to express his hopes for the art scene in the future, and to tell us what else he wants to achieve with 101. “As I said, my main goal, why I created this place, is to create an awareness for the Indonesian public, so they could focus more on the art and culture of their country, which is so big,” he answers. “There are many, many different levels. If I have created this energy in 10, 15 or 20 people, Indonesian people – wherever they come from, Jakarta, Surabaya, Medan, wherever it is – and they have understood my message and follow up on it and become collectors, collectors who maybe make exhibitions of their collection, maybe donate to museums, then I could say that I’ve accomplished my dream of creating a conscience for the arts and culture in Indonesia.