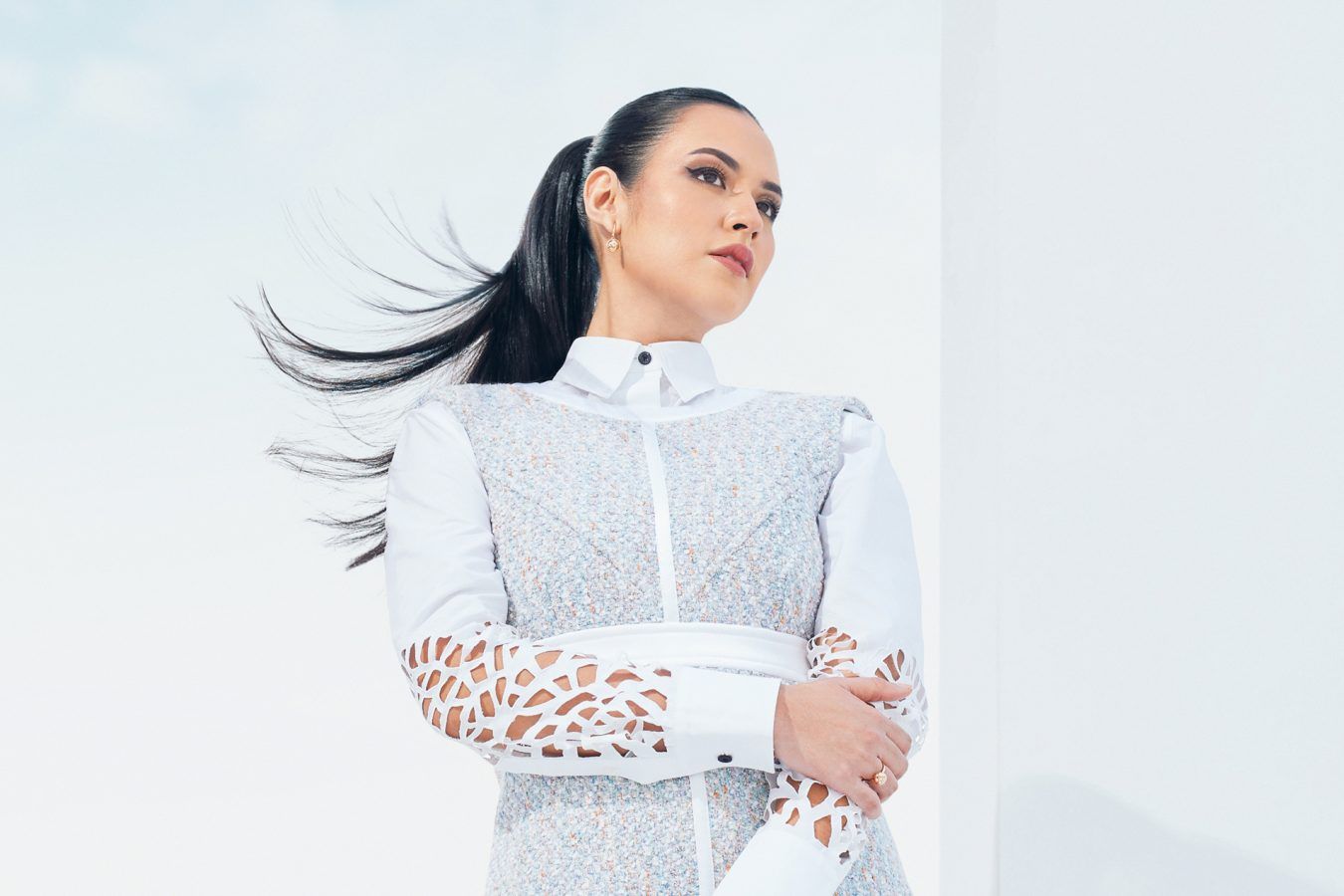 The very first time I had a conversation with Indonesian singer Raisa Andriana – famously known by her mononym Raisa – was last year for Prestige Indonesia’s March 2021 edition. At the time, I found her to be one of the most considerate public figure in this country. But, before we continue, perhaps a short recap might be useful here. We talked about a lot of things last year, including how sad she was that she had to postpone her solo concert that was initially scheduled to be held on June 27 at the Gelora Bung Karno Stadium in Jakarta. It was to be titled “Raisa Live in Concert 2020” to celebrate the 10th anniversary of Raisa’s first single, “Serba Salah.” And it would have also marked the first time an Indonesian female singer performed solo in the stadium.

Unfortunately, as with so many great things that were supposed to happen in 2020, the concert came face to face with the realities of the pandemic. Raisa mentioned that her team had actually planned various alternative scenarios to hold the concert during the pandemic. However, after carefully considering the well-being and safety of everyone involved with the concert, including the concert-goers, it was cancelled altogether. Raisa then posted a video on her Instagram account announcing the news and offering her apologies to her fans. “At the time, I just didn’t want to push too far, because it’s not only about the concert. One thing I learned from the pandemic is the importance of prioritizing other people’s needs over personal interests. So, we prioritized the safety and health of everyone involved in the concert, my team, and the fans,” she shared.

Today, during my second conversation with Raisa amid this photo shoot in partnership with Louis Vuitton, a well-known line by American rock band Journey popped up in my mind: “Don’t stop believin’, hold on to that feelin’.” I felt that it somehow fits Raisa’s journey. The reason why it came up was that a couple of minutes earlier, before the interview started, she posted a video on her Instagram account about the schedule for “Raisa Live in Concert 2023” at the very same place, Gelora Bung Karno Stadium (GBK) in Jakarta, for next year in February.

“We had a dream, a really big one. But like any other dream, to reach it we have to overcome huge challenges along the way. Those challenges are what shaped us today, tougher, stronger, and more motivated. Now the world is healing, and it’s a sign for us to continue and make our dreams come true,” said Raisa and her team in that video, with #RaisaGBK2023 as the final statement at the end of it.

Raisa shares that she and her team always considered the concert to be postponed instead of cancelled, and that one day they will make the dream come true. “Finally, it’s time to make my dream – our dreams – come true!” she says excitedly, opening the conversation. “As a matter of fact, to be completely honest with you, we previously wanted to hold the concert this year. We have never stopped trying since 2020 and we, particularly me, never threw away that dream.”

Raisa continues: “Thank God, what I feel is the support from others. Wherever I go, and whomever I meet, people would tell me ‘We will wait for the GBK concert,’ ‘Never give up on GBK,’ and so on. In a way, I feel like this is not only my dream, as it has already become everyone’s dream. Thanks to this sense of belonging, it feels like a movement, and they’re part of it. Maybe, like me, they also wish and hope for the concert to happen soon, and hopefully, everything will go as planned in February next year.”

Intriguingly, Raisa feels that the postponement of the concert means a chance to make it even better. “If the concert went as planned back in 2020, I wouldn’t have performed some of my newer songs like ‘Love & Let Go’ or ‘Jangan Cepat Berlalu’ from my new ‘It’s Personal’ album. That’s why I think somehow it feels like a blessing in disguise because we’ve grown in the past two years, and now I have this new album,” she elaborates. “So, in terms of the setlist, it will definitely change. And some other aspects, like the concept of the concert, will also change. The fact that we have this shared experience, which is living through the pandemic, all these nuances will touch everyone who comes to the concert. There will be a storytelling element like I always do, but it will be more intimate.”

While it’s certainly a huge update, “Raisa Live in Concert 2023” is not the only new revelation in Raisa’s story. She has a new business venture outside of music: An independent cosmetic brand named “Raine Beauty,” which she created together with her best friend Titania Fairuskha. And, as she mentioned earlier, Raisa also has a new album titled “It’s Personal.” As the name suggests, this album is full of songs that are truly personal and is markedly different compared to her previous albums.

“Don’t get me wrong, I’m still staying true to myself. I didn’t change genres or anything; it’s just the story that’s changed: the experiences, my journey, my point of view across some of the topics, and the story in the lyrics,” she passionately explains. “The album is about a lesson for me about love; about self-discovery. Maybe it sounds more like passionate love on the surface, but right now, it’s more about a deep kind of love – a love that makes me love myself more, love my family, and all that on various levels. I want people that listen to this album to understand that the journey of love doesn’t stop when we settle down, because love is more than that.”

One of the new songs in “It’s Personal” which is very dear to Raisa is called “Jangan Cepat Berlalu.” In short, this is the first song that Raisa wrote about her bond with her daughter. It’s a heartfelt love letter about a deeper understanding of love, an awakening of how time is fleeting, and that one day, there will be a last time for everything. In terms of lyrics, the song talks about cherishing every moment that we have with our loved ones, because those “last times” will come without warning.

“The most special aspect of ‘Jangan Cepat Berlalu,’ which also makes me very happy to be able to have an emotional song like that, is how it frames a certain moment in my life that will never happen again. So, every time I sing the song, I feel like I’m carried away by the feelings,” Raisa happily recalls. “In my opinion, it’s like a godsend, considering I have never planned for a song like that. Uniquely, my producers – which have already become fathers themselves – all cried when they first heard this song during the recording session. We struggled to even finish recording, because 30 minutes into the session, I was crying and my voice became kind of husky.” What’s even more endearing about the song is the way Raisa added a recording made by her daughter, Zalina Raine Wyllie, to the intro and outro of the song.

Another of Raisa’s favourite tracks from the new album is “Love & Let Go.” Lyrically, it feels like a song about putting yourself first, even if it means that things have to change. The only constant in this world is change. It can be amazing, it can be uncomfortable, and even sad.  But sometimes, that’s what it takes to grow.

“This song is the fastest song I’ve created. So, when I composed the music, it took just one take and it was instantly matched by my keyboardist and my producer as well. It feels like a collection of all the references and musicians I’ve listened to since I was little; all of them are incorporated into it and it’s like a song that I’ve been thinking about for a long time,” she opens up. “It was very effortless and everyone told me: ‘Oh, this song is really, really you, isn’t it? Truly Raisa.’”

“I want people that listen to this album to understand that the journey of love doesn’t stop when we settle down, because love is more than that”

As our chat came to a close, Raisa also expresses her hopes that in the current age of social media and instant gratification through brief flashes of content, people who listen to her new album will listen closely to the lyrics. “For me, the lyrics are the soul of the song. So, I will never get bored of inviting people that listen to my album to dissect and analyse the lyrics more deeply,” she concludes with a smile.