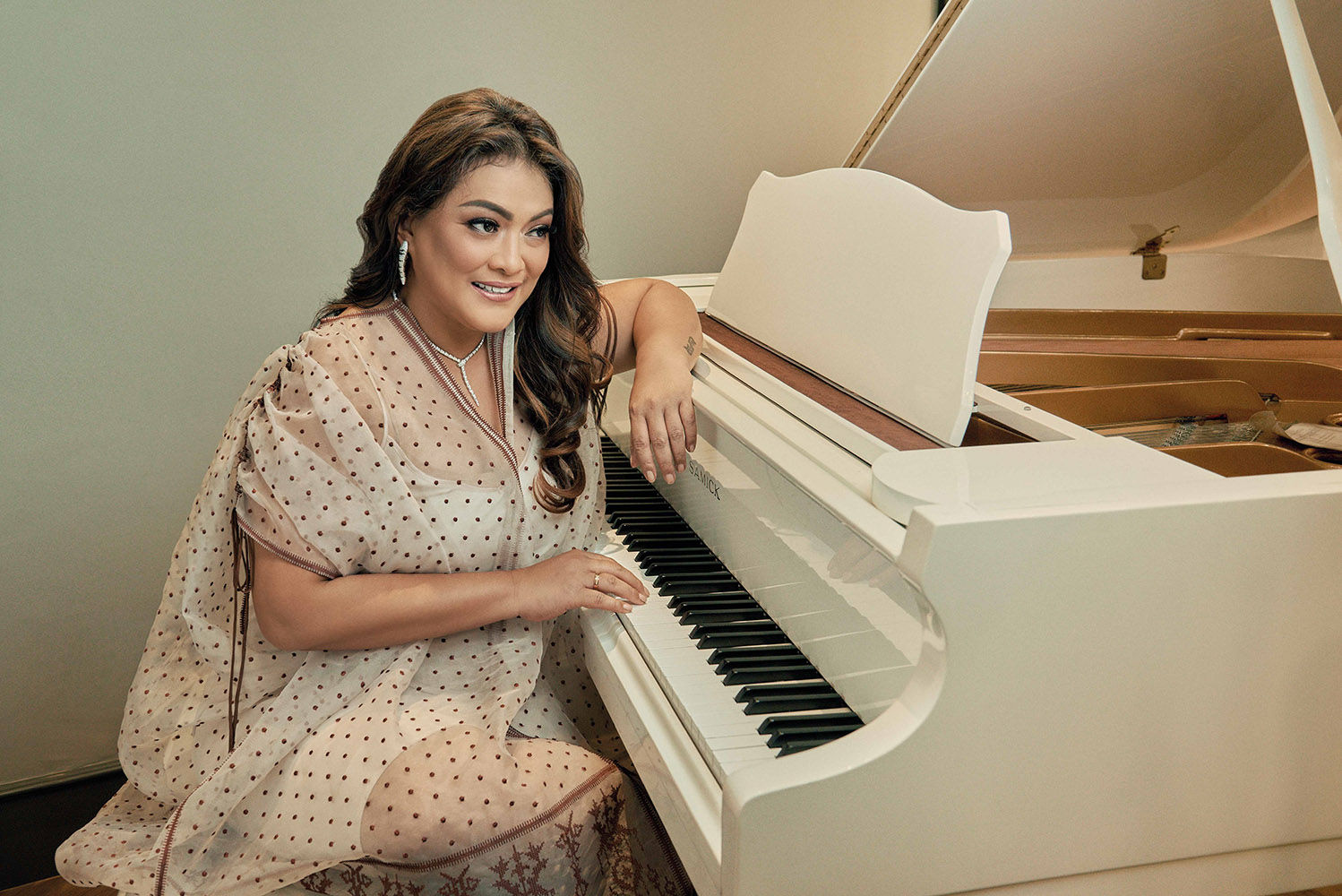 The arts take many forms, including dance performances with shady reputations. Maera Panigoro hopes her production of Srintil: Tembang Duka Seorang Ronggeng will change the way the public regards a great Indonesian tradition.

“I wanted to share the struggles of a woman named Srintil. How she became a ronggeng, and her inner conflict when the tables were turned against her. And also to reassert her dignity as an artist, that this is a heritage that has to be preserved.”

Photographed and interviewed at her lovely home in Kebayoran Baru, the multi-talented Maera Panigoro – singer, actress and theatrical producer – is telling Prestige why she decided to become the Executive Producer of Srintil: Tembang Duka Seorang Ronggeng, a musical monologue about the life of a Javanese traditional dancer. Based on a 1982 novel, Ronggeng Dukuh Paruk, by Ahmad Tohari, the show’s first performances were held at Teater Salihara, South Jakarta., on April 27-28.

“It’s sad that the dancers’ reputation has become negative, because society sees them as prostitutes and cheap entertainment,” Maera declares. “The real meaning of ronggeng is just lost today. If you go to Pantura (on Java’s northern coast), you will see this clearly. The music is no longer played on traditional instruments. It’s disco now, and the dance moves are close to pornographic. It’s just a mess.

“I don’t want to deny that there is sexual content in ronggeng. The dancers have to sell their virginity to the highest bidder as part of a ritual and so there are several sensual moves to it. But the good dancers just have to wink their eye to make the men fall in love with them. How magic is that? But that’s what’s disappearing now. I hope Srintil will change people’s mindsets about this Indonesian art form.”

“The performing arts are the means by which I express myself, how I feel and think through it,” says Maera. “My family has had a big role in influencing my love of the performing arts. My grandfather on my mother’s side is a traditional arts enthusiast. We grandchildren watched wayang orang shows whenever we visited him (in Kendal, Central Java).

“My parents have a huge interests in music. My father loves jazz, especially Duke Ellington. My mother goes for the Beatles and the Bee Gees. My aunt listens to Led Zeppelin and Queen. Traditional culture captivated my attention thanks to my mother’s interest in wayang stories. When I grew up, I started to buy books about wayang orang, and I liked the comics created by R.A Kosasih about Ramayana, Baratayuda, Sri Asih, Siti Gahara and many more.”

Maera’s first experience as a theatrical impresario came in 2009, as the Executive Producer of Gita Cinta: The Musical. She laughs: “To be honest, it was a bit late for me, but it was a case of better late than never, right? Together with Ari Tulang (as Director) and Dian HP (Music Director), we were the first in Indonesia to adapt the Broadway and West End style.

“The three of us decided to watch several musicals in the West End of London, to gather inspiration. And we did really study the performance techniques. Because none of us had first-hand experience of this style, it was quite challenging.

“Back in Indonesia, we decided to present a story that was familiar to everyone. A novel titled Gita Cinta Dari SMA (Love Song in High School) by Eddy D. Iskandar popped up into our minds. It’s a popular story about a high-school romance between Galih and Ratna, two students who excel at everything they do, are popular and receive good grades, and who begin to fall in love with each other.

““It may sound clichéd, but when you are dealing with the performing arts it’s all about feelings. For me, everything has to come from the heart”
“
Maera Panigoro

“Through all the limitations during the process, such as finding the proper venue to perform a musical, finally we found a way to do it. What was also exciting was the enthusiasm among the artists who wanted to participate. We received 600 applications to play 16 roles. That was crazy! It was well beyond what we expected.

“When Gita Cinta: The Musical was performed in 2010, a lot of people loved it. Since then, a lot of new musicals have been put on here, such as Onrop! and Laskar Pelangi. I’m glad that we were able to open the door.”

Next came Ali Topan the Musical in 2011, another success with a formula similar to Gita Cinta. Maera then decided to go for a change of pace. First was singing, as she released an album, Aku, in 2012. Then she started taking small parts in movies: Timun Mas Musical (2013), A Copy of My Mind (2016) and the upcoming Gundala.

In 2014, Maera challenged herself with a new style of musical, Tresna. “For this project, I created my own story based on similar personal experiences with several important Indonesian women, such as Cut Nyak Dien (a leader of the Acehnese guerrilla forces during the Aceh War) and Gusti Kanjeng Ratu Kidul (Queen of the Southern Sea).

“I tried to give audiences another perspective on these women. In the case of Cut Nyak Dien, I made a monologue about when she was exiled by the Dutch to Sumedang, West Java. She was old then and I wanted the audience to know how it felt to be a woman in the struggle for independence.”

“As for Gusti Kanjeng Ratu Kidul, I wanted the audience to think differently about someone who is usually seen as a horror figure – evil and mystical. For me, she is the real meaning of Ibu Pertiwi (Mother Earth) who balances the universe. It’s a story that is close to my heart.

“It may sound clichéd, but when you are dealing with the performing arts it’s all about feelings. For me, everything has to come from the heart. When you make art without any heart or soul in it, the audience can sense it. It doesn’t matter whether you are using big stars in a luxury venue, they will know.

‘The other thing is, James F. Sundah (the songwriter) told me about the importance of attitude. How important it is to respect others, to thank all of the the people who support the performance, even if it’s just the guy who prepares your microphone. Being on time is also something that shows you respect others. If you’re going to be late, even if it’s just a couple of minutes, let them know in advance. This is advice I shall always carry with me.”

Maera’s biggest passion is her determination to revive live theatre in Indonesia. “I want to get people back to theatre. Indonesia’s music industry is doing great, as is TV with its soap operas and shows. The film industry has been going well ever since Kuldesak (Dead End) came out in 1999. Filmmakers like Mira Lesmana, Riri Riza, Rizal Mantovani and Nan Achnas have succeeding in making movie goers go to the cinema to watch Indonesian films.

“But sadly, the theatre still has a very small audience. It’s challenging to work in this area because a production takes months if not a year to realise. And since it’s performed live, you have to be on top of your game for the whole show. Reviving the theatre – that’s become my homework now. Hopefully, one day I can find the solution.”