The Romantic Tale of Richard Kyle and Jessica Iskandar 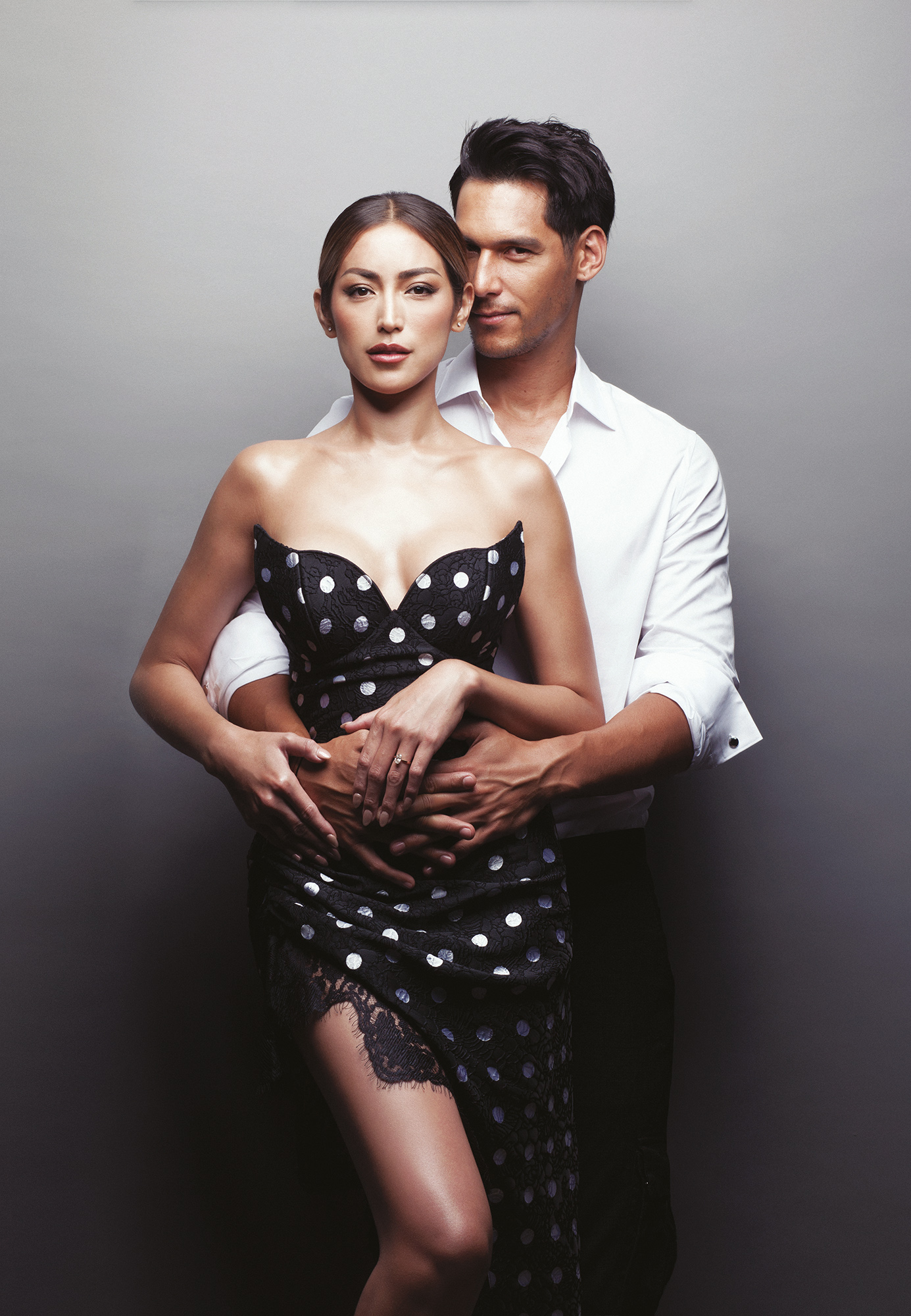 Soon to be married, Richard Kyle and Jessica Iskandar tell Ajeng G. Anindita about their relationship, their recent trip to Australia and how they are handling the stress of wedding preparations.

How do you begin to describe Richard Kyle and Jessica Iskandar’s relationship? Adorable might be an understatement. The soon-to-be married couple came to our cover story photo shoot at TM Studio in central Jakarta with huge smiles on their faces, their team following. They sat down for grooming and make up – a few bits of banter here and there to each other – while taking care of some business on their phones. The couple took turns shooting, before posing gracefully together for the camera. Mid-shoot, we moved to Four Seasons Hotel Jakarta for more photography and an interview session.

We learned that they recently got back from a trip to Australia, which was a long break for Christmas and New Year. “We did a lot of travelling, and we went to Melbourne and Sydney, then back to Melbourne,” Jessica tells us. “It was a wonderful time to spend with the family. We spent Christmas and New Year together, that was lovely. It was nice to meet Richard’s parents and go around Australia. We visited Adelaide as well, and it was so nice to see the ocean.” The couple are very popular on social media. They vlog their activities and holidays together on Jessica’s YouTube channel, which has gained millions of followers.

Her rise to fame in the entertainment industry started as an actress in the novel-based movie Dealova, as the main character, Karra. Soon enough she captured many viewers’ hearts and landed other roles in movies like Diva in 2007, as well as TV series and television movies. She has also hosted multiple TV shows in her career, such as “Dahsyat” and “Pesbukers” (Facebookers) and became a prominent face both on the silver screen and TV. She released a mini album in 2010 and has written two books: Jedar: Jessica is Jessica and Jedar Power: Love, Life, Lord. In the latter, she shared her experiences while expecting her son, El Barack Alexander.

As the years went by, she shifted her career to the social media business, all the while hosting a TV show, “Ngopi Dara”, with her dear friend Nia Ramadhani. Jessica’s latest venture is a makeup line called Jedar Cosmetics, which she launched in 2017. Jessica’s love of makeup started it all. “I love makeup, but I used to get frustrated when I couldn’t find products I needed, so I created those missing things for Jedar Cosmetics,” she explains. “The inspiration for them usually comes from the things I use in my daily beauty routine.”

The makeup line consists of an array of products, including eyeliner, blush, cushion and lipstick to skin care for body and face. It’s available on the brand’s website and at beauty retailers like Sociolla and Watsons. “Hopefully, in 2020 there will be some exciting new products to launch,” Jessica says with a smile. She also has a bakery line, its name inspired by that of her son. Baby El Bakery has outlets across Jakarta, as well as being available to at the online store. “She’s a strong woman, a very successful woman. I believe she has a lot of amazing qualities to lead, to influence others to create and also to give a lot of love. She’s like a gentle soul who has so much to offer,” says Richard while looking at Jessica lovingly.

Richard needs no long introduction to Prestige readers. The model, actor and TV host is known for his passion for environmental conservation, as well as protecting endangered species. Most notably, he works with the Borneo Orangutan Survival Foundation, a non-profit organisation dedicated to the conservation of the Bornean orangutan and its habitat. In an interview he gave us a couple of years ago, he said his interest in saving the orangutan came about because “I believe they’re almost identical to us humans. A couple of my best friends, Niniek Purnomo and Klaus Alexander Woizik, are animal activists. Being close to them when I first moved to Indonesia, I got the chance to work with the foundation.

Last month Richard went into the jungle of East Kalimantan. “It was a really successful mission and we experienced a lot during the time we were there,” he says. “I came back with a small health issue, but I managed to fix that in Australia. All I know is that things are going well there and there are a lot of new conservation projects coming up.”

Although the couple work in the same industry, they come from quite different backgrounds. Richard grew up in Australia, while Jessica was raised here. Even so, he thought she was mixed Indonesian. “I was like, ‘Who’s this beauty? She looks so different from the rest of the crowd’. She didn’t look like a normal girl when I peeked at her from a distance. I thought she was mixed like myself. I thought she was really interesting.” They clicked, and got together some time after their first encounter. Says Jessica: “Right from the beginning I could see that he has a very special heart, he’s very gentle. He is super sweet, smart, fun and loving. What’s most important is that he can blend in with El.”

Differences of opinion don’t break a relationship and while they, like any other couple, have their arguments and their discussions, good communication and a willingness to compromise play a big part in success of their relationship. “Yes, we have traits that we dislike about each other, but it’s okay because everyone has characteristics that can be annoying to others,” Richard points out. “Yes, we argue and stuff, and we have different interests. But they’re just normal differences, and sometimes we agree to disagree about things.”

Talking about things they enjoy doing together, Richard says: “I like spending time with them (El and Jessica), doing something different or trying to explore what’s going on in or outside Jakarta. We are definitely an adventurous kind of family. We try to find fun activities and we definitely love to travel together. Because, like Jess says, travelling is a part of us, we love to get out and explore. For me, I like to bring something new to the table for them to try. I always do that because there’s always a benefit for someone else in exploring and discovering something new.”

During the shoot at Four Seasons, in comes 5-year-old El. This little ball of energy runs to join his mother after finishing his taekwondo practice. You truly can’t help but smile and be in awe at their interactions, especially when looking at how close Richard and El are and how they play around like the best of friends, even joining in a games session after the shoot.

It’s no understatement to say that 2020 is a big year for Jessica and Richard. The couple announced their engagement in June, holding a big party to celebrate at The Ritz-Carlton Jakarta, Pacific Place. They are now busy with their wedding preparations, as well as juggling work in between.

“Genuinely the main key for both of us, because we both are working all the time, and now that El comes into my life, we tend to kind of throw responsibilities back and forth,” Richard says. “When Jess is busy with work, I can take on some of her responsibilities, like her errands. She can also do some for me when I’m busy. It’s actually not that hard, because in the very beginning when I met Jess, it wasn’t just her. Early in our relationship, she introduced me to the love of her life (El). Since then I have been able to hold it and I would keep going to create this family together.”

The wedding ceremonies and receptions will be held in March and April, in Bandung and Bali. “I could say we are 90 percent ready, but it has been quite hectic…” says Jessica. Richard adds: “It has been a roller coaster ride. I mean, nothing crazy. Two weddings mean more guests, more things to figure out. It means a lot of work with the team and having the planner to hang in there while we are both stressed out. It’s just really important so we can calm each other down. But when things get dark, we have moments where we feel like we have done so much, we sorted things out. So far so good, and we keep going with the preparations.”

Wrapping up the interview, the couple share their hopes and dreams for the future. “I hope we can have our first house in Australia,” laughs Jessica. To which Richard replies: “Just that? OK.” They laugh together. “I hope we succeed with our marriage – until death do us part and all that,” adds Richard. “Yes, and the house as well, I hope we can have a home in Australia, maybe also in Jakarta or anywhere in Indonesia.”

Talk to Me About:
people