Through The Looking Glass: The historical journey of French crystalware maison Saint-Louis 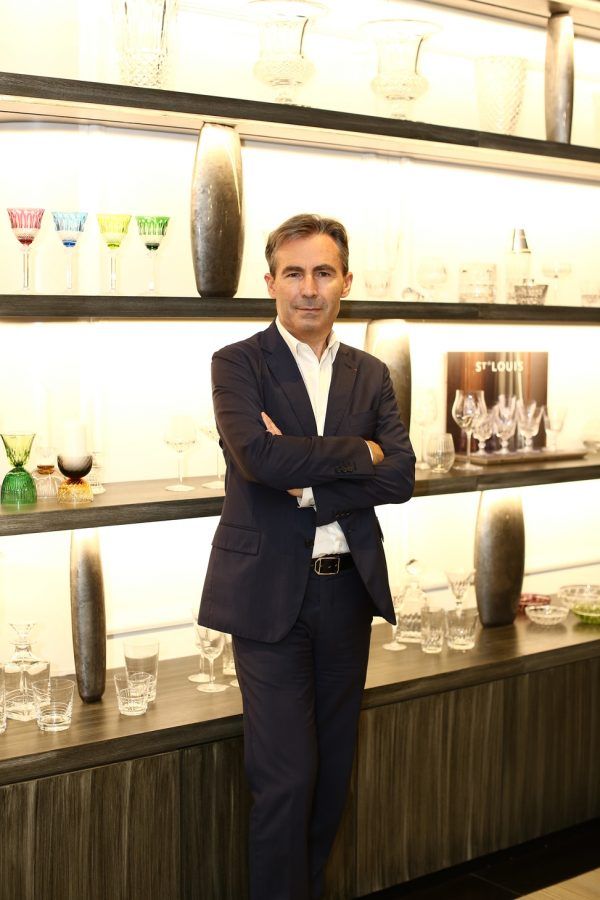 Established in 1586 in France, Saint-Louis is the oldest crystal manufacturer in Europe. Located in the heart of the Münzthal forest in Saint-Louis-lès-Bitche, it is where some of the world’s finest crystal ware is produced. At one point, the maison earned the title Cristallerie Royale de Saint-Louis, which was bestowed by King Louis XV in 1767. And to this day, the Saint-Louis manufactory is still the fiery, beating heart of the village, nestled beside the lungs of the forest.

From tableware to vases to chandeliers and lighting items, Saint-Louis pieces are crafted by master glassblowers and cutters considered to be among the very best in France. During Milan Design Week 2022 in June, Saint-Louis presented Cadence, its new cross-category contemporary collection, a combination of generations of craft expertise and contemporary design that makes a statement with its modernity and simplicity.

More recently, Prestige had the opportunity to chat with the Chairman and CEO of Saint-Louis, Jérôme de Lavergnolle, to learn about the brand and its famed craftsmanship.

How are you doing and what keeps you busy lately?
I’m very well. Thank you. I’m quite busy, especially at the moment. The situation at Saint-Louis is very active. The portfolio of artists that we have at the moment is incredible and the factory is really booming. This is why I’m really occupied. It’s time for me to travel again. For almost two years we had been prevented to do that. Now, I’m on a tour all around Asia.

On that note, what brings you to Jakarta at the moment?
We have distributor in Jakarta. So, for me, it’s very important from time to time to go to the market, to discuss with the distributors, to have a look at the shop, to define what our next plan will be in terms of communication, to think or to check if we have a good assortment of products, and eventually to train them.

Can you introduce us to a brief recap of the history of Saint-Louis?
It’s a very long history. Everything started in 1586. We were located in a small village in France, in the northeast part, in Lorraine, and totally surrounded by forest. The first furnace was located there since we could get everything that we needed at that time for the production of the glass from the forest – such as wood for the furnace. At first it was just glass, and then we developed crystal after.

The first furnace was created and set up in 1586, and we had never moved. We are still located in the same village. Today, Saint-Louis is – of course – much bigger than what it used to be. Now we belong to the Hermès group; we are a member of this big family. We share the same values, in fact. Saint-Louis today is a company that produces tableware, decoration items and lighting. And we sell our products all around the world, including in Indonesia.

What sets Saint-Louis apart from other crystalware maisons?
Besides the know-how, it’s the colours. We have so many colours in our collections. Most of our competitors have more clear crystal products than coloured crystals. The other point is the craftsmanship. In Saint-Louis, it’s real handmade. All of our products are blown by mouth and cut by hand. This is a high level of craftsmanship. And we are also the only crystal maker that you can visit. We have a museum that you can visit, and if you want to visit the entire factory, it is also possible. You just have to give us a call to make a reservation and we will provide you a guide. The guides are the finest people that have retired from Saint-Louis. They used to be workers at Saint-Louis and they are so passionate about their work. When you visit the factory, you can see people blowing, cutting – the overall craftsmanship. That’s what makes Saint-Louis different.

On the brand’s website, Saint-Louis is described as “a blend of tradition and innovation.” Can you elaborate on that?
I think it’s very important for brand to keep an eye of what you had behind, to be very in adequation with your DNA. Saint-Louis has a history and we want to keep that history. We want to represent the past. Not to repeat it, but to invent the future. This is why we always have a link in our new collections with the past of Saint-Louis.

In Saint-Louis, you will find this mix of tradition and innovation everywhere, even in the production side itself. The tools that we continue to use today to blow the crystal are the same tools that we used in the 19th century. The pipes are the same, the objects that we use to shape the mould are the same. No change, no new invention on that. But at the same time, the way we do crystal is much more modern. We use more modern technology which includes the use of electricity or gas that will give much more brilliant quality.

When you look at our collections, there is always a link with out past works. For example, a collection like the Folia. The style is quite modern. Folia was launched four years ago, but in this collection, there is a link to the past, which is the cutting. The cutting looks like a leaf. ‘Folia’ is the Latin word for ‘leaf.’ Leaves obviously come from trees. We want to pay tribute to the forest that surrounds the Saint-Louis factory. When the designer had the idea for this collection, he wanted to do something that will remind us of where we are. An example is the fantastic Folia lamp. You can see the design pays tribute to the forest, using the wood on top, the cutting that looks like leaves, and, at the same time, it’s a modern object since it has a LED inside. So, it’s a good combination of tradition and innovation.

Another example is how we have developed an app that what we call the Configurator. On it, you will find all of our collections. For example, if a customer wants a chandelier and they want to be like an artistic director and imagine something that is designed just for you. On the Configurator, you can see the chandelier from different perspectives, how it looks like during the day or night. This Configurator can also take a picture of your home to see if the chandelier would match well with your interior. This is also a form of innovation. Even if the product can be a little bit traditional – such as a chandelier – the way we present to our customers is very innovative.

What would you say is the most iconic or defining collection from Saint-Louis?
I would say it’s the Tommy collection. What is really emblematic is the way the colours are done, because it’s not painted. It’s really two layers of different crystals; one is the coloured crystal, the other is the clear crystal. Even if it is a collection from 1928, the Tommy is still our most emblematic collection. It is still number one by far, all around the world. The funny thing is, for almost 10 years, this collection had no name at all. Then in 1938, the President of France, Mr Albert Lebrun, invited King George VI – the father of Queen Elizabeth II – to the castle of Versailles close to Paris. Each guest had in front of them nine glasses from this collection. The King asked: ‘What is the name of this?’ We decided to name it ‘Tommy’ to pay tribute to the British soldiers who serve during the first World War – because they were called ‘Tommy Boys.’

This time, we wanted something a little bit modern. So, we asked Pierre if he could do something for us. Normally, Pierre is someone who plays with colours. And interestingly, the Cadence collection has no colour, only clear crystal. We call it ‘Cadence’ because Pierre likes – when he works on objects – to use vertical and horizontal lines. And when you look at the cutting of the collection, it has two types of lines, vertical and horizontal. It’s like a music score. Music scores have horizontal lines and the musical notes are the vertical lines. And ‘cadence’ is like a rhythm. If one day you visit the Saint-Louis factory, you will see how the glass-blowers working together looks like a ballet performance. They work in rhythm. We want to keep that rhythm. This is why we call the collection ‘Cadence.’ It’s a very contemporary collection and it’s absolutely fantastic.

Does Saint-Louis have any upcoming projects that you can share with us?
We just launched Cadence in Milan, during the Salone del Mobile. It’s a very important fair and we have a showroom there. Next, we plan to continue to launch the Cadence collection country by country, as we continue to enlarge our network for distribution. We also just launched a wonderful store in Riyadh, Saudi Arabia. And next year, we will have our first standalone store in Tokyo. 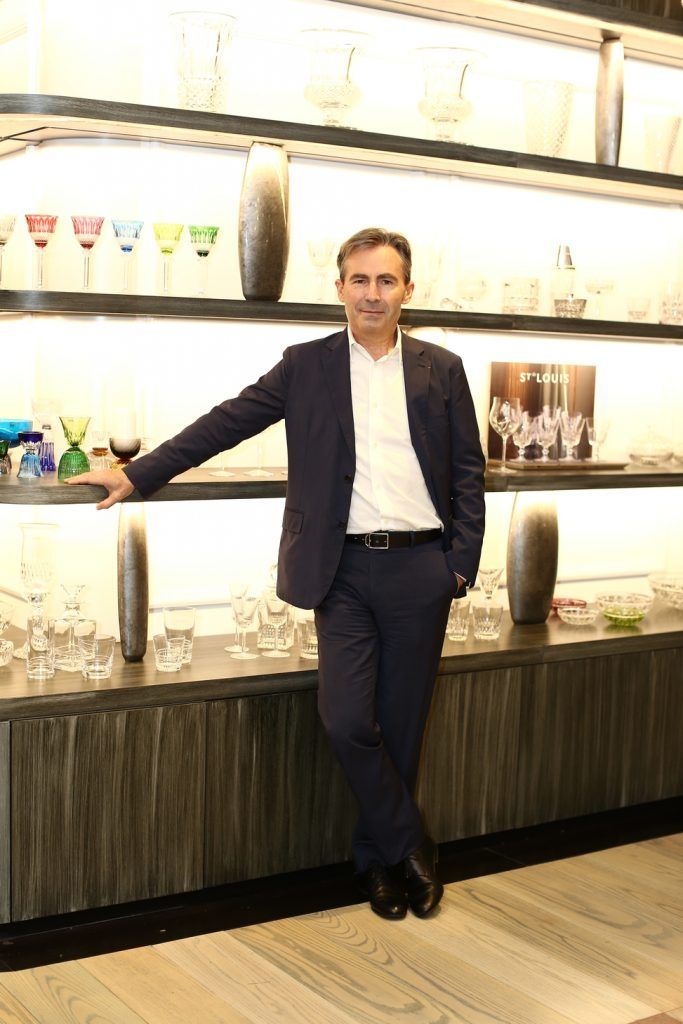