Trailblazers of Tommorrow: Exclusive Chats with the Next Generation of Movers and Shakers 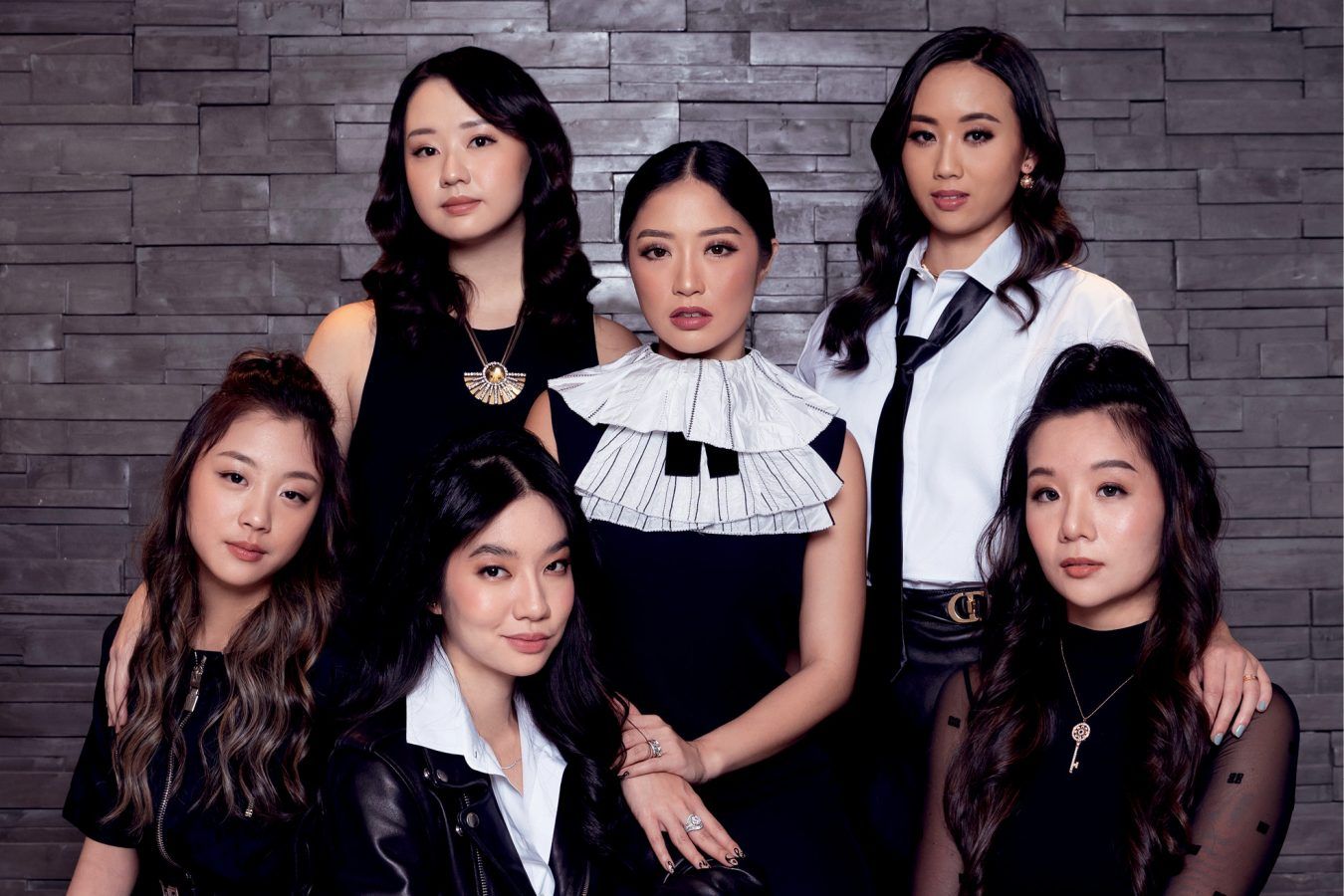 People & Events
Trailblazers of Tommorrow: Exclusive Chats with the Next Generation of Movers and Shakers
Share
Next article

A sustainability analyst, a doctor, a brand representative, a product technologist, an actress and producer – these are the next generation of movers and shakers that will push the nation ever forward in an increasingly global landscape

Deeply passionate about technology, Claudia Gusti is pursuing a master’s degree in computer science, specialising in artificial intelligence, at Loyola Marymount University in Los Angeles, California. Between studying and working, Claudia has secured a position at a cyber security company in the United States and previously graduated with a marketing degree. Her love for technology is rooted in her passion to help people. “With technology, I feel like I have control and the power to make anything I could ever want. I’m really driven to help people and make a good impact on this world,” she says. Furthermore, Claudia also mentions her father as her source of inspiration. “My dad is my biggest mentor,” she says. “He is the hardest worker I know yet he always remains humble.”

Claudia, daughter of Rika Pauzie and Heru Gusti, is also quite the virtuoso and she produces music as a hobby. “I’ve produced music, I released music. I love listening to EDM, dubstep,” she elaborates. Furthermore, Claudia has been in the music industry for two years, working with the likes of The Lumineers, Justin Jesso, Quincy Jones, and Jacob Collier. In the future, she aspires to work at Google Creative Lab to further her career in technology and make great changes in the world. “I want to make my life as useful as I can be for other people, as impactful as I can be,” she concludes.

After graduating from Ravensbourne University in London, 23-year-old Angel Aprilia began working at Melandas Furniture. Having majored in fashion buying and brand management, she initially joined the marketing team of the company and is now a representative. “Basically, after graduating, I started working at my uncle’s company. I learnt so much because that was my first time being exposed to anything related to furniture. It’s fun,” says Angel.

Despite her current position, Angel realizes that she has always been into fashion and subconsciously followed in her mother’s footsteps. “In some ways, I follow my mom. She studied fashion at university, and that’s what I also took. After she graduated, she also worked in a family company,” she recalls. Angel, daughter of Juli Chandra Supardjo and Rezki Fonda, also sees a connection between fashion and furniture – both can tell a lot about one’s personality. And just like fashion, furniture forms a dynamic part of one’s lifestyle, she observes. “People might want to change their furniture every once in a while,” she mulls.

In pursuit of her dreams, Angel expresses her wish to head to London and learn about the basics of interior design, which she finds perfectly in alignment with her current career path. “It will be helpful for my career. That’s what I feel like I want to do and I’m excited to do,” she says. As her ultimate goal for the future, Aprilia aspires to lead her own company which embraces both furniture and fashion through a unique and fun concept.

As a young but established actress and producer with a few different creative projects under her belt, Abby Latip reveals that actually, she didn’t initially set out to establish a career in film. When she was growing up, it simply didn’t seem feasible. “I studied Sociology and Urban Studies in university, not film. But I’m on this career path now because I’ve always loved stories and film and people. So, after graduation, I pulled a 180, moved to Los Angeles, and jumped in headfirst into the industry. It was probably one of the best decisions I’ve made in my life. At the time, though, my friends and family were surprised. Honestly, I was too,” she opens up excitedly.

Despite that, Abby has always strived to work on great projects with great collaborators to tell great stories. During the pandemic, she worked on a few of these projects that are out in film festivals all around the world right now. “I produced a sci-fi pilot directed by Soma Helmi back in October that just premiered at Balinale [the Bali International Film Festival]. It also just got accepted into the Academy Awards/BAFTA qualifying LA Shorts International Film Festival. It stars Yoshi Sudarso, Lulu Antariksa, Miki Ishikawa, and Peter Sudarso, and tells a story that bridges Indonesian and American culture.

Many of us on the cast and crew are all super proud of it because we feel like we straddle the two cultures as well,” she explains. “Another project that’s making festival rounds is a short I produced and acted in with Christopher Quyen called Voice Messages. Besides that, some of my recent acting work got praise from executives at studios like Disney and Sony Pictures Television. I’m also excited about my other projects coming out this year, but I can’t talk about them yet.”

In the end, Abby, daughter of Kristianto Latip and  Jacqueline Tjahjadi, concludes: “I don’t have a specific dream job. I think it’d be cool to work on a genre project or a romantic comedy, but at the end of the day, I just want to create something challenging, fulfilling, and impactful.”

Callista, daughter of Jimmy Bachtiar and May Farida, also shares that one of her role models, a nature writer Gary Ferguson, taught her about the importance of nature and how we are all interconnected to our natural world. On that note, she wants to educate the public about contemporary climate issues in Indonesia. “Besides working as a sustainability analyst, I’m also trying to be active in local environmental organizations here in Indonesia to raise awareness about the importance of preserving our environment for future generations,” Callista happily explains. “I want to leave this world knowing that I have made a significant contribution to Indonesia’s sustainable development.”

She then continues: “But someone once mentioned that while you can reach for the stars, don’t expect to reach the stratosphere. So, it’s always good encouragement for me to dream big and try and achieve or have a huge goal, but I shouldn’t sort of set my expectations too high because ultimately it’s not about trying to prove myself to the world, it’s more about what I’m capable of doing, and whatever milestones or whatever achievements I reach, it should be enough. It should be enough for me and hopefully the people that are impacted by my actions.”

As a woman and a businessperson, Jean Claudia believes that childhood moments are important in determining one’s personality later in life. Especially now, being older, having grown up, and matured quite a bit, she realised how important her childhood was – especially having a circle of family and people that are loving, caring, motivating, and inspiring as well.

“I think having a good childhood means a lot to me, especially now that I’m married,” Jean opens up. “Also, I kind of like to rewind to what mom or my dad taught me or how they would give pieces of advice and things like that.”

Jean, daughter of Robert and Priscilla P. Handajani, also shares that when it comes to her work and business, she doesn’t really see herself as having fixed targets or goals. “I would just take my time, and focus on myself,” she elaborates. “And with that mindset, I think I can reach further than I would do by looking outwards. I really love taking my time. Sometimes, people would say how it’s not your time yet, so just be patient. That’s what I’m trying to apply as my philosophy these days.”

In the end, Jean really wants to step inwards and focus on herself instead of focusing on what others accomplish. “I’m always focused on myself and see how I can go further with that and more into what I’m being exposed to. I don’t think too much about who’s cool, who’s not, who’s a good role model, and so on. When it comes to role models, I focus on how I can become one and how can I further myself by being one,” she happily elaborates.

Ivanna Ingrid Aliman, daughter of Eddy Aliman and Agnes Ingrid Kurniawan, is a woman on a mission. Despite coming from a family of business people, Ivanna had always known in her heart that she wanted to become a doctor. On that note, she is currently busy as a Co-Assistant Medical Doctor at Siloam Hospital. She reveals that after finishing her co-assistant program in 2024, she will do a one-year internship, and after that, she plans on taking a specialist program. More importantly, she also mentions that she would love to have her own practice and own clinic one day.

“Right now, I’m interested in OB/GYN,” Ivanna explains. “I feel like the state of reproductive health for women in Indonesia is still very underdeveloped, and it’s still very limited. I feel like we can do more to improve that.”

She continues: “And I feel there aren’t many women in the field of obstetricians and gynecologists in Indonesia, which I think is also something that is quite needed, actually. Not a lot of female patients are willing to open up to male doctors because they don’t feel comfortable. So, I think that’s something that needs to be addressed.”