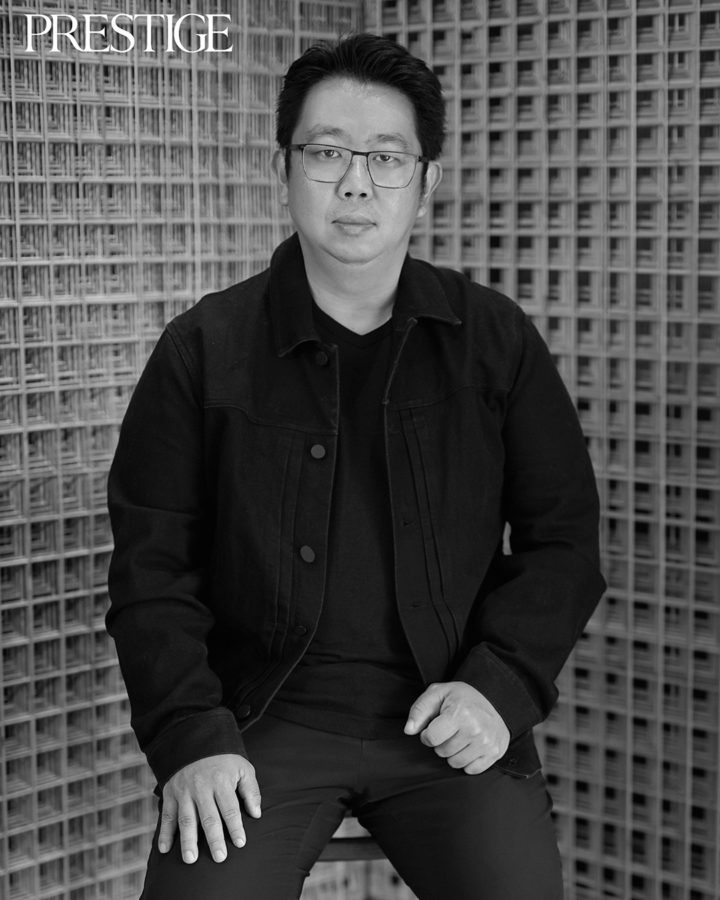 Weaving the Future: An Interview with Lim Masulin

People & Events
Weaving the Future: An Interview with Lim Masulin
Share
Next article

There’s something that always caught my eye these past few years every time I visited architecture and art exhibitions, or even hotels, offices or restaurants: weaving. And when it comes to weaving, one name that now stands out with intriguing creations is Byo Living and its founder, Lim Masulin. “I can say that weaving is the most flexible craftmanship,” he says with a grin. “Because if you are working with iron or wood, you will be stuck with something heavy that will one day rust. Weaving, on the other hand, is something that can be used for everything from day-to-day goods such as furniture to fashion, art and architecture.” Byo Living was established back in 2008, and is now known as a leading design customization company that specializes in weaving and craftsmanship innovation for energy-efficient design and architecture. Back then, Lim discovered that the best products of several global brands were actually made in Indonesia. “Many people acknowledge Paris and Milan is the centre of the trend. One day, I was sent by ASEAN to attend Salone del Mobile Milano and I asked myself, why are flying all the way to Europe just to see the Europeans using Asian or Asian-inspired technique?” he ponders. “All this time, we were being noticed but we were not confident enough. They can see our beauty but why can’t we?”

Having observed the way objects tend to be appreciated in terms of design and materials, Lim decided to see technique and craftmanship. “I was thinking what if we focused on the know-how? There’s beauty inside the simple things because what makes it attractive is not that it has the grandest design or uses the most expensive materials, but it’s about the craftmanship.” Realising how vast the world of local craftsmanship can be, Lim decided to focus on developing and mastering weaving techniques. It was, in fact, quite a huge step as weaving allows for multidisciplinary functionality and opens up various possibilities in terms of sustainability. Taking this leap of faith – which meant a lot of research as well as trial-and-error – culminated with Lim being invited as a speaker at House Vision Tokyo in 2013. Through discussions with Japanese graphic designer Kenya Hara and fellow architects such as Yanto Effendi, Heru M. Prasetyo, and Andra Matin, about the future of Asian housing, he and Byo Living decided to bring back weaving into modern architecture. “It was shocking, but then we are the first company in the world who can create a wide-ranged architectural language through weaving.” 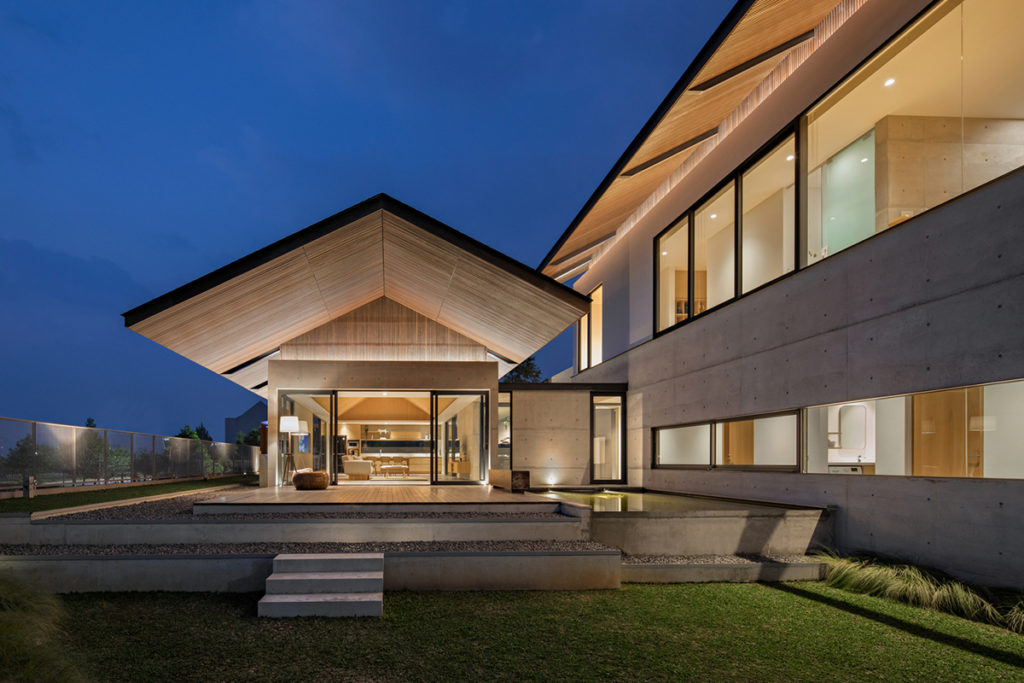 Our chat then turned towards sustainability. “Since the beginning of Byo Living, we knew that weaving can be the answer to many environmental challenges,” Lim expresses. “Can you imagine if a building uses thousands square meters of weaving? Beside using a lot of resources, people may not realize how it can help cool down the building. As the population grows every year, we don’t want consumption to run out of control and for us to produce even more waste. The more we can utilize weaving into a building’s construction, the more we can reduce energy usage.” This idea proved to be effective in a project for a state-owned corporation which went on to become the greenest building in Asia. Besides keeping the building’s temperature down, Byo Living also used recyclable materials. “100 percent of the materials were sourced from plastic waste that came from public consumption.”

Realising the huge potential of upcycled/recycled waste, the fan of Frank Lloyd Wright and Alvar Aalto created a dedicated team of architects for research and development. “We are a research-oriented company and for several materials we are able to produce it in-house,” Lim elaborates. “Other companies have subcontracted their production, but we are still hands-on. As craftsmen, we couldn’t stop thinking about technology and the future. Recently, we found that there’s a leather-like material made from mushrooms and it was produced in Bandung. It is in our list of alternative materials.” He continues: “As I mentioned earlier, the versatility of weaving means we can build using various materials, from paper to rattan to plastic waste. The company is currently developing optical weaving technique as we realised that there are a lot of waste materials that have a translucent effect. Then we were approached by a Dutch architecture firm called O M E who has worked on the Potato Head project in Bali. They asked if it was possible to use translucent material in their architecture plan? So, we came up with a recyclable material from Sprite plastic bottles.” Interestingly, there was a surprisingly in-depth thought process behind this idea. Lim explains: “The love the green colour of Land Rovers. So, for the aesthetics of this project, we married the vintage green hue with a retro touch. A lot of people, including the architect, were sceptical, but the result was astonishing. It took us six tons of Sprite bottles, which is certainly a massive amount. It’s a smart way to build a building using the post-consumer waste.”

“If we don’t have the right mindset, it will be difficult to break the boundaries of the highest aesthetics. We will be forever trapped in the same definition, the small mindset that we’ll never be on the top”

Of course, getting to this point wasn’t an easy ride for Lim and his company. “There is this mentality that anything made in Asia is second class while Western-made products are more appreciated. It took courage to say to ourselves that there is a greater potential worth exploring here. If we don’t have the right mindset, it will be difficult to break the boundaries of the highest aesthetics. We will be forever trapped in the same definition, the small mindset that we’ll never be on the top.” As a case in point, Lim mentioned the holographic works in Andra Matin’s Elevation that was showcased at the 16th Venice Biennale and ended up as one of two Special Mentions by the jury. “The inspiration came from Dayak weaving technique and it looks flat on the front but there’s depth when looked at from the side. Its appearance in Venice shook the world at that time. Throughout the exhibition area, everything looks very industrial, modern and cold. Meanwhile, from Indonesia, we are presenting a sense of humanity with its hospitality, warmth and closeness to nature. There’s a real anti-thesis and it starts from the courage to tell ourselves that we can.” Nevertheless, those innovations resounded with many prominent figures in the world of architecture, and the likes of Kengo Kuma, Thomas Heatherwick, and Norman Foster came to Byo Living to inquire about the possibilities of weaving.

From building façades to ground-breaking home design without walls that uses only sudare screens made from local rattan as partitions, weaving seems more and more like a major part of future designs. Lim agrees with this notion, but he doesn’t want it to sound too heroic. “Weaving has existed since pre-historic times and it’s been the modern solution since ages ago. I don’t know why, but in the end of the 1800s and beginning of 1900s when there was this huge wave of industrialisation, weaving was regarded as something traditional, and exotic.” So, it is time to normalise weaving again. “I think there’s something wrong in the modern context. The proper technology in architecture which relies heavily on computational technology is something that we have normalised. There’s nothing wrong with it, but it must be done in moderation. Weaving is not something new, but because we at Byo Living are able to make it properly, it is seen as something spectacular. But actually, the nature of weaving is beyond boundaries.” Lim then adds: “If we are looking at brands such as Hermès, John Hardy, and the top chefs in the world, if we want to dig deeper, what changes culture is process. It takes time to learn, to fix and modify. Some people might ask are we going to be a hyper specialist? For me, the future of design is to be hyper specialists because we can’t stop working on the surface. It takes depth and process in mastering things. This is a continuous journey and I’m always excited to look forward.”