Finding a career mentor can be quite a challenge, especially for fresh graduates – and doubly so for many women. Enter WomenWorks. Windy Natriavi, co-founder and Chief Lady Boss of the social platform and Fransiska P.W Hadiwidjana, co-founder and CTO are extremely aware how a lot of women are struggling with this problem. “That’s the reason why this platform was born” opens Windy. “Actually, I’m also leading my own start-up company, AwanTunai as the CPO. The story is that one of my team members – who is a very dedicated, loyal, and smart woman – suddenly resigned not long after we made our major sales project. It was quite surprising for me because I thought she was going to ask for a raise. Turns out, she went through certain issues with her personal working conditions. At that time, as her leader I tried to solve the problems but unfortunately, I couldn’t keep her.”

Fransiska, meanwhile, has her own story. “I started my career in 2012 and in the years I’ve worked as an engineer, I never had a woman mentor before. Most of my mentors are male and I feel there are certain issues that would be easier to discuss with another women. The fact is, the higher you go up the career ladder, the more difficult it becomes to find women leaders.” This is especially true in a traditionally male-dominated world like engineering. But, Fransiska knows that there is a lot of potential for women to grow. “In my previous job as Head of Engineering at Mamikos, among 90 engineers, there were only 10 women on the team. Back when I was in college in ITB [Bandung Institute of Technology] 20 percent of my class were women and after we graduated, the number of those who became engineers was even lower. I think that having a role model is important in paving our own career paths and that’s why I decided to become involved in WomenWorks.”

So, WomenWorks is a tech-connection company that provides a platform for women to connect, empower each other, and reach their fullest potential. Its mission is to build meaningful connections for women to achieve their career-oriented and personal development goals through mentorship. WomenWorks does that by arranging for mentors to meet their mentees through online activities.

“We offer a couple of programs that participants or mentees could try. First, is the 1:1 Mentorship. You can sign up through Google Forms or our mobile application,” explains Fransiska. “Then you will be asked to fill in a form, create an audio or video intro about yourself, also define a pre-mentorship goal. We will guide you on how to set up a six-month goal and how to achieve something concrete. Once you’ve filled everything in, the algorithm and our team will match you up with one of the mentors. Afterwards, you will get an email introducing you to the mentor, and vice versa. We’ll share the profiles of the mentor and mentee, plus the pre-mentorship sheet to make sure the mentor is aware what the exact goals to be achieved are. The mentor will have access to a Calendly account for scheduling; the mentee simply needs to book the sessions.”

“A lot of people focus on their fears. But they don’t spend as much time thinking about the upsides”

Windy then continues: “Second, we have the masterclasses. This is made for those who want to experience our environment, the topics, as well the mentors. Today we have 10 masterclasses. These were introduced because many people who want to take a 1:1 Mentorship are not sure where to start. We also offer 15-minute sessions with our mentors for free. And third, we have a hybrid between masterclasses and mentoring for groups or individuals in a corporate context.”

This, by the way, might be a good point to rewind a bit to when Fransiska and Windy first came with the idea for WomenWorks. The two friends met when they were still in college back in 2010 at the YLI [Young Leaders for Indonesia] program by McKinsey Indonesia. Windy, who was a finance student at the University of Indonesia and Fransiska, who was an informatics engineering student at Bandung Institute of Technology, quickly got along during the program and afterwards.

“When I first started this, there were many female communities out there. During those early days, I was struggling to manage the system, but then I had a conversation with Fransiska and, somehow, we found that we were looking in the same direction. We realised that our experience at YLI was a privilege, and not everyone had the chance to experience it. But just because you didn’t go there, doesn’t mean that your ideas should be limited,” said Windy. “Everything was done manually at the time, so I thought that we wouldn’t need any fancy technology to begin with. Of course, it’s important to always improve. In the early days, our focus was on how to get back to users on time. We started with Google Sheet and Google Form, then we began to work on automating the e-mail system and payment while sorting out all manner of problems with the system. Once everything was settled, we continued with a mobile application to increase engagement with our users. The technology we use is multiplatform and it’s integrated with our website as well,” explains Fransiska.

Today, more than 250 “Lady Bosses” have signed up as mentors with WomenWorks. Since last year, more than 500 sessions have been booked by 300 mentees as the platform has also started collaborations with four Indonesian start-ups.

While running WomenWorks, Windy and Fransiska noticed several common career needs and challenges faced by quite a few Indonesian women. “Situational factors are the most common. For example, having children. Women are several times more likely to do unpaid care work. Then, it’s connection. This applies to a wide range of jobs, from office work to freelancing. Why? When we take a look at the number of graduates in Indonesia, the ratio between men and women is pretty equal. But in the field, the number goes down for women, and it gets even smaller when we look at upper management,” Windy elaborates.

“From my perspective, there is also an issue with confidence and achievement. I remembered a coding class in a remote area and I noticed that the male students were looking decidedly confident while the women seem unsure. But when the results came in, it was the women who scored higher. Women, by default, struggle to acknowledge their achievement,” Fransiska expresses. “I would say that women need more real experiences and the collective knowledge from those who have been in leadership positions – how they face problems and how they achieve their goals. WomenWorks wants to provide these intergenerational insights; to connect women entering the workforce with the right mentors.” 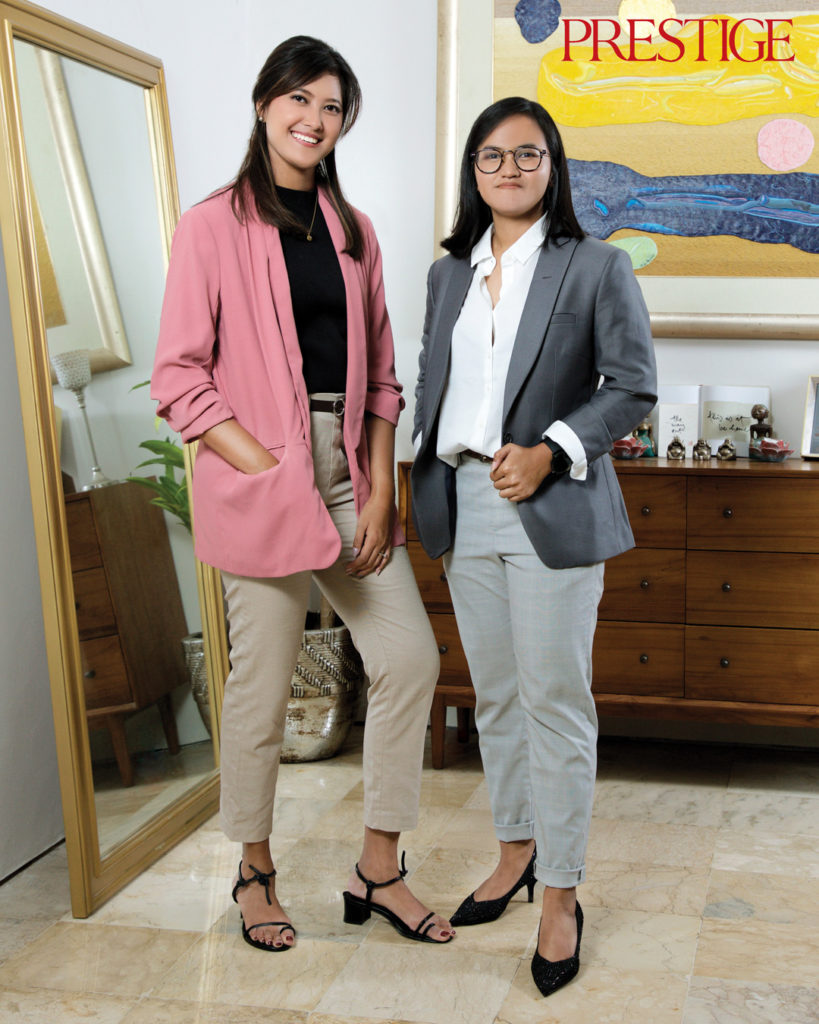 It goes without saying that Windy and Fransiska are two driven people. Which works great for their working dynamic as they have different personalities and leadership styles. “I would say I’m very blessed that we complement each other. It’s been very fun so far because I look at things from the product angle, while Fransiska sees things as an engineer,” Windy explains. “You know how sometimes, when you have an engineer among a company’s co-founders, most likely they only focus on their expertise? But what makes it interesting is that she is an entrepreneur as well, so we can always talk business.”

Fransiska, in turn, feels pretty much the same. “I learned a lot from Windy and admire her leadership style” she says with a smile. “She is very driven and always pushes us towards our goal. She really helps people get their work done in a happy and empowering way. This is also the reason why many so people join us as volunteers. She is amazing in how to make people take the mission as their own.”

Of course, the kind of support that WomenWorks offers is something that people need to seek out first. And a lot of people may have doubts about looking for help. On that note, Windy and Fransiska’s advice is to just give it a try. “The first step is never easy, but if you don’t take it, there won’t be another step. Having confidence and believing in yourself can help you get through anything, including in the mentoring session because it helps the mentor to help you get closer to your goals,” says Fransiska. Windy then adds: “A lot of people focus on their fears. But they don’t spend as much time thinking about the upsides. When you hear about someone who wants to switch careers or start a business, it always begins with the question, ‘What if I fail?’ We rarely hear, ‘What if I can make it?’ I think we need the proper mindset in order to change. And lastly, live your life.”

Pursuits
By Diandra Soliano
Sign up to get the latest luxury and lifestyle news delivered to your inbox.
Liviani Putri
people