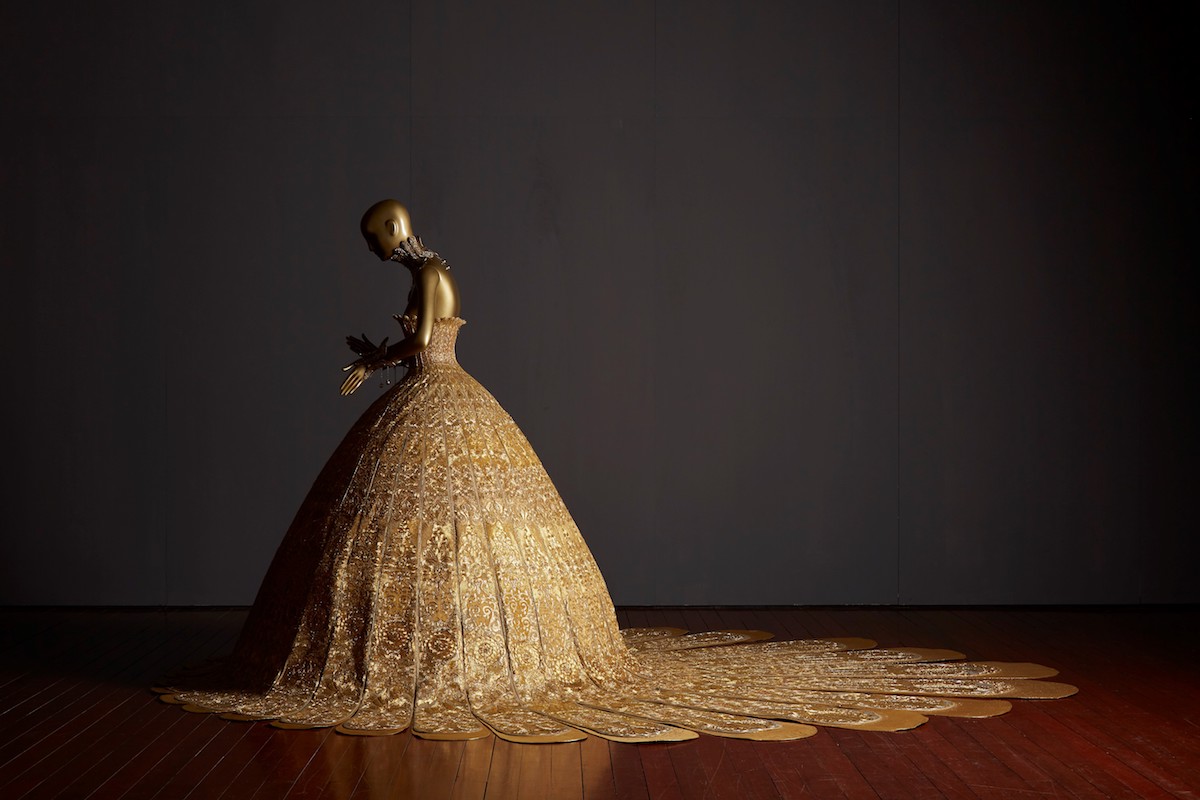 It’s the dress that inspired a thousand memes. Canary yellow, and fox-fur trimmed, the robe turned heads everywhere at the Met Gala in 2015, where it adorned the shoulders of Rihanna. The brainchild behind one of haute couture’s most iconic gowns is Chinese couturier Guo Pei.

For those hoping for an up-close look at the iconic dress, you’re in luck. It’s now on display at the Asian Civilisations Museum (ACM) as part of a collaboration with its Season of Chinese Art series, which explores how Chinese art, aesthetics and traditions are reinterpreted for today’s contemporary world. The dress dramatically greets visitors at the entrance, and is one of the 29 gowns showcased as part of Guo Pei: Chinese Art and Couture.

The exhibition highlights the juxtaposition between Chinese historical art and the designer’s contemporary works. For instance, her 大金 (Magnificent Gold) dress from the Gold is the Colour of my Soul section is made with elaborate embroideries, similar to those used to produce thangkas (paintings or embroideries on scrolls) that often showcase Buddhist deities and scenes. In China and the World, her sculptural 青花瓷 (Blue-and-White Porcelain) dress features the classic Chinese patterns of flowers, crests, and clouds seen on blue-and-white porcelain and is applied with the same brush painting method and blue pigment.

“In this exhibition, fashion and history come full circle. We see how the past inspires the present, we see how traditions are revived and rejuvenated, and we see how export objects and foreign ideas influence the local.”
Exhibition curator Jackie Yeong

The exhibition is the first fashion-focused one for ACM. Director of Asian Civilisations Museum and Peranakan Museum Kennie Ting explains that the aim is “to make a point as to how heritage and tradition are very much relevant to the contemporary; that heritage and tradition can be remarkably sexy and alluring… The exhibition has been designed to give visitors a simple and visually arresting overview of Chinese art history – imperial art, export art, and folk art. We wanted a show that would introduce visitors to aspects of Chinese art – materials like silk and porcelain, the craft of embroidery, motifs like peonies and phoenixes – in a completely unexpected and, hopefully, very memorable fashion.”

All photos are courtesy of the Asian Civilisations Museum, 1 Empress Place, Singapore 179555

People & Events
By Manas Sen Gupta
Sign up to get the latest luxury and lifestyle news delivered to your inbox.
Nafeesa Saini
Features Editor
Nafeesa straddles both the print and digital Prestige publications, helming the features and lifestyle section. While storytelling is her core passion, she spends her free time looking at home decor inspiration, working out, and nursing copious amounts of coffee.
travel beauty Wine and Dine Women's Fashion Wellness culture

5 Best Haute Couture Collections That You Can Actually Wear

Style
By Maya A. Siregar