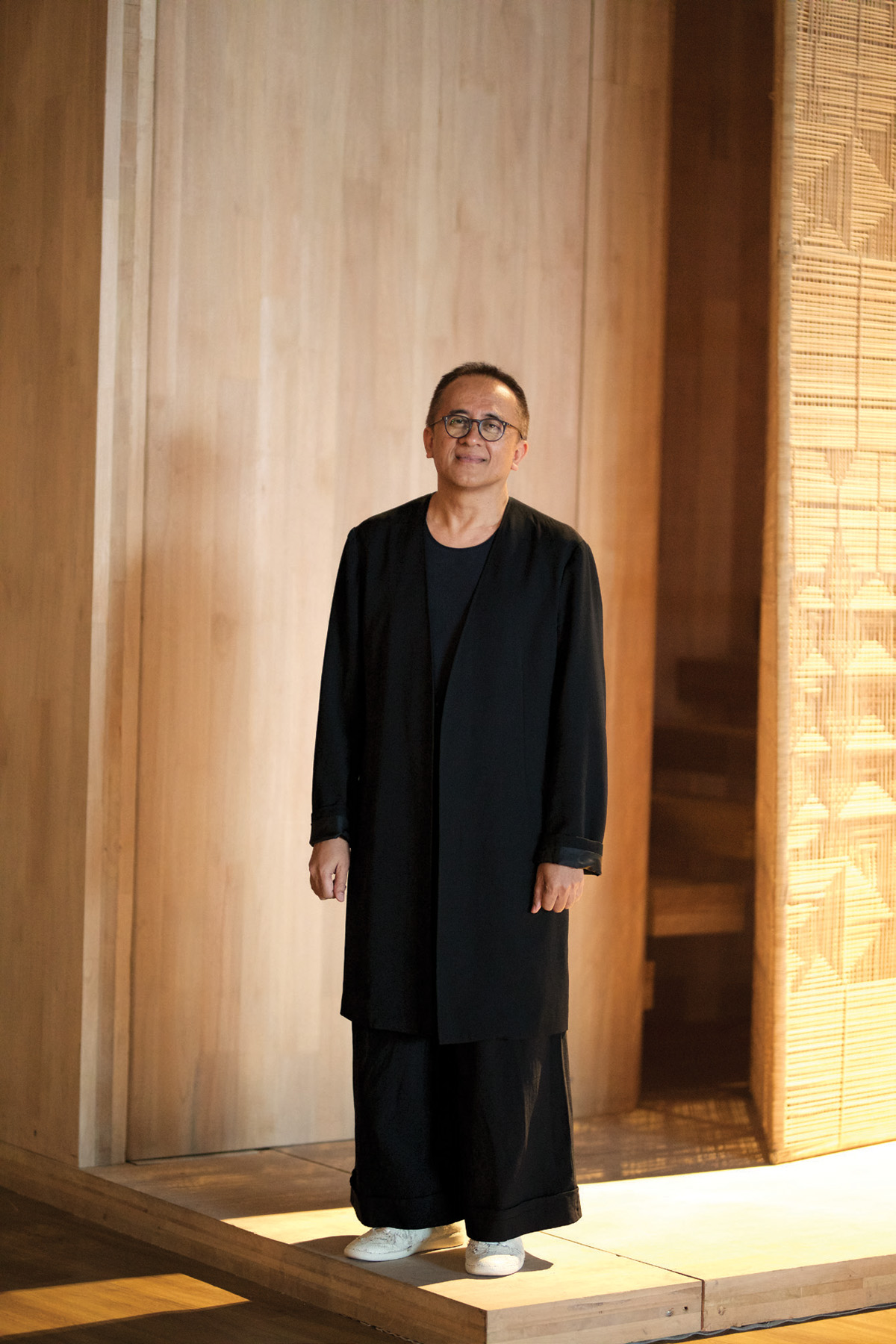 “You experience architecture not just visually but with your other senses too.” Leading architect Andra Matin talks to Ajeng G. Anindita about his latest installation, “Elevation”, which celebrates Indonesian “vernacular architecture”, and reveals why he loves empty spaces.

He is one of the most prominent figures in contemporary Indonesian architecture, and it’s not an overstatement to call Andra Matin a living legend in the design profession. Known for his clean and modern approach to architecture, his work has always emphasised a sense of harmony with the environment. He’s one of the founders of AMI (Arsitek Muda Indonesia, or Young Architects of Indonesia) and this has put him in the vanguard of progressive Indonesian architecture.

Prestige met with Andra at Museum MACAN in Kebon Jeruk, ahead of “Matter and Place”, an exhibition that features his installation “Elevation” and runs from April 13-July 21. Dressed elegantly all in black, Andra explained the inspiration behind his installation. “Elevation” was featured at the 16th International Architecture Exhibition – La Biennale di Venezia in 2018. The work was awarded a special mention, as “a sensitive installation that provides a framework to reflect on the material and form of traditional vernacular structure”.

Andra is the first Indonesian architect to be featured at the prestigious Venetian Biennale. He brought “Elevation” back to Indonesia to become part of “Matter and Place”, which explores the relationship between people and place, featuring six large-scale works by Indonesian and international artists.

The architect and designer has always been fascinated by the way “so many cultures and ethnic groups in Indonesia (the most expansive archipelago in the world) choose to live in traditional ways and respond to the diverse geography (coastal areas, highlands reaching 4,800 metres above sea level, urban areas in which over 55 per cent of the population live) with their vernacular architecture”.

“Elevation” explores the “elevational diversity in Indonesia’s vernacular architecture”, which reflects the way people interact with nature and culture. Made from jabon (Neolamarckia cadamba), a wood commonly used in the timber industry, the installation consists of stages in various heights, hence its name, and features miniature examples of traditional Indonesian architecture from all across the country.

There are nine different traditional homes and dwellings, including Rumah Joglo from Java and Honai from Papua, with mushroom shaped roof made of wood and hay. Every stage represent different height on the traditional homes, so as you go to the upper level, you will find Korowai home miniature in Papua that’s set 10 metres above the ground, typically nestled on a tree.
The façade of the piece, created in collaboration with Lim Masulin, is composed by rattan weaving, forming Indonesian textile patterns. This rattan weaving was made with a holographic technique and inspired by the traditional weaving technique of the Dayak tribe in Kalimantan. Andra also presents how the unique diversity and history of architecture in Indonesia are fundamental to understand the contemporary way of living in harmony with the environment.

“I’m really proud of Indonesia’s vernacular architecture and this installation is to showcase how rich it actually is. With so many different shapes, scales, and proportions, different kind of roof, and most importantly how the live in different level of heights,” Andra told us in a one-on-one interview session after the presentation.

Aside from that, Andra told us that “Elevation” is one of the strategies on how to master a 5 x 5,5 of space and to make an impression from the beginning to the end when people inside a space. “When you enter this installation, not only you will see the Indonesia’s vernacular architecture, you will also experience the Andramatin studio office space. You get an alley when you enter, there’s textures from the weaving, you get natural lighting, but also there’s some space in shadows, there’s different level of heights, and your sense will be heightened. That’s what I want to showcase when I design a building. There’s always a sequence, and it should be dynamic,” he explains.

Surprisingly enough, his journey in architecture was not entirely based on passion in the beginning. It was sort of a choice that he was thrown into. He studied Architecture at Parahyangan University Bandung, but this subject wasn’t his only choice.

“Before you got into university, you had to do a test to determine which major suited you best,” Andra recalls. “I scored well for both medicine and architecture, so naturally I applied for those two types of major in university. I got accepted as both a Medicine major at Padjajaran University and also for Architecture at Parahyangan. Since I’m afraid of blood, I chose architecture,” he laughs.

Andra developed his skill after university by working at Grahacipta Hadiprana, an architectural and interior design firm established by Hendra Hadiprana, a much-loved and respected architect here. In 1998, after 10 years of working, Andra finally decided to go out on his own.

“The economic situation was, to put it mildly, bad in 1998 and, honestly, it was a tough choice for me too,” Andra recalls. “Prior to resigning, I was asked to let go some of my colleagues in the firm because of the economic downturn. So, after thinking about it a lot, I decided to let myself go instead of my colleagues.”

He pauses before continuing. “I thought if I could survive at the lowest condition, I would be fine for the rest of my life. I had to be positive and have some courage to set up my own studio.”
Andra won a project with LeBoYe design and built Dia Lo Gue in Kemang. Aside from residential places and his own house, some of his major works including the Salihara building in South Jakarta, Katamama Bali, Potato Head Beach Club, Cork & Screw Country Club, Ramayana Square at Hotel Indonesia Kempinski and Blimbingsari Airport in Banyuwangi. He renovated the Aquatic Center at Gelora Bung Karno in time for the 2018 Asian Games.

Andra has an established studio in Bintaro, where he and his team work full-time on projects. How does the creative process happen at the Andramatin studio?

“Generally, all the themes come from me. I decide on them,” Andra says. “Then we will discuss the client’s brief. But everything is just an idea until we go to the site and see the condition and the environment we are working at. After that we usually get a clearer idea on what we are going to do and will discuss it with the team. In designing, I always like to do a sequence, so there’s a different impression in each room you enter. There’s always a layering to it, everything feels different yet there’s a cohesion to the entire space. The concept is always in line with the environment, and I like to bring nature closer to the people inside the building.

“For example, we didn’t cut down any trees when building Cork & Screw Country Club. We just worked around them and created a space that is comfortable and yet elegant. Every palette, every design, you can experience architecture not just visually, but with the other senses too. To me, function is still number one, but the end result should be a harmonious blend between functionality and beauty.”

Andra is huge admirer of Le Corbusier, and he has always looked up to the Japanese for their design philosophy, which you can sense when you are in one of his buildings. “I’d like to capture a sense of silence, or calmness, in every building I create,” Andra says. “Indonesians really like something that’s ‘busy’. Everything has to be filled with something. When they see an empty table, they always have an itch to put a vase or something on it. To me, there’s matter in the void. Some people think that idea is boring. But to me, subtle things stand out without asking for attention.”

At the end of the discussion, Andra reveals that his long held dream project, to design a museum, is finally coming about. “We are currently in the process of designing a museum in Bali,” he reveals. “I hope everything goes well and that the building will be open to the public.

“Another idea I really want to work on is doing government buildings. Because they’re always seen as a ‘project’, the result is usually quite average looking. But I do think that government buildings should reflect Indonesian architecture, whether it’s traditional, contemporary, or mix of both, and can be used as an example for private architecture.”

If anyone can design a government building here that isn’t dull and dreary to look at, it’s surely Andra Matin

Style
By Nicharee Phatitit
Sign up to get the latest luxury and lifestyle news delivered to your inbox.
Ajeng G. Anindita