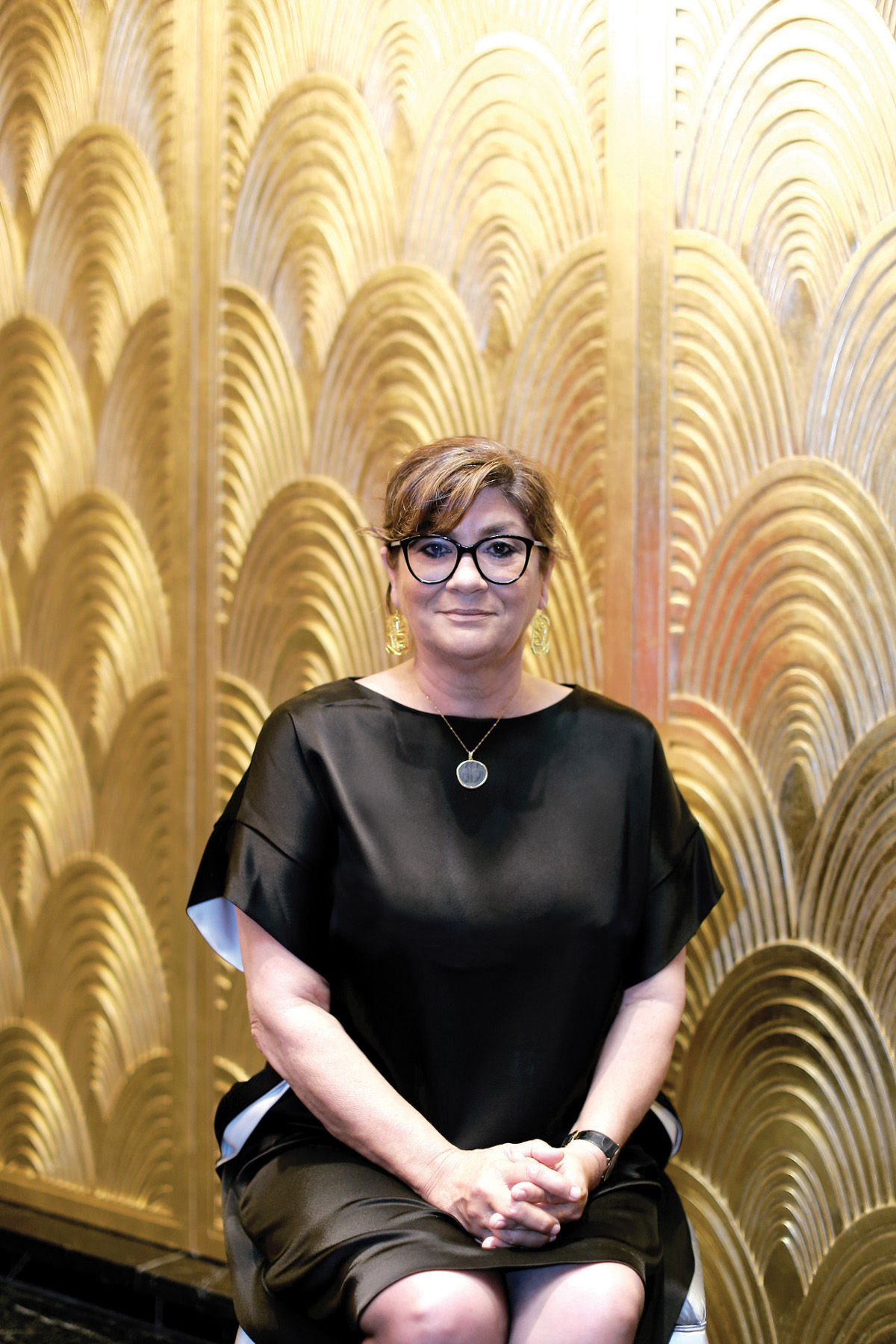 The round, spiral and uneven forms that she and her designer colleagues dream up have set her company’s handmade lighting products apart as exclusive. No two pieces made by Portugal’s Serip Design are exactly the same, as Ilda Pires explains to Liviani Putri.

Ilda Pires does not appreciate the idea of “industrial and mechanical production”. She does not want to live in a world that’s “mainly focused on symmetry, standardisation and monotony”. Her “organic lighting” company, Portugal’s Serip Organic Design, focuses on creating nature-inspired shapes. The round, spiral, disproportionate and uneven forms that she and her designer colleagues dream up have set her company’s handmade products apart as exclusive. No two pieces made by Serip are exactly the same.

“Each piece we produce is a singular and unique work of art,” Ilda declares during an interview with Prestige at Jakarta Design Center, where Serip lighting products are to be found. The designer says she revels in “difference, unevenness, uniqueness and contrast, which is like nature – powerful, distinguished”.

Ilda believes that “Serip´s passion for lighting and search for design innovation provides a unique point of view in today´s mass decoration market. Due to the almost entire absence of mechanical elements in the production process and the increasing human touch, there are never two exact pieces.”

The catalogue “Nature of Light” was launched in 2001. It contained collections inspired by nature, with flower and tree names. In 2002, Serip introduced the organic concept that still prevails at the company. ​By 2007, the company had started producing bespoke chandeliers.

The release of the “Mysterious” catalogue in 2008 was “a huge step in Serip’s history,” according to Ilda. “It helped to set the company apart from the others and totally differentiated our products from what had been done in the market so far. ​The dramatic and theatrical presentation of the products in this catalogue, based on the romantic Sintra scenery (a resort town where Ilda was raised, near Lisbon), received huge acceptance from clients.”

Serip introduced its first chandeliers with LED technology in 2011, devoting itself to special lighting projects. Contrast and duality were the main concepts developed for 2014’s “Black & White Moments” catalogue. This embraced the concept of yin and yang – “opposite or contrary forces that are actually complementary”.

Serip’s Folio Collection lamps, whose designs are inspired by “the picturesque sight of autumn and its fallen maple leaves”, are prime examples of the company’s distinctive perspective on design. “All of our products are handmade, which means each piece has a unique shape, just as in nature,” Ilda says.

Serip was founded in 1961 in Lisbon, Portugal by Ilda’s father, Mário J. Pires Lda. He came up with the company’s name by spelling his own surname backwards. Ilda is the family business’s head designer, working with David Garcia, Daniela Ferreira and Bruno Matos. Responsible for the creation of the organic style that defines Serip. Ilda has more than 30 years of experience. She says she likes “to break the rules of the conventional” and is “passionate about the expression of design as a sculpture.” She adds that she “translates influences of the different cultures of the world” she has experienced first-hand into her own design work.

Mário Pires started out producing classic chandeliers made of glass and brass. The company prospered throughout the 60s and 70s. During the early 80s, under Ilda’s influence, Serip created its first organic design, a halogen cup chandelier. But it was not well accepted by clients. Ilda says that that was because Serip was ahead of its time.

In 1985, the company began to explore overseas markets, choosing Paris as the venue for its first ever participation in an international trade show.

“I had an amazing childhood in Sintra and being surrounded by nature inspired me a lot, especially in spring and autumn,” Ilda says. “Spring resembles a beautiful beginning after a cold, dark winter, when the flowers are blooming and everything is getting greener and colourful. While the autumn is a time of silence, to step back and calm down as the leaves change and fall by the wind.
“I watched my father and mother working, making glass and brass chandeliers. I was intrigued by how things worked at the factory, about how to design products, and I decided to join the company part-time when I was 16 years old.

“At the beginning, my father was against the idea. He said I should just study instead. But I was pretty stubborn. I told him I would work during the day, and study anthropology and design at night. I even accompanied my father to the crystal company to see how the glass was made by hand.”

Ilda learned how to make bulbs and then chandeliers. Next, moving from one department to another and listening to her parents, she spent time learning how to run the family business. After five years, she joined Serip full-time.

“Serip is my first job – and my last,” she says with a smile. “The journey to organic lighting products was rough at the beginning, because the client acceptance was not positive back then. The concept was too far ahead of its time. A lot of people couldn’t understand my designs.

“I like to see lighting products expressed in sculptural forms. I began by putting the technical and electrical aspects aside for a while. Why? Because I wanted to have limitless possibilities and ideas to play with. Of course it made the people in the electrical department frown at first,” she laughs. “But I told them that nothing was impossible, and that encouragement helped them become more creative.”

Ilda loves to travel far and wide. She says that seeing new places, meeting new people and experiencing different cultures always gives her fresh design ideas. For decades, Serip focused on its domestic market. Today, however, the company exports no less than 96 percent of its production to clients in 77 countries all over the world.

Proudly designed and produced in Portugal, every piece coming out of the 3,000 sq m Serip workshop in Lisbon is conceived as a lighting sculpture. It’s the result of group work between artisans and the technical team. “It’s work that demands total communication and supervision,” Ilda says.

Although Serip’s production consists mainly of artisanal work, the company does invest in technology, such as a 3D printer. The design team’s main focus in on customisation and adapting each collection to different specifications provided by clients.

“Serip complies to embrace all different sorts of challenges, such as complex shapes, different sizes or multiple lighting systems,” Ilda says. “The creative process is extremely versatile. “The constant search for different metal finishes and unique glass colours has implemented in the company a bespoke attitude and spirit. In terms of finishes, the client can choose from 50 glass colours and 10 metal colorations.”
Jakarta is one of four cities overseas in which Serip has opened showrooms, the others being Singapore, Beijing and Kiev. “The Jakarta market is outstanding because a lot of people here love to explore new ideas for their homes,” Ilda says. “Martin Lim (founder of Mahakarya Group) has partnered with us, and he has done a great job in terms of the store concept and introducing the brand to the Indonesian market. He shares our values about design and quality.”

Today, with more than 50 years of experience and in the third generation, the family-owned company continues the tradition of developing inspirational lighting. “To them, I tell the same things my father told when I was young, such as that learning from your mistakes makes you grow,” says Ilda of the advice she gives new employees.

“On orientation days, I don’t focus so much on the technical aspects of the work, but on the company’s philosophy. I want them to love what they do, to have positive feelings about what they create. They have to know that in a world of infinite possibilities, it’s how the ideas can be presented and the ability to work with heart that are important.”

“The arrival of younger people makes me happy, since they bring fresh energy to the company and a lot of new ideas. After three decades of hard work, I need to let go and relax a bit, and do some of the things I couldn’t do before because I was too busy.”

Where will Serip Design go from here? “Actually, the future of the company is not entirely in my hands,” Ilda replies with a smile. “Now, it’s up to the third generation.”