Rudy Dodo: Recapturing the Golden Days of the Majapahit Empire 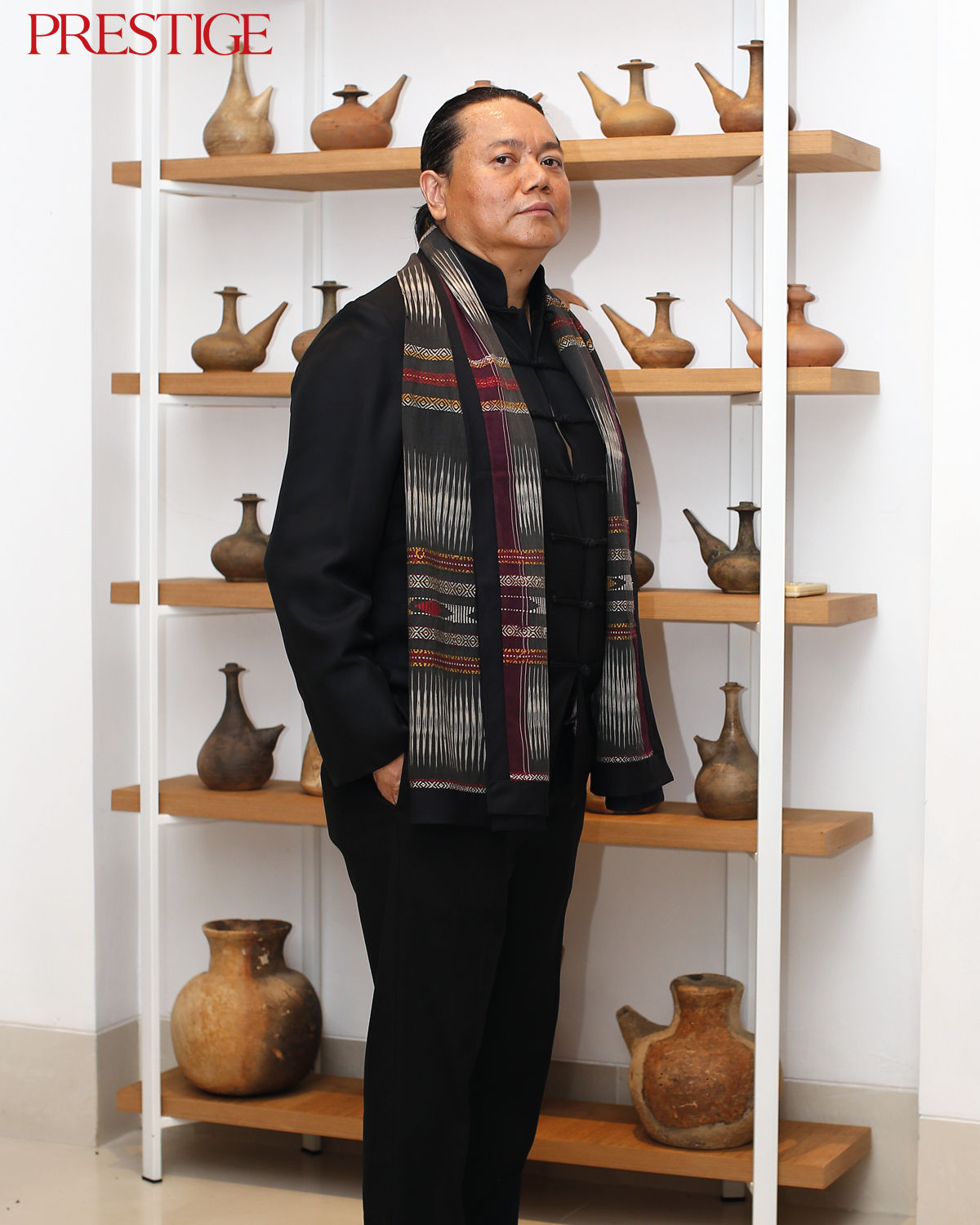 There are hotel lobbies and then there’s The Apurva Kempinski Bali lobby in Nusa Dua. It’s humongous. Visitors have compared the space to a temple, even a cathedral. The new five-star, cliff-top resort’s management team proudly refers to the lobby, which covers 2,000 square metres and towers 14 metres up to a skylight in the tapered gold roof, as “a majestic open-air theatre on the Island of the Gods”.

But it isn’t its sheer size that makes this particular hotel lobby stand out. The design work that has gone into creating it is head-spinning – in terms of scale, quality and sheer detail. Its grand sweep is balanced by myriad details, many of them whimsical, unique carvings, which make each visit to the space a fresh, enjoyable experience for design lovers.

Interior designer and architect Rudy Dodo, founder of Trivium Design Group, and architect Budiman Hendropurnomo, who leads the Jakarta office of Denton Corker Marshall, were jointly tasked by Wings Group, the hotel’s owning company, with recapturing the golden days of the Majapahit Empire (1293-1527). This was the period in which Indonesia enjoyed its greatest period of artistic creativity.

The Apurva Kempinski Bali design project, which took more than five years to complete, is extraordinary by any measure, but it is by no means Dodo’s first triumph. His Trivium Design Group (PT Trivium Wastucitra Dipantara) is an award-winning, multi-disciplinary firm with 20 years of experience in interior design and architecture. Founded by Dodo in 1999, Trivium has grown into one of Indonesia’s most versatile and experienced design firms. Among its past projects: Swiss Club Residence, Singapore; exceptional residences at Brawijaya, Rumah Taman Hijau, Kemang, Teuku Umar, Subang and Batam; Cilember Puncak Villa, Jitllada Thai Restaurant, and many commercial projects, notably Honzen, Spa on the Rocks and The Vimala.

“We are notable for creating a unique identity that transcends the functional aspect of the space, harmonious with the surrounding environment and people,” the designer says of his team. “Our projects include commercial and residential buildings and resorts in Indonesia and Singapore. Our work has been featured in magazines such as Elle Decor Indonesia, Brava and House & Garden, as well as in books: The Sustainable Asian House and 50 Indonesian Interior + Product Designers.”

Before, during and after exhaustive meetings with Wings Group’s William, Teddy and Grace Katuari, Dodo and Hendropurnomo immersed themselves in centuries of Indonesian culture, art and identity to meet the owner’s ambitious brief, researching archive texts and centuries-old literature to find inspiration. Asked to fuse traditional and modern, Dodo based his interior design concept for The Apurva Kempinski Bali around three pillars: story-telling, the resort’s tropical setting and contemporary aesthetics.

“In addition to the magnificent facilities, we also wanted to tell a story worthy of being told, one that makes travellers learn about the richness of the archipelago,” Dodo says. “Indonesia has more than 17,500 islands, which are home to a kaleidoscope of people and cultures whose history stretches back for thousands of years. The influence of successive reigning empires has left an indelible mark on the traditions, culture and psyche of the archipelago and its population.

“Together with the hotel team, we did meticulous research and learned that the largest kingdom ever to rule over Indonesia, Majapahit, was the empire that united the world of arts, design and architecture, and the establishment of much of the cultural legacy for which Indonesia is known today. We have made tremendous efforts to showcase Indonesian heritage in the eyes of the world by incorporating the best local craftsmanship, philosophy and materials into the interior design.”

The lobby is styled after an ancient royal “pendopo”, a reception hall used for important meetings and ceremonies. Craftsmen and artisans from all over Indonesia were involved in the construction of the jaw-dropping space. One of the most striking features is four seating areas surrounded by hand-carved “gebyok” partitions: 12×8-metre panels made from intricately hewn teak, which reflect the extraordinary artistic traditions of the Majapahit empire.

Intimate corners and cosy spaces are warmly lit by low lighting to create private areas within the lobby. Underfoot, a floor of mesmerising labradorite blue granite from Madagascar sparkles under clever low-light illumination, created by lighting and acoustic consultancy Litac, under the guidance of founder Paul Gunawan.

Budiman Hendropurnomo drew on the Balinese landscape for inspiration, taking cues from its green rice terraces and the magnificent Pura Besakih water temple, which climbs up the slopes of Mount Agung. The temple’s formidable shape inspired a 250-step staircase that forms the resort’s focal point.

“To achieve such a theatrical impression, I came up with an architectural composition where a series of at green roofs cascades down the hillside,” Hendropurnomo says. “This mirrors traditional Balinese rice terraces, gradually ascending towards the 55-metre elevation above the Indian Ocean. It’s a ‘stairway to heaven’ using natural clad stones on both sides, while water fountains cascade down with clusters of matured solobium trees, frangipanis and lush tropical gardens covering both sides of the grand stairs.” A network of canals, pools and fountains that surrounds the resort recalls Bali’s centuries-old subak irrigation system.

The resort’s living spaces showcase the finest local craftsmanship and exotic materials, with elegant furniture made from rattan and bamboo, upholstery made from woven Sumba textiles, and handmade woodcarvings from Bali and the Jepara region of Central Java. Furnishings and decorations were collected from across Indonesia, including unique pieces from Sulawesi, Papua and Kalimantan as well as Balinese pieces. Excerpts from an exclusive interview with Rudy Dodo:

Congratulations on creating a magnificent resort, especially the lobby.
Thank you for the appreciation, we are also proud to inform you that the consultants for this project are totally Indonesian designers

How did the concept of paying tribute to the Majapahit Empire come about?
The concept, yes, we developed the ideas with our clients through so many discussions. The project needed so many working hours and attention to countless details for us. I can’t tell you how many hours I spent on it. The end result is very important, so we don’t really count how much time we spent on this project.

How closely did you and Pak Budiman work together and who did you work with on the client side?
Pak Budiman and I worked very closely together. We had a mutual understanding of what was main concept and idea behind his design and me role as interior designer. We had to blend and harmonise our concept with the architecture.

On the client side, we worked closely together with Mr. William Katuari and Mr. Teddy Katuari. For example, there were weekly project meetings. We met with Ibu Grace Katuari two or three times a week to discuss every detail of the project.

Tell us how you researched the Majapahit period. What did you discover that surprised you?
We surely did our research on the Majapahit period for the lobby area especially. We, at the end, did not take the historical “langgam” or historical design philosophy of the Majapahit era, but stayed more to the soul and general philosophy of the era. We remembered Sumpah Palapa by Patih Gajah Mada, and also the “Bhineka Tunggal Ika” and tried to incorporate the design into the modern architecture.

How did the idea of creating a “pendopo” come about?
The lobby is so huge that we needed to create a more intimate and cosy place inside it.

How many craftsmen worked on the project, and where and how did you find them?
For the “gebyok” alone I interviewed craftsmen from Jepara – at least 200 from one place and another 200 to 300 more from all over the Jepara area to help the main team. So, 400 to 500 people were involved in making the carvings. with the main craftsmen being ones we had worked with before.

How did you get the idea for the granite floor?
The idea came about from a visit to a stone fair. The best granite we saw there was from Madagascar.

Tell us about the teak “gebyok” door you created for the resort’s spa.
We put the “gebyok” on the background of the spa reception area as a reminder that we have a very old culture of spa treatments from Javanese royalty.

Tell us about the resort’s ballroom design, especially the limasan-style roof and the Scandinavian chandelier.
The ballroom concept is “Java”. We adopted the Pendopo concept and Cimasan concept from Keraton, and as we know at the Mataram period the Sultan or the palace would import their chandeliers from Europe. This inspired us to use a classic crystal chandelier from Europe, although the contemporary lighting is LED instead of candles.

Of all the project’s unique design pieces and touches, which one(s) are you proudest of?
We are proud of the work of all the craftsmen from Java, Sumba, Borneo, Sulawesi, Sumatera and Bali who helped us.
I spent around one-third of my career time on this project. Yes, it was a labour of love for me. When the project was completed, it felt like a baby had been born.