Leon Jakimic, the Founder of Lasvit, Talks About Bohemian Crystal and Lighting Sculptures 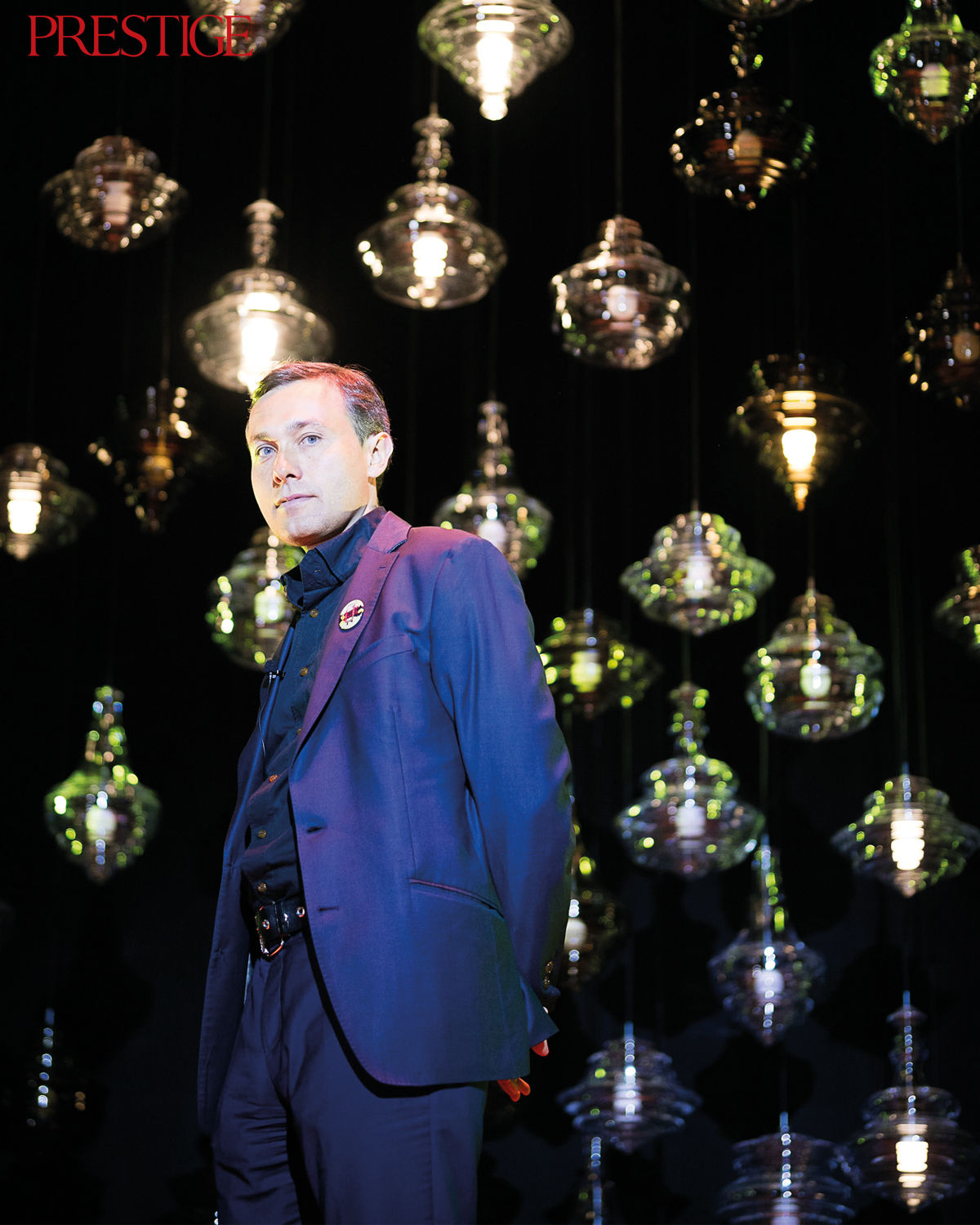 Bohemian crystal has optical properties that must be seen to be believed. Lasvit, a leading glass maker in the Czech Republic, collaborates with top international designers like Kengo Kuma, Yabu Pushelberg and Zaha Hadid Design to use this “magical material that is neither liquid nor solid, a great medium to interpret light”

Apart from being historic buildings of great cultural importance, what do Milan’s La Scala, Rome’s Teatro dell’ Opera, St. Petersburg’s Hermitage Museum and the royal palace in Riyadh all have in common? The answer is that magnificent Bohemian crystal chandeliers hang in each of them.

The region of Bohemia, now part of the Czech Republic, has been recognised for centuries for producing high-quality glass famed for its craftsmanship and beauty. Glass and crystal objects have been made in Bohemia for more than 800 years. The industry is much admired the world over.

The skill of Czech glassmakers is combined with artistic craftsmanship to make the most of the high refraction of light that gives crystal its unique beauty. Glassmakers are trained in industry schools, the first of which was founded in 1856.

“The schools train glassmakers, crystal cutters, painters, engravers and technicians,” says Vadim Horma, Global Sales Director of Lasvit, one of the Czech Republic’s leading modern glass makers. “Over the centuries, skills like these have been passed down the generations.”

Even though present-day manufacturers – such as Lasvit, founded 11 years ago by entrepreneur Leon Jakimic – make use of modern science and technology, they essentially rely upon traditions hundreds of years old. From the mouth blowing of the raw product to its finishing and decorating by means of various techniques, human skill and artistic sensibilities remain essential.

But why choose Bohemian crystal products rather than northern Italy’s famous Murano glass? Its admirers say that Bohemian crystal has optical properties that must be seen to be believed. Holding a top-quality, trademarked Bohemian crystal glass up even to normal light results in multiple rainbows, as the lead content increases the light refraction properties. It’s as if you were looking into a rhapsody of hundreds of prisms, all at the same time.

Horma puts the magic of Czech glass down to the vast quantities of silica sand to be found in northern Bohemia. This fine sand is mixed with potash to make crystal. Other materials can be added to the concoction, such as lead oxide, gold oxide or barium.

“Bohemian crystal became really famous in the 17th century,” says Horma. “But by 1989 and the fall of the Berlin Wall, the industry was falling apart as we lost our east European markets. Our designs had become outdated as well. But then along came Lasvit.”

Also visit: Vino G. Bastian is Prestige’s It Actor of the year!

Husband of Lucie and a father of five, Leon Jakimic has lived in Hong Kong since 2000, and he founded Lasvit in 2007. His mission: to help revitalise the Czech glassmaking industry and the area of Liberec, Bohemia where he was born in 1975.

The son of a professional skier who had dreamed of becoming a top tennis professional when he was younger, Jakimic graduated from the Kellogg-HKUST Executive MBA programme in 2005. Two years later, his company, whose home decor collections are available in Indonesia at Karina Cheung’s Bika Living, began designing and manufacturing bespoke light fittings, feature glass installations and lighting collections at Novy Bor, a glassmaking town in the Liberec region.

Jakimic intends with Lasvit (the name was born from two Czech words: láska (love) and svit (light), to shed a new light on Bohemian glass and help take the industry into the future. Lasvit combines the authenticity of Czech glassmaking tradition with innovative technologies and creative craftsmanship. In a few years, the company has established itself as an authority on delivering bespoke lighting sculptures and art installations made from hand-blown glass. Some of its most recognised installations are in the Dubai Underground and the Etihad Tower resort. Lasvit is also the producer of the Tour de France trophy.

The company collaborates with many notable designers and design houses, including Kengo Kuma, Yabu Pushelberg and Zaha Hadid Design. For his Yakisugi lighting collection, Kuma paid homage to a Japanese technique for preserving construction timber by charring its surface. This ancient technique preserves wood without the need for painting or sealing, perfect for eco-friendly architecture.

Yabu Pushelberg’s lighting collection Cipher is a juxtaposition of heritage techniques and contemporary form. Its delicate hand-blown crystal cylindrical pieces are cut with clean, clear lines. Light emits only from connection points and the sources are ingeniously hidden to soften the overall effect. With components arranged in series and joined by polished champagne-gold finished connections, Cipher’s overall linear form creates a poetic visual rhythm. As a system, the Cipher collection is extremely flexible and customisable, with limitless possible configurations for private residences.

Duna by Zaha Hadid Design was inspired by the coherent yet abstract logic of sand dune formations. Its design concept is realised in a three-dimensional, asymmetrical pair of intersecting glass forms. The striated surface of the crystal glass produces ever-changing effects of reflection and refraction. Narrowly directed light sources beam light through the mass of glass into the entire glass element, highlighting its geometry.

Prestige Lifestyle’s meeting with Vadim Horma took place at Four Seasons Hotel Jakarta’s serene 104-seat Palm Court restaurant. Hanging resplendent many feet above us as we discussed the merits of Bohemian crystal was a stunning example of Lasvit’s work, the Palm Grove chandelier.
The hotel had an all-star design team, including César Pelli, an architect of legendary status, and interiors by Alexandra Champalimaud, a member of the Interior Design Hall of Fame. The result is a light-filled, modern classic interior, with gardens outside.

Also visit: #Homeinspo: Come to bed with the best accessories

“The restaurant’s name was a perfect starting point when looking for inspiration,” Maxim Velcovsky, Lasvit’s Art Director, has said. “The glass elements were shaped to resemble the leaves of the Bismarck Palm Tree. Unlike many other palm trees, this has leaves similar to hands with stretched fingers. They are arranged in playful, intertwined fan shapes, transposed to glass.”

The majestic chandelier, suspended from the 13-metre cupola ceiling, is the first detail to catch one’s eye. The lighting sculpture features 14 fan-like clusters, each up to 2 metres in diameter. The metal central spheres are surrounded by light-carrying glass rods. As with all Lasvit lighting sculptures, Palm Grove was entirely hand-made in the Czech Republic.

Lasvit has done a number of other interesting projects in Indonesia, notably at Li Feng, the Cantonese restaurant at Mandarin Oriental, Jakarta. Designed by Hong Kong-based LRF, the restaurant’s interior is inspired by the history of the spice trade. A sailing theme is incorporated into its glass art and paintings, as well as a ceiling lighting sculpture by Lasvit.

The main dining area features “Across the Sea”, a spectacular 10-metre-long long glass installation. “The concept is derived from merchant voyages when junks cruised the seas,” Lasvit designer Michaela Mertlova has explained. “Water surfaces are represented upside down, using hand-made turquoise glass components in the contours of waves. Their special crackled textures create a sparkling sea-like effect. Amber-colored glass elements evoke stylised ancient junk sails with a sense of sunset. A black metal frame reflects the whole scene, creating a mysterious and dreamy atmosphere. I thought of the sunlight and moonlight that accompanied sailors across the seas, as well as the symbol of a crown and idea of a lighthouse – a beacon of refracted light that guides sailors home.”

Leon Jakimic has said in an interview with Asian Entrepreneur that being Bohemian means “not only having our roots and glass-making tradition in Bohemia (Czech Republic), but also being creative and free-spirited.” Thanks to sticking to these core values, Lasvit has become one of the world’s leading glass art installation and lighting companies in just over a decade.

Art glass, design and lighting are exciting fields to be in, according to Jakimic. “Glass is a magical material that is neither liquid nor solid, a great medium to interpret light, which is intangible. True design is about more than how things look. It’s about how they make you feel.”