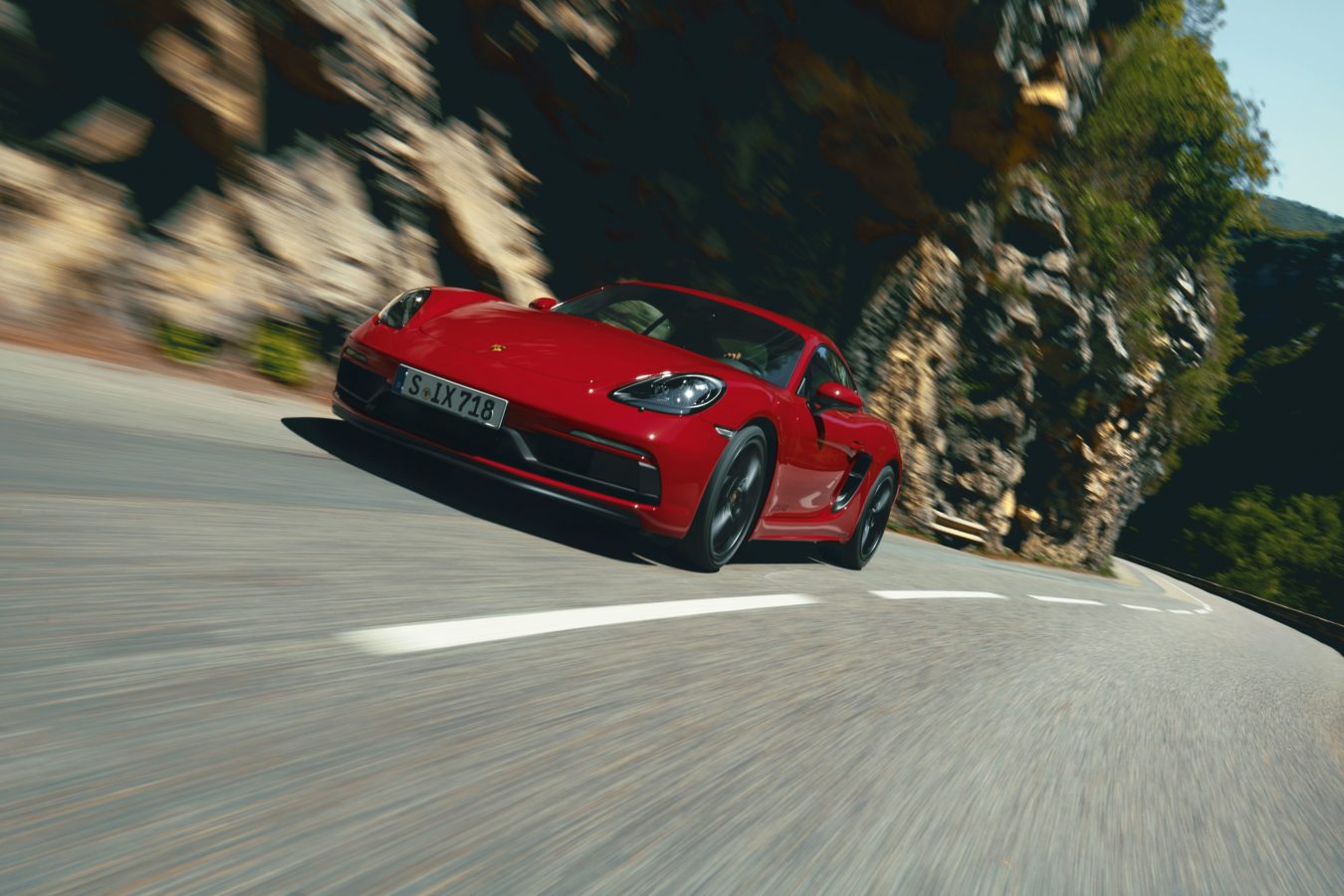 Pursuits
Chasing the Redline with the Porsche 718 Cayman GTS 4.0
Share
Next article

Just when Porsche fans thought that six-cylinder Boxsters and Caymans were things of the past, along comes the 718 GTS, with a magnificent 4-litre engine.

When, a scarcely believable 25 years ago, Porsche debuted the Boxster, the little roadster was dismissed by some as a wannabe, a substitute for those who coveted a full-blown 911 Carrera and its gold, black and red badge, but whose budgets didn’t quite stretch to the real thing. At the time there was more than a modicum of truth to that notion, because the Boxster then served as the brand’s entry-model, but if it gave you the idea that the strictly two-seat convertible – or its coupé derivative, the Cayman, which arrived some 10 years later – was in any way second-rate, you could hardly have been more wrong.

Not only did it feature a wonderfully free-revving flat-six engine, just like that of a proper 911 (though somewhat de-tuned to match the lower price point), but the motor was mounted just a few centimetres behind the driver and bang in the middle of the car, a location that any auto buff will tell you is a near guarantee of perfect handling. And as perfect handling was precisely what it delivered, not to mention sizzling performance and oodles of driver involvement, it took very little time at all for the Boxster to acquire for itself a reputation as one of the finest sportscars that money could buy. Indeed, there were many who said that in some ways it was better than the 911 itself.

Excepting a couple of facelifts and mild increases in power, that recipe continued essentially unchanged until 2016, when the company, bowing to increasigly stringent emissions and fuel-consumption requirements, distressed the purists by whipping out the classic, naturally aspirated six-cylinder motor and replacing it with a turbocharged flat-four. In an attempt to soften the blow, Porsche applied the 718 designation to the re-engined Boxster and Cayman, a historic reference to a series of diminutive competition machines of the late-1950s and early ’60s, which distinguished themselves on the racetrack by taking on bigger and much more powerful rivals – and sometimes beating them fair and square.

Judged by all reasonable standards, the four-cylinder 718 is a very good sportscar indeed. With a seriously uprated chassis, it handles beautifully – just like a Boxster and Cayman should – and it’s fast: in 2.5-litre form, the turbo engine can produce as much as 365bhp and 420Nm, the latter from as low as 1,900rpm.

For died-in-the-wool Porsche enthusiasts, however, the power and efficiency of the new engine are no replacement for the visceral, old-school appeal of natural aspiration, six cylinders and a motor whose neck needs to be wrung to get results – a power unit that repays the effort with a thrilling repertoire of sound all the way up through the rev band to a point some way north of 7,000rpm. That was bad enough, but there then came an even more disturbing rumour: that the next generation of the 718 would ditch petrol power altogether and become fully electric.

Was this the absolute end of the old Boxster/Cayman that we knew, loved and even treasured so much? Apparently it was . . . until late 2019, when Porsche abruptly slammed the shifter into reverse and astounded the petrolhead lobby by unveiling a hardcore, track-focused GT4 version of the 718 Cayman, following it up last year with a pair of marginally less extreme GTS models – and all of them featuring 4-litre atmospheric flat-six engines. It could hardly have been a more dramatic – or, for that matter, welcome – change of direction. 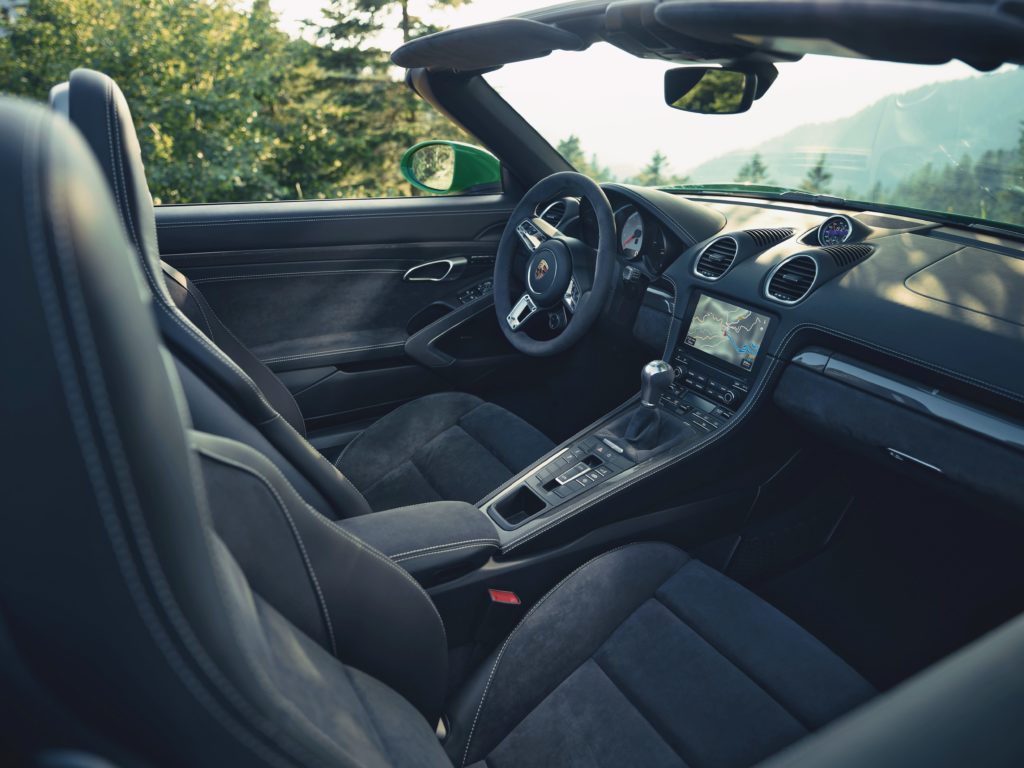 I’ve long been in awe of Porsche’s GT models – an earlier GT4 Cayman, which I experienced in 2015, ranks among the finest cars I’ve ever driven – but I also have a soft spot for any of the company’s sportscars that bear the GTS initials, which to me seem to occupy the optimum position between outright performance and daily driveability that formed part of the original brief of the 911 back in the early ’60s: drive it to work during the week then take it to the track on weekends. And if any Porsche fulfils that requirement today, it’s surely the new 718 GTS 4.0. Only slightly less powerful than the GT4, it delivers a stonking 394bhp (almost 100 horses per litre) and 420Nm at 5,500rpm, and the engine will go on screaming until it reaches its frankly barmy redline of 7,800. With a weight of around 1.4 tonnes, that means a 0-100km/h time of 4.5 seconds and a 290-plus maximum, numbers that are surely rapid enough for anyone. Not only that, but a six-speed manual gearbox comes as standard equipment – and that’s something you can’t say about many new sportscars these days.

Compared with the GT4, which yells its enhanced capabilities with an enormous wing slung across the tail and other radical aero mods, the GTS announces itself more subtly. Blacked-out 20-inch wheels and air intakes and smoked light glasses are the main clues to the additional cylinders and cubic centimetres, along with discrete 4.0 badging on the lower doors, a grown-up approach that should appeal to many potential customers.

Although the GTS is available with either a soft-top Boxster or Cayman coupé body, on a tropical summer’s day I’m delighted to be ensconced in the air-conditioned cool of the latter, in a cockpit that ticks all the requisite boxes: cosy, ergonomically superb (the small wheel is especially gorgeous), fabulous seats and beautiful finish throughout, with high-quality materials that include carbon fibre and suede. The driver’s display features the expected mix of digital and analogue gauges and there’s a decent-sized 7-inch touchscreen above the console, which is lined on both sides by push-button switchgear that bracket the stubby gearstick; the latter shifts slickly and sweetly, though as I haven’t used a manual box for more than two years I take it gently to start with, not wishing to hasten automotive Armageddon by slamming the lever into the wrong slot.

If dealing with three pedals and a hand constantly poised for gearshifts seems like too much of a bore, especially around the city, the 718 GTS can also be ordered with seven-speed, dual-clutch PDK transmission (which should also chop a tenth or so off the 0-100 time). It’s really up to you, but while it won’t be the Porsche-ophile’s natural choice, it does offer a useful extra ratio over the manual-shifting set-up, which does seem somewhat long-geared.

Not that the manual GTS is in any way slow: although you need to work it to dig out the power and torque, the engine revs willingly and, as it does so, the noises it makes are ever more magnificent, beginning with that low-end fussy buzz so typical of a six-cylinder boxer and culminating with a high-decibel howl as the needle swings towards the red zone. It’s exhilarating and utterly addictive, and though several saloon cars are faster than the Porsche in a straight line, few of them are as heart-in-the-mouth engaging as this.

Of course, when it comes to the twisty stuff, the 718 will leave most of them in its dust – plus several bona fide supercars too. Handling and balance both nudge perfection, and the tyres grip the road like Gorilla Glue, so it’s very difficult to get things wrong – and if you do mess it up, the chassis is so forgiving that, likely as not, it will help get you out of it. The steering, too, is pinpoint accurate and feelsome, so you know where you are and what you’re doing almost all of the time. Naturally Porsche has loaded the GTS with most of the trick handling programmes and acronyms it can pull from the options catalogue, but at its essence, this is a rear-drive car that’s so beautifully conceived it could probably do most of the business without them.

I only have around six hours to play with the 718 Cayman GTS, but I’m left feeling even more in awe of it than I was with the first-gen GT4 some six years ago. If that struck me then as the best Porsche I’d ever driven, this new GTS comes so close it’s hard to tell the difference – except that I really could see myself using it every day. Not only does it look to me like the best Porsche in the current line-up (and certainly the best value), but with the possible exception of the Alpine A110S I can’t imagine any credible sportscar rivals either. Add to that its old-school atmospheric engine and manual gearbox, and you not only have something approaching perfection, but whose like we may never see again in a new automobile.