The Ferrari F8 Spider is the convertible variant of the F8 Tributo, which succeeded the 488.

With what might be the sexiest body Ferrari has ever created, the F8 Spider draws inspiration from another prancing horse that ruled the asphalt from the mid-1970s to the mid-1980s – the iconic 308 GTS. Look at the roofline and the shape of its chiselled flanks and you will see what I mean.

Speaking of roof, the retractable hardtop twirls through 180 degrees as it folds in half and tucks into its curvaceous body. The entire procedure takes just 14 seconds and can be done at speeds of up to 45km/h. A cool, and smart feature is the small rear window which you can open when the roof is up. It keeps the wind noise out but allows you to enjoy the sweet sounds of the engine (more on this later).

The F8 Spider’s head-turning looks alone justifies its price tag. That instant when you catch sight of its wraparound rear spoiler and round tail lights (further nods to the 308 GTS), you know it is a Ferrari. And that is all you are likely to see of this speed machine if you are not the one driving it because it is blistering fast. How fast? The mid-mounted engine residing under the manta ray- shaped cover is a famous one. It is the same 3.9-litre, twin turbocharged V8 engine as the unit that propels the 488 Pista. However, it is even more powerful, thanks to a few enhancements like the Inconel manifolds, titanium connecting rods and turbine wheels, and turbo rev sensors which were developed in the 488 Challenge race car. With 710hp (50hp more than its predecessor, the 488 Spider) and 770Nm on tap, it is the most powerful road-going V8 that has ever left the Ferrari factory. Tasked with gear changes is a lightning-fast, seven-speed dual-clutch transmission with improved gear ratios.

Put pedal to the metal and the 1,505kg supercar demolishes the century sprint in 2.9 seconds. Leave your foot on the accelerator and 200km/h is achieved in 8.2 seconds. Its top speed of 340km/h puts the F8 Spider firmly in the elite “Club 200” (comprising cars that have a maximum speed of at least 200mph or approximately 322km/h).

While it is amazingly swift, I love how the low-slung Ferrari looks fast even when it is standing still. The swollen wheel arches, side intakes, ground-hugging front valence, super-sleek LED headlights and S-duct which dominates the front of the car make passers-by whip out their smartphones for selfies.

However, when it zooms past you, it makes you stop in your tracks, and savour that oh-so-wondrous sound from the high-revving, turbocharged V8. Generally, turbocharged engines do not sound very exciting but this one is deliciously different. How does Ferrari accomplish it? And more importantly, why hasn’t anyone else managed to do so? This truly is one of the best turbocharged engines out there. It is almost free of the dreaded turbo lag, even at lower engine speeds. It spools up as swiftly as a naturally aspirated engine from 2,000rpm hence in most driving situations, you will never find yourself compromised where instantaneous acceleration is concerned.

Inside, the F8 Spider is dominated by leather and carbon fibre with the highlight being the carbon fibre racing seats which fit my large frame nicely. The cabins of Ferrari models have always been extremely driver- oriented and this one makes no exception. All key controls are mounted on the steering wheel and these include turn indicators (which took me some time to get used to), engine start/stop, dampers, voice control and phone, wipers and last but not least, the Manettino which enables a swift selection of myriad drive programmes.

After spending an entire day in the F8 Spider, I give it top marks for all-round driveability. Throttle, steering and braking – all are super easy to dose hence you feel like you are in absolute control. It cruises happily in the city or on the highway, with sublime ride comfort, but as soon as you find that perfect, winding road, it instantly transforms into a razor sharp, speed machine that eats myriad curves and corners for breakfast.

Compared with its predecessor, the Ferrari F8 Spider feels more harmonious with crisper, more predictable road manners. Still, like all supercars, especially those bearing the Ferrari badge, it is the engine that sets the tone for the whole car. And what an engine this twin-turbo V8 is. It gives a sense of unbridled excitement and unrelenting immediacy that makes it one of the most potent, super high performance drop-tops money can buy at the moment. 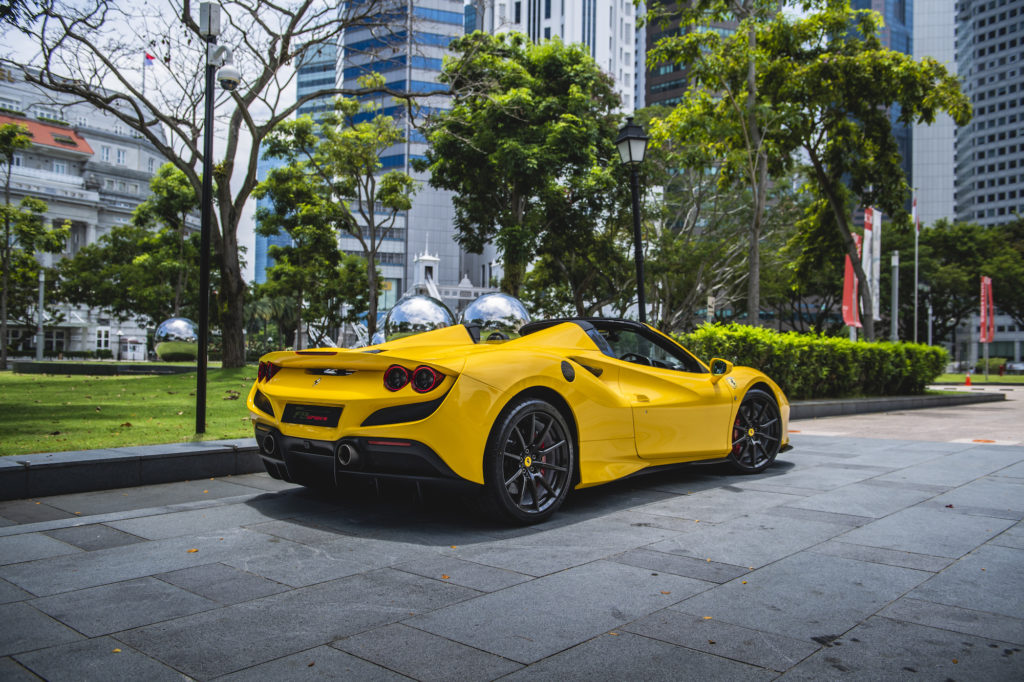 This story first appeared in the March 2021 issue of Prestige Singapore.

Style
By Liviani Putri
Sign up to get the latest luxury and lifestyle news delivered to your inbox.
Tony Tan
Motors

Roof Down Driving: Our 5 Fave Rag Tops for the Summer

Automobiles are increasingly being used by artists

Following the launch of the Golden Bridge Round in