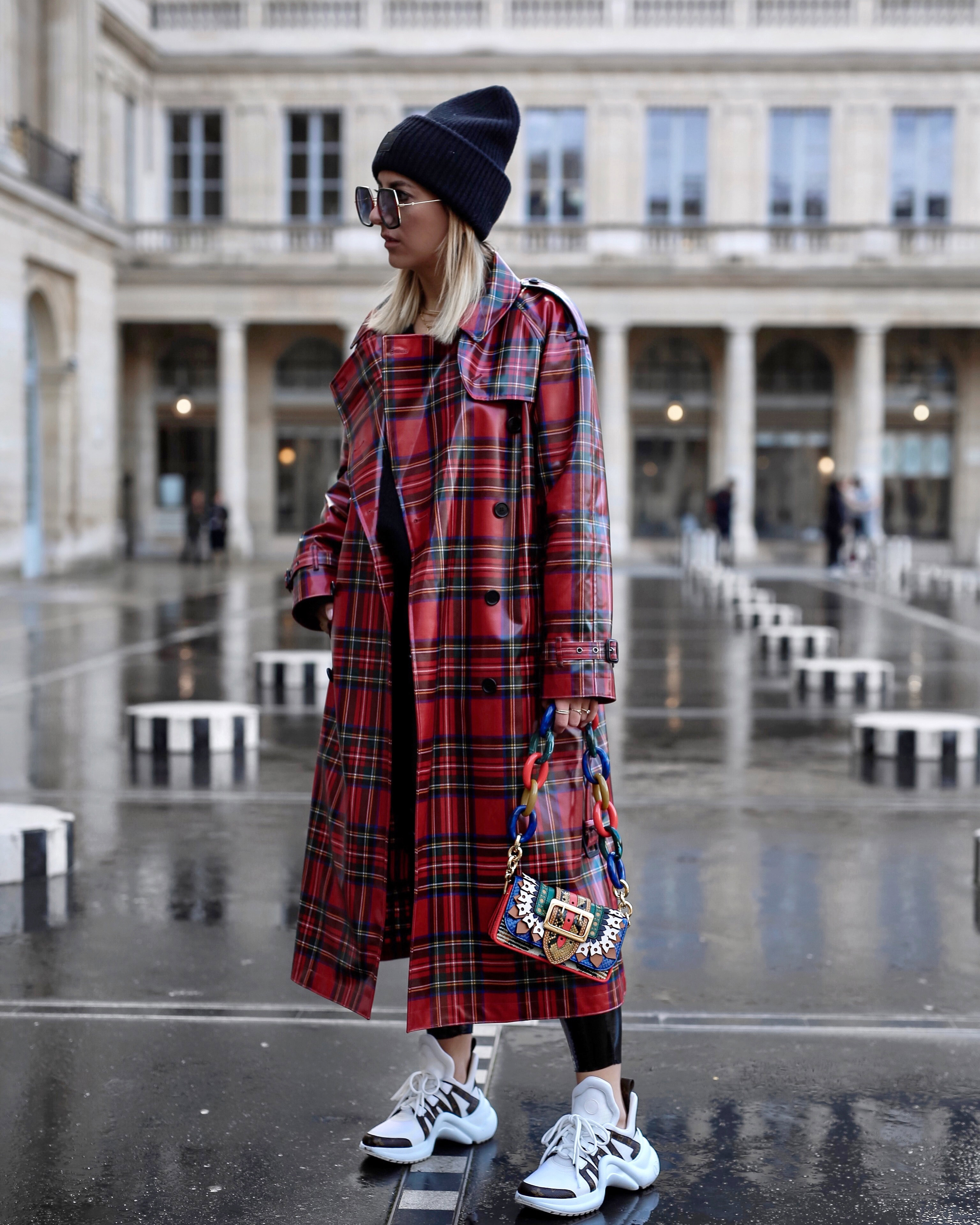 It’s becoming increasingly obvious that clothes with added functionality make hectic lifestyles easier. The sliced, assembled and reworked trench coat seen all over the recent catwalks makes for a new lesson in style, but a true fashion chameleon might opt for one of the new reversible raincoats from mainstayer Burberry – plain gabardine on one side and heritage plaid on the other, with key details like buckled straps and patch pockets – perhaps paired with Stella McCartney’s new reversible Falabella tote bag.

Classic and even androgynous, items like these are part of a move away from what can be a time-consuming and inflexible dressing approach. Welcome to the new multitasking wardrobe.

International Vogue stylist Mary Fellowes, who has spent five years working in New York, is an enthusiast of “anything reversible – it means more bang for your buck”. She describes the multitasking wardrobe as “the polar opposite of occasion dressing, which nowadays is the reserve of Republican socialites. They need outfits for lunch, outfits for bridge, tennis, theatre and opera. In light of the barriers of gender coming down, and the political climate we live in, dressing in these multiple different ways and the idea of any modern woman being so enslaved to style seems too disempowering. So, the multitasking wardrobe is basically saying, ‘I’m better than my clothes, I won’t be enslaved by them.’”

French Vogue boldly declared this summer that fashion was fluttering “between fantasy and classicism, shedding light on the debates that grip the world”. Street style and accessibility to social media, particularly Instagram and Pinterest, have promoted experimentation. MatchesFashion.com Buying Manager Suzanne Pendlebury has her own observations.

“I think the customer has become more discerning and wants effortless ease from her wardrobe options,” she says. “With increasingly busy lifestyles, women certainly want to invest in pieces that work as part of the changes in her day – Blazé Milano is one brand that comes to mind in this category, creating classic blazers that can be worn as part of a casual day look with jeans and trainers, or at night with dresses and heels for a more formal look. We try to think more about who our customer is and the lifestyle she may lead and this never fits into one type of idea.”

While the blazer-and-jeans/dress combination is scarcely a new one, it’s the emphasis on a classic investment blazer (think gently tailored McQueen or, for a bolder statement, sharp-shouldered Balenciaga) to team with seasonally changing separates that the Matches approach offers. Then you can add a feminine Preen dress, Levi’s Wedgie jeans or a wrap skirt (check out Altuzzara and Palmer//Harding), with the option to wear a T-shirt or button-down, partially tucked into the waistband. Nicholas Kirkwood’s Beya mules in bronze or Gucci’s red Marmont mid-heel pumps keep things elegant yet comfortable.

Currently, according to financial experts Deloitte, there are two major interconnected trends characterising the changing behaviour of luxury purchasers. The first is a change in emphasis from the physical to the experiential and how luxury makes you feel. The second relates to how the luxury shopper increasingly demands a different, more personalised product.

More than half of the consumers in a Deloitte survey admitted to conspicuous consumption or buying luxury products purely for the status that comes with possession of certain objects. But status has now become less about “what I have” and much more about “who I am”: more ethical, tasteful and discerning. And every item in the wardrobe is being made to work much harder and have extra flexibility.

This makes perfect sense when market leaders such as Stella McCartney are known for their uncompromising ethical standpoint, and sustainability is no longer just another buzzword. Designers, retailers and consumers are all looking harder at how to create and buy more responsibly, ethically and cleverly. The new uniform requires long-term thinking.

Livia Firth’s Eco-Age Green Carpet Challenge, or the recent awards-season black dress code to support the #MeToo sexual harassment movement, show celebrities solving the dilemma of occasion dressing by making a considered and influential statement. Sometimes this is overt, like a slogan T-shirt, but more subtly Amal Clooney’s choice of a Richard Quinn trousers-and-skirt combination at the Met Ball reminded us we were looking at not just an A-lister but also a serious career woman. For those who want something that can fit as easily on the red carpet as for an after-work drink, young British label Needle and Thread (a growing range of stockists include Nordstrom, Harrods, Net-a-Porter and ASOS) has a growing reputation for affordable tulle skirts and tiered embellished gowns, many of which look totally at home with a denim jacket.

Accessories clearly play an important supporting role in the flexible wardrobe. Shoes, handbags and jewellery in particular are easy to incorporate across a range of outfits and can add a recognisable chic touch, or a signature. Octogenarian American fashion icon and interior designer Iris Apfel’s clothes were exhibited on identikit mannequins, each wearing a pair of her owlish glasses – no further reference was needed. The Queen’s Launer handbags and Philip Treacy hats are the uniform of a woman whose schedule includes everything from weekly meetings with the British prime minister to attending Richard Quinn fashion shows.

MatchesFashion’s Pendlebury is clear about the need to preserve an individual style. “Over recent fashion weeks, we saw so many people wearing their track pant-style trousers with embellished Prada heels, others with a simple Veja trainer – these were different takes on a trend, based on the individual’s lifestyle, schedule or mood. The willingness of luxury brands such as Burberry and Balenciaga to embrace a more casual and flexible approach to fashion is more of an indication of brands acknowledging the different ways that people like to dress.”

Fellowes often works with celebrities, whose day might involve going directly from a meeting to an event, changing roles in real life. “It’s always good to look at what the hard-working actors wear, because you know they’re not stopping off to get changed all the time. They have to have these wardrobes that work in different cities. They’re often not just an actor but also a writer and a producer and they want to look serious, but they might go straight from that production meeting to a screening or a play that’s opening on Broadway, and their wardrobe has to work for nine hours straight.

“Some of the models, too, have empires of their own. They might have a swimwear line or they might collaborate with a designer, so they’re doing a million things, they’re not just girls who have hair and make-up teams and wear beautiful gowns to awards ceremonies. They have to make their wardrobes work seriously hard for them.”

One solution is to buy a multifunctional piece. Shayne Oliver’s jacket-dresses for Helmut Lang can be buttoned and ruched in multiple ways, including doubling as outerwear. Altuzzara’s striped and belted coat can work as a dress, and the new season’s shirt dresses, as showcased by Rosetta Getty and Derek Lam, are also lightweight coats. A jumpsuit is another versatile option: Temperley’s fluid sequined version, Sonia Rykiel’s cheeky gingham and Vanessa Seward’s floral prints can all be disguised as trousers under a sweater for the office.

Consumers who are travelling make almost half of luxury purchases, and for those on the go, function in any form is welcome. Fellowes’ solution is to stick with a simple long dress or versatile separates, and keep transforming jewellery – think Simone Rocha’s crystal floral earrings or Markus Lupfer’s charm ties for ankles or wrists – in your handbag. “To me, the multitasking wardrobe is best when you’re doing the kind of Katharine Hepburn, Diane Keaton, men’s-inspired look; Céline under Phoebe Philo would be the best contemporary reference, or Stella McCartney. Stella’s clothes are so abstract and distilled that they defy occasion, even the overcoats. I also think Victoria Beckham’s pieces are brilliant. And I think that a tuxedo worn with just about anything is one of the greatest things you can ever have for multitasking dressing. McQueen, the original YSL …”

The trick to creating a multitasking wardrobe, then, seems to lie in a recipe of skillful combinations: satin T-shirts and wide legged trousers under belted blazers; longer cardigans that also serve as dresses; clever accessories. For double value, more and more fashion designers are reversing garments, like the ice blue satin gown in the recent Self-Portrait show that can be flipped around to have the slit at the front rather than the back, Victoria Beckham’s reversible jacket in midnight blue shearling and garnet red leather, or travel retailer Helene Clarkson, who actually specialises in reversible pieces that can be mixed and matched.

So, what is the best way to work your flexible wardrobe this season? Forceful femininity is certainly still in vogue. Individuality has never been more desirable. Multitasking means applying serious imagination to your wardrobe. Shoes are often flat and practical but always edgy; trainers are still de rigueur. Bags can be worn in multiple ways, so consider the Chanel Gabrielle or one of the new retro belt packs. Make sure you have some tomato red in the mix, preferably with pink; some old-school logos; sequins for day – and yes, that classic staple whether reversible or not, a raincoat. Because, while the multitasking wardrobe may feature new multifunction clothes, it’s also just as importantly about those
old wardrobe classics in a brand-new guise.

Style
By Claudia
Sign up to get the latest luxury and lifestyle news delivered to your inbox.
Alison Catchpole