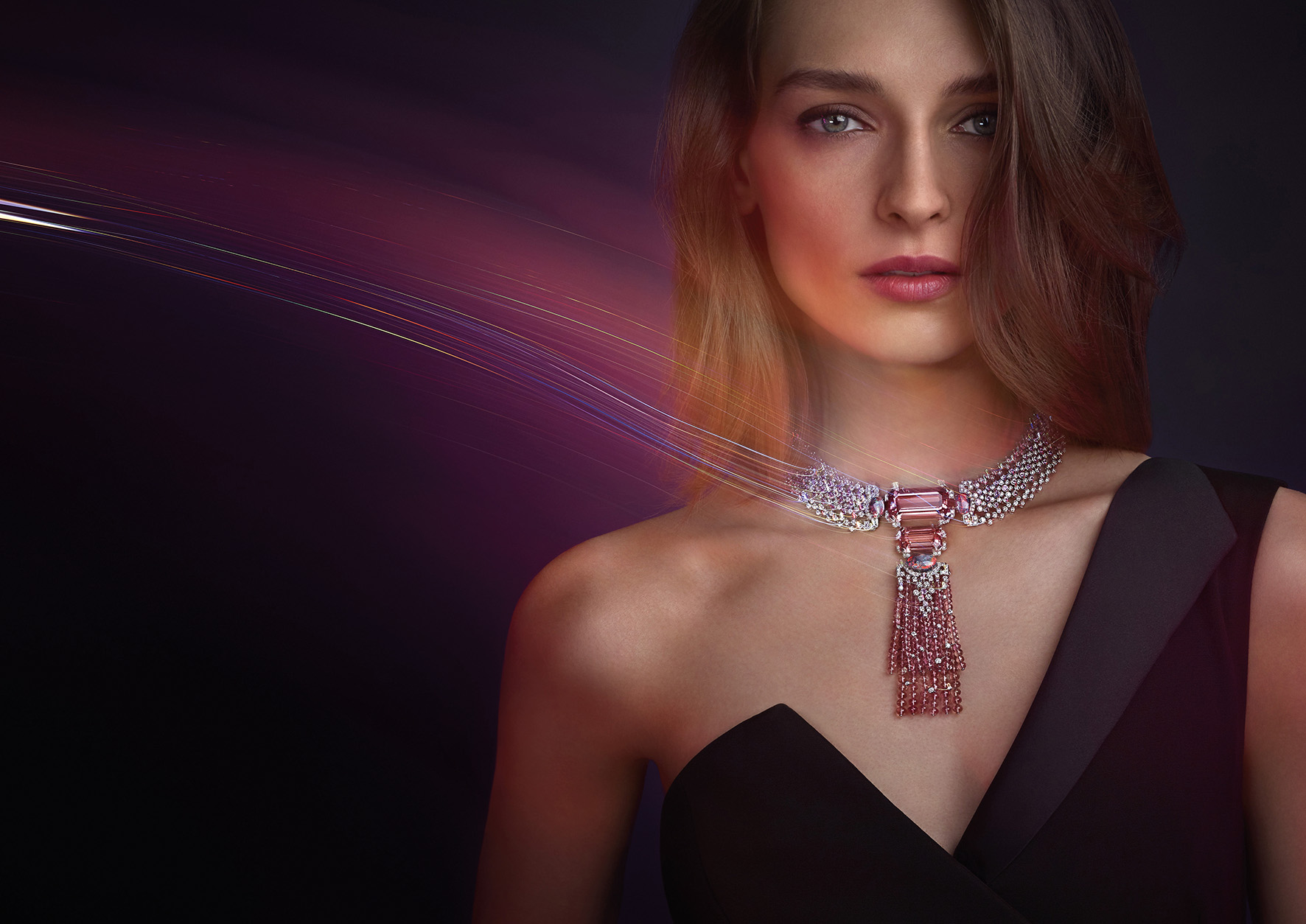 In Cartier’s eyes, beauty knows no bounds. Since the days of Pierre, Jacques and Louis Cartier (brothers credited for establishing the Cartier brand worldwide), the Maison has traversed the length and breadth of the world to uncover the rarest gemstones. In turn, these quests have led to the exploration of exotic locales such as India, Africa and Russia, which inspired some of its most evocative creations.

This year, Cartier revisits these countries through its latest high jewellery collection, Coloratura. Composed of some 240 colourful creations, it takes you on a whirlwind journey through the sun-drenched plains of Africa all the way to Japan’s dreamy cherry blossom gardens. But it wasn’t merely the fascinating architecture, topography or native flora and fauna that inspired Cartier this time around; designers also drew from different cultural festivals in these countries a joie de vivre they injected into
the jewellery.

In the example of the Yoshino necklace, made to be worn in three distinct ways and headlined by two impressive emerald-cut morganites totalling 55.18cts, Cartier was inspired by Japan’s hanami, an ancient festival that heralds the arrival of spring and highlights the transient beauty of cherry and plum blossoms.

While the mind instinctively conjures up images of clouds of cotton candy-pink flowers, Karachi is quick to offer Cartier’s interpretation of the popular festival: “Although we wanted to reference cherry blossoms, we refrained from using colours that were faded. That’s why we added opals (three cabochon-cut opals totalling 8.13cts) to make the effect livelier. To ensure that the jewellery wouldn’t be too bold or aggressive, we also mixed three different types of pink gemstones that would subtly accentuate one another, like musical chords,” she adds. Further adorned with pink sapphires and a cornucopia of tourmaline beads and brilliant-cut diamonds, the Yoshino necklace is also one of the most challenging to produce because of its transformable structure.

The Matsuri necklace, composed of a delicate latticework that forms the structure of a lantern, is also inspired by Japanese culture. Set in platinum and festooned with a 14.82-ct cabochon opal and a 7.25-ct oval-shaped tourmaline, Karachi shares that this necklace also took great pains to produce. “The structure needed to be perfect so that the lattice could give off this optical effect. Since every single measurement needed to be very accurate, we had to use a computer programme to ensure everything would be regulated.”

In India, Cartier turned to Holi, the vibrant festival of colour that also marks the advent of spring, for a brand-new and refreshing take on the Indian sensibility. Since the early 20th century, Cartier has adopted Mughal-style jewellery as part of its design language, the most iconic expression being Tutti Frutti, which usually features carved and cabochon-cut emeralds, sapphires and rubies.

In the new Holika jewels, Cartier does away with the ornamental style for something more architectural and swaps the saturated red, green and blue tones with lighter hues that blend together harmoniously. Maintaining this combination was important, Karachi points out, because of the special meaning ascribed to each colour.

“Red is for joy and love; blue is for vitality, and green is for harmony. They come together to form a perfectly balanced design,” she says.

The result is a fitting tribute to the Hindu festival of colours and love, with cushion-cut rubellites set off by rivers of lagoon blue tourmalines and lime green chrysoberyl beads.

Another new proposal is found in the Chromaphonia necklace, a stately creation dazzling with 22 baroque emerald beads (for a combined weight of 199.02cts) from Panjshir in Afghanistan, spinel beads, mandarin garnet beads, turquoise, onyx and diamonds. Inspired by Hungarian folk dancers and their elaborately embroidered costumes, Karachi says it was also an opportunity to try something out of the ordinary.

“We usually present emerald jewellery in a more classical way but we wanted to find a new way of enhancing emeralds,” she says. “By adding little touches of colour, we tried to convey this sense of joy and celebration that is consistent throughout the collection.”

Africa is the final destination in the Coloratura journey. “It’s a new territory for us but the world is so large we wanted to speak about more cultures,” says Karachi. The intricately beaded Kanaga necklace reverberates with the beat of an African drum: Composed of spinel beads and diamond-set gold segments carefully hand-strung together and cascading from a collier, its deceptively simple design belies the number of painstaking hours taken to create it.

What the untrained eye doesn’t question, are the uniquely and irregularly shaped beads that have been strung into neat rows, with nary any one out of position. “It’s a very powerful design. It looks very simple, but carries a lot of energy. This is a great example of what Coloratura is about: It is a virtuoso of voices and in this piece, you can almost hear the music of Africa,” says Karachi.

Elsewhere within the collection, recognisable silhouettes of Cartier icons continue to serve as proud ambassadors of its style: Majestic Tutti Frutti necklaces demand attention even from the most cursory observer while pieces with panthers and tigers sneak their way into unsuspecting hearts.

Familiar colour combos, such as red and green; blue and green; and red and black, also appear in a collection that celebrates Cartier’s mastery in colour.

One of the most stunning examples, which shows a bold pairing of red and black, is found in the Orienphonie wristwatch. It comprises diamonds, onyx and 19 orangey red coral beads of 130.46cts. While its structure is reminescent of an African ornamental cuff, its striking palette offers an immediate reference to Chinese decorative art and the art deco style, both of which have, been incorporated into Cartier’s design language.

Image, style and  talks about the new Coloratura collection and and what defines Cartier’s design language.

Colour is important to Cartier. How and when did this come about?
Cartier’s style was born out of colour; it’s also why we continue to impose new associations of colours. The very first colour combination we can talk about is blue and green, colours derived from Morrocan tiles and Islamic culture. When Cartier first paired those colours, it was a revolution because in Western culture, it was bad taste to mix blue and green. However, Louis Cartier decided to mix emeralds and sapphires together and it turned out to be a huge success.

Tell us more about Tutti Frutti. It’s one of Cartier’s most iconic and colourful expressions.
Its mix of colours has roots in Indian culture but was transformed by Cartier. The basis of Indian jewellery is to mix carved rubies and emeralds; in many parts of India, it is impossible to use blue sapphires because it brings bad luck. Cartier decided to mix carved blue, red and green stones together in the 1920s; it became popular with Europeans who were only used to seeing jewellery with faceted stones. There were some European press who said Cartier was going barbaric in terms of taste and innovation!

Since coloratura is inspired by countries that inspired Cartier’s style, which, in your opinion, carries the most influence?
There are different countries that are really important to Cartier’s style. China, for instance, gave Cartier the idea of combining red with black. Islamic art and Japanese culture were also two key influences behind Cartier’s move towards abstraction and geometric designs at the beginnning of the 20th century.

Is there a piece in the Coloratura collection you are most partial to?
I like the Chromaphonia emerald necklace because it combines the preciousness of rare emeralds with beautiful design and colour combination. It also communicates accurately our intentions for this new collection: Interesting shapes and combination of colours, together with very high-quality stones.

Coloratura is as much about new colour expressions as it is about honouring existing colour codes. How does Cartier balance the need to be current with its responsibility to the past?
At Cartier, it’s all about innovation and movement. Nothing is fixed forever. Our founders looked at style as a living language that is open to evolution and adapted to the times. This means that the jewellery we create today has to be adapted to the way people today wear jewellery. That remains the objective at Cartier. For example, with regards to mixing the three colours of red, green and blue: Although we used gemstones from this same colour combination for the Holika set, it is done in an entirely different way. We used pastel or [brighter] colours to achieve a totally different look that is, at the same time, still very much in line with Cartier’s heritage.

What defines a Cartier piece?
I think Cartier’s style is defined by certain visions of what is beautiful, and a notion of beauty that is unique to Cartier. It’s a question of sense of proportion and volume: Everything is, in a way, 3D.  It’s also about an object’s lines and curves, a combination of colours, and how you look at colours. It could also be something deemed traditional now but was not, say, a century or 50 years ago.

Would you say it’s intuitive?
It’s linked to experience, not something you learnt from a book even though we have many books in our archives. Reading books is not enough; it needs to be ingrained in your mind. It’s like learning a language: You can start with help of a grammar book and a dictionary, but at the end of the day, how you successfully express yourself in that language is up to you and your talent.