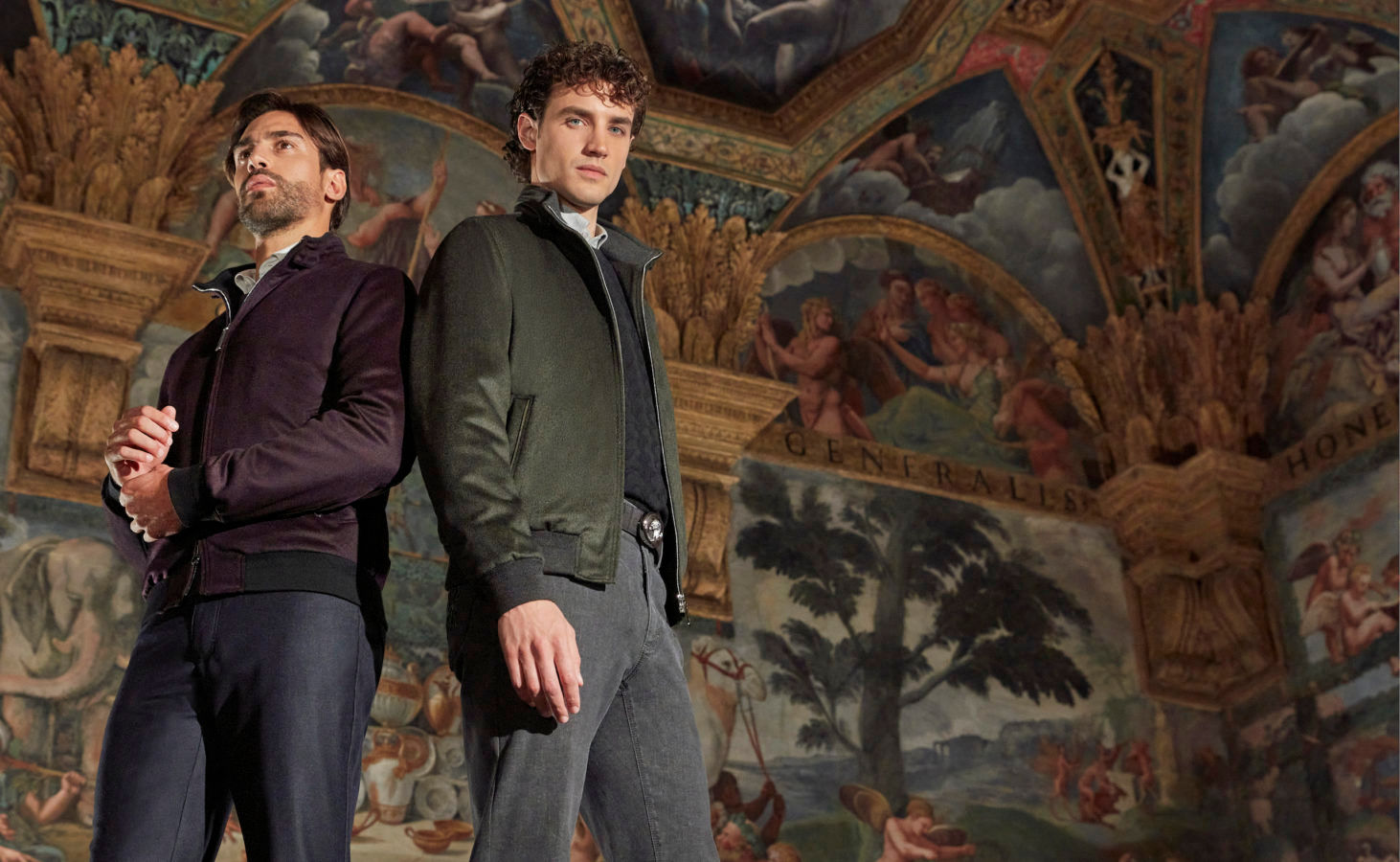 At the unveiling of Stefano Ricci autumn/winter 2022 collection, we explore the artistry at the heart of the Italian luxury lifestyle brand.

And we talk to CEO Niccolò Ricci and creative director Filippo Ricci about the multiple global expansions planned at the family HQ.

Those who know the Ricci family have become accustomed to wonderful surprises when it comes to their fashion presentations.

A small group of journalists and VIPs from around the world gather each season, either in their hometown of Florence or another divine Italian location gaining private access to historical locations, artistic gems or cultural relics.

It always feels like a journey of discovery as well as the unveiling of the latest sartorial line-up, as these presentations and campaigns come as love letters to their native Italy. As creative director Filippo Ricci explains, “It’s about celebrating not only the most famous cities and locations in our country but also some locations that are real hidden jewels of Italy.”

This season didn’t disappoint. The UNESCO World Heritage site of Mantua city provided the setting for the unveiling of the Stefano Ricci autumn/winter 2022 collection, as well as some key business announcements. Next year will be the 50th anniversary of the label, which was founded by Filippo and CEO Niccolò Ricci’s father, Stefano, a man whose global vision also led him to open his first boutique in China almost 29 years ago.

Today, Niccolò reports that in spite of the pandemic, growth last year was “strong in stores in United States, Southeast Asia, China, Russia and the former-Russian Republics. They’re all out-performing,” he says.

Stefano Ricci occupies a rather special niche in the world of high style and luxury menswear. Unbeholden to shareholders, mass-market movements or even the luxury mainstream, the family company has continued to flourish, creating traditional alpha-style apparel for wealthy males and emerging from difficult Covid times more than healthy.

“We’re going to be openings a few new stores in 2022,” reveals Niccolò. “The main one will be in New York on 57th Street, a new milestone for our company.” Also in the pipeline are stores in Kuala Lumpur and Bangkok.

But today we’re firmly in Italy — in Mantua, the small but once-powerful seat of Renaissance military power and artistic splendour. At the outskirts of the mysterious “sleeping-beauty city” is the Palazzo Te, built by the architect, painter and artistic director Giulio Romano (a favourite pupil of Raphael’s) for Federico II Gonzaga, Marquess of Mantua and his lover Isabella Boschetto. It now stands as a stunning museum housing breathtaking painted frescos and sculptures, and rooms that seem to get increasingly elaborate with ceilings bordering on the transcendental.

It’s fitting that Filippo and his team engineered a collection that evokes much magic, mystery, and wonder through the enchanting use of beautiful raw materials, luxurious and textured to the touch. It includes masculine-cut suits and outerwear, made with characterful artisanal handiwork and careful construction that pays special attention to wearable comfort.

Stefano Ricci is hitting a few key points with its core demographic of ultra-high-net-worth males adapting to a new post-pandemic lifestyle. Suiting becomes more occasional rather than necessarily everyday, with smart casual and leisurewear becoming wardrobe mainstays. Hence the luxurious sneakers in suede and deerskin, as well as nubuck crocodile, a must today for certain men.

There’s an affinity to leisure and exploration of the great outdoors with sumptuous knit jogging suits, padded down jackets and gilets that come with easily wearable zippers, complemented by a sartorial field jacket or a luxurious hooded jacket with fox fur trim. As Filippo explains, “It’s the details that make the difference … and this applies also to Mantua, a small town that makes a big impact, home to some of the most beautiful theatres, as well as all these incredible rooms inside the Palazzo Te.”

This season shows off a variety of textures in effortless styles, from crewneck and rollneck knit jumpers, cashmere and cashmere-silk blends, soft suede blousons and jackets, and luscious Vicuna, which emerges a protagonist this winter. Jackets with mandarin collars offer an easier, softer take on the suit jacket. And we’re coveting those double-breasted deconstructed coats in wool, that come in rich hues ranging from burgundy to Ricci blue and earthy, neutral shades evoking the countryside.

With a large and well-rounded casual offering, it’s the soft Angora cashmere, knit jackets and Napa leather details that bring a fashionable indulgence to a sense of comfort and ease — these are outfits you’d imagine wearing while lounging by a fireside drinking rare Scotch from crystal tumblers.

A precise earthy, masculine palette reflects the rich tones of the Palazzo Te’s interiors, where some of the campaign is staged. The stories that unfold follow epic journeys into the Underworld, as told by Dante and Virgil.

The most impressive room is perhaps the Sala dei Giganti (the room of the Giants), where an uninterrupted fresco covers the entire interior walls and roof — a mesmerising depiction of Titans’ bodies twisting under collapsing structures, dominated the figure of an angry Zeus. Well, it wouldn’t be a Stefano Ricci collection without some classic alpha-male virility.

Enter the sophisticated suiting with formal checks — perhaps a nod to landed gentry and countryside living — where knit blousons and cashmere and silk blends show off the value of formidable fabrication, the bold Octagonal SR logo and all that nubuck croc offers a dash of ostentation.

This is also the season when the brand truly embraces logomania, a nod to wealthy millennial and Gen Z customers. There’s a more formal chapter of the collection, shot for the campaign inside the stunning confines of Teatro Bibiena in Mantua, famed for hosting concerts by Vivaldi, Verdi and, in 1770, a 13-year-old Wolfgang Amadeus Mozart. We few privileged guests of the Riccis have lunch served onstage that day.

This is a setting in which the slick Stefano Ricci tuxedos shine and provide a perfect silhouette. And elegantly ornate tuxedo options in silk and wool are offered with “mini-me” father-and-son styles — all in exquisite, truly rarefied patterned fabrics spun from the ancient silk looms at the Antico Setificio Fiorentino, owned by the Riccis themselves.

A hero coat with mink lapels dials up the luxe factor to make an entrance at grand balls, galas and concerts operas in a theatre such as the Bibiena, considered by Mozart’s father to be the most beautiful auditorium he’d ever seen.

Some of the collection’s formal- and eveningwear has taken a rather elaborate turn, as the whole world appreciates the significance of being able to don such clothing. The allegiance with music has been a long one, explains Filippo, and this location is just another celebration of the artistry that lies at the core of the Stefano Ricci brand.