The indomitable spirit and zest for life of modern Italy has its roots in the glory days of its ancient history.

The culture is famed for giving birth to the Renaissance era in Florence in the 14th and 15th centuries, but its stylistic heyday extended well into the subsequent Baroque period, when the epicentre of the art world was located in Rome.

While Renaissance art was defined by balance and symmetry, Baroque art from the 16th century right up to the 1800s became known for breaking the rules of the classical style, creating drama and movement, heightening tension and finding beauty in the unexpected. All the unique features of Baroque art – rich and deep hues, strong contrasts between light and dark, elaborate intricacy, a sense of volume and voluptuousness – are expressed here using the finest gemstones and craftsmanship. The creations are also broadly categorised into sub-collections named Meraviglia (wonder in Italian), Luce (light), Colore (colour), alongside one-of-a-kind creations.

Some pieces are transformable or can be worn various ways. Some showcase ultra-rare gems, such as Colombian emeralds from already defunct mines, that required years of globe-trotting by Bvlgari Jewellery’s Creative Director Lucia Silvestri to source and acquire. Luscious round pearls, popular during the Baroque period, are also featured. There is even a Serpenti Spell diamond bracelet-ring that combines the maison’s emblematic snake motif with a design referencing Indian henna tattoos.

The result is a collection that is as captivating as it is audacious, as eccentric as it is sophisticated, and as flamboyant as it is refined – which is how Bvlgari has distinguished itself time after time as a luxury jewellery house. This contemporary reinterpretation of an iconic aesthetic has spectacularly rewritten the rules of jewellery design and manufacturing, imbuing the pieces with a sense of joie de vivre that is sorely needed in the world we live in today. This masterpiece references Milanese artist Caravaggio’s theatrical artistry with its bold red pendant and juxtaposition of light and shadow. One of the most complex pieces in the Barocko collection, it required 1,500 hours to be made. Flaunting a rare 10-carat cushion Mozambique ruby centre stone accented with diamonds, this versatile creation hides a sophisticated mechanism that allows it to be detached into two separate necklaces. Recalling the curves and forms of Baroque marble sculptures by Gian Lorenzo Bernini, this ring achieves an alluring voluptuousness through a combination of gold, diamonds and rubies. 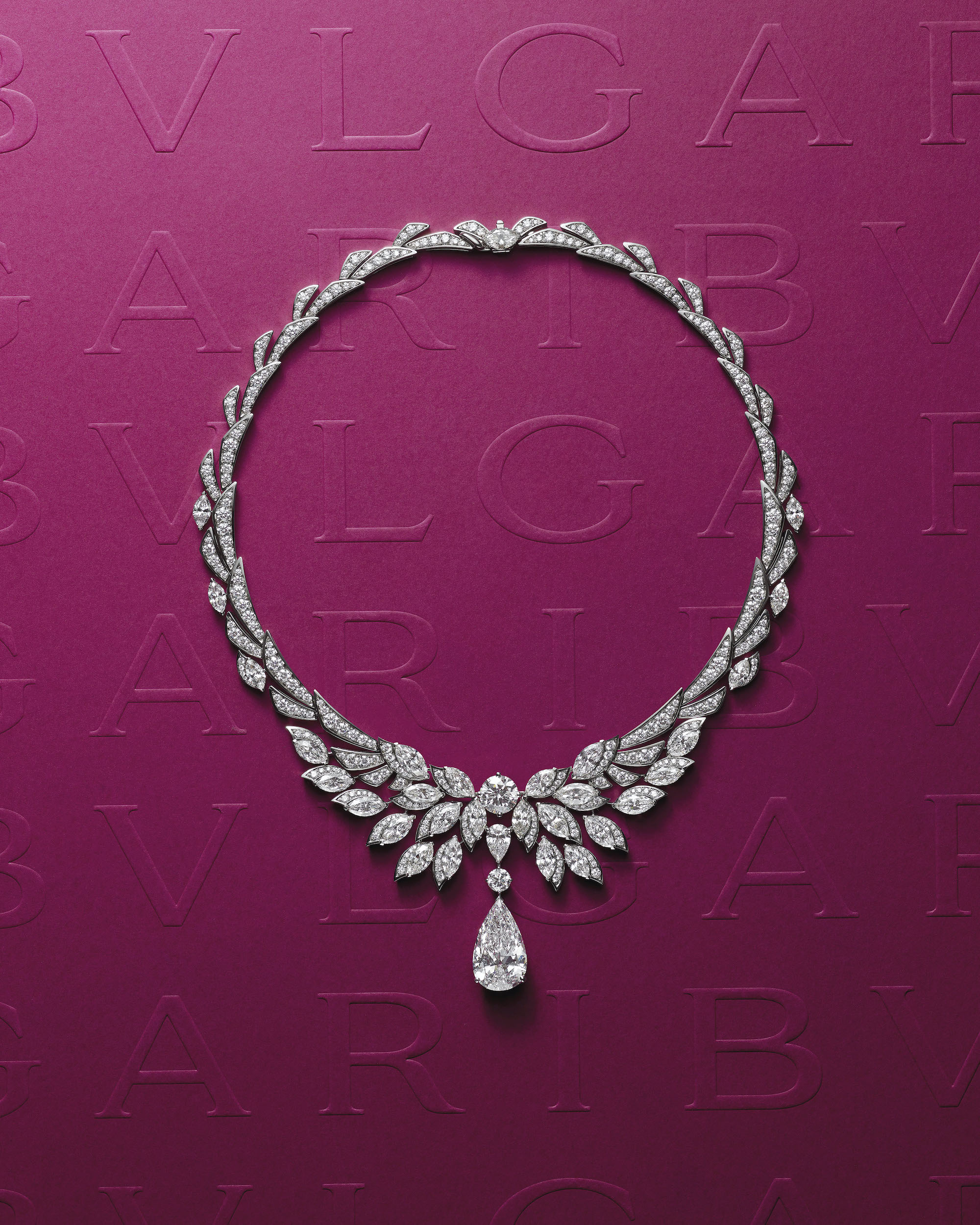 The outstretched wings of a bronze Archangel Michael statue atop the Castel Sant’Angelo is the inspiration behind this platinum necklace, which showcases an array of diamonds in marquise, round and drop cuts, creating a breathtaking, triple-layered 3D effect. With a design inspired by Rome’s Horti Farnesiani complex on Palatino Hill, this traffic-stopper is as whimsical as it is cosmopolitan. It features two tanzanites sourced in New York, rubellites and emeralds hailing from Jaipur, as well as aquamarines purchased in Hong Kong. (All other images: Bvlgari)

Style
By Prestige Editorial
Sign up to get the latest luxury and lifestyle news delivered to your inbox.
Yanni Tan
high jewellery

Chanel pays tribute to its iconic No 5 perfume with a 55.55-carat diamond necklace