Show-stopping, unapologetic and magnificently audacious – such were Bulgari’s high-jewellery pieces in decades past and they remain so today. The boldness of its designs, as well the vivacity of its colour combinations, have come to define the Italian maison’s unmistakable aesthetic. 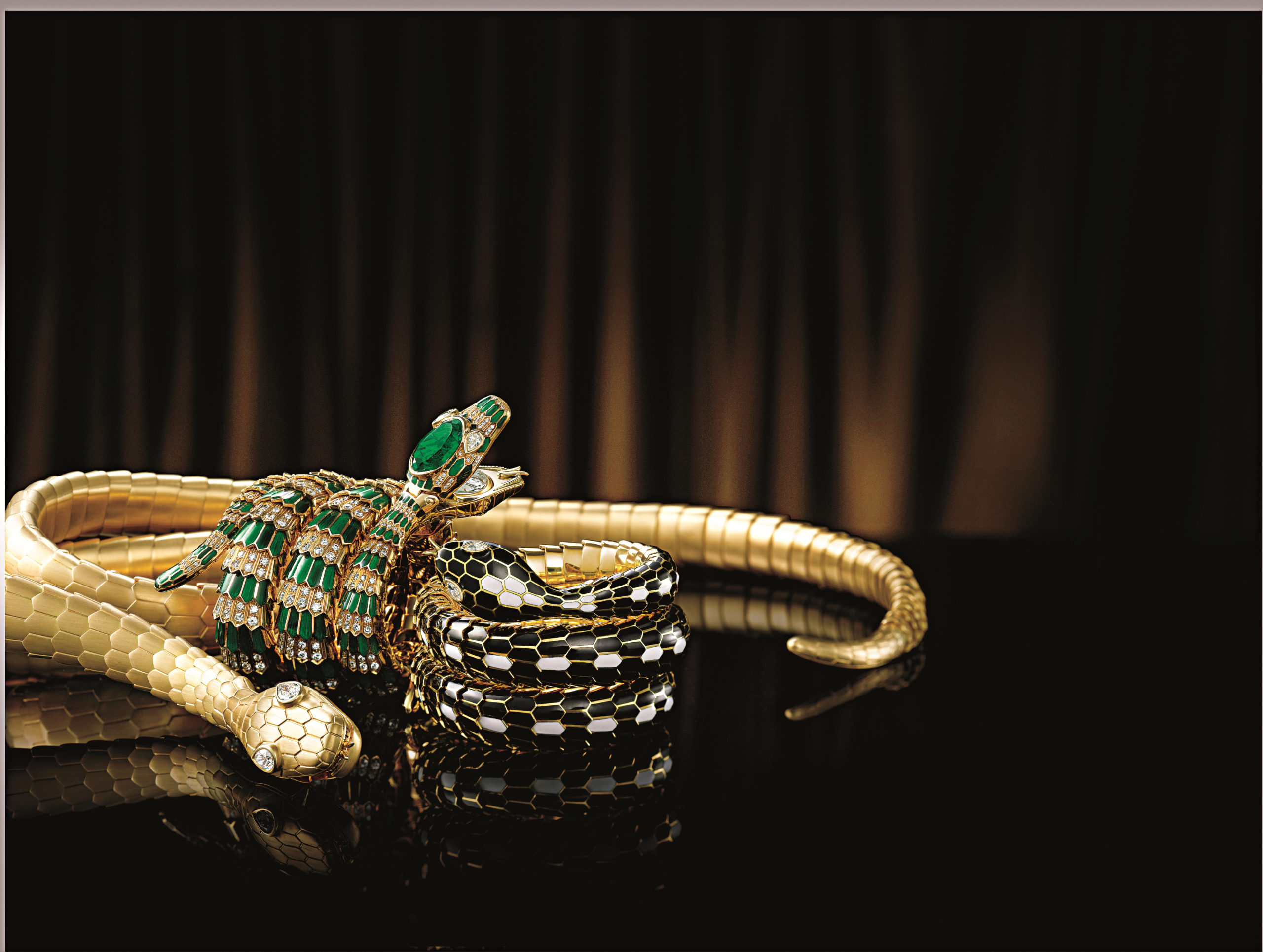 To date, Bulgari’s Heritage collection has more than 800 creations from the late 19th century to the early 2000s, which aside from jewellery includes watches and objects made in gold, such as cigarette cases, vanity cases and evening bags. And because the objective is to illustrate the evolution of the Bulgari’s style and craftsmanship over the decades and in the most complete way possible, its heritage department holds more than 60,000 documents, vintage photographs and original sketches, as well as editorials and historical advertising campaigns.

For its Master of Colours Heritage & High Jewellery Exhibition being held at their Chater House flagship boutique in Central, Hong Kong, the maison brought in some of its most prized and storied jewels from its archives. Here are some of the the pieces that caught our eye. This spectacular 1969 sautoir that features an astounding 127.35-carat, heart-shaped emerald pendant, and a chain set with cabochon rubies, amethysts, citrines, topazes, turquoise and emeralds, and enhanced with brilliant-cut diamonds is hailed within Bulgari’s Heritage team as one of their most exciting finds. Lucia Boscaini, brand and heritage curator for Bulgari, says of the piece: “This magnificent sautoir is a jewel so representative of the house’s unbridled creativity in the late 1960s and 1970s; it’s an explosion of colour and so exuberant also in terms of size as the chain is 860mm long,” she says. 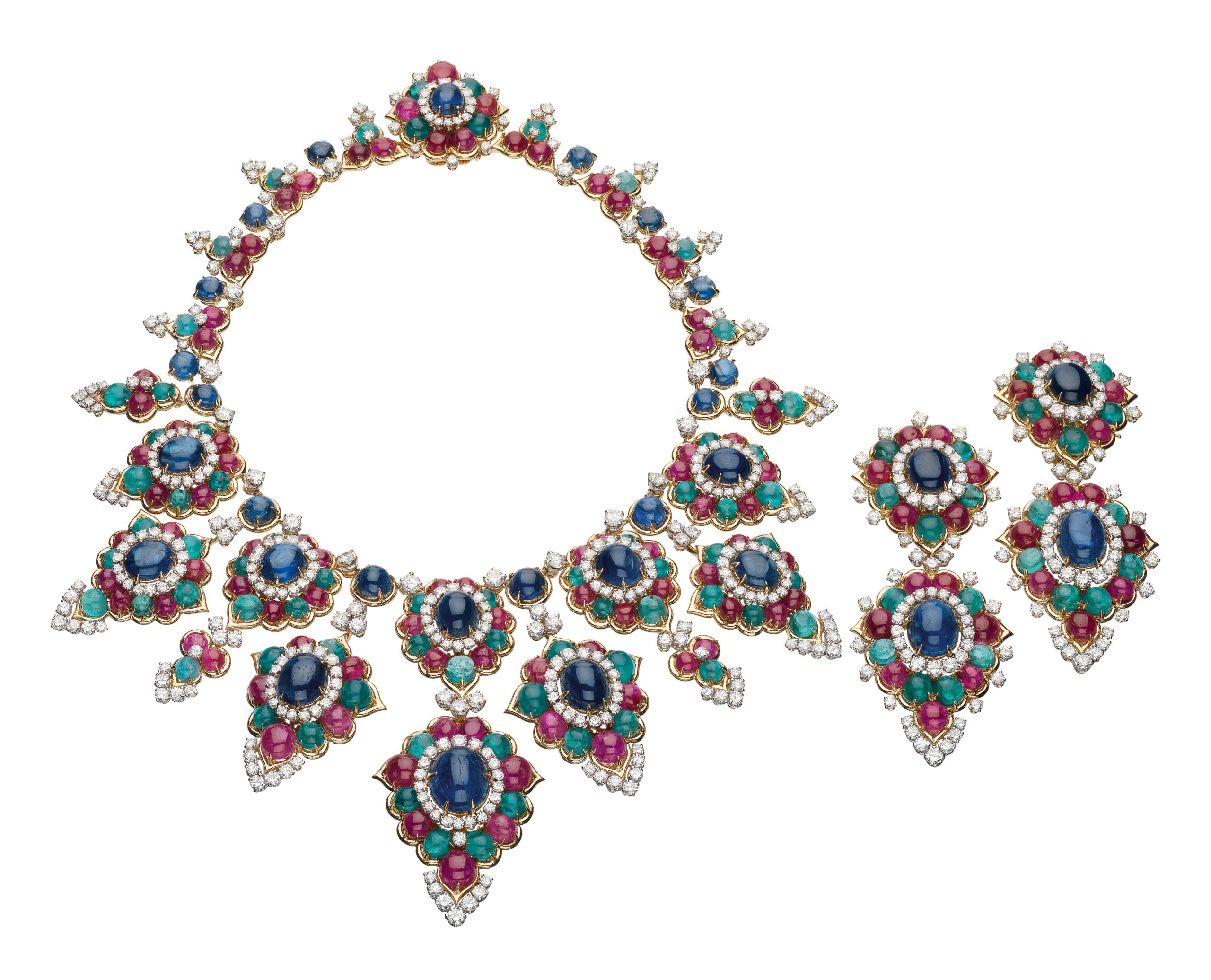 Bulgari’s love for colour was evident, even in its earlier pieces. “The larger-than-life attitude and the colours’ energy just takes over the jewel. The pieces are incredibly vivacious yet balanced, in the unmistakable alchemy that only Bulgari can bring,” Boscaini says. This 1967 necklace and earring set made in gold and platinum, and set with emeralds, rubies, sapphires and diamonds is one of the magnificent examples of Bulgari’s predilection for vibrant pieces featured at the exhibition, which showcases one of the brand’s most favoured colour combination: red, green and blue. “It’s a kind of magic, as these jewels really reflect the charisma of their owners,” Boscaini says when asked about provenance. Case in point, Elizabeth Taylor’s spectacular emerald necklace, which was given to her by actor Richard Burton in 1964 at their wedding in Montreal. The exceptional piece is mounted with 16 step-cut octagonal Colombian emeralds totalling 60.50 carats, each surround by brilliant-cut and pear-shaped diamonds.

The pendent, meanwhile, is a jaw-dropping 23.44-carat step-cut Colombian emerald, which was incorporated by Bulgari in 1958 as a brooch that Burton gave to Taylor on their engagement in 1962. The actress would be seen in this extraordinary piece on many occasions, such as at the 1967 Academy Awards when she accepted an Oscar, and on the set of the film The VIPs in 1963. And there’s this spectacular yellow-gold necklace set with a medley of gemstones, including emeralds, diamonds, amethysts and turquoises, which once belonged to American socialite and It-girl Lyn Revson, ex-wife of the founder of the make-up giant Revlon. “This piece is testament to our belief that regardless of the intrinsic value, we would combine semiprecious and high-value stones for the sake of an impactful chromatic effect. This is the colour revolution introduced by Bulgari that subverted the rules in jewellery and marking a watershed in the decades to come,” Boscaini shares.

Lyn had a particular sense of style and sometimes worked as a model, and in the 60s and 70s, Lyn was one of the most photographed women and a fixture on best-dressed lists. After her divorce she reinvented herself and published her own fashion manual, “Lyn Revson’s World of Style”. Her fondness of couture and her legendary collection of handbags, made her wardrobes amongst the most fashionable and enviable ever. The first Bulgari Serpenti creations date back to the late 1940s, where its early creations presented the snake motif in a highly stylised manner, with coils made either using the “tubogas” technique or in gold mesh that wrapped around the wrist. In the mid-1950s, the snake was represented in a more realistic way, executed in satin gold, coloured enamel, precious stones and hard stones like jade to shape the serpent scales in infinite variations crafted with meticulous attention to detail.

Some of the most fashionable women in history owned a Serpenti, including Elizabeth Taylor and Diana Vreeland, who loved to wear her customised Bulgari snake belt doubled up as a necklace. The 1965 Serpenti bracelet-watch pictured here is made in gold with red and green enamel and set with diamonds. It typically takes 20 hours to complete enamel work like this.

Pursuits
Sign up to get the latest luxury and lifestyle news delivered to your inbox.
Bvlgari
Charlene Co