Love is a many splendoured thing, as are these romantic gemstones that aren’t only exquisite in their own right but boost love  and relationships with their energies 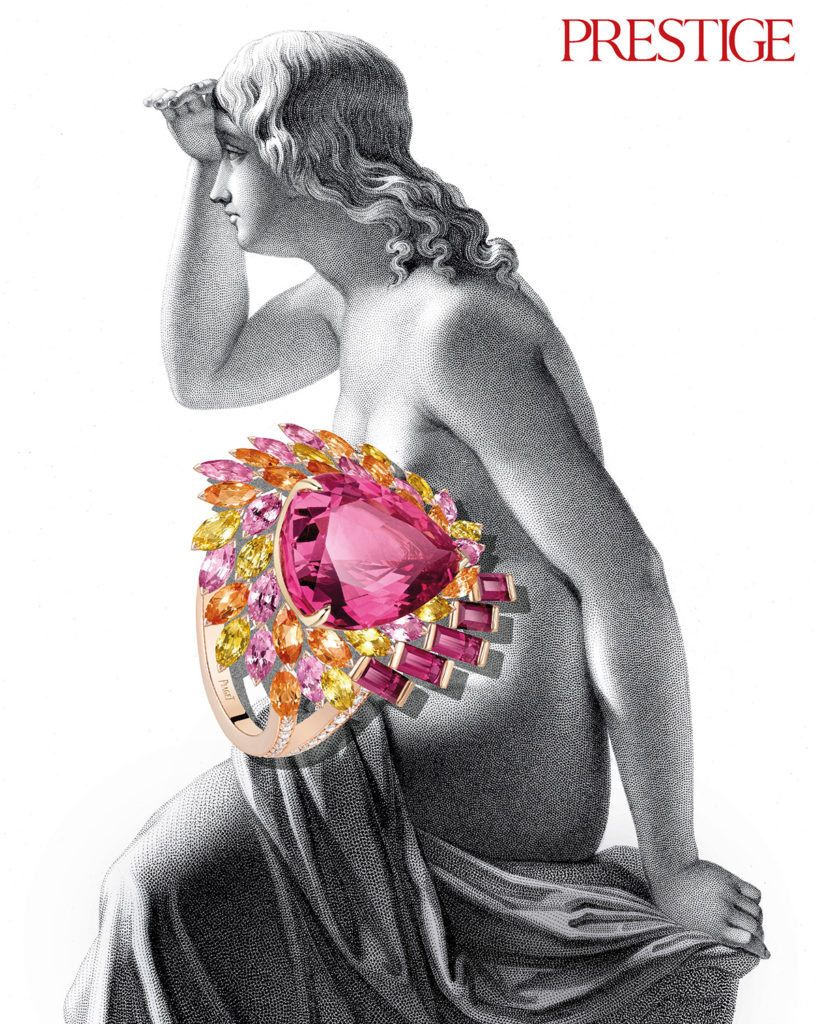 PINK SPINEL
The spinel’s name is derived from the Latin word spina, meaning spine. It refers to the mineral’s needle-like formations of small octahedron-shaped crystals. A stone that condenses bright and positive energy, it offers encouragement when you’re experiencing relationship challenges. Spinels are also said to foster a spirit of gratitude brought about by the realisation that love is a gift. Piaget Wings of Light Rainbow Jungle Ring in rose gold with a 6.82-carat pear-shaped pink spinel, pink and yellow sapphires,  pink tourmalines, spessartites  and diamonds 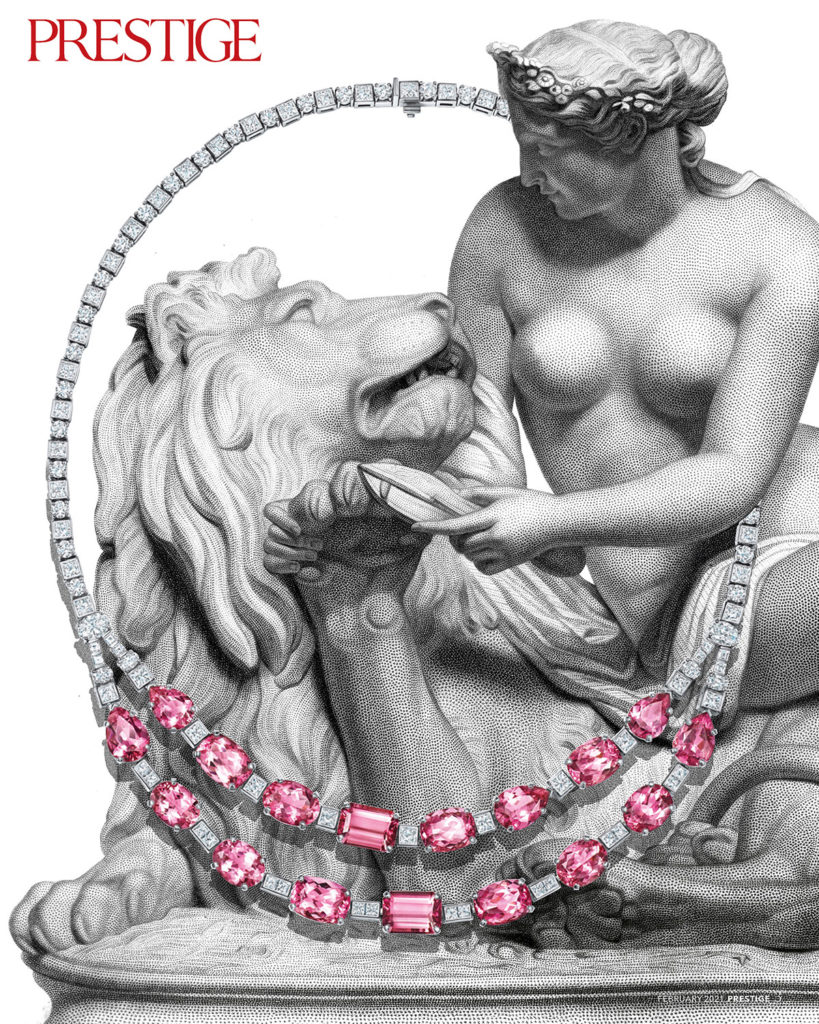 PINK TOURMALINE
The tourmaline gained popularity as an American gem in 1892 thanks to Tiffany & Co. gemologist, George F. Kunz, who wrote about the quality gemstone deposits discovered in Maine and California. Ranging from pale pink to deep red, this gem is favoured by metaphysical collectors and practitioners for its versatile energy properties. It is believed to enhance love and spirituality, and encourage compassion and gentleness in periods of growth and change.
Tiffany & Co. Extraordinary Tiffany: High Jewelry Collection 2020 platinum necklace with over 50 carats of vivid mixed-cut  pink tourmalines and over 14 carats of diamonds PINK DIAMOND
Nothing evokes romance more than the pink diamond, which is associated with love, delight, tenderness and innocence. And like true love, pink diamonds are rare and mysterious as they are found in only a few locations and scientists have yet to determine what exactly causes a diamond to be expressed in this pastel hue. Not only does this stone symbolise femininity and creativity, it represents resilience and endless affection, making it a popular choice for engagement rings.
Chopard Red Carpet Collection 2020 Flamingo earrings in pink titanium with pink diamonds totalling 18.4 carats, diamonds and onyx 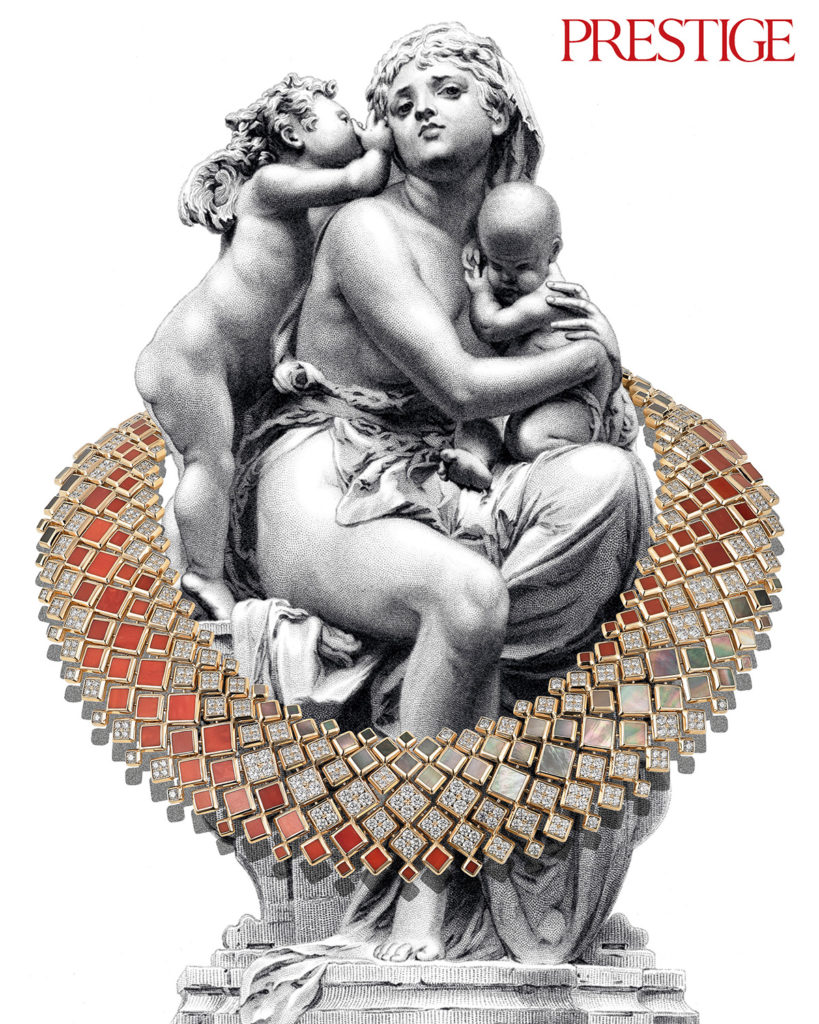 RED CORAL
Although coral occurs in a wide range of colours, red is the most sought-after hue with only two types of coral that can be made into jewellery: corallium japonicum and corallium rubrum. Coral gives you the power to overcome relationship obstacles and be a pillar of strength for your significant other. It is said to be able to temper anger, impatience and frustration, encouraging open and honest communication between a couple.
Cartier [Sur]Naturel pink gold necklace with coral, grey mother-of-pearl and diamonds PINK SAPPHIRE
This stunning gemstone that ranges from light to dark pink also features secondary hues such as purplish-pink and even a glowing orangey-pink, as in the case of the rare padparadscha sapphire, which is mainly found in Sri Lanka. It is a symbol of love through the ages, with its use as a betrothal gift dating back as far as the time of ancient Rome. Symbolising trust, loyalty and sincerity, the pink sapphire is also believed to bestow good fortune.
Van Cleef & Arpels Romeo & Juliet Innamorato bracelet in rose and white gold with 18 pink and mauve oval-cut sapphires totalling 70.23 carats, pink and mauve sapphires and diamonds RUBELLITE
Among the most prized and priciest stones from the tourmaline family is the rubellite. While it’s also known as red tourmaline, only the most vivid and saturated specimens are worthy enough to be classified as rubellites. This stone works to clear the communication channels between a couple to bring stability and security to their relationship.
Bvlgari Barocko yellow gold necklace with a 58.02-carat cushion-shaped rubellite, a 3-carat pear-shaped diamond, two marquise diamonds weighing 2.04 carats, five round emeralds totalling 3.31 carats and round brilliant-cut and pavé diamonds with a combined weight of 19.27 carats 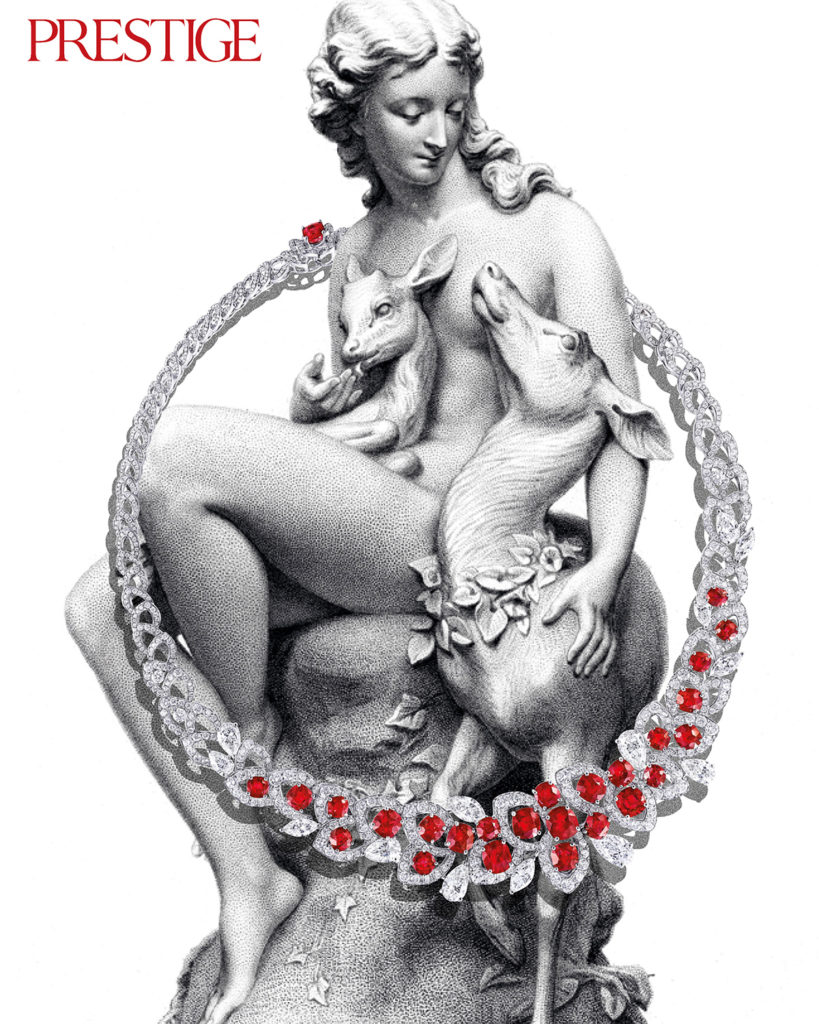 RUBY
Hailed as the gem of gems throughout history and favoured by royalty across cultures, this rich crimson stone is said to be the most powerful of them all. Representative of love through the ages, the ruby is said to inspire faithfulness and devotion in a romantic relationship. French jewellers in the 1800s referred to it as the “dearly loved stone”, whose fiery red hue was said to arouse the senses, stir the imagination and inspire sensuality in its wearer.
Graff Peony Collection white gold and platinum necklace with multi-shaped rubies and diamonds