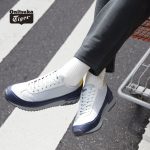 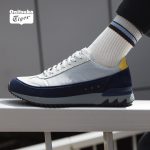 THE HISTORY OF A JAPANESE ICON

A 32-year-old former military officier, Kihachiro Onitsuka, founded Onitsuka Co. Ltd. in 1949, in the hopes of raising post-war youth self-esteem through athletics. He began to produce sneakers for students in schools, which had been in short supply after the end of the war. His first shoe product was a basketball shoe that resembles a straw sandal. In 1952, Onitsuka produced an even more effective design by adding cups and small spaces in the soles of his basketball shoes.

In 1953, Onitsuka worked with marathon runner Toru Terasawa to develop a running shoe that would keep long distance runners from developing blisters. Onitsuka Tiger shoes also teamed up with Abebe Bikila, an Ethiopian marathon runner who was known for his barefoot style, to wear shoes for the first time in his running career.

In 1955, the company gained nationwide popularity and opened up to 500 sports shops across Japan. The company enjoyed success on the global stage especially during the 1972 Munich Olympic Games when runner Lasse Viren, who won the world-record time, took off his Runspark shoes and waved them to the crowd.

Today Onitsuka Tiger is synonymous to Japanese ingenuity. It is a national pride, a world-renowned Japanese icon. With products known for advanced ventilation technology and supreme comfort, it’s no surprise that its clientele ranges from the royals to A-list celebrities. We personally can attest to the brilliance of the Onitsuka Tiger California 78 EX. It has good arch support.

Following the huge success of last year’s HSINCA (a combination of the shark sole of the California 78 EX and the upper of the Tiger MHS), designer Andrea Pompilio released HSINTI.

What’s special about the HSINTI is its sleek and minimalist upper design and the chunky-comfy sole. The shoelaces have been made subdued for an easy-to-coordinate look.

The upper heel comes in a color accent with the Onitsuka Tiger logo. The Ortholite inner sole offers superior cushioning.

What could be possibly better than running errands in the chicest sneakers that feels light and airy? These stylish kicks don’t only look super trendy, they’re obviously made to cater to the busy lives of the modern Prestige woman.

The HSINCA sneakers are now available in selected Jakarta online stores. Don’t miss out on wearing the coolest kicks in town—shop it now at MAP E-Mall or Zalora!