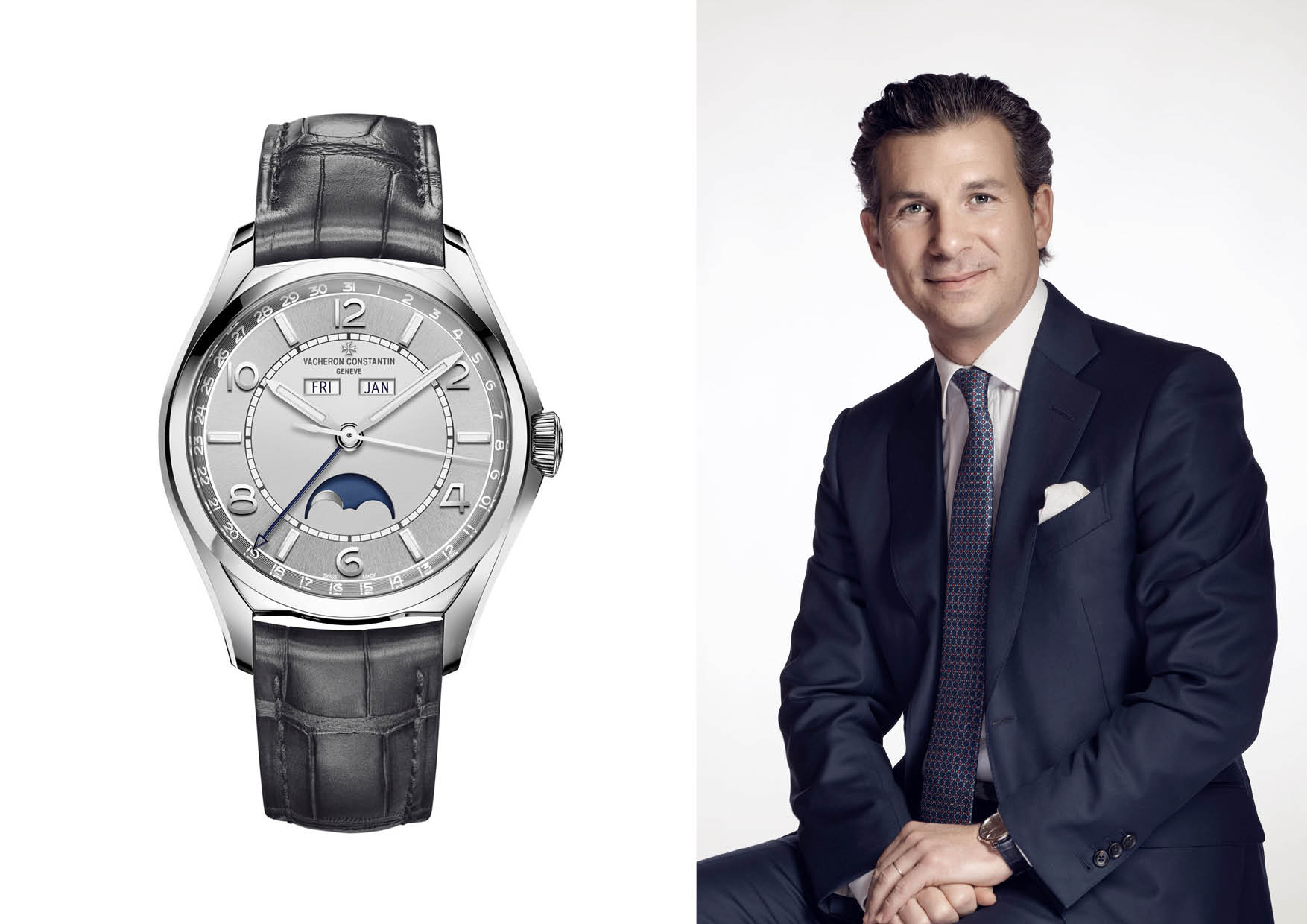 Fine watchmaking is an exclusive world, with precision, perfection and exquisite finishing being the order of the day. It takes more than deep pockets to enter this club, and the requirements can be abstract. So how does a leading name such as Vacheron Constantin invite a new audience without being too accessible? To this point, CEO Louis Ferla shares that the brand received far more orders than they can fulfil at the recent 28th Salon International de la Haute Horlogerie, and had to turn away some orders. “We had a very, very good fair,” says Ferla. “We ended up having to apologise to our clients.”

Louis Ferla, who joined the company in October 2016 as managing director, has been CEO of Vacheron Constantin since April 2017. The Frenchman’s career in the Richemont group began in 2001, taking him across Asia and the United Arab Emirates from Alfred Dunhill (2000-2006) to Cartier (2006–2016). With more than 17 years in the luxury sector, Ferla is no rookie in this game, and Vacheron Constantin has enjoyed great progress under his leadership.

Last year, it launched the highly complex Les Cabinotiers Celestia Astronomical Grand Complication. Packed with 23 complications, including seasons, solstices, equinoxes, zodiac signs and even a tide level indicator, the timepiece snagged the Mechanical Exception Watch Prize at the Grand Prix d’Horlogerie de Genève. “It’s too early to really say we are where we should be, but we have a lot of good news,” Ferla says, adding that there are plans to continue developing the Les Cabinotiers line. “We have a fantastic business on that segment.”

This year is also building up to be incredibly significant for Vacheron Constantin, with the launch of a new Fiftysix collection comprising three models: Self-Winding; Day-Date, and Complete Calendar. Inspired by the iconic Ref 6073 — known as among its first models to be driven by an automatic movement — from 1956, Fiftysix (named after the year) is a nostalgic expression revived by new movements and a modern aesthetic, including the original Maltese-inspired lugs that now bear a streamlined, contemporary finish. Each of the three models, available in either pink gold or steel, is fitted with different movements. All are lavished with a new, openworked Maltese cross-shaped oscillating weight in 22k pink gold, hand-finished and designed specifically for the Fiftysix collection. “This gives [the watches] a lot of perceived value,” Ferla points out.

More significantly, its base model, the Fiftysix Self-Winding, is being introduced as the brand’s most accessible watch yet. Driven by a new automatic Calibre 1326, which is visible from the case back, this entry-level offering provides a gateway to Vacheron Constantin, especially with its steel version. Despite being marketed as the most affordable Vacheron Constantin timepiece yet, Louis Ferla stresses that no shortcuts were made:  “We do not compromise on aesthetics and quality,” he says emphatically. “The level of finishing that we put into Fiftysix is the same as all our collections. We want to ensure that we respect the DNA and codes of Vacheron Constantin.”

On the other end of the price spectrum of Fiftysix is the Complete Calendar, with a streamlined, classic aesthetic that showcases its triple calendar layout. Two apertures display the day and month respectively, while the date is indicated by a ticking blue hand. At 6 o’clock, the moonphase indicator shows a blue night sky, embellished with an 18k gold moon — in pink gold for the pink gold version, or white gold for the steel. The watch is powered by the manufacture calibre 2460QCL/1, with the moonphase function adjustable every 122 years.

Louis Ferla describes Fiftysix as a stepping stone before one advances to the brand’s more iconic collections. “I consider my role to be one that opens the door [to Vacheron Constantin], but not to a very large number of people because we produce very limited quantities. We want to engage people, so that they can understand what Vacheron Constantin is and what we are doing. We don’t want [the Fiftysix] to be our main business — this remains the Cabinotiers or Metiers d’Art collections, for example. What we want is for people to enter the universe of Vacheron Constantin and explore it.”

One surprise Ferla encountered since joining Vacheron Constantin is the brand’s relatively young clientele. “Our watches are expensive in absolute value, but the average age range of our customers is below 40, which is very promising for us in the future,” he says.

Considerable effort is being made by the brand, which enjoys a presence on every social network, to reach out to an even younger generation. “We have to talk to millennials and we use many forms to communicate,” says Ferla. “We give a platform not only to millennials, but for young people in general to get more information about Vacheron Constantin. You can’t expect people to spend a high price without first doing some research,” he says.

Louis Ferla recalls an online experiment that was undertaken in early 2017 with the Historiques Cornes de Vache 1955 Limited Edition watch. Exclusively available on the Hodinkee website, all 36 pieces of the chronograph were snapped up in under 30 minutes. Yet, despite the advent of online shopping and the fervent reception of those watches, Ferla does not think e-commerce will ever replace the experience of stepping into a Vacheron Constantin boutique. “I think many of our clients still want to touch, feel and see the product, so we need to offer them the opportunity to do so in a qualitative way,” he shares.

Although Vacheron Constantin has a storied heritage and a long history that goes back more than 260 years, the watchmaker does not rest on its laurels. “If you don’t innovate while the world progresses, you’ll wake up one day and everybody is ahead of you,” Ferla muses. This belief in innovation is one he applies in his own life. After graduating from the International Business School 3A in Lyon at the top of his class, Louis Ferla headed East to the National Taiwan University, where he studied Chinese full-time.

“It was not a business strategy but a personal choice,” says Ferla, who had started studying Chinese while he was still in Europe. “I felt that this part of the world had a lot to offer, on both the personal and professional levels. When you don’t understand a country’s language, it’s very limiting. You miss out on so much. If you want to engage with the culture, you have to make the effort to learn the language. I’ve spent 17 years of my life in Asia, and you can spend all your life here without speaking Chinese. But knowing the language provides a different experience.”

He picks out another novelty for the year, the deceptively simple Traditionnelle Complete Calendar Excellence Platine. Its  all-platinum aesthetic is expressed from case to dial and moonphase (there’s even platinum on the strap stitching!) and highlights the inconspicuous yet significant details of the watch.

“It is a relatively simple watch from far,” Ferla says. “But when you look at the level of complication, it’s quite amazing. Though we are a traditional manufacture, we are also very innovative. We respect the codes of haute horlogerie but we constantly try to push the limit, whether in the finishing or from a technical point of view. We have to continue to do new things but stay true to our values.”