When Cartier introduced the Santos-Dumont timepieces powered by quartz movements last year, it looked set to complement the existing Santos collection, in terms of price points and style.

Named after Brazil’s aviation pioneer, Alberto Santos-Dumont, the maison’s founder Louis Cartier first created the Santos-Dumont in 1904 as a timekeeping companion while in flight for his industrious friend. In essence, the Santos-Dumont might have been the world’s first pilot’s watch, even though its elegant and slim profile may not instantly remind one of such, especially when compared to today’s contemporaries. At Cartier Watchmaking Encounters, not only did Cartier unveil three XL models of the Santos-Dumont fitted with manual-winding movements, it also presented four highly exclusive limited editions. With the accelerated development, it seems Cartier has high hopes for the Santos-Dumont collection and this year appears to be the year the collection is growing into its own.

Last year’s Santos-Dumont, available in large, whose case measures 43.5mm x 31.4mm, and small at 38mm x 27.5mm, was built on versatility where the watch regardless of its size would look impeccable on either gender. Without overtly masculine or feminine, it was easy on the eye but just as effortless to own with a quartz movement that can last up to six years before a replacement of its battery needs to be sought. The XL models, however, have an entirely unique disposition. Boasting a case dimension of 46.6mm x 33.9 mm, few individuals have the right wrist to pull it off. Size does matter here. For those who are undaunted, case materials in 18k pink gold, 18k pink gold and steel, and steel await. They are powered by the in-house 430 MC manual-winding movement, which unlike a quartz or an automatic movement, requires more nurturing and care. With 38 hours of power reserve, you are expected to wind the watch almost on a daily basis. It is perhaps why a manual-winding watch is often regarded as a connoisseur’s watch.

Similarly, the four limited editions are destined to be collectors’ items where each of them celebrates the creations of Santos-Dumont, the visionary. On each caseback, a sketch of Santos-Dumont’s original plans is engraved to join the dots of the historical relationship between man and skies.

Made of platinum and paired with a silvered dial, the Santos-Dumont “Le Brésil” pays homage to Santos-Dumont’s very first flying machine Le Brésil. Unveiled on 4 July 1898, according to the aviator, he regarded the consequential design as the smallest yet the most beautiful. It would spawn a series of airships numbered one to 22 between 1898 and 1909, as the world watched on in anticipation.

The watch itself is a statement of intent as platinum is perhaps the most precious of all precious metals used in watchmaking, where it is sporadically found on exclusive commemorative pieces. The case measures 43.5mm x 31.4mm. The crown is further adorned with a ruby, which only a handful of select Cartier watches are blessed with. Equipped with an in-house 430 MC manual-winding movement, the Santos-Dumont “Le Brésil” is limited to 100 pieces and paired with a grey alligator leather strap.

The second limited edition, the Santos-Dumont “La Baladeuse” exudes vintage charm as Cartier complements its 18k yellow gold case with a champagne dial to bring out a soft glow, further elevated by the green patinated alligator leather strap. The case is identical to the large model at 43.5mm x 31.4mm, wherein beats the in-house 430 MC manual-winding movement. The crown is set with a sapphire cabochon, complementary to its blued hands. A total of 300 numbered examples are produced.

Named after the single seater intended for Santos-Dumont’s personal use, La Baladeuse was a demonstration of the benefit of having a private flying machine to commute in urban areas. Santos-Dumont crossed the Parisian skies in 1903 in this airship. The act was a prognostication of the future where “aerial omnibuses will transport tourists and business travellers,” he was quoted as saying.

The Santos-Dumont “Le 14 Bis” pays tribute to the n°14 bis, which was described as a kite of compartments courtesy of its complex design. The flying machine bore the semblance of today’s aircraft where the pilot was stationed in the fuselage, which was connected to the rudder and fins through cables. The n°14 bis would claim the Archdeacon Cup on 23 October 1906. Later in the year, on November 12, it won the Aéro-Club award where Santos-Dumont became the first aviator to officially complete a flight of 220 metres.

The watch celebrating Santos-Dumont’s achievement comprises a bi-material case. The 43.5mm x 31.4mm case marries a steel overall with an 18k yellow gold bezel. The breadth of colour is amplified with an anthracite grey dial and gilded steel sword-shaped hands. The crown features a blue synthetic spinel. The heart is an in-house 430 MC manual-winding movement. Limited to 500 pieces, the watch comes with a grey alligator leather strap.

The most elaborate of all limited editions, the Santos-Dumont “La Demoiselle”, apart from the watch, is retailed alongside a luxurious ensemble of a box, a pouch and a pair of cufflinks. The accessories are not sold individually. As the sole XL variant of the four limited editions, the watch case measures 46.6mm x 33.9mm. It is made of platinum and possesses a ruby-set crown. The best feature is arguably the ivory-coloured, off-white dial which looks as though it has been aged. The inspiration arises from the panama, a signature hat worn by Santos-Dumont. It is further evident in the square centre of the dial where it contains the motif of the weave. For eagle-eyed connoisseurs, Cartier has replaced the word Cartier at one of the branches of the VII hour marker, in favour of the word Santos.

Created in 1908, “La Demoiselle” is Santos-Dumont’s most accomplished flying machine, and one of the first aircraft to be mass produced. He enthused that Europe would soon unfold “at our feet like a geographical map” as we sailed through the air.

The Santos-Dumont “La Demoiselle”, powered by the in-house 430 MC manual-winding movement, is available in 30 numbered pieces. Each is presented in an exquisite lacquered maple wood box whose interiors are sumptuously lined with linen canvas and Chamel Eco Black. The box has dedicated compartments for a brown alligator leather travel pouch, which is especially useful if you travel with more than just the watch on your wrist, and rhodiumised 18k white gold and red tiger eye cufflinks to dazzle. As for the watch itself, it comes with two strap options – a dandy made-to-measure Panama-weave fabric strap and a classic brown alligator leather strap. 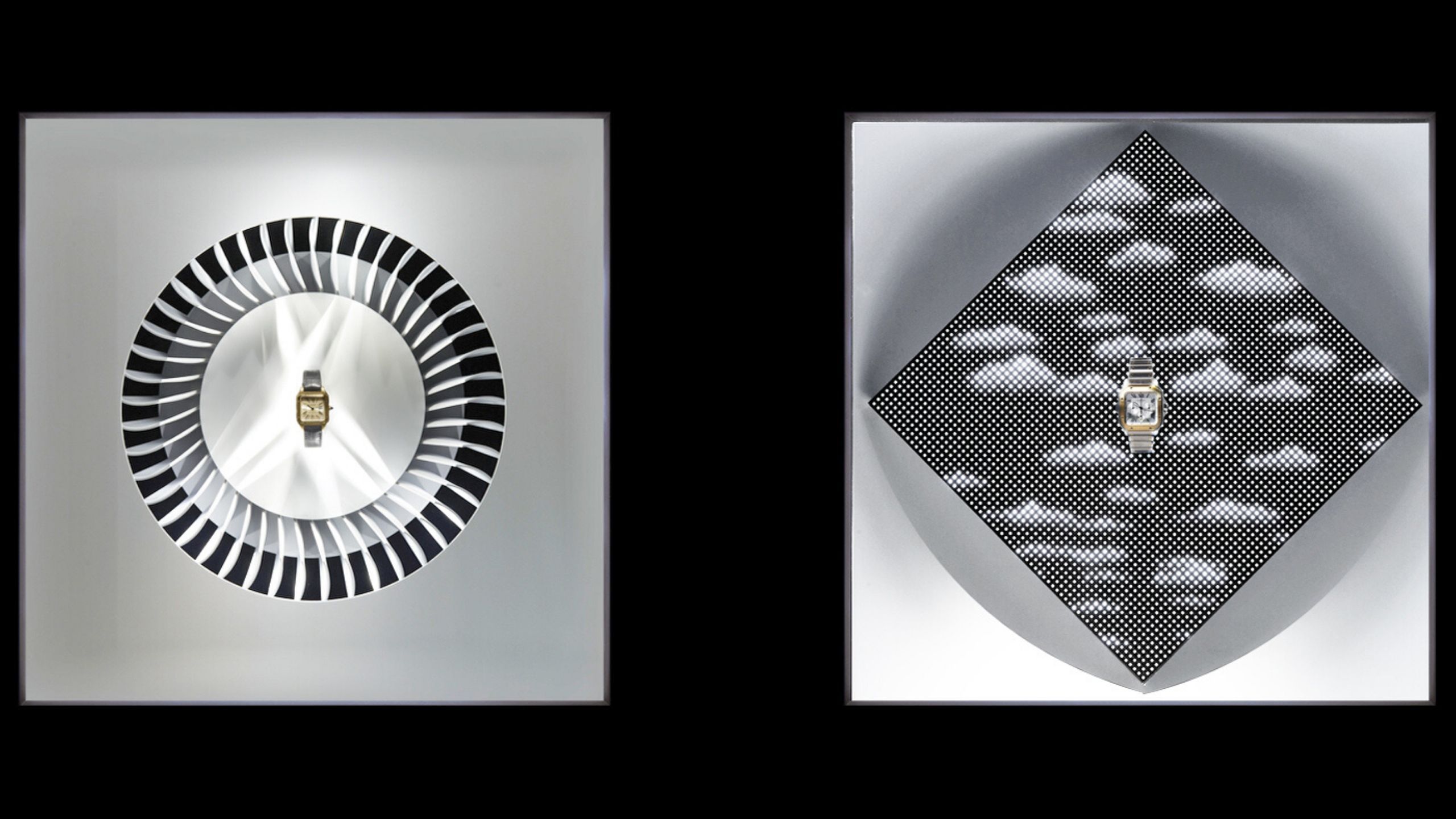