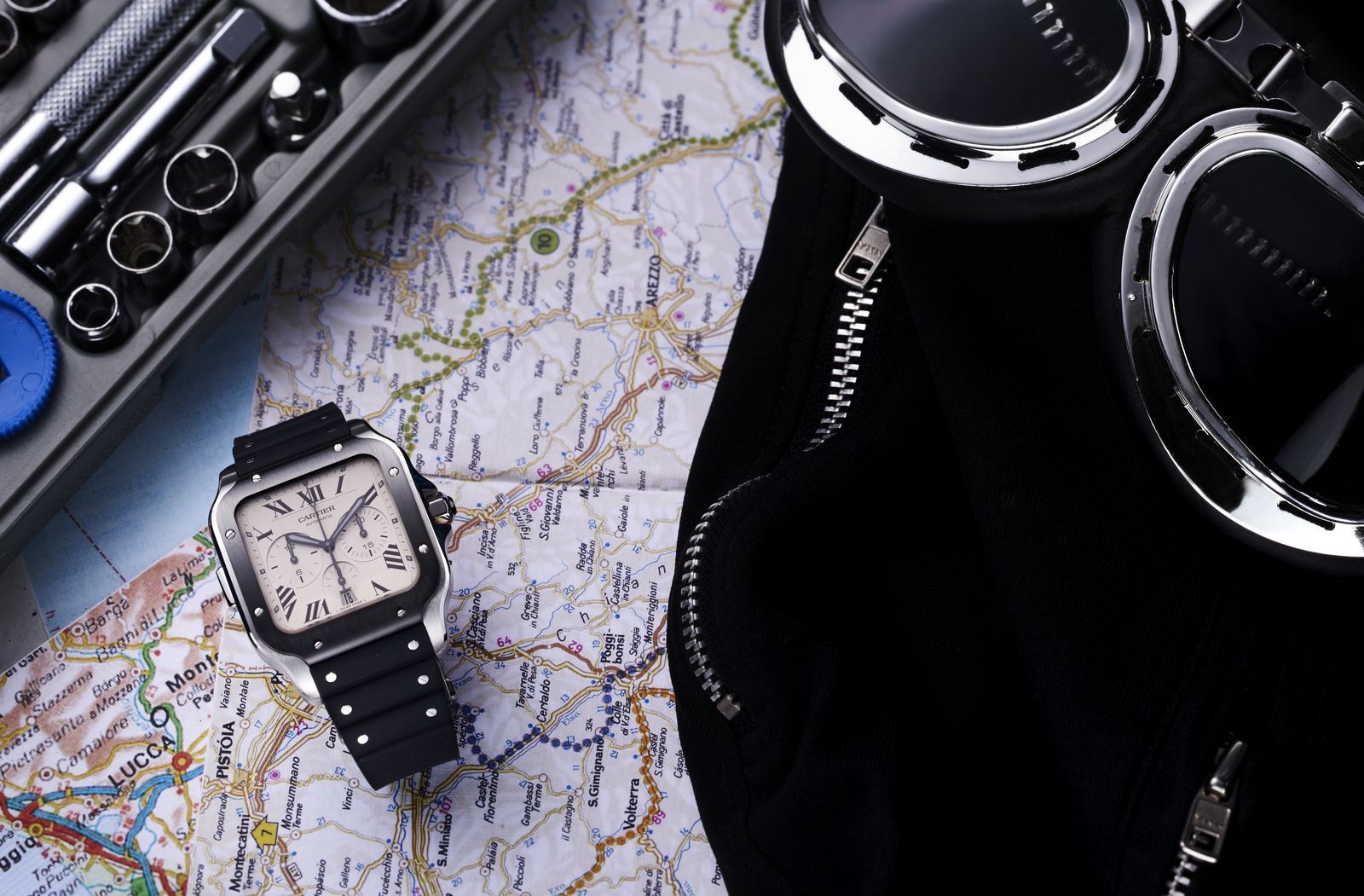 The Cartier Santos has the enviable title of being the first-ever men’s wristwatch to enter full-scale production in 1911.

As the saying goes, necessity breeds innovation. The Cartier Santos was created to fulfil a specific purpose – to tell the time while flying. Brazilian aviator Alberto Santos-Dumont had complained to his friend and watchmaker Louis Cartier about the impracticality of using a pocket watch while manoeuvring in the sky. So, in 1904, Monsieur Cartier designed for Santos-Dumont a flat watch with a square bezel that could be worn on the wrist.

Prior to this trend-setting sartorial move, women were already wearing wristwatches. For men, however, it was considered unmasculine. But what could be more masculine than wearing a wristwatch while risking your life in the air in order to propel the aviation field to where it is today?

The story of the Santos

The sports watch trend as we know it today really started in the 1970s when Gerald Genta designed the Audemars Piguet Royal Oak, and the Patek Philippe Nautilus soon after. To capitalise on this, Cartier took the Santos-Dumont, renamed it succinctly to Santos and gave it a stainless steel case and bracelet.

It was a radical move by the maison, which was more known for working with precious metals up till then. Cartier also used gold on the outline of the case and the screws on its bracelet to retain that sense of luxury. It was, for all intents and purposes, the iteration of the first modern Santos that you see today.

This model became extremely popular for its two-tone design in the 1980s, notably in the financial world where bankers and their ilk would wear the watch with their pinstripe suits and driving shoes.

Alas, the Quartz Crisis, which lasted more than two decades, was then in full effect. Although Cartier tried to remain relevant by releasing a quartz-powered Santos named the Galbée, the collection didn’t do well as a whole, and slowly faded from public attention.

Then, in 2004, Cartier released the Santos 100 collection to commemorate the centennial anniversary of Louis Cartier’s first men’s wristwatch that he had created for his aviator friend.

While it retained the design codes of the Santos collection – the square case, screws on the bezel and Latin numeral hour indices on the dial – the new Santos 100 wasn’t so much the spiritual successor as it was the family cousin who wanted to make a large and very loud statement.

Last year, after more than a decade of staying quiet in the side lines, the Cartier Santos returned with a bang. The maison unveiled not just one, but 13 watches in two sizes – medium and large.

Many of the old design cues were present, but updated for a new generation. The lugs and cases were curved to sit better on the wearer’s wrist, while the new sizes were on the whole larger compared to past models, to better fit the tastes of consumers today. Still, if you put the old Santos-Dumont from the turn of the 20th century next to today’s Santos models, you will see how everything falls into place.

This year, Cartier updated the Santos collection by adding a new chronograph edition (main picture) that’s unlike any others we’ve seen. Instead of slicing the original Santos open to squeeze in a typical chronograph movement, Cartier found an aesthetically pleasing solution. The maison modified its existing 1904-CH MC calibre such that the chronograph’s start and stop push button is on the left-hand side of the case, while the reset pusher is integrated into the crown. This maintains the sleekness of the design, and the case’s iconic outline.

The Santos Chronograph comes in either stainless steel with a black PVD-treated steel bezel, stainless steel with a yellow gold bezel, or rose gold. It is only available in the maison’s extra large size, which measures a rather bulky 43.3mm by 51.3mm, but the curved lugs ensure that the watch wraps around your wrist instead of floating on it.

Cartier also fitted the watch with its ingenious QuickSwitch and SmartLink systems (technical terms for a luxury maison, we must admit). Bracelets used to be a foregone conclusion with other manufactures: You’d get it fitted at the boutique when you first buy your watch, and return if you ever need to change its length. With the SmartLink system, you can easily make any adjustment yourself without any special equipment. It’s quite a revelation, to put mildly.

Similarly, the QuickSwitch system allows you to, as its name suggests, switch between the bracelet or leather strap without fiddling with tools.

These are all very clever innovations from Cartier, but creativity has always been in the DNA of the French maison. After all, it was the first brand to create a men’s wristwatch back in 1904, and the one Alberto Santos-Dumont chose to wear on his wrist when he took to the skies.

Farhan is the managing editor of Augustman Singapore