With a free-spirited and impertinent vision of mechanical watchmaking, the maison offers a watch with a unique vision of Earth’s satellite

One of the latest creations to come from the famed La Montres Hermès perfectly showcases the maison’s watchmaking expertise. Named the Arceau L’heure de la lune, this timepiece unveils a unique vision of Earth’s satellite with a simultaneous display of moon phases in both the northern and southern hemispheres. To top it off, there are also two mobile counters that gravitate on a Lunar, Martian or Black Sahara meteorite dial, revealing mother-of-pearl moons in step with a module exclusively developed for Hermès.

We can see upfront at 12 o’clock, the moon is adorned by a depiction of Pegasus, which is designed by Dimitri Rybaltchenko. Titled Pleine Lune (Full Moon), this portrayal of the winged horse—representing the origins of Hermès—hints at a passage between two worlds, where magic and reality merge. On the other hand, at 6 o’clock, the view of the moon from the aforementioned northern hemisphere provides a realistic depiction of its surface. 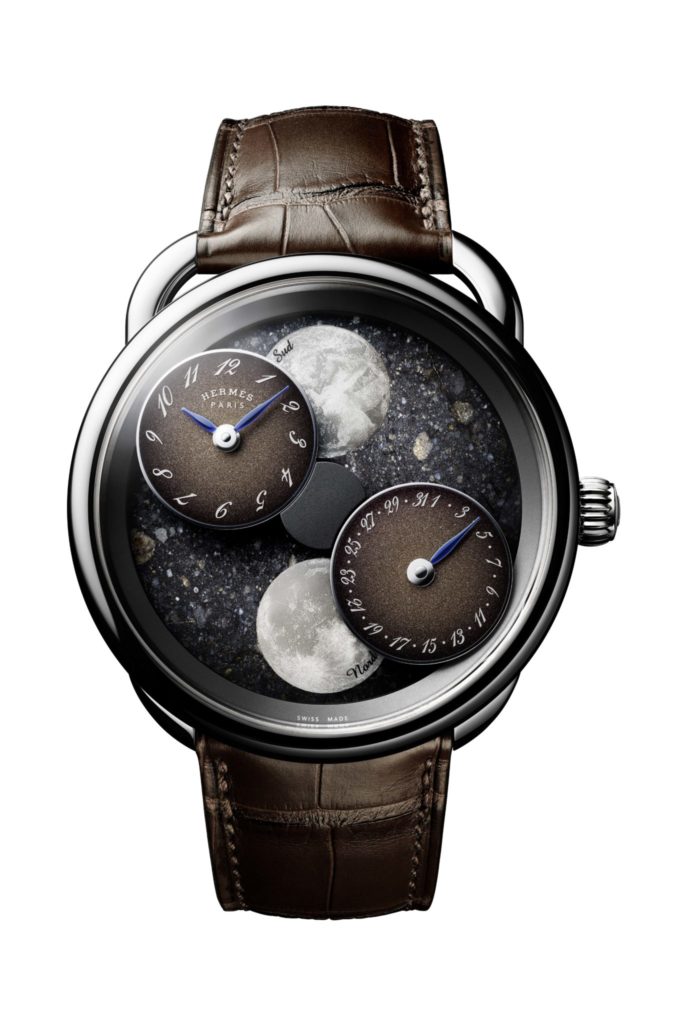 Interestingly, instead covering the entire surface of the dial, the double moon here eclipses a traditional aperture-type display. Hence, the result is a free-spirited and impertinent vision of mechanical watchmaking according to Hermès. Furthermore, aside to the hemispherical moons, the mobile counters displaying the time and date also turn weightlessly to reveal the moon discs, while maintaining their horizontal orientation. It’s worth noting that the Manufacture Hermès H1837 movement powering the watch is only 4.2mm thick, providing a unique challenge to the maison: to preserve the slenderness of the overall mobile chassis, which sweeps around the dial in 59 days. Framed by the Arceau case with its asymmetrical lugs, the timepiece is completed with a matt alligator strap in black, Havana or Veronese green, depending on the versions.

Overall, as an offbeat expression of a classic horological complication, space-time, metal, stars and rock seamlessly merge the watch exterior with the movement to form an unprecedented technical and aesthetic display of simple and graphic readability. In short, the Arceau L’heure de la lune successfully offers an original and exciting interpretation of Hermès’ watchmaking expertise.

Watches and Wonders Geneva 2021 Will Be A Digital Only Event

Louis Vuitton Tambour: How the Maison’s Most Emblematic Watch Has Evolved in the Last 18 years