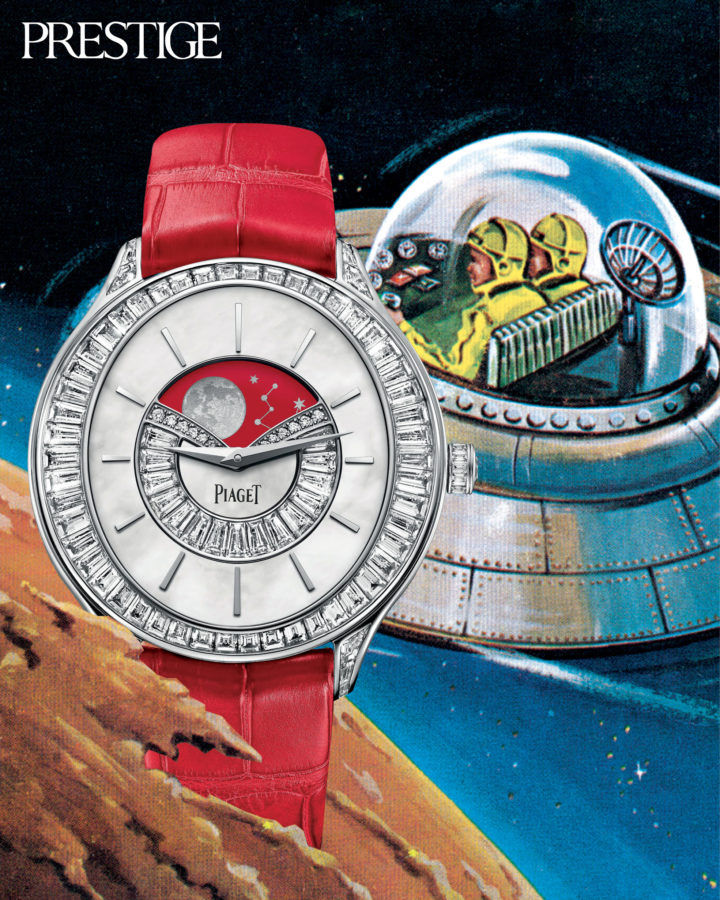 Highly coveted among aficionados, moonphase watches are a perfect marriage of art and science 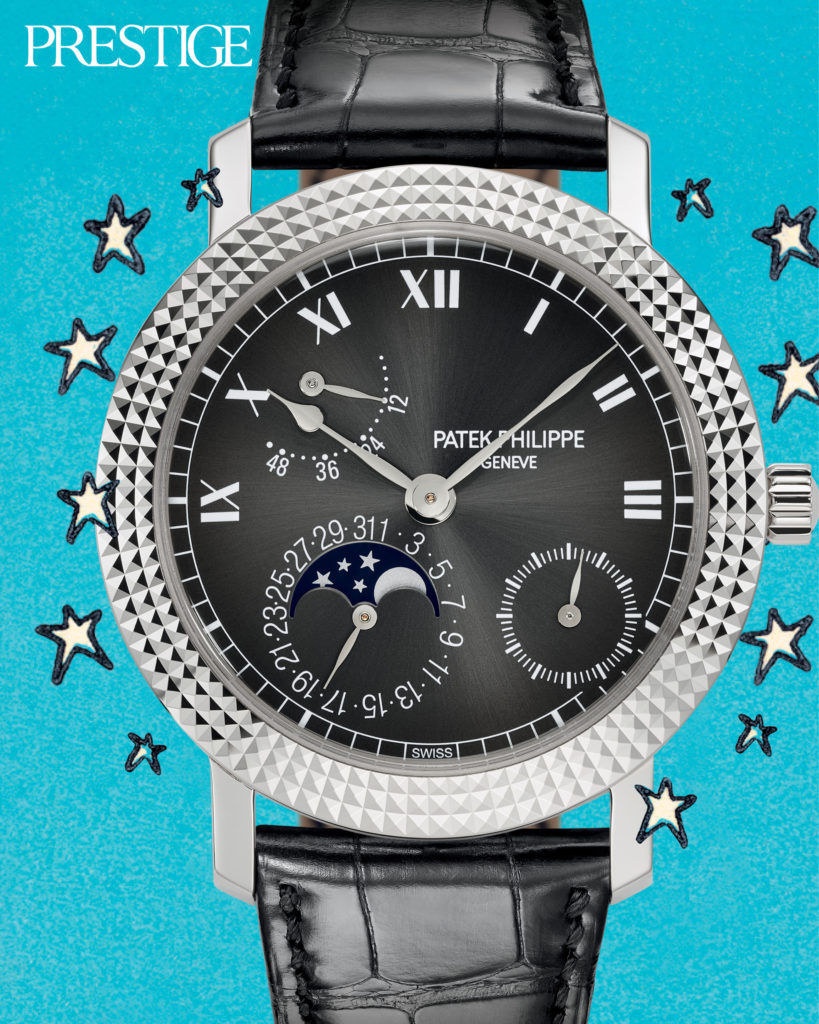 Limited to 100 pieces, this Patek Philippe Ref. 5057G-010 Calatrava is a special limited edition created to commemorate the 50th anniversary of Cortina Watch’s founding and its 50-year partnership with Patek Philippe in Southeast Asia. The 36.5mm model is a new edition of the Ref. 5057R-001 that was first created for the watch retailer’s silver anniversary in 1997. Featuring the same triple row guilloched Clous de Paris hobnail bezel as its predecessor, the new white gold reference is distinguished by an elegant charcoal grey sunburst dial with a black gradient rim, white transfer-printed Roman numerals and white gold pear-shaped hands. Powered by the Calibre 240 PS IRM C LU, the display indicates the date, moonphases and power reserve on two subdials, with a small seconds indication between 4 and 5 o’clock. The ultra-thin self-winding movement with a 48-hour power reserve can be viewed through a transparent sapphire caseback, which bears the commemorative inscription “Cortina Watch 50th Anniversary Since 1972” in white. 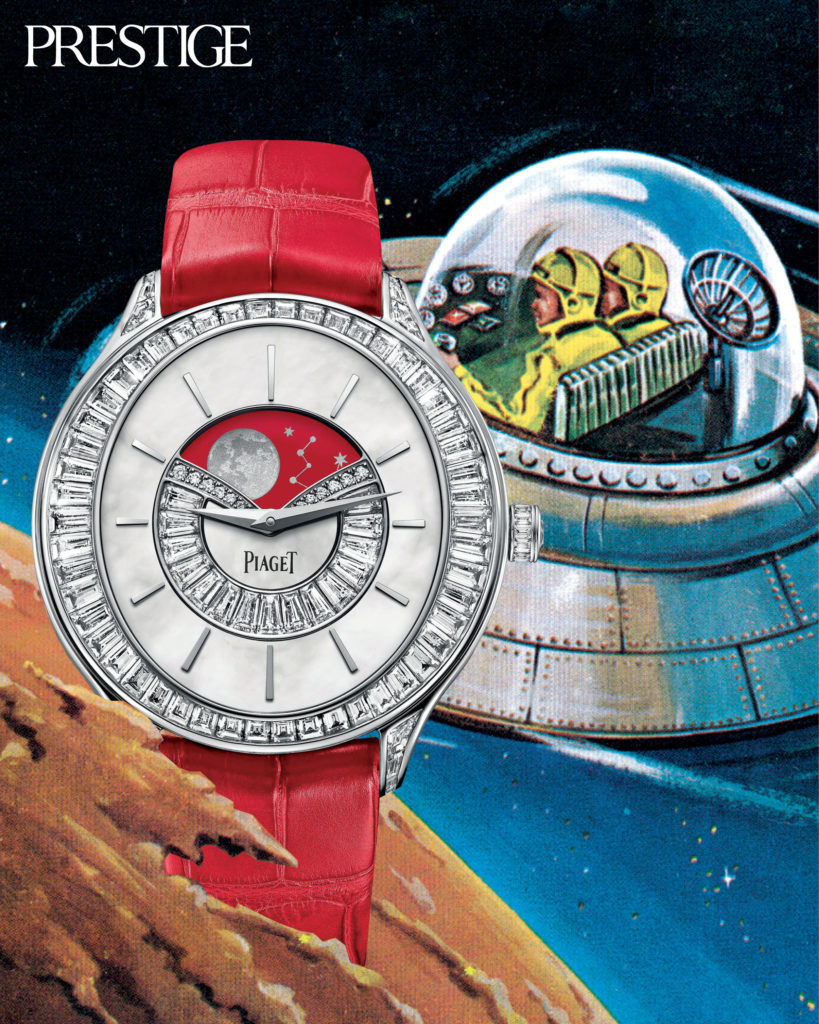 The Limelight Stella High Jewellery Watch is a stunning creation that beckons one to admire its seductive red moonphase indicator, which is framed by baguette diamonds and set against a white mother-of-pearl dial. The signature elegant lines of the Limelight Stella collection are showcased in an artful combination of two shapes on this white gold reference: a round 39mm case with an oval dial aperture opening, accentuated by 359 diamonds totalling 8.4 carats. Visible via an exhibition caseback is the manufacture 584P automatic mechanical movement, whose precise moonphase display only needs an adjustment every 122 years. 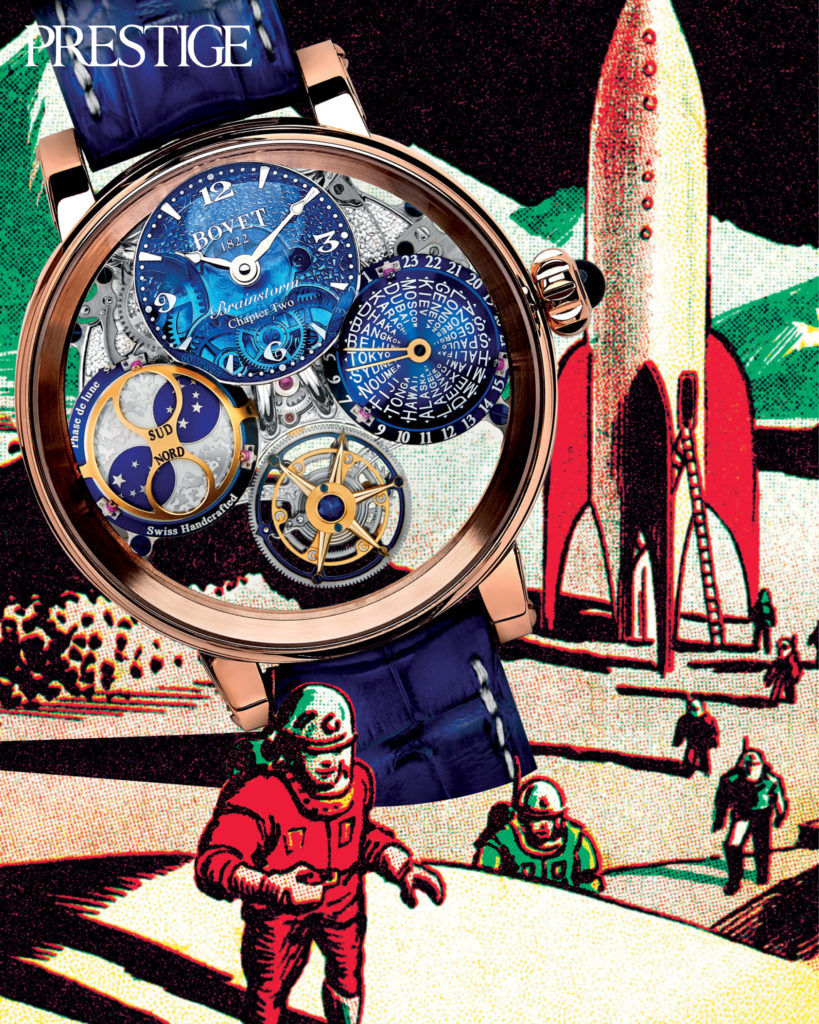 BOVET 1822
Winner of the Mechanical Exception prize at the Grand Prix d’Horlogerie de Genève 2020, the Récital 26 Brainstorm Chapter Two is now presented with its trademarked 47.8mm “writing slope” case in red gold with three dial versions in starry-sky aventurine, green quartz or blue quartz as pictured here. Flaunting Bovet’s patented double-sided flying tourbillon, a second time zone with a 24-city disc, precision moonphase displaying both hemispheres and five days of power reserve, this timepiece is a brilliant blend of high watchmaking savoir faire, decorative arts and innovation. Filled with Super-LumiNova, the hand-engraved lunar surface at 9 o’clock rotates in sync with the lunar cycles and requires only a one-day correction every 127 years. An openworked figure-eight structure highlights the portion of the moon that is visible in either hemisphere. Designed to highlight the exquisite movement, the slanted sapphire crystal allows its wearer to read all the indications clearly and quickly or admire the mechanical exception within. 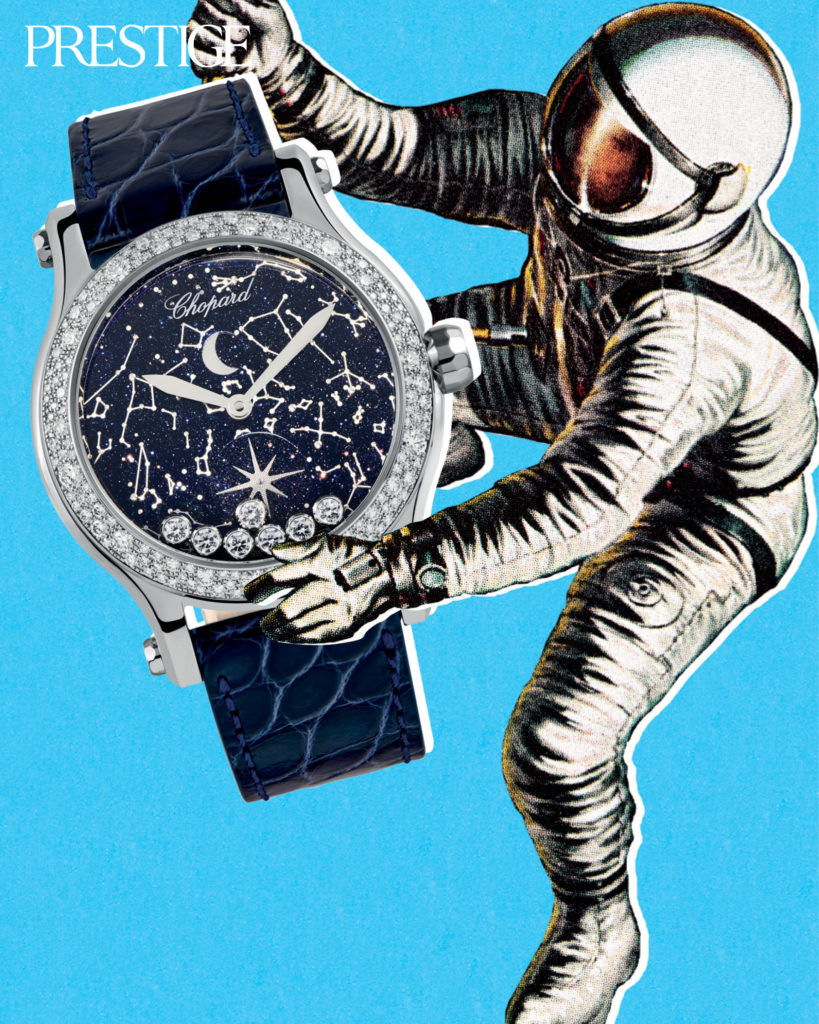 CHOPARD
To celebrate Cortina Watch’s 50th anniversary, the Swiss manufacture has created two commemorative models, including the Happy Moon Auto 36mm Golden Jubilee Edition range. Available in three dial variations of red mother-of-pearl, green aventurine and blue aventurine as pictured here, the timepieces all feature bezels with snow-set diamonds and are crafted in ethical rose gold, yellow gold and white gold respectively. Featuring seven “dancing” diamonds and a subtle moonphase display, this poetic creation is made even more enchanting with a depiction of the constellations of the northern sky with a compass-style small seconds display at 6 o’clock. Sold exclusively at Cortina Watch boutiques and limited to only five pieces for each dial variation, the watch has an exhibition caseback stamped with “Cortina Watch 50th Anniversary Since 1972”. 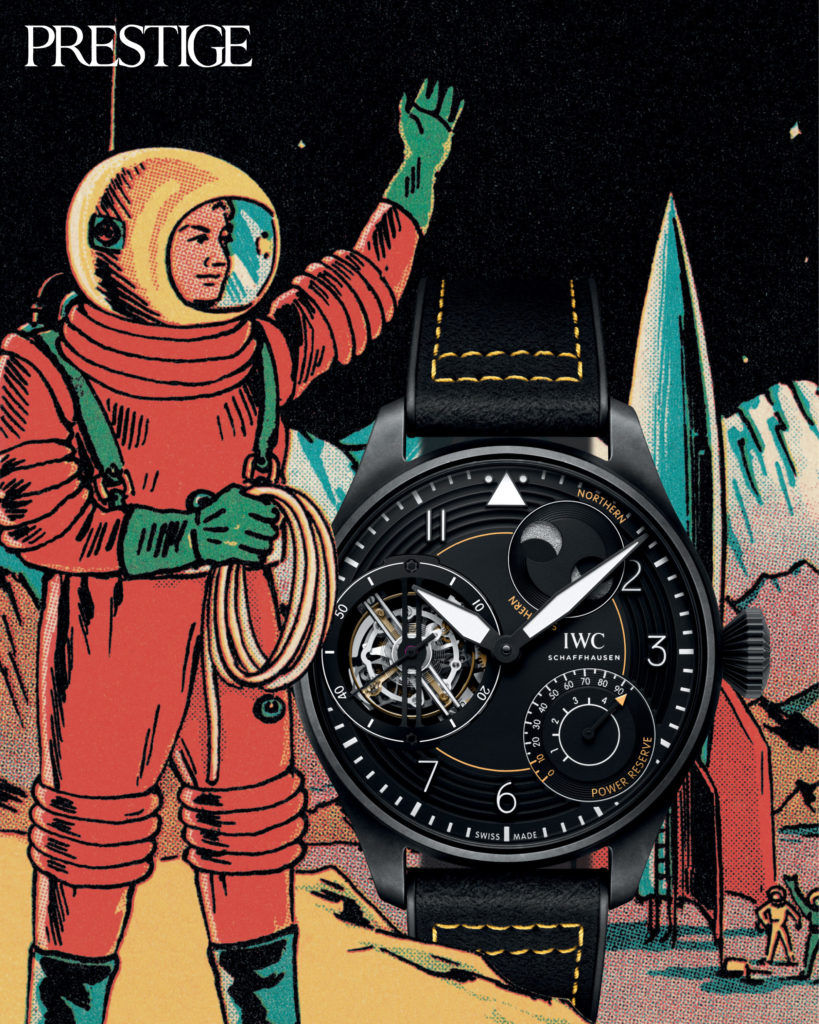 IWC SCHAFFHAUSEN
The Big Pilot’s Watch Constant-Force Tourbillon Edition “IWC Racing” boasts a design inspired by the technical world of motor sport. Limited to just 15 pieces, the commanding 46.2mm watch combines IWC’s complex constant-force tourbillon with a matte black Ceratanium case and the fully blacked-out 94800 calibre, which lend the model its unique and futuristic appearance. While the constant-force tourbillon at 9 o’clock is attention-grabbing, the dial also features a standout double moonphase display for the northern and southern hemispheres. White numerals and yellow accents recall a race car’s dashboard, while the power reserve display at 4 o’clock is reminiscent of a tachometer. The louvred, ring-shaped outer dial ring takes inspiration from the cold air intake system of a high-performance engine. Even the black rubber straps incorporate a detail from the racing world with an inlay of Alcantara – a durable, synthetic microfibre with superb grip often used for the seats and steering wheel covers of performance cars. 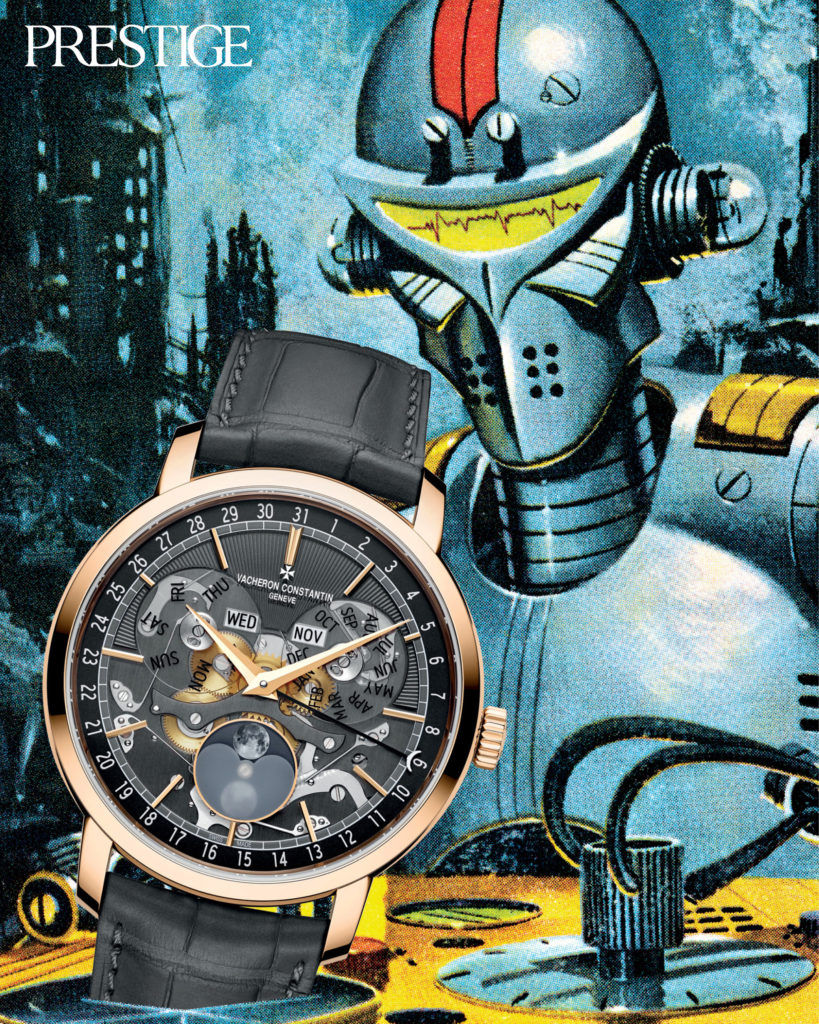 VACHERON CONSTANTIN
The Traditionnelle Complete Calendar Openface watch boasts a highly sophisticated style with an avant-garde edge in white or, as pictured here, pink gold.
Framed by a 41mm case, the watch’s transparency brings out the details of Calibre 2460 QCL/2, swathed in a contrasting anthracite grey tone achieved by NAC galvanic surface treatment. Encircled by a slate grey opaline flange on which a central hand points to the date, the dial features a slate grey guilloche segment on the upper half and applied gold hour markers. Days and months are indicated on clear sapphire discs highlighted via an aperture-type display. The moonphase disc – complete with two realistic transferred depictions of Earth’s satellite – is also covered by translucent sapphire. Equipped with a stop-seconds mechanism, the self-winding movement is endowed with a 40-hour power reserve. In addition to its triple calendar indications, the precision moonphase display requires one correction every 122 years. The caseback reveals a circular-grained mainplate, chamfered bridges and the Côtes de Genève motif. 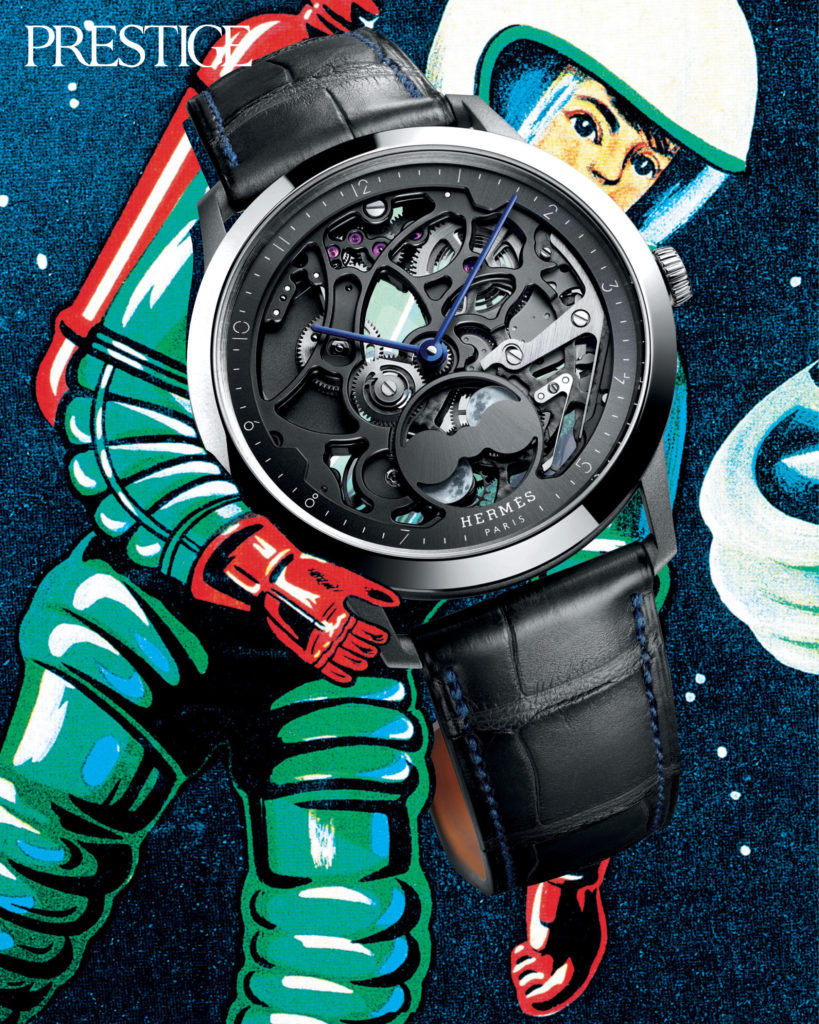 The Slim d’Hermès Squelette Lune is a play of paradoxes with elements that are classical yet contemporary, understated yet assertive. A deft juxtaposition of materials sees the bead-blasted titanium caseband topped by a precious platinum bezel and white gold crown to create subtle light and textural effects. Accentuated by an airy architecture and alternating matte and glossy finishes, the deep shades of the skeletonised dial express the ultra-chic character of this 39.5mm model. An openworked double moon completes the sleek aesthetic, while slender blue hands that match the stitching on the alligator leather strap add an unexpected contrast. The hours, minutes and moonphases beat to the rhythm of the ultra-thin self-winding Hermès H1953 manufacture movement, adorned with the “sprinkling of H’s” motif.