Over the Moon: Omega and Swatch Drop the MoonSwatch Collection 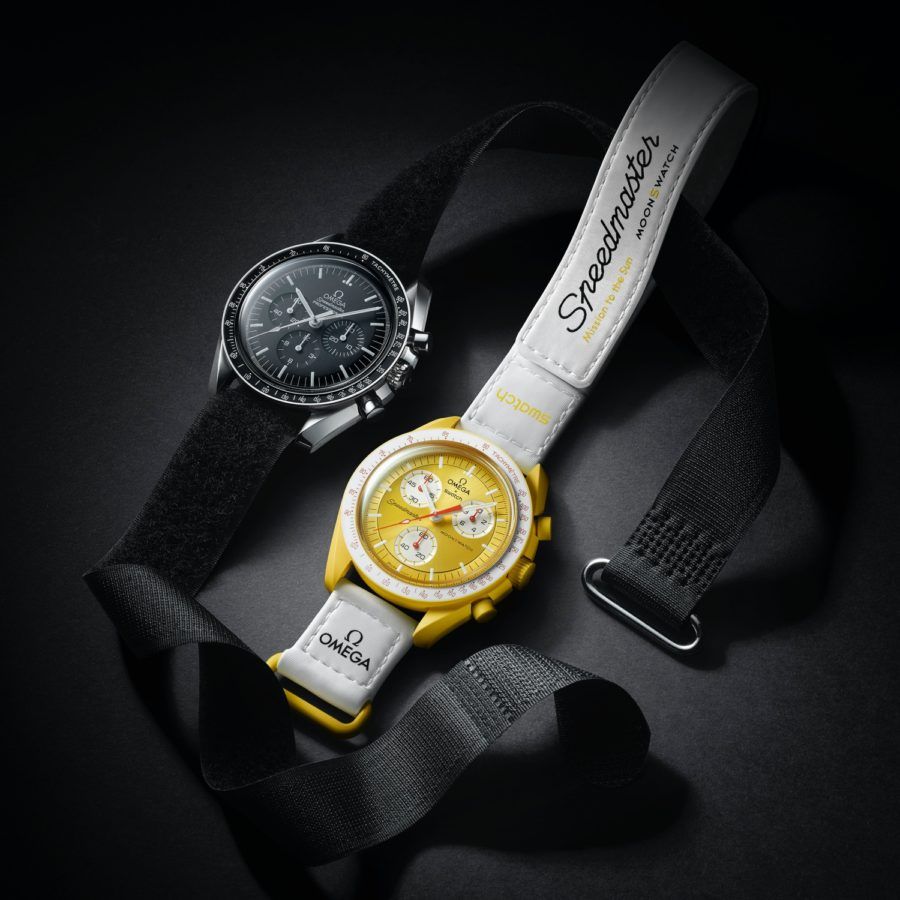 Style
Over the Moon: Omega and Swatch Drop the MoonSwatch Collection
Share
Next article

Omega and Swatch have a joint mission: how to make fun watches again? The answer lay in the two Swiss watch brands’ first-ever collaboration, which resulted in a playful take on Omega’s iconic Speedmaster chronograph at a price point that has everyone going a bit gaga.

The two brands just dropped the MoonSwatch – marrying the best of both worlds in a singular creation. It is essentially the Omega Speedmaster Moonwatch, injected with a whole lot of Swatchness in a whimsical, colourful and accessible way. Drawing inspiration from space – where else? – the collection includes 11 Swatches named after planetary bodies, from the sun at the centre of the solar system to the dwarf planet at its periphery.

Instead of a mechanical movement, these are quartz watches. And instead of the stainless-steel case, the MoonSwatch comes in a Bioceramic case, which according to Omega and Swatch, is a unique mix of two-thirds ceramic and one-third material derived from castor oil.

The dial is co-signed by both brands, with Omega x Swatch at the 12 o’clock position, and both the lettering Speedmaster and MoonSwatch in between the subdials. The watch isn’t an exact copy of the beloved Speedmaster, although it carries certain elements true to the Moonwatch that collectors would love, including the same case contours, the distinctive subdials and the tachymeter scale with the dot over 90. A subtle “S” is etched into the crystal where the Omega logo typically would be found on the hesalite Moonwatch.

Each of the 11 MoonSwatch features its own mission statement, corresponding to the 11 planetary objects in our solar system. There are bright funky colourways including mint green and blue (Earth), cream and pink (Venus), and varying shades of blue (Neptune). There are also more conservative versions, like the Mission to Moon, which comes closest to the original Moonwatch, as well as variations that make reference to other iconic Speedmaster models such as Mission to Mars, in red and white with red rocket hands that pay tribute to Omega’s Speedmaster Alaska Project watches.

On the back, the watch features a depiction of its planet. A Velcro watch strap (as used by astronauts to keep their watches over their spacesuits while on a mission) is included in the box set. The watch retails for just HK$2,100, making it the most accessible “Speedmaster” yet.

In a statement, Omega President Raynald Aeschlimann proudly says, “Omega’s long and distinguished history may have been cut short if it wasn’t for the vision and the courage taken by Swatch. The MoonSwatch collection salutes the saviours of our industry in a witty and accessible way. The Swatches are perfect for budding Moonwatch fans and I can’t think of a more appropriate icon for our shared project. We went to the moon, now we’re exploring the whole Milky Way. They’re great watches, in fantastic colours and they make me smile.”

Houston, we might just have a slight problem. With limited availability, each customer is only allowed to pick two different variations of the MoonSwatch. And we’re having trouble deciding on which one.

Update: Due to skyhigh demands, the MoonSwatch is currently out of stock in Hong Kong and Macau but Swatch promises to restock in the coming weeks, with the watch becoming available online eventually. The MoonSwatch is not a limited edition.