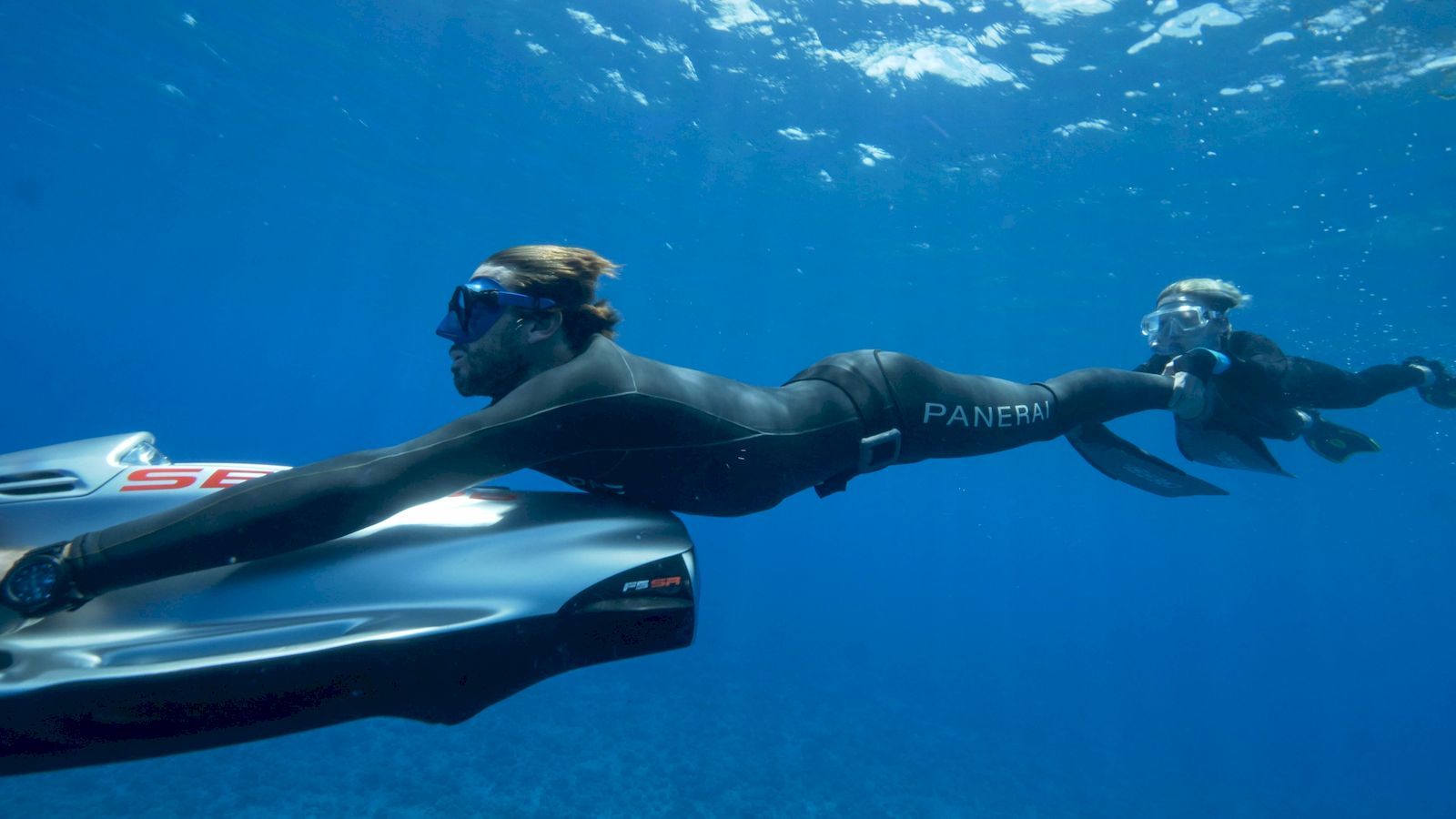 Somewhere in the South Pacific Ocean, beyond the reef, sun rays pierce through the deep waters of a particular shark safari spot. All around, dozens of grim-faced, beady-eyed reef sharks and large schools of variants — the likes of trigger, butterfly, and angel fish — are casually going about their day. They’re well accustomed to curious two-legged land creatures dropping in on a daily basis, faces distorted into snorkel gear, and ogling their world.

But today’s group isn’t just any bunch of pale-skinned tourists checking off a bucket-list must-do (“swim with sharks”) in exotic Bora Bora. Clad in shortie wetsuits emblazoned with “Panerai”, these 30 or so bodies are part of a multinational group of watch collectors, Panerai staff, journalists, and influencers that have been brought together by the brands historical link with the sea.

And the intrepid leader of this group is freediving champion and Panerai ambassador Guillaume Néry, who is swimming alongside lemon sharks that lurk closer to the seabed. He glides nonchalantly on his back, blowing up air bubble rings, and speeds through the depths with dolphin kicks, his long fins flexing behind him like a guppy’s tail. And he stays underwater  for minutes at a time, without any scuba gear, on a single breath.

The sharks and other sea creatures might recognise this merman, since he and his young family have made the neighbouring island of Mo’orea home last August, but it’s the first time in French Polynesia for all the rest of us – and our first encounter with Néry in his element.

“Bora Bora is mythically beautiful – just bringing us here alone was more than half the job done,” says Peter Chong, a Hong Kong-based watch collector. He is one of 15 owners of the Submersible Chrono Guillaume Néry Limited Edition watch, which was his ticket to Bora Bora.

Just a fortnight ago, he and two other watch owners here in Bora Bora were also part of a small contingent of civilians undergoing a two-day bootcamp in Italy with the elite Comsubin commando frogmen of the Italian Navy. That was Panerai’s first experience trip for the owners of the 33-piece limited edition Submersible Marina Militare Carbotech. Chong is also looking forward to joining explorer and conservationist Mike Horn, a long-time Panerai ambassador, on a gruelling training expedition among Arctic ice floes come March 2020, having purchased a 19-piece Submersible Mike Horn Edition.

The concept of these “Xperience Edition” watches stems from Panerai’s Laboratorio di Idee (Laboratory of Ideas), with adventure and the marine world and its conservation tying back to the brand’s long heritage in military-grade timepieces.

Panerai CEO Jean-Marc Pontroué says that only the very top customers in the brand’s top markets were offered the three experience watches last year. “We sold everything in two days – our collectors knew that it’s extremely limited, and the experience concept is very valid with our positioning. Panerai stands for innovation and the experiences are part of this journey in the world of innovation.”

In pursuit of adventure

Our first day starts with 7am yoga on the beach. Tall and lanky, with tousled curls, Néry, while not a yoga instructor, is a riveting teacher. He uses stretching and sun salutations to open up the chest every morning, and shares that the breathing techniques help him stay calm before a big dive. After leading us through an hour of stretches and breath control exercises, he succeeds in helping us learn to hold our breath for two whole minutes.

Nonetheless, he reminds us: “The idea of this experience is not just to go in the water and try to hold your breath, but to interact with wildlife: Whales, sharks, rays. Those animals are in their home, and they can feel everything – they can feel your emotions, the way you are in the water. So, the more relaxed you are, the stronger the connection can be.”

We’re certainly hoping to connect with whales today. A few of us are on a 21ft semi-rigid catamaran with Néry and Pontroué, a smaller fast craft that leads a three-boat expedition to spot us some humpbacks, which migrate up from Antarctica to breed from mid-August to end October. We are on the trail a mother and calf for a seeming eternity, hoping that they would stop to rest or play so we can swim right up to the friendly, curious creatures. But apparently there’s a male humpback in pursuit that wants to mate, and the uninterested female keeps on going.

Néry eventually calls off the quest. “That’s nature,” he says. “You can never guarantee what you’ll see.” Our next stop outside the reef swimming with sharks – and watch Néry dive into action – is ample consolation.

Friends from the deep

The next morning’s agenda entails a visit to a coral garden and swimming with sharks and stingrays. We make an unexpected stop along the way. There’s a manta ray in the water, our boatman alerts us excitedly. Néry is in the water in a flash and descends to the bottom, swimming alongside the majestic, gentle creature which measures about 3m wide. The rest of us trail them from the surface. The manta ray flits away, then circles round to indulge us with an encore before drifting off into the murky depths.

Néry later tells us: “To see a manta ray in a lagoon is very, very special. I don’t know if you have ever seen an animal so big, moving with that grace – like it’s flying in the water. Even though I’ve travelled the world and seen many animals, it was still very special, and I am very happy that you had the opportunity today to meet that special animal.”

We get to put our newly acquired breath control techniques into practice with our master freediver, gripping his ankles as he manoeuvres an underwater scooter towards the ocean bed. I manage a descent of probably no more than 3 to 4m and 10 seconds, and am already struggle with holding my breath under the increasing water pressure – it certainly gives me a greater appreciation for the endurance needed in Néry’s sport.

Later, we’re standing waist-deep in water in a lagoon teeming with hundreds of blacktip reef sharks, and experience dozens stingrays swooshing in to eat raw fish from our boatman’s hand and suck up any parts that fall to the seabed. These puppies of the sea happily slither around our legs and bodies hoping to be fed, letting us pet and stroke their smooth bodies. Tour boat operators regularly remove the barbs from the stingrays’ tails (it supposedly doesn’t hurt them), so we needn’t fear getting stung.

Our day ends with a boat ride to Motu Tapu island to catch the glorious, painterly sunset, followed by a BBQ dinner and energetic Polynesian dance performances. It’s our final night in Bora Bora, and the friendships formed during the two-day experience (plus three to four days of flights and stopovers) are evident from the laughter and conversations that stretch into the night.

Néry was not here to prove he was a big fish either, or compel us to achieve a measure of his freediving ability, but had been a quiet, thoughtful star of show who lit up when sharing about his favourite dive spots and the importance of not just ocean but overall environmental conservation. He and Panerai aimed to let us “live an experience”, and they achieved it with resounding success. Pontroué promises another eight experiences in 2020 – four specific to local customers in China, India, Italy and the UK; and four international.

The experience also reinforced Néry’s personal alignment with the brand: “I’m someone with passion for my sport, and the customers have a passion for the brand. You see it in their eyes, from the way they talk about watches and the industry. Panerai really has something that creates passion. It’s a very special brand and people are really fans of the brand. I understand this better now.”