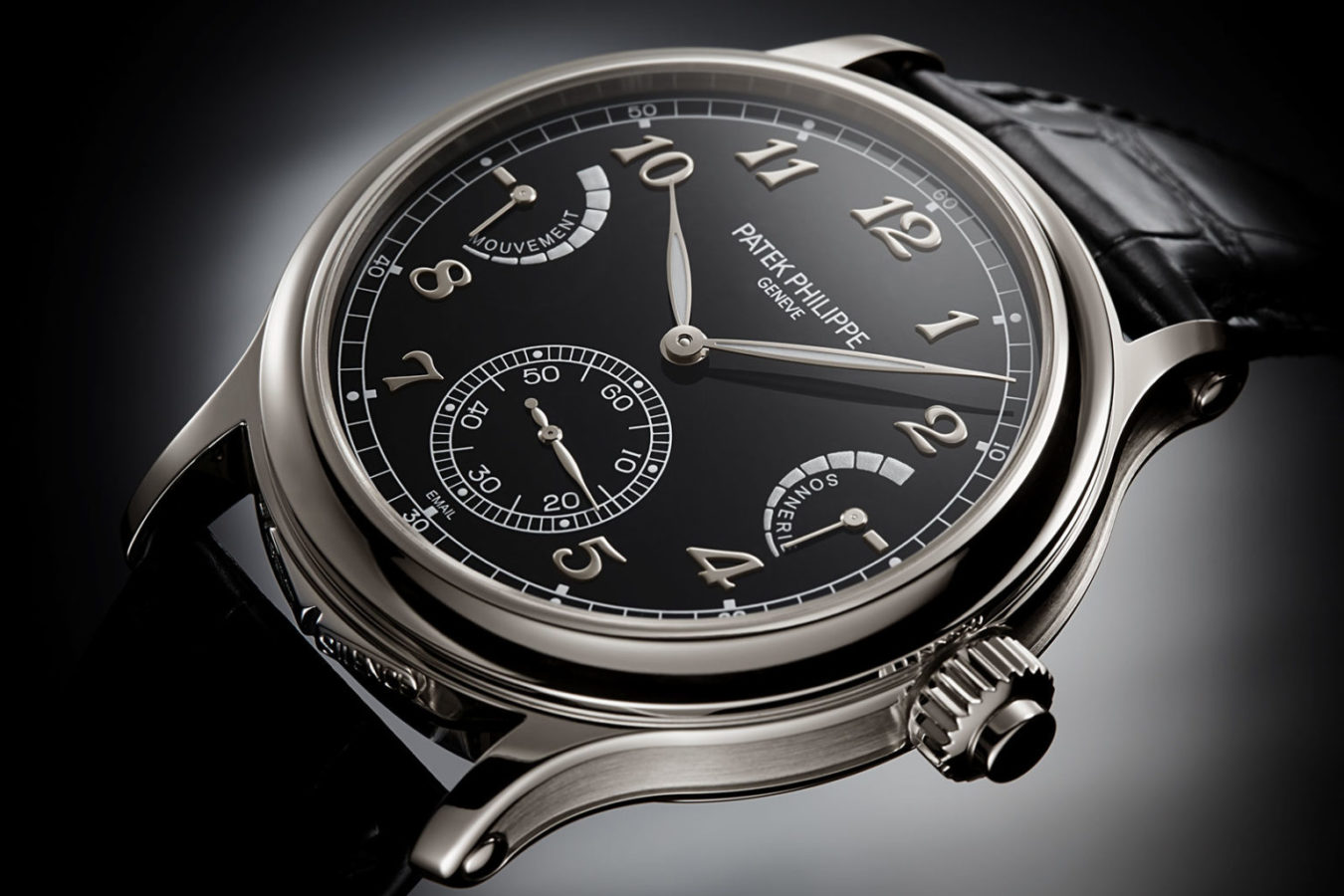 The Genevan manufacture introduces its first wristwatch with a grande sonnerie in its purest manifestation, complemented with a petite sonnerie and a minute repeater.

Patek Philippe has just released a wristwatch that features a highly coveted and extremely elaborate sound function, the grande sonnerie, which automatically strikes the full hours and the quarter hours. Named the Ref. 6301P Grande Sonnerie, this grand complication—which is exceptionally rare in a wristwatch—is complemented with a petite sonnerie (that does not strike the quarter hours), a minute repeater (that strikes on demand), and also a patented jumping subsidiary seconds. 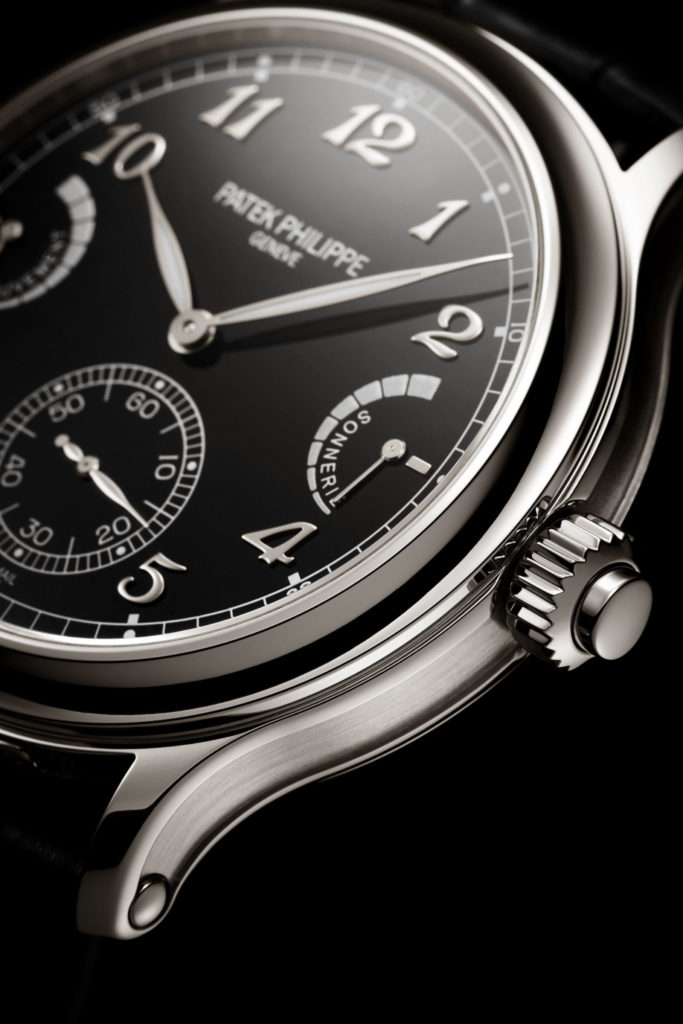 At first glance, we can see up front that the displays for the hours, minutes, and subsidiary seconds at 6 o’clock are well proportioned alongside two power-reserve indicators for the movement and the strike work at 3 and 9 o’clock. 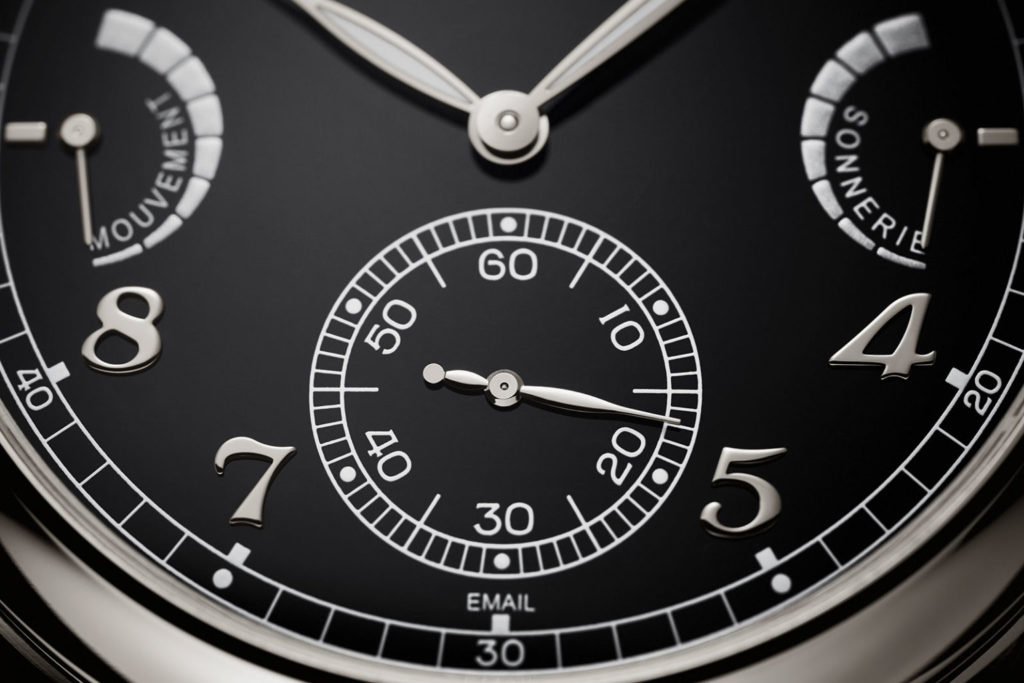 Furthermore, the Grand Feu black enamel dial with semicircular scales identified with the inscriptions “Mouvement” and “Sonnerie,” alongside with Breguet numerals, and leaf-shaped hands in white-gold with luminescent coating, add further distinctive visual flairs to the wristwatch. 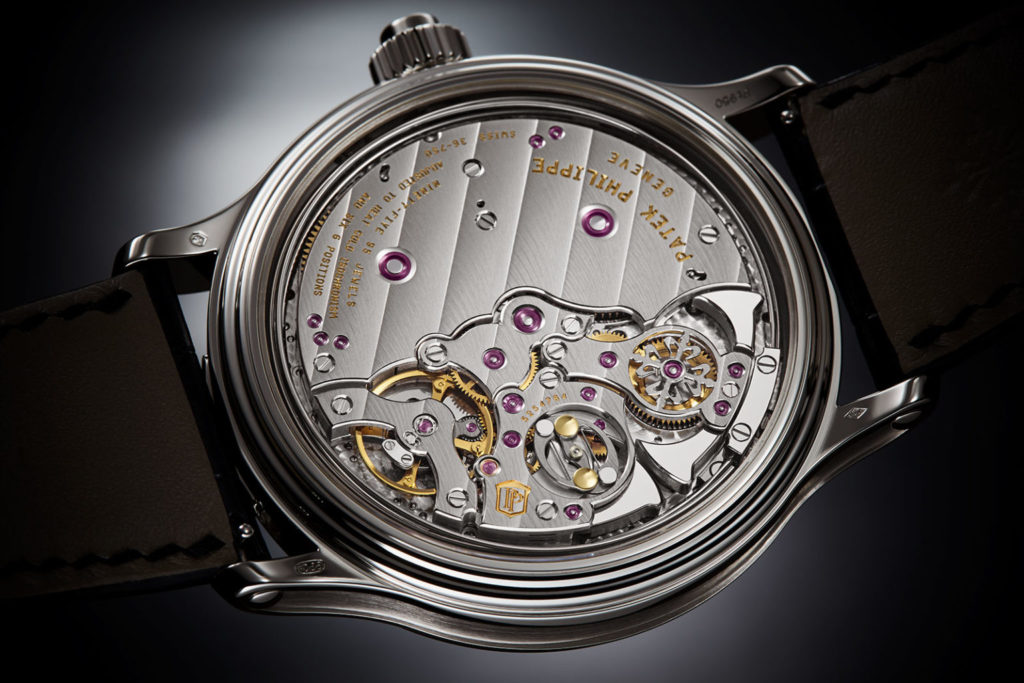 Beneath the dial, this sublime creation is driven by the caliber GS36-750 PS IRM, which is remarkably compact for such a complex mechanism given its 703 parts. Of particular note, this newly-developed movement—in order to implement the grande sonnerie as envisioned—is a spin-off from the caliber 300 of Patek Philippe’s Ref. 6300 Grandmaster Chime. 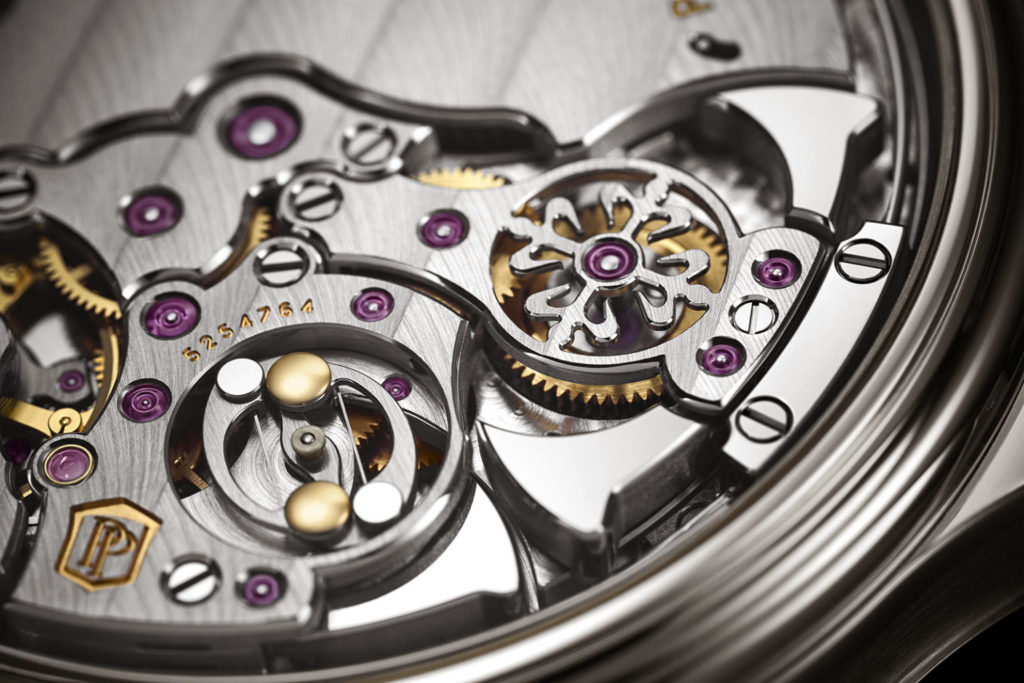 It features three classic gongs and two patents for the striking mechanism and the jumping small seconds at 6 o’clock. Aside to that, it is also endowed with two series-connected twin mainspring barrels that assure a power reserve of 24 hours for the strikework and 72 hours for the movement. Speaking of which, mastering energy flows and power reserves is one of the traditionally greatest difficulties for the engineers of grande sonneries. Why? Because the grande sonnerie needs to have sufficient reserve power to automatically sound the required number of time strikes with uniform acoustic quality, unlike in minute repeaters, which must be triggered on demand by actuating a slide or a pusher. 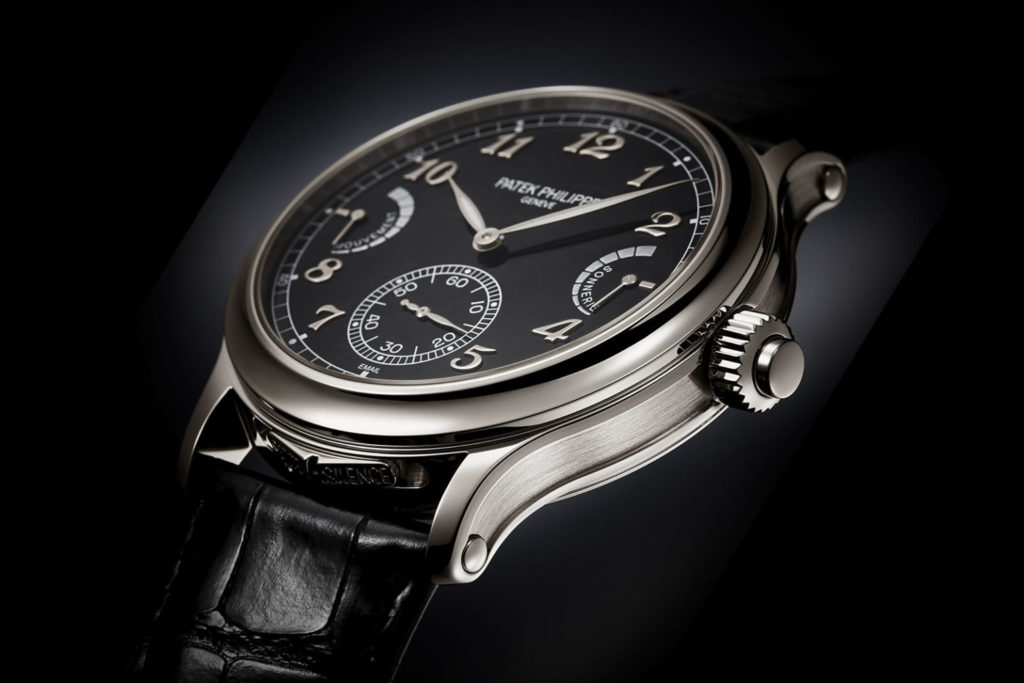 It doesn’t end there, however, as the Petite Sonnerie, Grande Sonnerie and Silence operating modes can be selected with the slide switch at 6 o’clock. The minute repeater can also be activated on request with the pusher in the winding crown. Regarding the strikework, Patek Philippe opted for three classic gongs—low, medium, high—in the legendary “Patek Philippe sound” so coveted by connoisseurs.

Amazingly, thanks to the energy stored in the aforementioned twin mainspring barrel of the strikework, this adds up to an impressive total of 1056 strikes in 24 hours. However, the wearer can also select the Petite Sonnerie strikework mode; it strikes the full hours but omits the repetition of the hours when striking the quarter hours. Meanwhile, in Silence mode, the automatic time strike is switched off altogether. 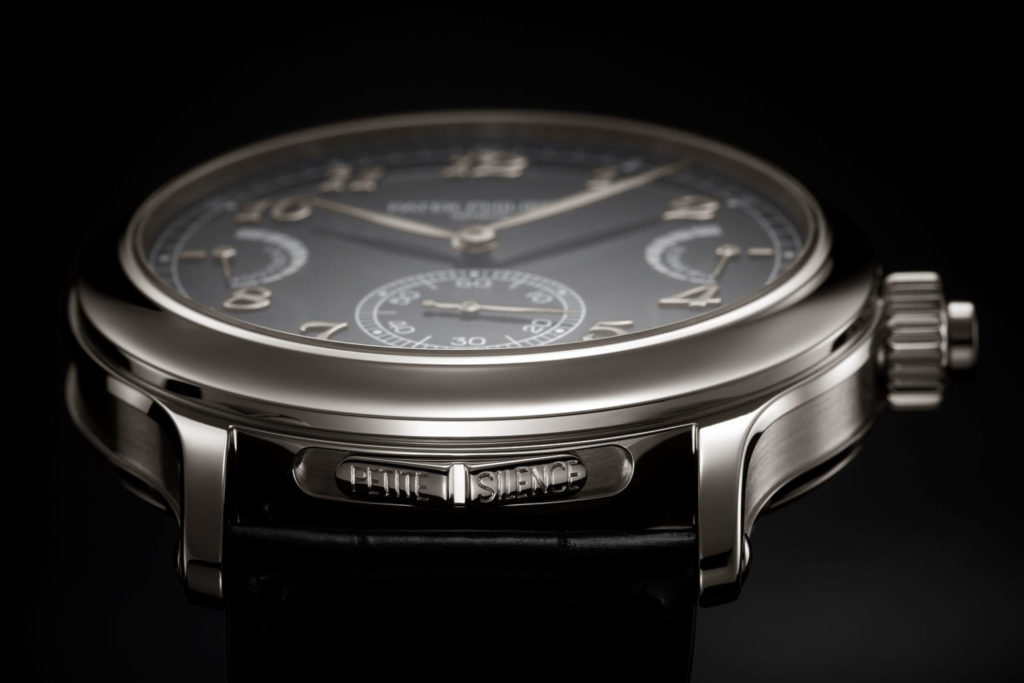 In addition, the strikework mechanism and the refined architecture of the movement can be admired through the sapphire crystal case-back. Long awaited by connoisseurs and collectors, this new Grand Complication is worn on a shiny black, hand-stitched alligator leather strap with square scales. 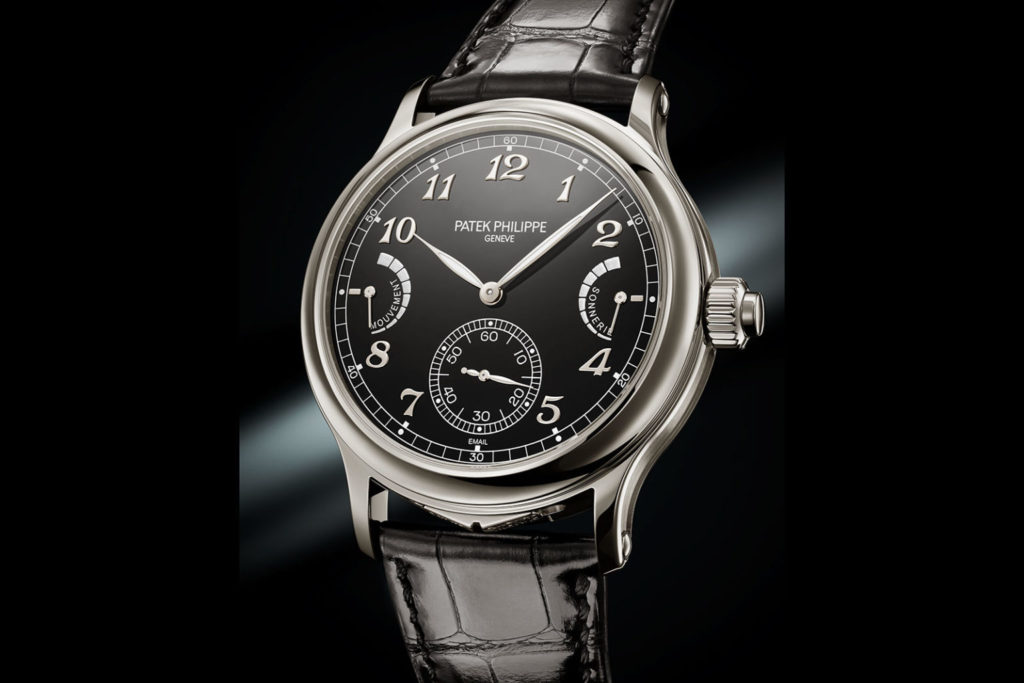 All in all, with a wristwatch that combines a grande sonnerie—which is rated as the pinnacle of time striking—with a petite sonnerie and also a minute repeater, Patek Philippe definitely reasserts its sovereign mastery of the music of time and enriches its current collection.

Style
By Riga Ramadhan
Sign up to get the latest luxury and lifestyle news delivered to your inbox.
Riga Ramadhan