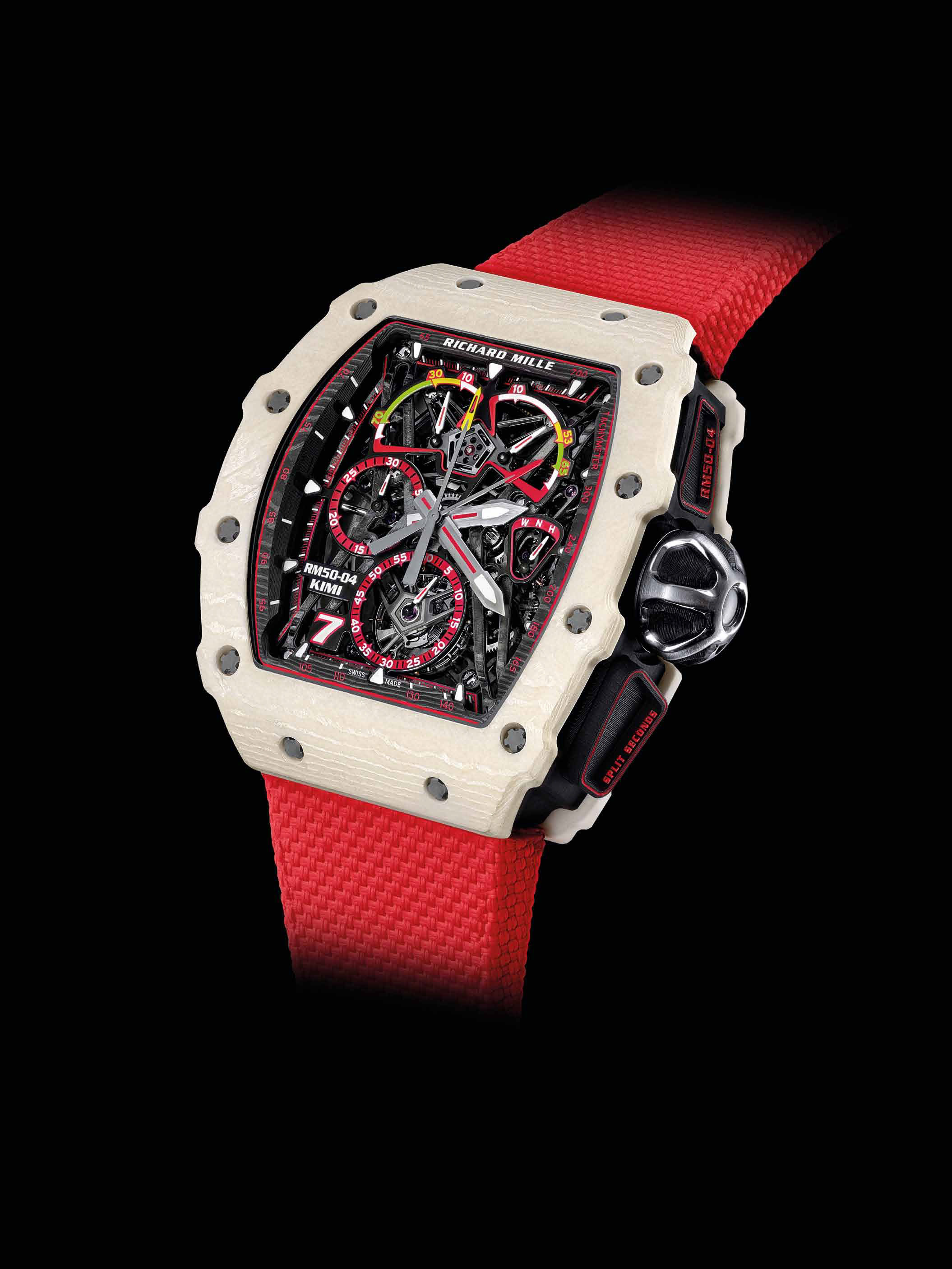 Back in 2018, Richard Mille partnered up with the Alfa Romeo Racing Team. So, it was only natural that the storied watch manufacturer also started working closely with the team’s legendary driver, Kimi Räikkönen. And to celebrate the partnership and the indomitable spirit shared by the brand, the driver and his team, Richard Mille introduces the RM 50-04 Tourbillon Split-Seconds Chronograph Kimi Räikkönen.

Finnish racer Kimi Räikkönen is a legend in his own right. He was crowned the 2007 Formula One World Championship after winning second place overall in 2003 and 2005. As a testament to his exceptional longevity in the sport, he has clocked in 308 starts throughout his career and made 103 podium finishes—21 times in first place.

Today, his style has become much more focused on the pleasure of driving. “From now on, I consider F1 to be a hobby,” Kimi, who was appointed as Finland’s Sports Ambassador in 2017, confided. “I no longer feel the same pressure and I can just have fun at the wheel. That’s what I enjoy doing, even if I’m still concentrated on doing my best to achieve the result that the car deserves.” That being said, his reflexed, finesse and—most importantly—his legendary reserved disposition that has allowed him to stay cool under pressure remains unchanged. No wonder, then, that he has been nicknamed “Iceman.”

The aforementioned RM 50-04 Tourbillon Split- Seconds Chronograph Kimi Räikkönen is— unsurprisingly—quite befitting of its namesake driver and what is arguably the most technologically-advanced motorsport. For starters, the watch features a split-seconds chronograph tourbillon powered by a movement made using grade-5 titanium and Carbon TPT® which weighs a mere 7 grams. To have a tourbillon and chronograph within a single mechanism requires perfect energy transmission—a quality that both automotive enthusiasts and connoisseurs of fine watchmaking can certainly appreciate. Paired with the unprecedentedly fine skeletonization of the movement puts the RM 50-04 in a class of its own.

Design-wise, the watch bears quite a few references to the Alfa Romeo C38 racing car driven by Kimi Räikkönen. The colours of the car, for one, are showcased on the bezel and case back in white Quartz TPT®. This is achieved by interlaying 600 layers of silicon, each only 45 microns thick (roughly half the width of a human hair). The resulting material boasts a high resistance-to- weight ratio, is non-allergenic and excellent protection against UV rays. Touches of red, meanwhile, are present within the movement, particularly on the flange, the chronograph counters as well as on the indicators for power reserve, torque and function. As a final nod to the driver lending his name to the watch, the number 7—the number worn by Kimi in competition—is emphasized on the grade-5 titanium dial.

The culmination of these design elements— from the choice of materials to the construction of the movement—gives the RM 50-04 exceptional resistance and robustness. To that end, Richard Mille has conducted inhouse testing where the watch is subjected to impacts of 5,000Gs. It goes without saying that the RM 50-04 passed these tests with flying colours, which is only fitting for a watch by Richard Mille that pays homage to one of the most technical drivers in one of the most technical sports.

The RM 50-04 Tourbillon Split-Seconds Chronograph Kimi Räikkönen is introduced as a limited edition of only 30 pieces. Of course, it will also accompany the driver which has given it its name on all of his major grand prix appearances. “We in Finland are known for our guts and determination. We even have a word for it—sisu. We have it in our stomachs. It’s what gets us past the finishing line, despite the odds,” Kimi explained. Then he added: “In my sport, however, sisu is not enough. I have to rely on high- performance technology and team-work—the kind I’ve come to appreciate since joining the Alfa Romeo Racing Team. Most of all, though, there has to be sheer passion! Richard Mille has powered his own engine for years with all three of these: guts, technological prowess and, above all, fun. That’s why I am more than happy to be at the wheel with the ground-breaking RM 50-04 on my wrist.”