SOME OF HUMANITY’S greatest achievements throughout history – especially in the 20th century – are feats of exploration. From conquering the limits of human endurance and reaching the highest mountain peaks to braving the most hostile environments on Earth and making it across the polar ice caps, nothing symbolizes the human spirit quite like going to the furthest reaches of our planet to expand our understanding of our home.

And in some of the most challenging of such adventures, Rolex has provided explorers with a reliable way of telling the time – a critical factor in ensuring survival and the completion of difficult journeys. On the other hand, these expeditions also provided unique opportunities for Rolex to test and improve the reliability and robustness of its watches, using the world as a living laboratory.

The Call of the Peaks 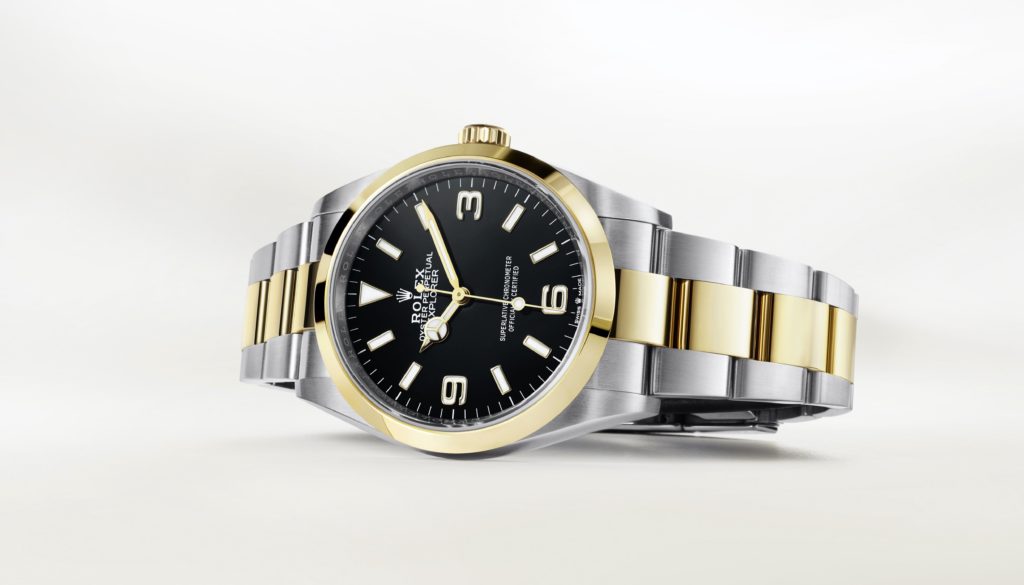 The newest iteration of the Rolex Oyster Perpetual Explorer presents a dashing combination of elegance and strength as a tribute to the mountaineers and explorers who have helped shape the 20th century. First and foremost, this latest Explorer comes in a 36 mm case, which pays tribute to the original model released back in 1953. It is a subtle nod to an era of wonder, where many corners of the world – including its highest peaks – were yet to be conquered.

Another notable aspect of the new Explorer is that it comes in yellow Rolesor. A signature feature of Rolex since 1933, Rolesor combines 18 ct gold and Oystersteel. The former offers a prestigious lustre which underlies the inherent stability of the precious metal, while the latter provides unbeatable strength and reliability. To be exact, on the yellow Rolesor version of the new generation Explorer, the bezel, winding crown and centre links of the bracelet are in 18 ct yellow gold, while the case and outer links of the bracelet are in Oystersteel. 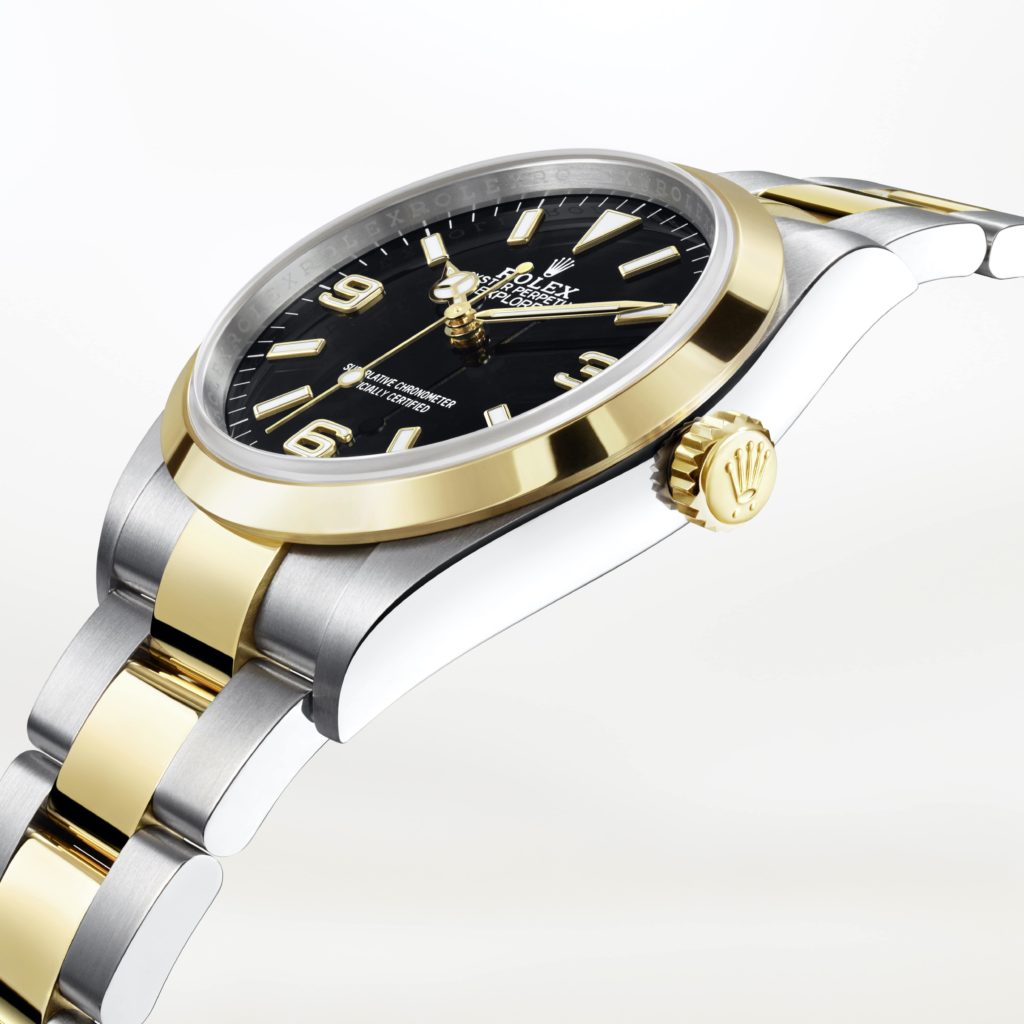 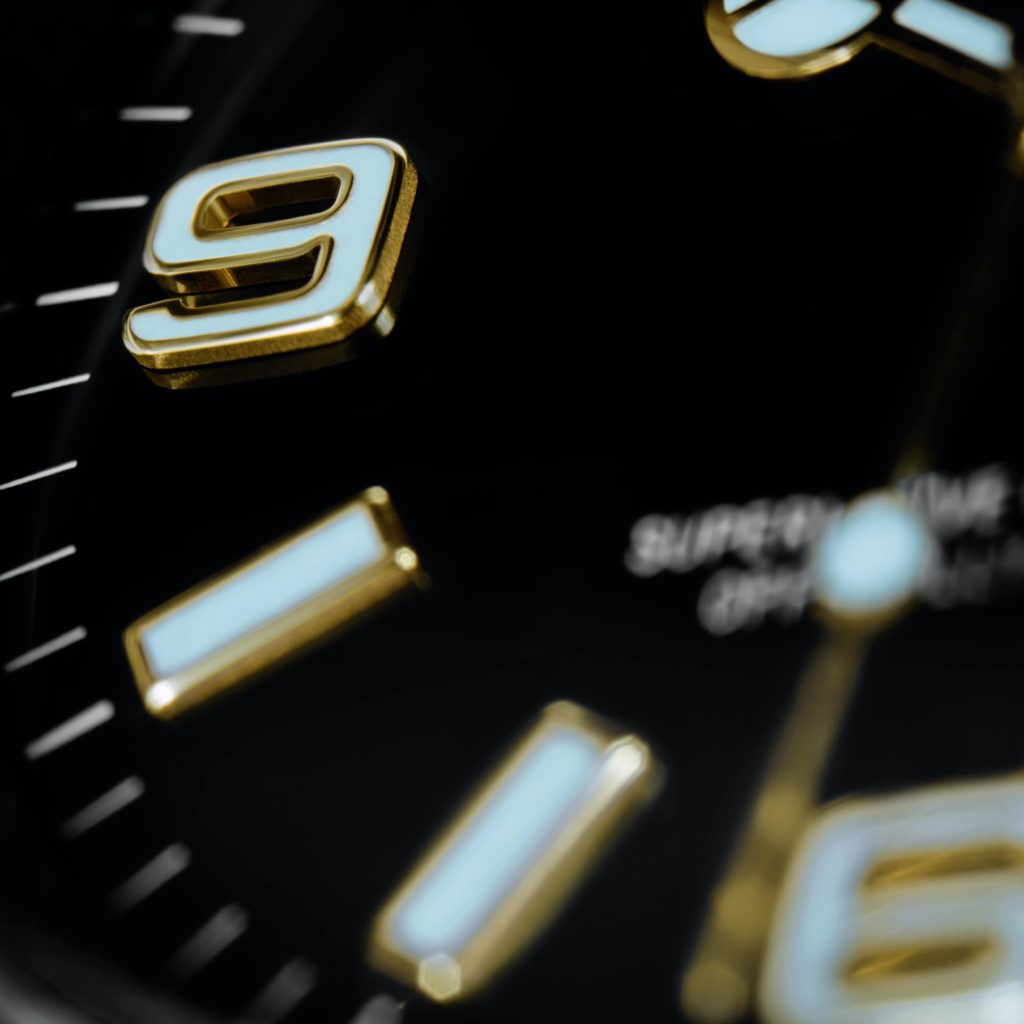 Moving inwards, we come to the Explorer’s black lacquered dial, on which the index hour markers and emblematic 3, 6 and 9 numerals stand out. The optimised Chromalight display is also worth looking into. The intensity of the blue glow in dark conditions is particularly impressive and lasts longer, thanks to the use of innovative and exclusive luminescent material. No less impressive is the white hue that comes out in daylight, which is now markedly brighter to ensure perfect legibility even under harsh sunlight.

The beating heart of the new generation Explorer is the calibre 3230, a movement at the forefront of watchmaking technology. This particular self-winding mechanical movement offers outstanding performance and its development led to the filing of several patents. One of these is the Chronergy escapement, which combines high energy efficiency with great dependability along with resistance to magnetic fields. Then there’s the optimized blue Parachrom hairspring, manufactured by Rolex in a paramagnetic alloy that makes it up to 10 times more precise than a traditional hairspring in case of shocks – definitely an expedient feature for explorers.

Last but not least, the new Explorer is secured to the wrist of today’s adventurers with an Oyster bracelet, which is known for its robustness. An Oysterlock folding safety clasp prevents accidental opening and an Easylink comfort extension link allows the wearer to easily adjust the bracelet length by approximately 5 mm, for optimum comfort across the day. 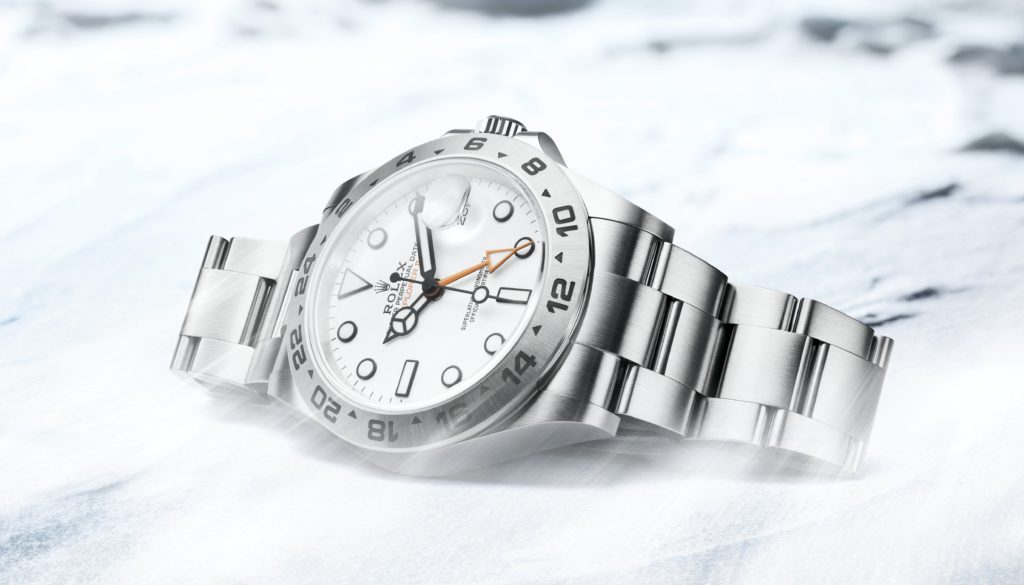 If the Explorer celebrates humanity’s victory of the tallest mountain peak, the Explorer II is the watch of choice for polar explorers, speleologists and volcanologists. In short, the Explorer II is a cutting-edge tool watch that has proven itself as an essential element in many daring expeditions.

Case in point: Ed Viesturs, a prominent high-altitude mountaineer who has climbed all 14 summits above 8,000 metres, and has done so without using supplemental oxygen. It goes without saying he deeply understands the importance of timing. “When climbing, time management is the most significant factor in my success, and ultimately my survival – particularly on the day of the summit ascent,” he elaborates. So, on each of his climbs, Viesturs wears an Explorer II. “It has never failed me and includes all the features I need for mountaineering: it’s self-winding, robust, and the hands are easy to read against the dial, even in the dark,” he observes.

“A durable crystal is also an advantage as it may hit rock and ice on an ascent. I have to admit it’s probably the most important piece of equipment I have with me. I am a serious clock-watcher during my climbs. My watch – and the time it tells – is the key to my safety.” This year sees the Explorer II updated with a new visual balance while remaining true to its aesthetic heritage. Naturally, this means perfect legibility even amid extreme conditions. In a perfect balance of contrast, the new generation Explorer II features hour markers with a black PVD (Physical Vapour Deposition) coating as well as black lacquer hour, minute and seconds hands with matt finishes, all of which stand out in sharp relief against the white lacquer dial.

Then there’s the model’s signature 24-hour display comprising an additional, orange hour hand and an engraved bezel. This intuitive feature is particularly useful in areas where it can be difficult – or even impossible – to tell day from night. Think underground caverns or the polar regions which experience six months of daylight and six months of darkness a year. Perhaps famed Norwegian explorer Rune Gjeldnes said it best: “Each minute counts in hostile environments – a precise watch is indispensable. It’s also useful if it displays the date, like the Explorer II. Even though we tend to lose the notion of a calendar on an expedition, it’s always nice to know whether it’s the 20th, say, as opposed to the 23rd.”

Interestingly, the 24-hour display can be used as a compass in certain conditions and also serves to show a second time zone. Naturally, the Explorer II also boasts the same optimized Chromalight display as the Explorer to further enhance legibility under the most extreme lighting conditions.

Finally, it goes without saying that the watch of choice for the bravest explorers is powered by superlative movement. In this case, it’s the calibre 3285, a movement entirely developed and manufactured by Rolex that was released in 2018 and is fitted on this model from 2021. Among its many impressive features – the development of this movement resulted in several patent applications being filed – is the Chronergy escapement and a guaranteed power reserve of approximately 70 hours, along with a Parachrom hairspring, which offers greater resistance to shocks and to temperature variations. Its architecture, in common with all Oyster watch movements, makes it singularly reliable.

So, no matter where your next adventures might take you – whether into uncharted territory or through familiar urban landscapes – the new Explorer and Explorer II offer the perfect combination of reliability and aesthetics, with a dash of heritage and history.