Time in Technicolour: Colourful Luxury Watches in Every Shade 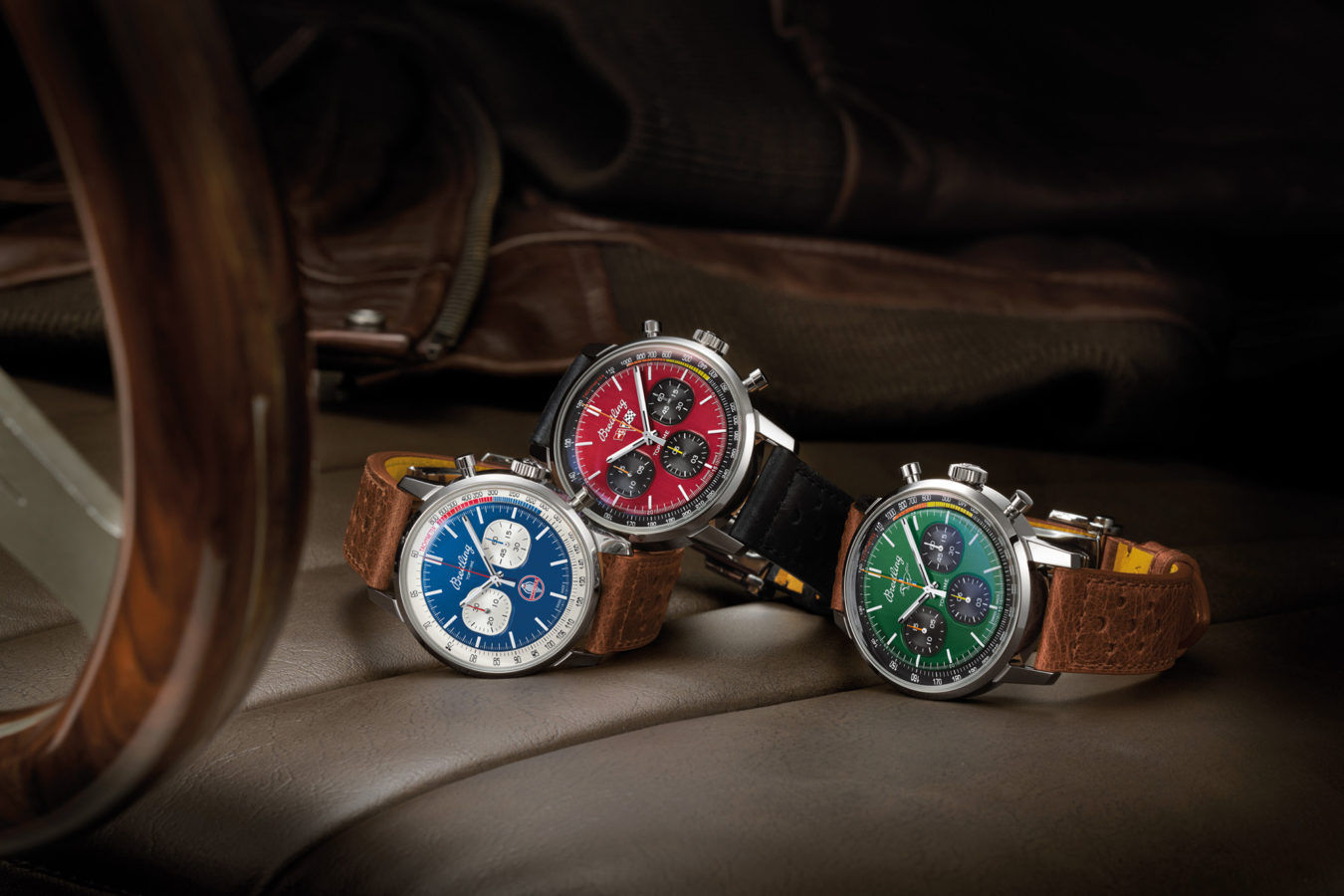 Style
Time in Technicolour: Colourful Luxury Watches in Every Shade
Share
Next article

Back in the day, watch dials were black or white, silver or gold. Now they come in just about every hue imaginable. We sift through the spectrum of shades you can strap on to your wrist, from vibrant red to regal violet – and even a veritable kaleidoscope of colour 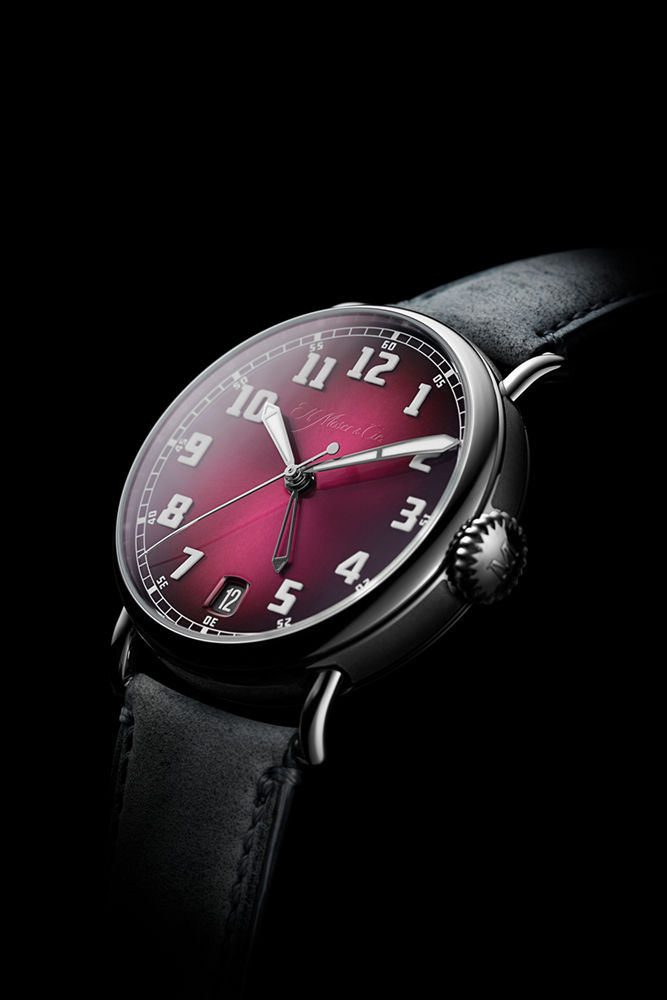 Although with a similar design to that of the Heritage Bronze “Since 1828”, depicted in our Agenda pages this month, H Moser’s Heritage Dual Time not only gets a lustrous sunburst fumé burgundy dial but, to burnish its already convincing vintage pilot’s credentials, it also features a second 24-hour hand that, when the user isn’t travelling, can cleverly be hidden beneath the main hour hand. If that weren’t sufficiently indicative of the ingenuity of this small, Schafhausen-based manufacture, the brand logo is rendered in transparent lacquer and, in certain lights, becomes almost invisible. In a 42mm steel case, the watch is powered by the automatic HMC calibre, which runs at 3Hz for a 72-hour reserve. 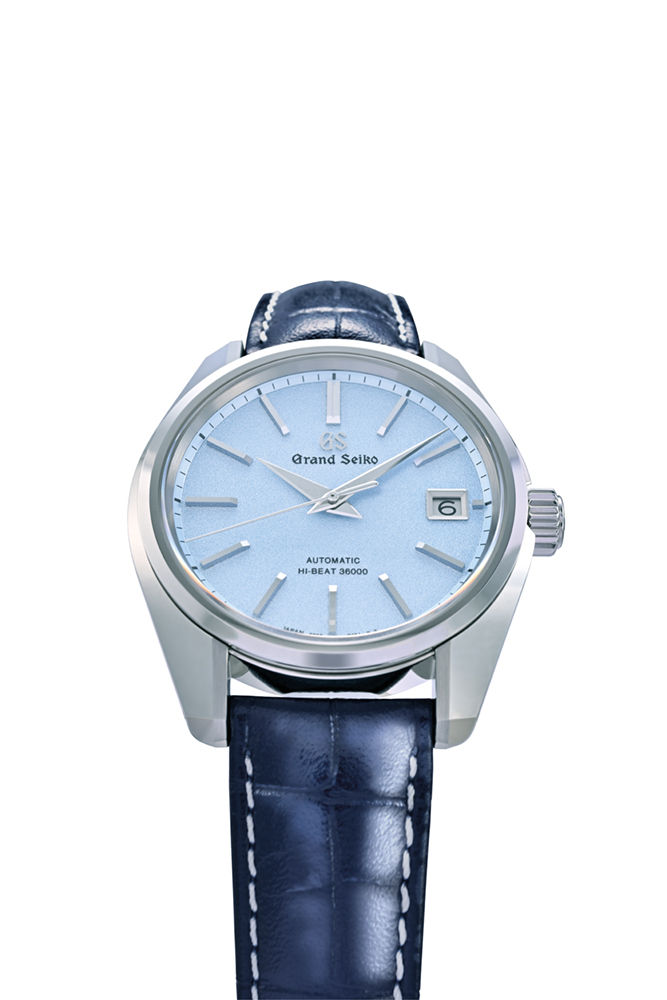 If the sword-shaped hands and multi-faceted hour markers (which glint beguilingly from whichever angle you look at them) weren’t sufficient to tell you it’s a Grand Seiko, then just look at the dial of this Snow on the Blue Lake limited edition. Inspired by the winter landscape of Hachimandai in Iwate prefecture, the delicate light-blue hue recalls sunshine on snow. With just 140 pieces available across five key Asian markets, this delightful and rare timepiece is presented in a 40mm steel case housing the high-beat 9S85 calibre, a super-accurate automatic movement offering a power reserve of 55 hours. 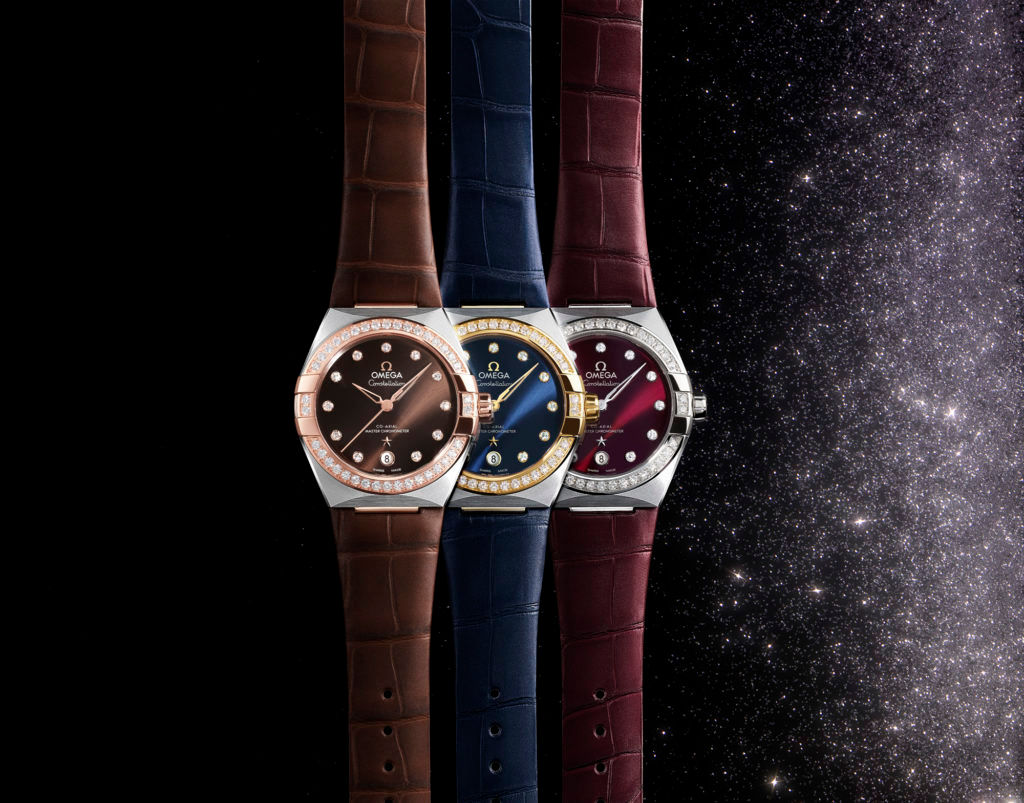 Although the current design codes of Omega’s dressy Constellation collection were set back in the early 1980s, such is the way of trends that it seems they’ve swung right back into vogue. It thus comes as no surpise that the brand has decided to further enliven the Constellation’s appeal with this recent drop of three 36mm ladies’ versions with diamond-set bezels, sun-brushed coloured PVD dials and matching alligator straps. While all have steel cases and are powered by Omega’s Metas-certified 8800 co-axial automatic calibre, the burgundy model features a steel bezel, the blue reference comes with a bezel in yellow gold and the brown version has a bezel in Sedna gold.

One of the main criticisms voiced when Audemars Piguet unveiled its Code 11.59 three years ago was that, while technically and in terms of craftsmanship the watches were exceptional, the dials were somewhat uninspiring – and especially on the simpler time-and-date models. The subsequent release, in September 2020, of five new chronograph and three-hand models with sunburst lacquered dials in blue, grey, burgundy and purple, went a long way towards addressing those issues – and especially as those opulent hues are offset with white and pink gold for the case and dial furniture, and matched with luxurious alligator straps. In fact, we’d even go as far as saying they’re actually rather fabulous. 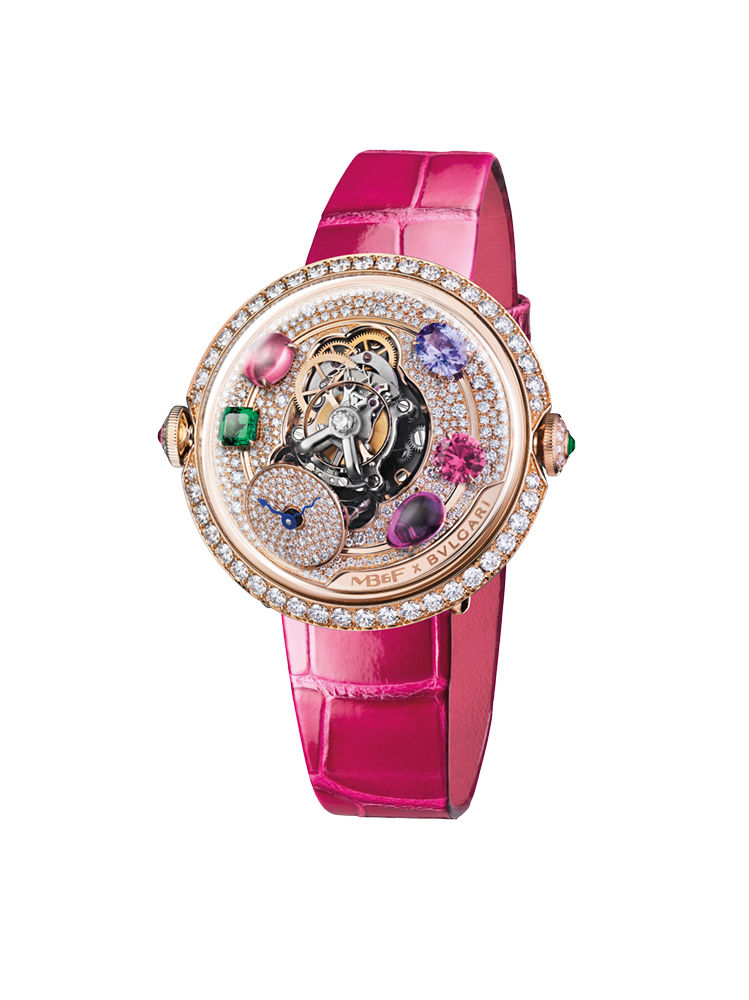 In an unparalleled collaboration, Bvlgari and MF&F revealed two extravagantly over-the-top, gem-set versions of the independent Swiss watchmaker’s Flying T at the recent Dubai Watch Week. One, shown here, is in rose gold with a pink alligator strap and the other comes in white gold with a green strap – and both are covered in clear and coloured stones. In 39 x 20mm cases with delicately high-domed crystals, these 20-piece limited editions aren’t watches that can be worn every day, but they do demonstrate the spectacular results that can be achieved when avant-garde watchmaking and high-jewellery creativity collide.

To Rolex-watchers accustomed to minuscule yet Earth-shaking changes in case diameters or bezel thicknesses, the company’s drop of new watches in the late summer of 2020 must have been a particular shock, because among them was a quintet of Oyster Perpetuals in 36mm steel cases and brightly coloured lacquer dials. Four of them – in yellow, turquiose, coral red and candy pink – are shown here; there was also a not-quite-so-shattering green, and this year they were joined by 36mm Datejusts with palm-motif dials in olive green, gold and grey. All these may be unusually light-hearted on the outside, but they’re resolutely Rolex within, boasting Superlative Chronometer movements with Chronergy escapements and a 70-hour reserve of power. 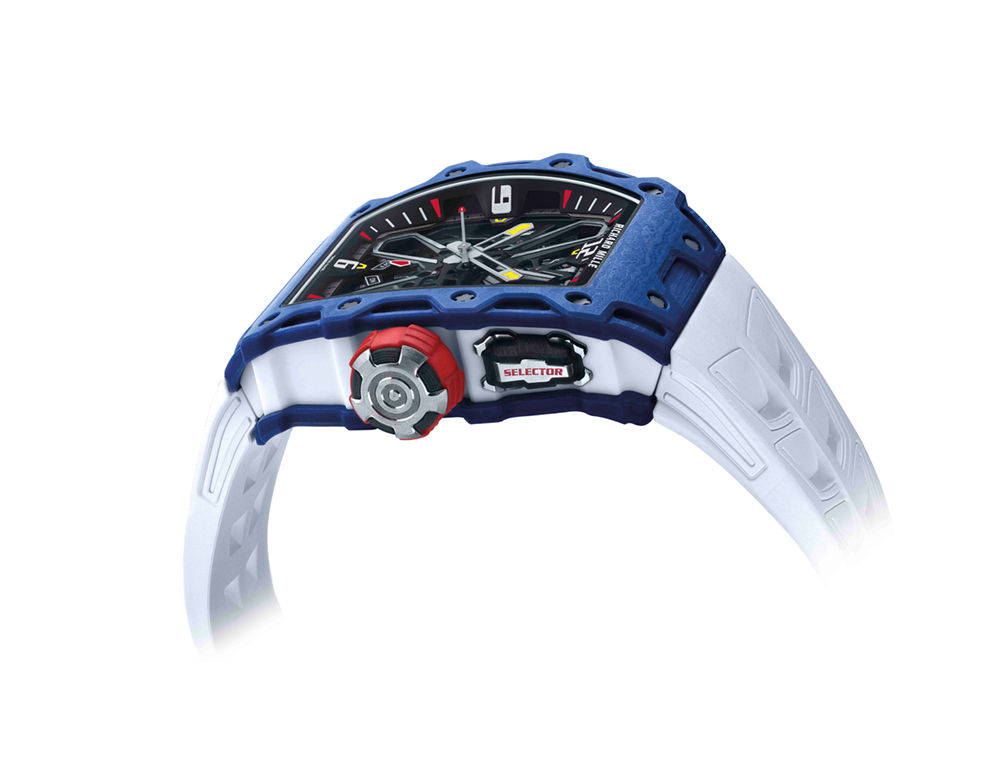 Yet another tribute to the long-time Richard Mille friend, ambassador and tennis great, the new RM 35-03 Rafa Nadal brings a new patented innovation – in the form of a butterfly rotor, three years in the development – to the brand’s high-tech box of tricks. This new feature, says the brand, “allows the wearer to directly interact with the rotor’s geometry, controlling the movement’s winding speed based on lifestyle and activity levels…” Philistines that we are, however, we’re more interested in the watch’s colour palette, which on this version includes blue Quartz TPT, red, yellow and white (there’s another model in mostly white Quartz TPT and light blue). 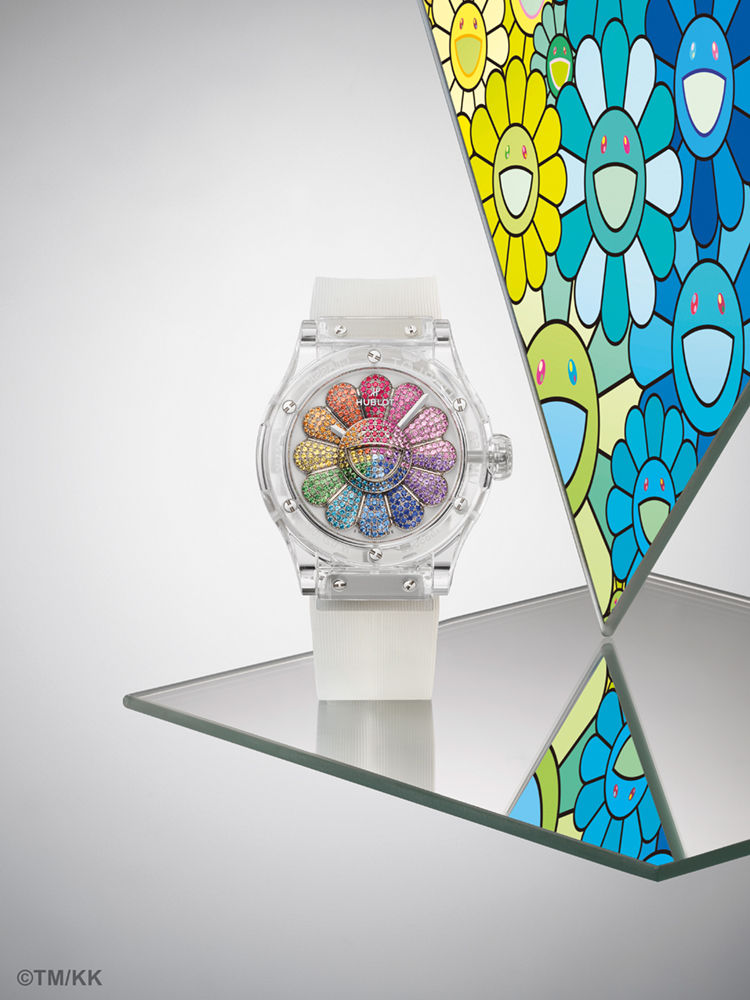 Never one of the shrinking violets of the Swiss watch industry, Hublot has become renowned for pushing the boat out – though in this, its latest collaboration with Japanese artist Takashi Murakami, the vessel in question is more superyacht than skiff. In fact, the limited-edition Classic Fusion Takashi Murakami Sapphire Rainbow, whose name pretty much says it all, is described by Hublot as “as whirlwind of transparency and colour”, which indeed it would be if you were to combine a 45mm case fashioned from solid sapphire with a rotating dial comprising 384 brightly coloured gemstones. And yes, if you were wondering, it even tells the time.

This colourful capsule collection of Top Time chronographs from Breitling, which pays tribute to three American performance cars of the 1960s – the Shelby American Cobra (left, with blue-and-white dial), the Chevrolet Corvette (centre, with red-and-black dial) and the Ford Mustang (right, with blue and black dial) – nails the vintage vibe perfectly. In 42mm (Corvette and Mustang) and 40mm (Cobra) stainless-steel cases and with racing-style leather straps, all three watches feature ETA-based automatic movements – on the 42mm models it’s the 1/8th-of-a-second Calibre 25, while the 40mm version gets the 1/4th-of-a-second Calibre 41; all beat at 4Hz for a 42-hour reserve of power. Pops of contrasting colour on each dial’s outer tachymeter scale ramp up the appeal still further.