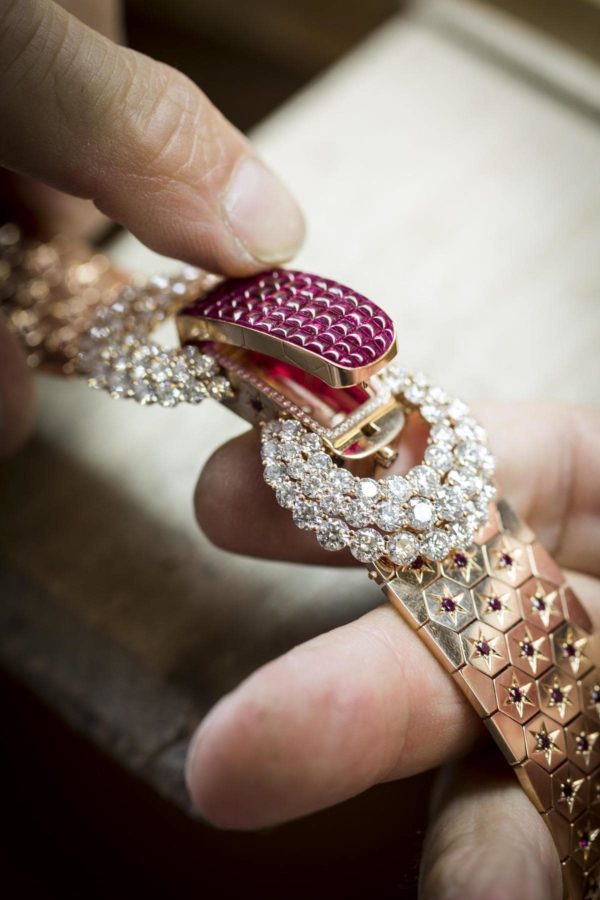 The worlds of couture and high jewellery have been entwined throughout Van Cleef & Arpels’ illustrious history. And one such piece that perfectly encapsulates both universes is the Ludo bracelet. A combination of innovation and elegance, its supple lines pay tribute to French high fashion by evoking the belt, a sought-after fashion accessory for bold, stylish women in the 1930s.

Created in 1934 by the maison’s artistic director at the time, Renée Puissant, the unique piece was bestowed the nickname of her cousin, Louis “Ludo” Arpels, one of the house’s founders and the youngest Arpels brother. An interesting point to note: it was Louis’ wife, Hélène Arpels, a model and the collection’s muse, who contributed to Ludo’s success when she was frequently photographed wearing the bracelet over long black gloves.

Resembling a textured ribbon, Ludo is a wide, articulated mesh composed of either small rectangular bricks (briquette) or honeycomb-like (hexagone) motifs arranged in a mosaic pattern. The first Ludo in 1934 featured briquette motifs, while the hexagone version was introduced the following year. Yellow gold was the favoured precious metal for most Ludo creations, but iterations in platinum were made as well.

A stylised belt-buckle-inspired clasp was another distinctive Ludo feature, adorned with rubies or sapphires placed with the proprietary Van Cleef & Arpels Mystery Set technique or with floral motifs. Both versions lent themselves to multiple iterations throughout the 1930s, which took the form of rings, watches as well as lapel clips worn on jackets or collars. Many Ludo pieces also flaunted a gemstone in the centre of each hexagonal link in serti étoilé or a star setting.

The Ludo was produced until the 1950s when the maison discontinued it. However, in 2019, it made a return with a line of four new bracelets. A year later, the iconic bracelet stole the spotlight again in a series of five Ludo Secret watches with quartz movements.

Featuring two styles, the new pieces showcase a white mother-of-pearl dial encircled by diamonds. On models with hard and precious stones, a cabochon pivots to unveil the iridescent dial adorned with a single gem star at 12 o’clock. For the Mystery Set versions, time is revealed beneath a blanket of sapphires or rubies. Combining different materials and gold, the bracelets are made up of a supple mesh comprising the familiar hexagone motifs from 1935. Each link flaunts a star setting of a ruby or sapphire in its centre to form a glittering constellation around the wrist.

The three Ludo Secret watches display a visually arresting combination of materials and hues. There are two yellow gold variants – one brings together chrysoprase, emeralds and sapphires, while the other is a colourful medley of lapis lazuli alongside blue and pink sapphires. Set in rose gold, the third version incorporates the warm hues of rubies and coral.

Precious and hard stones mingle within a symmetrical rose motif in an artful play of colours and textures. Depicted by gems of different sizes, petals are arranged around a large hard stone cabochon accented by a dazzling diamond halo. The bracelet’s end tip is finished with a gem-set motif that echoes the stones on the rose.

Using gold to interpret the fluidity of fabric presents the maison’s workshops a real technical challenge. Each hexagonal link on the articulated watch bracelets is meticulously assembled and individually adjusted by hand to create a delicate weave. Expert gemologists select the precious materials according to the most stringent criteria – lapis lazuli, coral and chrysoprase are chosen for their intense and even colour, while the dial’s mother-of-pearl combines harmonious shades, a regular surface and lustre of the highest quality. Even matching the hard and precious stones – revealed in various cuts that include cabochon, pear-shaped, navette (marquise) and round – is an intricate task.

Following Van Cleef & Arpels’ tradition of transformable pieces, Ludo Secret watches can be donned in a variety of ways. The bracelet can be worn on its own by replacing the rose motif with a precious stone-set hexagonal mesh buckle. Additionally, the floral motif can be worn as a brooch or pendant when it is threaded on a long gold chain.

The maison also unveiled two unique Ludo Secret pieces inspired by the Ludo Hexagone Macarons secret watch from 1941. Featuring a version in white gold set with sapphires and another in rose gold adorned with rubies, both timepieces are accentuated with diamond encrusted loops on both ends of the dial. Adding graceful curves to the red-carpet-worthy creations, they frame a slightly convex motif in Mystery Set rubies or sapphires, intensifying the already rich colour of the gems.

A jewellery-making feat, the Mystery Set technique involves inserting precisely cut precious stones onto extremely thin gold rails. Once in place, the gems – buff-topped sapphires or rubies in this case – blanket the surface so seamlessly without any visible metal that they impart an incredible velvety sheen. It requires such a degree of expertise to create a Mystery Set piece that the complex method remains, until today, the exclusive preserve of a few Van Cleef & Arpels master jewellers known as the Mains d’Or.