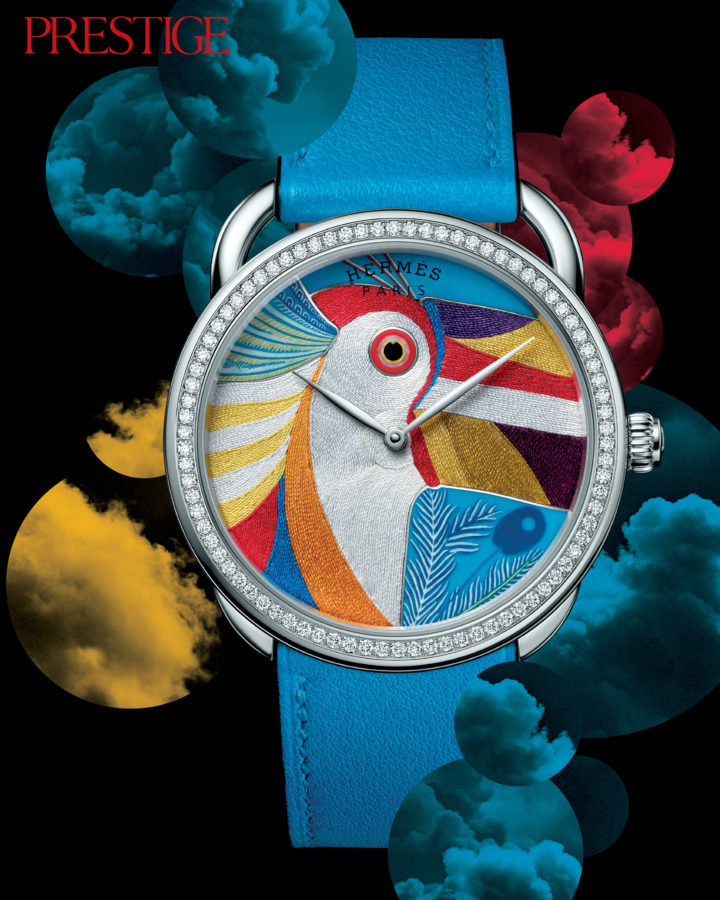 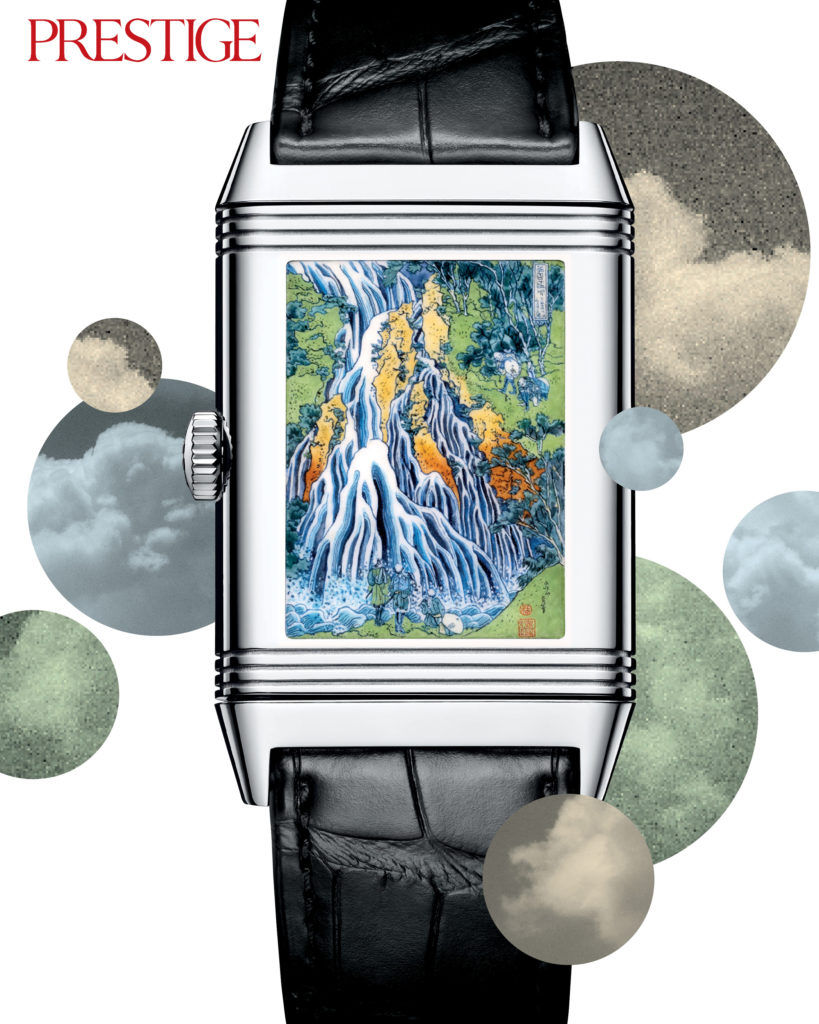 Limited to 10 pieces, the Reverso Tribute Enamel – Hokusai “Kirifuri Waterfall” marries European craftsmanship with Japanese art. The reverse side of the white gold case showcases a miniature enamel painting that faithfully reproduces a woodblock print of the Kirifuri Waterfall made by artist Katsushika Hokusai in the early 1830s. Beyond reproducing the work onto a surface that’s a tad more than one-tenth the size of the original, the enameller had to mimic and create the illusion of the woodblock printing technique, which produces an effect entirely different from enamelling. The dial is decorated with a unique, wavy guilloche pattern that resembles moving water. Executed by hand with a century-old lathe for which a special cam was tooled to achieve this pattern, the wavy effect is amplified by layers
of translucent grand feu enamel in a soft green shade that matches a detail of the painting on the reverse side. 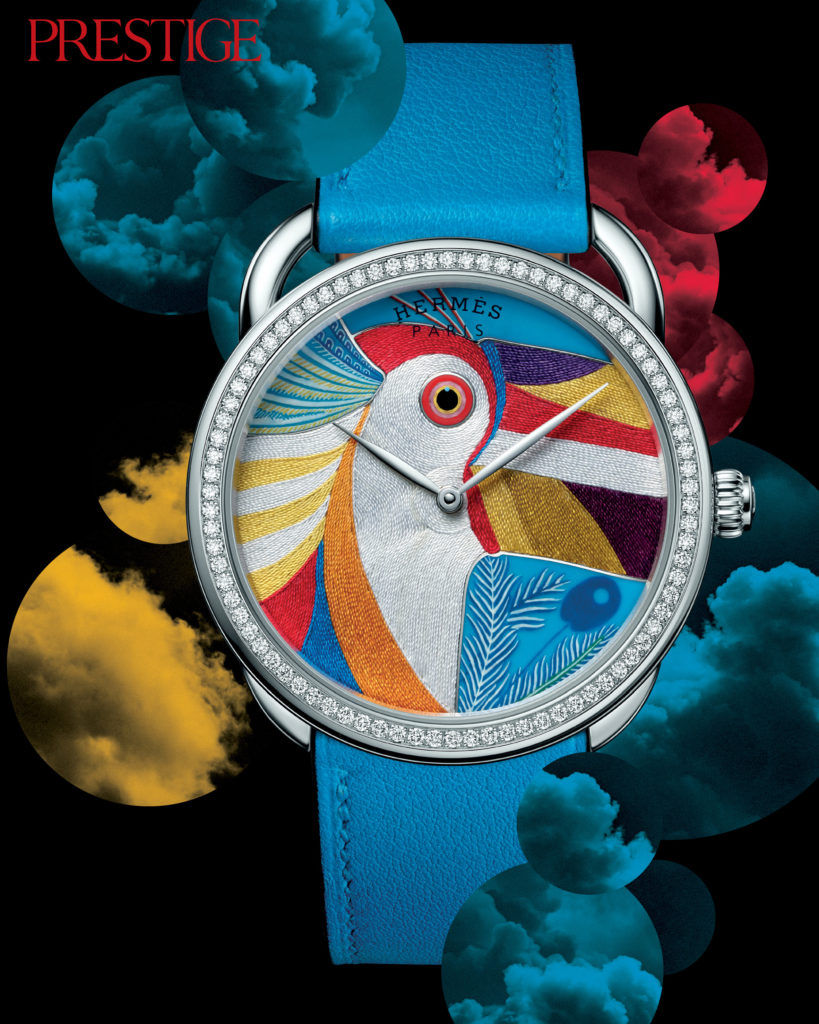 The vivid Arceau Toucan de Paradis dial incorporates two crafts that took five years to perfect: miniature enamelling is highlighted with the use of multicoloured silk threads – a unique and exclusive Hermès technique inspired by a kimono weaving workshop in Japan. Composed of 500 individually assembled threads, the Amazonian bird motif requires an entire week to create. First, the white gold base is enamelled. The artisan then uses a very fine brush to coat it with glass powders mixed with natural oils, which are applied in several layers, dried and fired in the kiln. Recesses to house the silk threads are engraved around the enamelled surfaces. Each thread is meticulously positioned and fixed into place to create subtly shimmering light and preserve a perfect weave. The 38mm white gold case with a diamond-set bezel frames the  eye-catching dial and houses the Hermès H1912 self-winding movement. A Zanzibar blue calfskin strap accentuates the colours of the watch, which is issued in a numbered, limited edition of 24 timepieces. 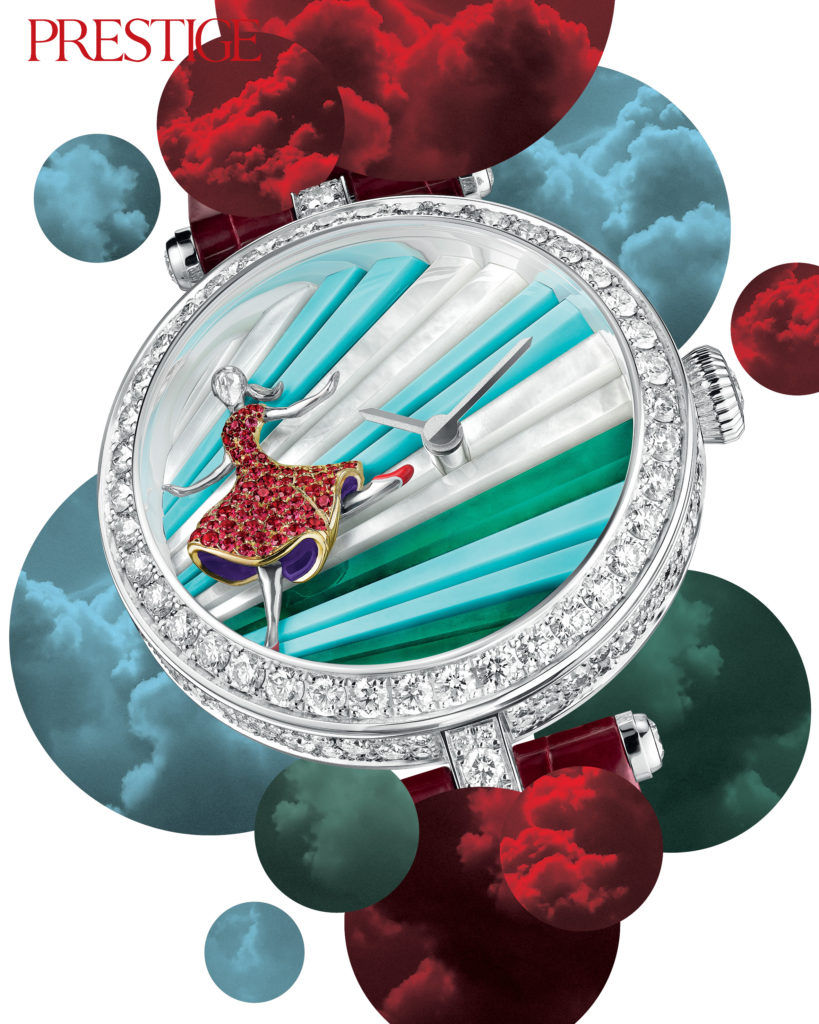 One of two new dance-inspired timepieces enriching the maison’s Extraordinary Dials collection for the first time, the Lady Danse depicts a solo dancer in the midst of a twirl. On this 33mm white gold, manual-winding mechanical watch, the dainty subject sparkles with a single diamond-set face. Studded with rubies and hemmed with yellow gold, her ‘50s-style dress swishes as she performs an arabesque. Her ballet slippers, adorned with the miniature painting technique, also catch the eye in scarlet red. Sculpted in relief, her silhouette contrasts beautifully against the dial’s backdrop – a dynamic, three-dimensional marquetry of ornamental stones. To achieve this, white mother-of-pearl, turquoise and chrysoprase are intricately cut, then carefully assembled side by side. The result: a striking effect of perspective that amplifies the dancer’s movement. The performance continues on the back of the watch, where an engraving offers a poetic interpretation of the scene on the dial. 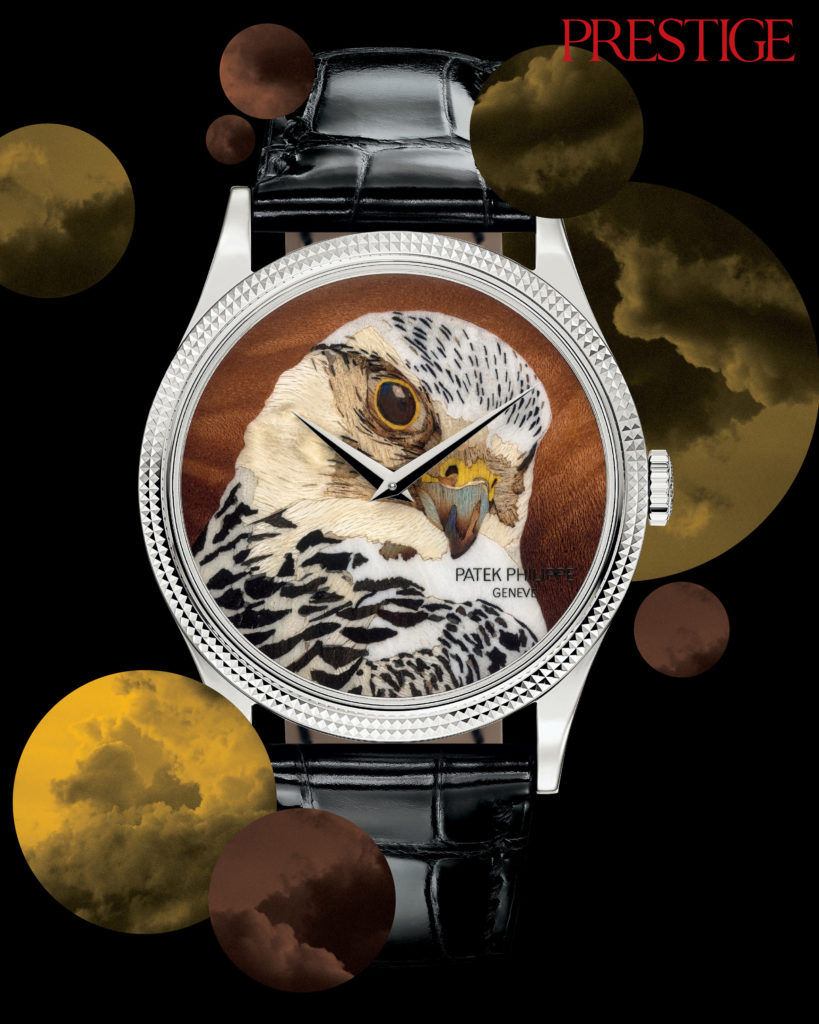 A symbol of power, the falcon lends its majesty to the dial of this limited edition that flaunts the rare and complex technique of wood marquetry. To produce the regal bird in all its rich detail, the marquetry artist cut out and assembled 168 tiny pieces of wood and 200 inlays, some of which were barely visible to the naked eye. Realising the harmonious colour scheme and the portrait’s vitality required 20 species of wood in different shades, textures and veining. These included several varieties of maple, burr walnut, grey poplar and more. The bezel on the Ref. 5177G-024 Falcon Head is adorned with the hobnail pattern that has made cult watches out of some Calatrava models. A white gold case houses the calibre 240 ultra-thin self-winding movement, which can be seen through the exhibition caseback. 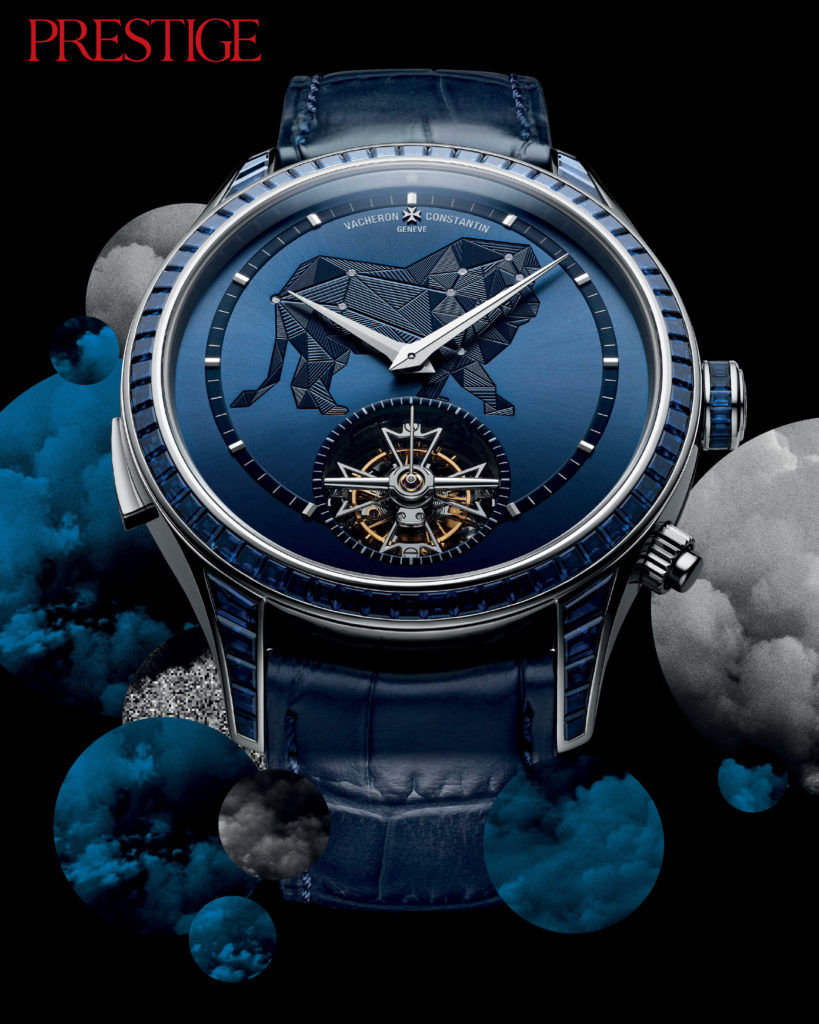 The quiet elegance of the Les Cabinotiers Minute Repeater Tourbillon Sky Chart Leo Constellation Jewellery watch dial belies the pièce unique’s extreme technical complexity in decor. The Leo constellation is staged to great effect on the dark blue opaline dial. A masterpiece of hand guilloche craftsmanship, the lion’s silhouette comprises a multitude of triangles, each bearing its own pattern. Since the rose engine lathes hand-operated by skilled artisans are designed to engrave decorative elements that are typically circular and geometric, one can imagine the exceptional savoir faire required to depict the big cat in various-sized polygons, whose linear engravings provide striking effects of depth. Stars that compose the constellation are represented by brilliant-cut diamonds. Displayed on the back of the watch via a concave dial designed to accentuate depth, a celestial chart offers a striking view of the Milky Way and constellations that appear in real time, as if seen through a telescope. Special mention goes to the Calibre 2755 TMRCC, which integrates three major horological complications: a tourbillon, minute repeater and rotating sky chart. Lastly, 100 baguette-cut sapphires bezel-set with laser precision on the lugs, crown and bezel add colour and sophistication to the piece. 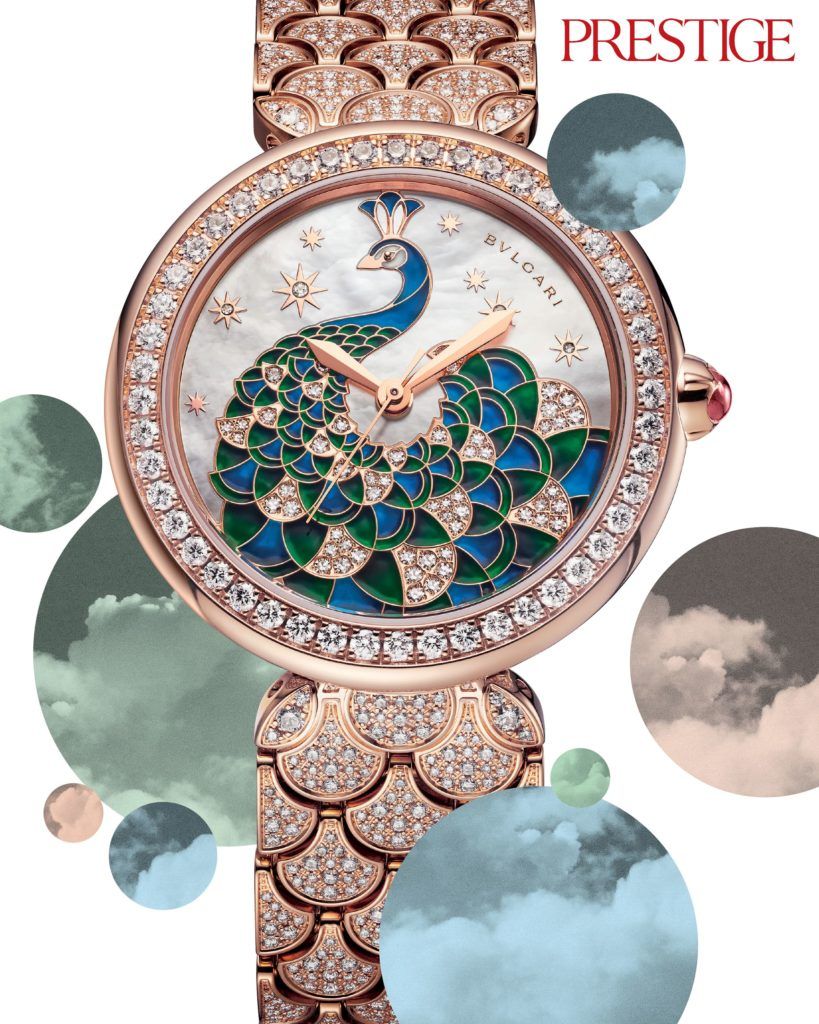 The Divas’ Dream Peacock Diamonds showcases an entrancing bird motif set against a lustrous mother-of-pearl backdrop. The delicate hand-painted feathers evoke precious Roman mosaics in shades of blue and green. Known as champlevé, this demanding technique dates back to the Middle Ages, and involves the engraving of the base metal so that miniature painting, enamel and marquetry can be applied onto the cells thereafter. Some 20 hours are needed to imbue the 14 colours onto this peacock, whose gold outline is slightly raised, creating a wonderfully textured effect. Here, the dial’s rich hues are punctuated with diamonds and enhanced by a supple diamond bracelet swathed with the signature Diva fan-shaped motif. Driving the 37mm rose gold model is the Calibre BVL 191, a mechanical self-winding movement. 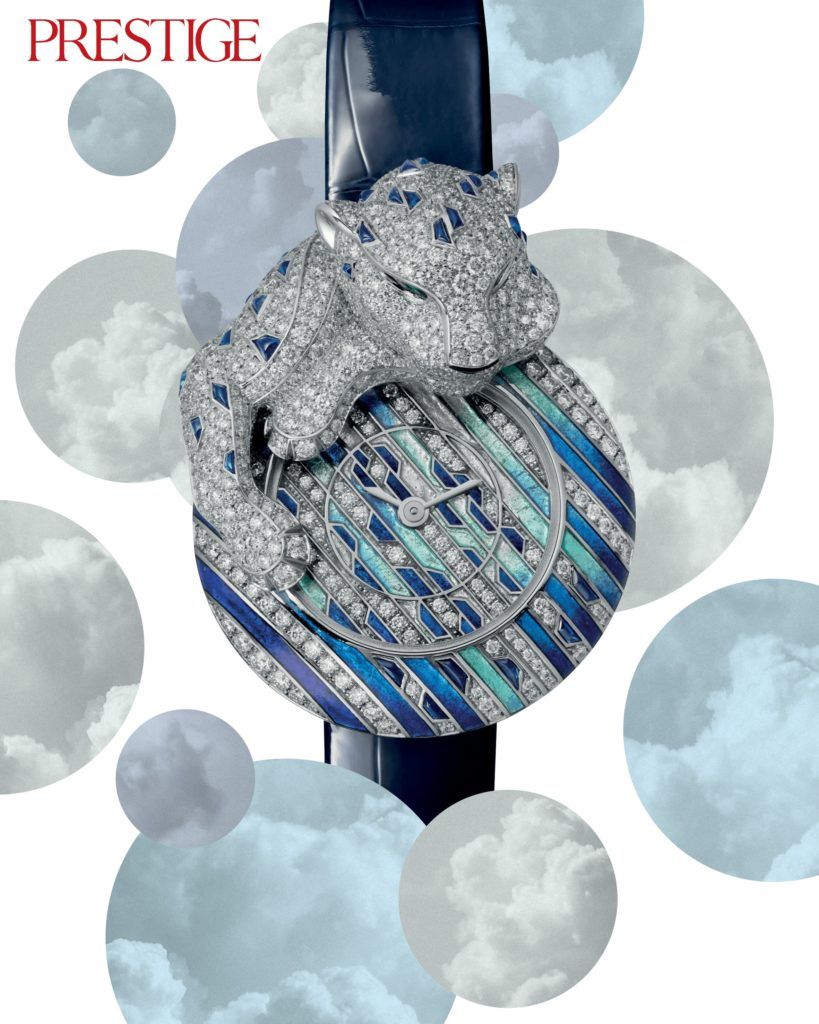 One of three Panthère Songeuse precious timepieces presented at this year’s Watches & Wonders, this astounding model showcases an artisanal technique that Cartier holds dear: champlevé enamelling. Executed by the master artisans at the Maison des Métiers d’Art, the process is laborious. First, enamel powder is deposited in tiny cavities in the metal. After all five colours of enamel are fired, the polisher adds the final touch, which softens the gradient effect. The enamel work alone requires four days to be completed. Setting the dial and case with diamonds takes 15 hours, while assembling the panther motif with emeralds, onyx, sapphires and diamonds takes another 120 hours. The 28.4mm enamel creation in rhodium-finished white gold is a limited edition of 30 individually numbered watches. Issued in just eight pieces to commemorate the 300th anniversary of founder Pierre Jaquet-Droz’s birth, the Bird Repeater – an automaton with a minute repeater – is the culmination of all the house’s Ateliers d’Art techniques in a single piece, blending traditional watchmaking know-how with unrivalled automaton expertise. Entirely engraved, painted and assembled by hand, the scene on this incredible dial depicts the idyllic landscape of La Chaux-de-Fonds. And if you look closely, the farmhouse on the right is a replica of the founder’s birthplace three centuries ago. Breathing life into this 47mm red gold creation is the animations of two robins feeding their hungry chick, and an egg hatching. The Bird Repeater 300th Anniversary Edition is powered by the hand-wound mechanical movement and minute repeater, Jaquet Droz RMA88.