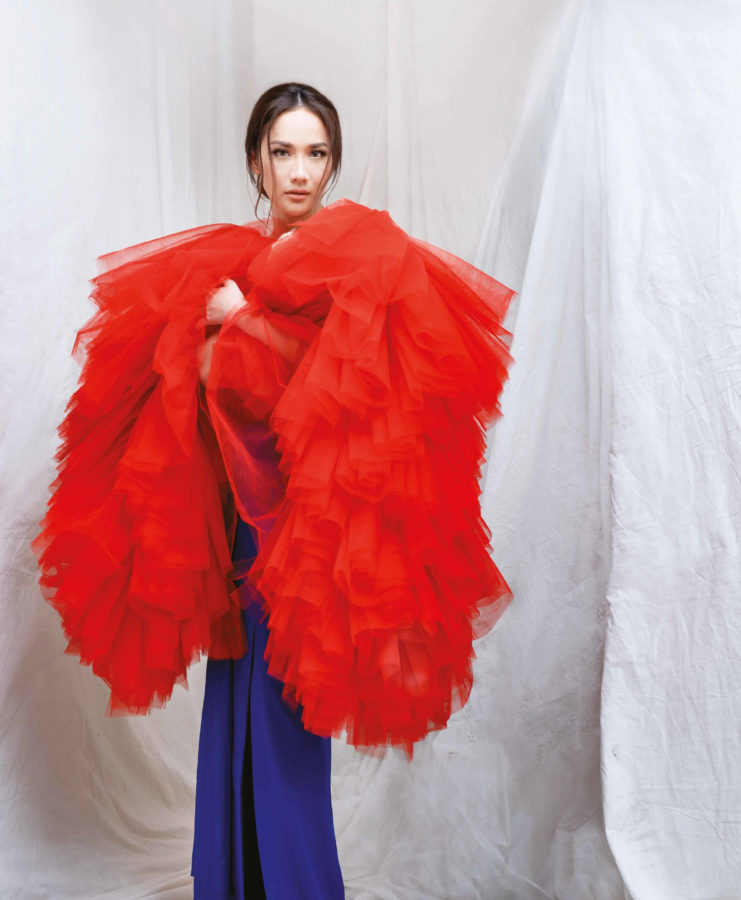 2020’s It Celebrity of The Year: Bunga Citra Lestari Talks to Prestige About How She Learned to Understand Herself Again

The Lists
2020’s It Celebrity of The Year: Bunga Citra Lestari Talks to Prestige About How She Learned to Understand Herself Again
Share
Next article

Being forced to stay at home might feel limiting for most people. But for singer Bunga Citra Lestari, it became an awakening moment. “There has been a lot of adjustments in my life during the past few months,” she begins. “Especially as a singer, I’m being challenged to create something different. Shows and concerts are moving to virtual platforms and I have to think about how to grab the attention of my audience.”

While contending with the challenges of sharing a living space with her parents and a child, Bunga found a unique place where she could work: the attic. “It’s a multifunction space that was built for hanging out with friends, doing photoshoots and working. Basically, I can do just about anything as the furniture can be moved around,” she elaborates. “At one point I was taking my time, trying to understand myself better and rediscover my passion. Then I thought about doing shows from there and it eventually became an iconic place: BCL’s attic.

“I shoot my virtual concerts and music videos there. It takes a lot of extra work, which is challenging, but at the same time it provides me with a new creative perspective amid all these limitations,” Bunga continues. “My team and I, especially the creative director, have to come up with new ideas. Because while the place is always the same, every show has to have different vibes and concepts. I want to send out the same energy as in my offline concerts, and the visuals play an important role in that part.” To that end, Bunga and her team has created forest scenery, art installations using traditional fabrics, and futuristic light shows for the “Use Love to Beat Heart Disease” virtual concert in collaboration with Yayasan Jantung Indonesia (YJI).

“At the time, I found a new way to express my feelings, which is through writing, either poems or just random stuff that I need to let out from my mind. I used to have someone I could talk with about anything, but he is no longer here and I don’t have anyone to share with anymore.” – Bunga Citra Lestari

“I also use my songs as a form of storytelling that reflects my healing process. The set lists are my life stories with new arrangements and singing styles. On the other hand, I have to be in sync with the band supporting the show, and this involves a lot of trial and error since I’m very particular,” Bunga continues. While it hasn’t been an easy ride, she acknowledges that the team is getting used to her work rhythm, including the way health protocols have to be followed. “I even did my own makeup and hair at first,” she quips.

Against this story of creativity, however, hung a tragedy from earlier this year. In February, Bunga lost her husband, Ashraf Sinclair, and nothing has been the same since then. “Everything was moving so fast. I was chasing something that I didn’t understand. Everyone was running, everyone was competing, until it happened and the pandemic soon followed,” Bunga reminisces. “We were forced to slow down, but, actually, we also had the chance to look deeper into ourselves.

Everyone has their own way of dealing with grief, and so did the mother of ten-year-old Noah Aidan Sinclair “I fell hard and my world just stopped,” Bunga begins. “At first, I simply locked myself home and tried to deal with everything, even when every corner reminded me of my late husband. I questioned what I would be doing without Ashraf who meant so much to my life and my career. At the same time, I had to be there for my son.”

But then she turned a new corner. “As I relearned about myself, I remembered that Ashraf always wanted me to grow and how he believes that I actually have the power to do whatever I want in my life,” Bunga goes on. “At the time, I found a new way to express my feelings, which is through writing, either poems or just random stuff that I need to let out from my mind. I used to have someone I could talk with about anything, but he is no longer here and I don’t have anyone to share with anymore.”

Life, however, kept moving forward, and Bunga gradually gathered her strength, stood up and began walking again with a new face. “I wanted to keep pursuing my passion,” she asserts. “Slowly but surely.”
One fateful day, Ifa Fachir, a close friend of Bunga and a fellow musician, came to her with an idea for a song. “He was influenced by the musical score of a Korean drama and asked if I would be interested in listening to it,” Bunga recalls. “As it turned out, I fell in love with the song. It was romantic; deep but sweet. However, he couldn’t write the lyrics and asked me to do it. To be honest, even with my experience of being as singer for more than a decade, I never had the courage to actually write a song. So, it was a leap of faith. The single ’12 Tahun Terindah’ was born from one of the poems I wrote and matched with the theme of the song.”

Bunga ended up doing everything – from writing the song to recording – by herself at home. “I began by buying all the recording equipment I needed and installed all of them at home. I learned about the technical side of recording by myself, with guidance from my music director and my team through Zoom. It was crazy, but the result turned out great and it gave me a confidence boost to create something bigger and impactful.

“As part of my journey of healing, ‘12 Tahun Terindah’ speaks about my feelings, what I’ve been through in the process of understanding and accepting the situation I’m faced with. I’m still in the middle of it all, but I’m thankful for whatever I have. The past 12 years were beautiful. Part of it was painful, but what I had with Ashraf is beautiful and irreplaceable. It meant so much to me, and as a singer, what I can do is deliver all of that through a song.”

“This year also taught me to grow and adapt amid unpredictable situations. It shaped me, changed my perspective. I became a new person and learned to let go of the things that I can’t control. Not everything I’ve been through has been sad, but I take it as opportunities to become a better and bigger person.” – Bunga Citra Lestari

And it didn’t stop there. As part of her journey, Bunga also started the #BCLmelangkahlagi – BCL steps forward once again – hashtag and created a number of short movies titled “Dear Love…” for her YouTube channel. “It is my letter to Ashraf. A compilation of photographs and my voice over because I’m not ready yet to show my expression,” Bunga says.

Yet another major development in Bunga’s life is her decision to step down from her position as one of the judges on “Indonesian Idol.” “There was a lot of laughter and joy since ‘Idol’ was like a family for me. But for now, the last memories from this competition was from a moment where my whole life changed, and I’m not ready to continue yet. By becoming a judge on the show, you become responsible for someone’s future. It takes a lot of time, dedication and long-term commitment to do all of this. Having taken everything into consideration, I decided not to force myself to run in this direction and I also won’t expect the world to follow my current people. There are a lot of people involved in the competition and I don’t want to become an obstacle for them. I’m going to take my own time and rebuilding my strength. I’m still walking, I’m not ready to run yet.”

All in all, however, Bunga is grateful and – more importantly – hopeful for what’s to come. This is mainly thanks to her great support system: her family, friends, the BCL team and her fans. “They are very supportive and concerned with my well-being. I might be staying at home, but when I have to do something, I wouldn’t be able to do so without the support of the team. I know that I’m not walking alone.”

For Bunga, 2020 was a life-changing year. “It is a special year,” she points out. “Many people, including myself, are being tested to the limits. I’m not a very positive-thinking person who will easily say that there will be a rainbow after the storm. But I’ve learned to be honest with myself and take my time. Looking at all that’s happened, I can personally see my own quality and how far my capabilities can go. This year also taught me to grow and adapt amid unpredictable situations. It shaped me, changed my perspective. I became a new person and learned to let go of the things that I can’t control. Not everything I’ve been through has been sad, but I take it as opportunities to become a better and bigger person.”