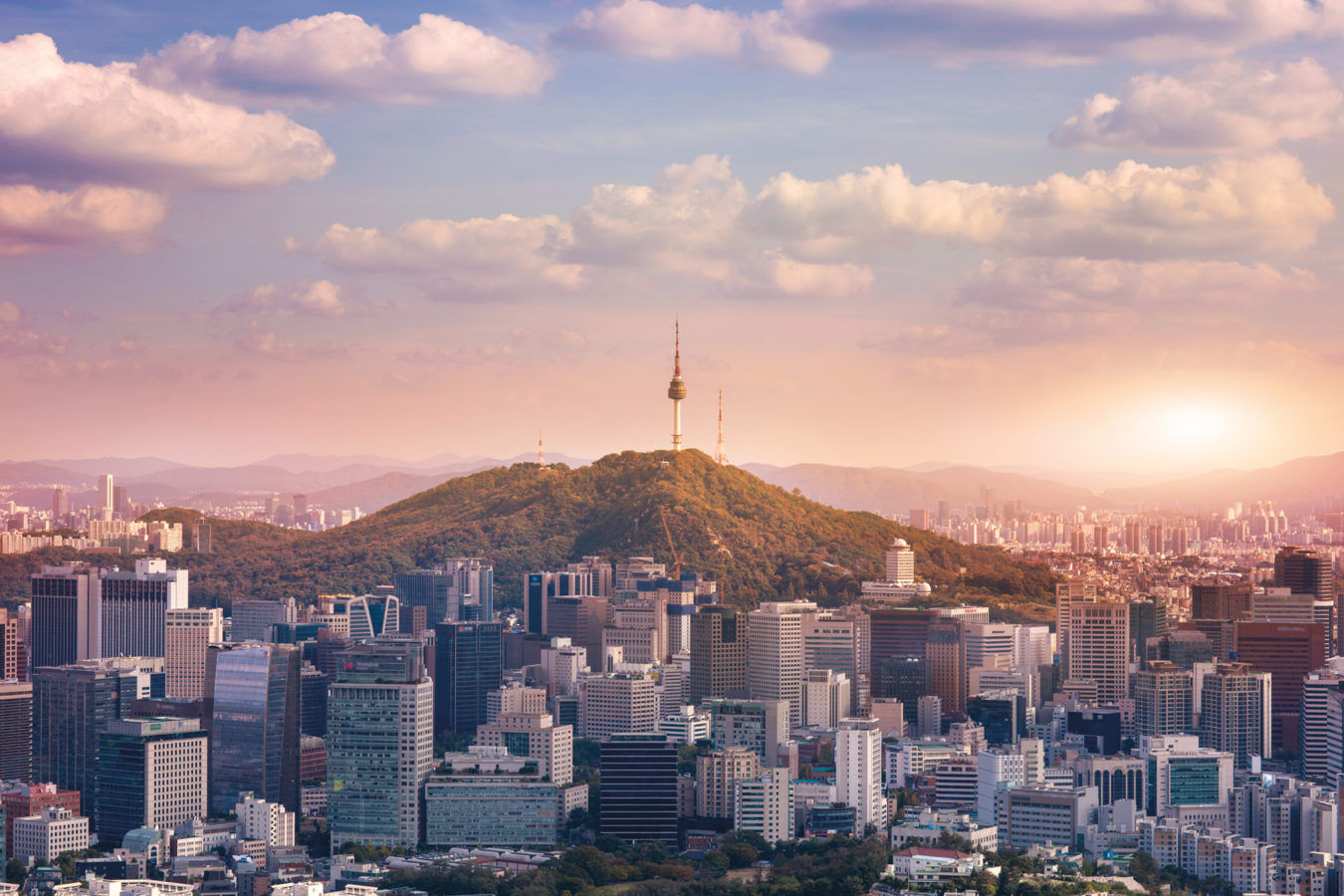 A poster child for Asia’s modern metropolis, South Korea’s cool and chic capital fascinates many and repels some at the same time. Mavis Teo shares the highlights of her recent trip so that you may plug into the city’s finest experiences.

I am falling asleep as I lie on a soapy vinyl covered bed in my birthday suit while a stranger contorts my limbs to access every nook and cranny of my body with her exfoliation-gloved hand. In a warm and steamy room of around 34 deg C, I am complete putty in the hands of this ahjumma (Korean aunty). I didn’t expect to get this cosy with her. Dressed in a matching black bra and panties – apparently the standard “uniform” for what the Koreans call a scrub mistress, the middle-aged, pint-sized therapist nudges me into a pretzel as she sloughs dead cells and gunk off me.

It could be her kind and disarming smile, or maybe it’s the relaxing ambience at the Korean Sauna of Four Seasons Hotel Seoul where I am staying. Outside my treatment room, a few local women soak in oversized hot and cold baths made with 18-carat Italian Bisazza gold mosaic tiles, in between trips to the sauna or steam room. Most are enjoying quiet time, while two ladies chat softly between themselves. The atmosphere is a far cry from what I have seen on the telly of traditional Korean bathhouses – known as jjimjilbang, where people sit on the floor in t-shirts and shorts provided by the spa, busy chatting and snacking.

But then this is the Four Seasons Hotel Seoul, renowned for unparalleled luxury and for being an oasis of calm in the high-octane capital of Seoul – even though it is in the Gwanghwamun district located within the very heart of Seoul. And in this bustling and dense city, a quiet spot to retreat to is highly coveted, so much that many luxury hotels have private members clubs that are highly subscribed by affluent locals in need of a place for relaxation or socialisation.

Despite its “Land of the Morning Calm” nickname, South Korea’s capital is anything but. The rapidly evolving city knocks the wind out of some visitors. South Korea’s stellar rise in just a few decades – from poverty and destruction in a series of events such as a 35-year occupation by the Japanese, and the brutal Korean War that spilt the country (and families) into north and south – is an impressive feat.

Despite how modern it seems and the connection many think they feel with the country from watching K-drama, South Korea is in reality quite unique in itself. Ask any foreigner, especially non-Orientals, who has visited the destination on their experience, and you are likely to get an ambivalent answer. Some feel that the country is still relatively insular, resistant to foreign cultures, and seems reluctant to communicate in English, even when some can.

This conservatism seems at odds with the vibrant modernity that South Korea presents to the world. But it is real. Even among Seoulites, the sense of isolation can be challenging and hence people tend to band together. As aloof as some Seoulites seem on the surface, there are many kind souls – as with any place, as I have so discovered myself and through their recommendations, have a great time.

Members Only – And Foreign Guests

Forming cliques and belonging to one seems to be a huge part of social dynamics in South Korea. Therefore, hotels that feature a members-only club are a popular hangout for locals, especially the affluent. For a foreigner, there is no better way to see and experience Korean high life than to park yourself at some of the city’s finest lodging. And as you already know, I started with a stay at the Four Seasons Hotel Seoul.

With floor-to-ceiling windows, the generously-sized rooms are bathed in natural light even in the dead of winter, lifting one’s spirits while offering panoramas of the beautiful Gyeongbokgung Palace, the impressive N Seoul Tower, and the picturesque Cheonggyecheon Stream.

The hotel is not short on top-notch F&B experiences either. Yu Yuan, the Chinese restaurant that won a Michelin star from 2017 to 2021, is popular for its authentic Cantonese cuisine. Another must-visit is the Charles H, a speakeasy bar (have fun finding the door) where head bartender Keith Motsi serves cocktails so heady and delicious that the establishment has become an annual fixture on the World’s Best 50 Bars list. Although Korean fried chicken is easily found throughout the city, order the dish here as it is a perfect combination of tender and crispy, and absolutely unforgettable.

The Josun Palace, opened in May 2021, has taken exclusivity to a whole new level. The Luxury Collection Hotel in the Gangnam district recently launched a 150-person only club that entitles members to its ultra high-tech and high-end fitness club, and classes the likes of which not many have seen. These include small-group sessions accompanied by live music played by a cellist. At the time of print, many of the membership spots at this hotel, owned by the Lee family of Shinsegae department store, have already been snapped up.

Fret not if you are not chaebol. Hotel guests could pay to join some classes. The property is also worth checking into for its vast collection of local artworks, many of which are specially commissioned by the hotel. What else is different here? Even the most basic room has a clothes steaming closet, giving added convenience to the busy guest who tends to forget to put aside their dry cleaning.

Park Hyatt Seoul is understated and low-key, making it the perfect spot for many of the city’s celebrities to meet one another (and for us to spot them). The discreet staff do not speak about their guests, but a 10-minute wait for a friend at the hotel’s entrance gives me a glimpse into the cars, and their owners that frequent the hotel. Word has it that many of them meet at the Timber House. Besides privacy, the dark and cavernous basement bar also offers some of the best and rarest cigars in Seoul. Design aficionados would also love that the rooms’ minimalist granite and pale wood interiors were conceived by Japanese firm Super Potato.

On the speed dial of every self-respecting Seoul woman is the number of her aesthetician (or plastic surgeon). So common is getting tweaks, or nips and cut, among Korean women that there is very little stigma in having had enhancements, whether minor or major. Ask any Seoulite the secret to her radiant skin, and you will break the ice and be let into her secret.

Upon the recommendation of a socialite who requested to not be named, I check into Oracle Clinic, which counts overseas royalty and celebrities among head plastic surgeon Dr Wang Jae Kwon’s patients, for a non-invasive 10Thera treatment. Featuring the latest High-Intensity Focused Ultrasound (HIFU) technology that is supposedly not yet available in Singapore, it restores elasticity in the skin and boosts collagen growth. Developed by Oracle itself, the treatment promises twice the efficacy in half the treatment (at half the price of traditional HIFU treatments). I am pleased to report that true to its claim, my jawline appears visibly lifted and more defined a week later.

For something more pampering, fans of uber-luxe The History of Whoo beauty brand may wish to check out its offerings while in Seoul. While the flagship store has closed during the pandemic and yet to reopen (although there are plans), customers will still get first dibs on new product launches in Seoul at its counters in major department stores. There are overseas customers who would visit Seoul for MyeongUiHyang, a specialised skincare range for ultra-sensitive skin that is the only collection not available in Singapore, and also for the special exhibitions that The History of Whoo would hold during the country’s annual Royal Culture Festival in October.

There is much more to Korean cuisine than kimchi and bulgogi, delicious as these might be to many people. While there are now more fine Korean dining establishments in Seoul and internationally, Chef Yim Jung-sik has been largely credited as the pioneer of New Korean cuisine.

Two years after opening his eponymous restaurant in the city, the alumnus of Culinary Institute of America ventured back to the States in 2011 to open an outpost. His goal: to introduce to the world a modern interpretation of Korean food by melding Korean ingredients with Western techniques and plating. Three years within opening, Chef Yim’s New York establishment won two Michelin stars. For a taste of the maestro’s finesse, book a table at the Seoul restaurant as the personable chef is stationed in the capital for now.

Gathering over lighter fare is also a popular activity among the well-heeled in Seoul. And Korean temple food is the perennial cuisine of choice, regardless of each individual’s religious beliefs. There is even the Institute of Korean Temple Food, named Hyangjeoksegye, where visitors may attend cooking lessons, learn about the Korean tea ceremony, and discover unique monastic practices including the pairing and pacing of formal meals, as well as the environmentally friendly culinary customs.

The most popular restaurant for temple food in the city is Balwoo Gongyang, which is run by the Jogye Order of Korean Buddhism and helmed by Chef Kim Ji Young. It features original, traditional recipes passed down through the ages. The beauty of the cuisine served at Balwoo Gongyang comes not only from its simplicity but the plating, making dining here a rich visual experience. Only seasonal ingredients are used with the body’s needs in mind, while dishes are prepared with minimal seasoning. The best way to enjoy the food? Slowly and quietly, in quiet contemplation. Advance bookings are recommended.