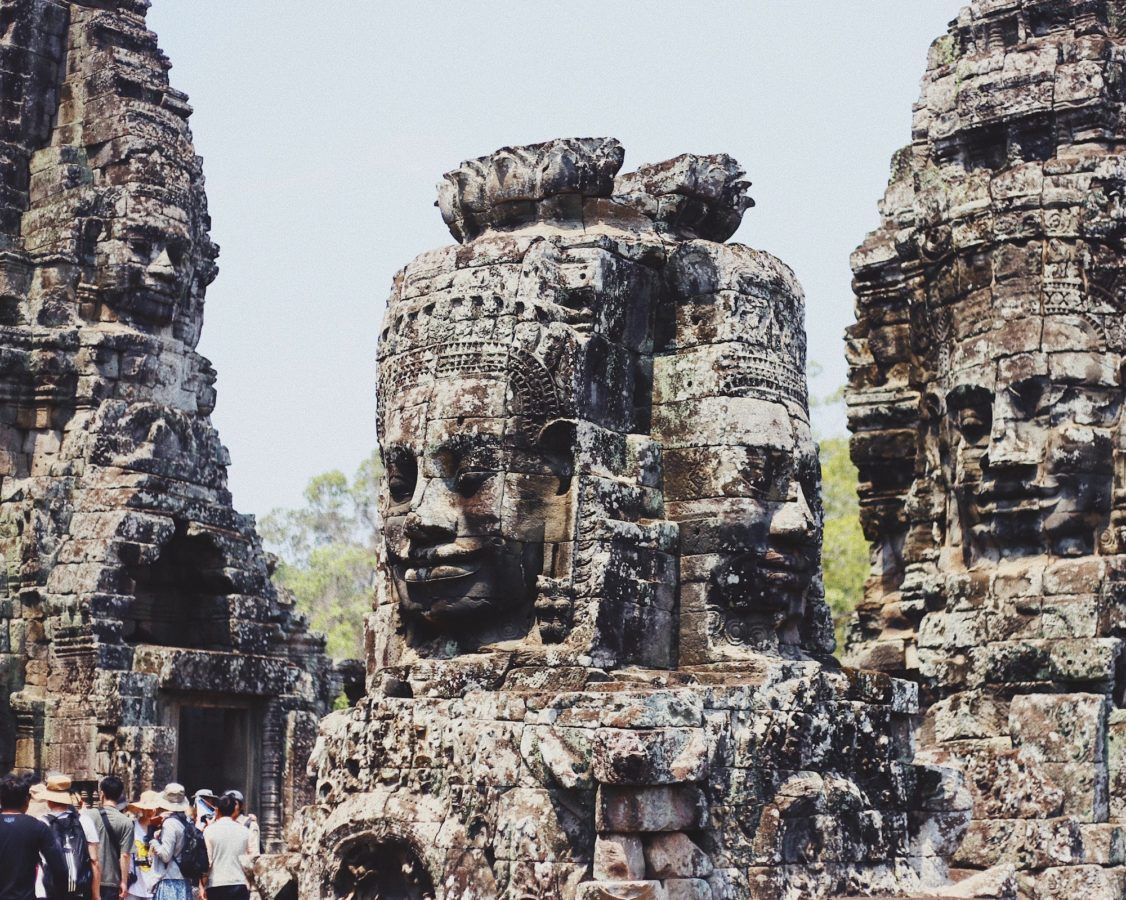 In 1994, nine young Cambodian men left a Khmer Rouge refugee camp and set up an association known as Phare Ponleu Selpak, in the northwestern city of Battambang. This association went on to establish schools providing education in art, music and theatre, and today the lessons continue, offering courses in visual, applied and performing arts. But by far its most famous offshoot is Phare, the Cambodian Circus, which has become the country’s most prominent public entertainment attraction.

This anarchic, big-top acrobatic extravaganza and its associated outlets – a boutique and cafe – may have been born out of tragedy, but today it represents hope, artistry and vitality in a secure country liberated from war. In the new century’s wave of socially conscious, largely home-grown organisations, which have since come to define Siem Reap, Phare was the ultimate trailblazer. Now a city icon, as well as its definitive social-enterprise model, the profits the circus generates go directly back into Phare Ponleu Selpak students’ development, or to schools and hospitals around the province.

While Siem Reap will eternally remain synonymous with the Angkorian temples on its doorstep, for the last two decades the city itself has managed to cultivate a rarefied profile among the travel community. Today this “temple town” is celebrated as much for its ravishing resorts, warm hospitality, boutiques and spa offerings, as it is for the thriving strain of responsible, environmentally conscious businesses based here; extending from handicrafts and catering, to hotels, fashion and even wildlife preservation. Ever since it became a globally renowned destination – just as the new millennium dawned – scores of creatively minded, socially conscious outfits have set up shop here, enhancing the lives of both community residents and travellers alike.

At SalaBaï Hotel and Restaurant School, free training in hospitality skills is provided for young, underprivileged Cambodians, while the Made in Cambodia Market is a centralised space enabling local craft artists to sell their wares. Likewise, initiatives such as Refill Not Landfill help improve sustainability and reduce waste, and community-minded boutique hotels like Rambutan Resort, Baby Elephant and Jaya House River Park invest in their staff by giving them fair wages, health insurance and professional development opportunities.

Following in the path of these progressive pioneers is the women’s weaving co-operative Manava (“humankind” in Sanskrit), which for five years has carried the torch of creative social enterprises from its manufacturing base in the village of Krobey Riel, just outside Siem Reap. Here, in a planned future partnership with an NGO, two dozen female artisans from low-income families fashion distinctive rattan goods – bags, baskets, jewellery, trays, place mats – which, in turn, helps them earn a respectable wage while empowering them through education in areas including financial management, family planning and healthcare.

While its credentials are flawless, what really stands out is the sustainability and streamlined elegance of Manava’s colourful products, many emblazoned with classical Khmer kbach decorative motifs. Company co-founder Ka-Lai Chan, from the Netherlands, has worked as a product designer and installation artist, and hones the company’s public image. When not coordinating with her artisans, customers or co- founder Baraing Tho, she maintains the company’s slick website and Instagram account, both of which highlight Manava’s rattan palm and willow grass designs (materials flourishing in the local countryside, and chosen for their flexibility, durability and accessibility).

Of course, in the crunch year of 2020, Siem Reap faced its sternest test yet. International travel slowed to a dismal trickle in the wake of the worldwide pandemic, and thousands of jobs were lost in the hospitality sector. Restaurants and hotels closed their doors, or simply vanished from view altogether. It was the toughest of times for David-Jaya Piot, whose parents – Angkor Village hotelier Olivier Piot and Tep Vattho, ex-director of urban development at management authority Apsara – were instrumental in building up the city’s tourism sector. Now, as president of the Cambodia Hotel Association Siem Reap chapter, and the managing director of Kulen Elephant Forest (KEF), Piot shoulders a double burden when it comes to keeping the local tourist industry alive.

The family’s ecotourism park, founded in 2019, is the modern successor to the Angkor Elephant Company, the former family business that tasked pachyderms with transporting tourists around Angkor Wat. When the practice of elephant riding fell from grace, due to increased awareness of the unethical treatment the beasts at these tourist attractions received, government bodies and Apsara helped them set up the sanctuary as a retirement home.

“They saw the writing on the wall for riding,” Piot says. “They were supportive of a positive change on the question of elephants in the Angkor park. Within a week [the government] were giving us documents to help us do whatever we needed. We set it up in no time.”

At this remote sanctuary in Prasat Bakong district, an hour’s drive from Siem Reap, 13 gentle giants have been unshackled from their chains and are now free to roam. Tours of KEF take in activities such as watching the elephants feed, observing them in their natural habitat, walking with them through the forest and seeing them noisily enjoy a bath in muddy water.

“We have this herd dynamic, a really strong friendship,” adds Piot. “They’re old colleagues, and they run and play, and have this society like very few other places have.”

Another enchanting, one-of-a-kind enterprise tucked away in rural Siem Reap is the 8ha Phum Baitang (“green village”) Resort which opened in 2015. It redefined the authentic resort experience, and was famously home to Angelina Jolie’s family while she directed the 2017 wartime drama First They Killed My Father. The key to its success lies in combining the rural simplicity of a bucolic, landscaped agricultural setting – complete with buffaloes and paddy fields – with ultra-sophisticated facilities that remain committed to an eco- friendly, community-minded ethos.

Phum Baitang prioritises the local population and environment by employing local rice farmers to harvest the crops, by sourcing food, laundry baskets and massage oils from nearby producers, and by growing its own organic produce. It also recycles cooking oil, runs an on-site facility for clean water production (with a bio-digester for used laundry water), preserves endangered plants, organises clean-ups around the resort and has banned motorised vehicles. For me, immersing myself for a weekend within the simple surroundings of farmhouses, coconut palms and lush gardens – far from the crowds of Pub Street – was an unforgettable, quintessentially Cambodian R&R experience.

Giving back via the arts is another way for individuals to contribute to the current Siem Reap renaissance, and the hyper-creative fashion of Madagascan émigré Eric Raisina, currently one of Cambodia’s most internationally renowned designers, is definitely putting this city on the style map. The high-street and hotel outlets of Eric Raisina Haute Texture display his flamboyant collections, while a tour of his multi-storey atelier reveals the African, European and Asian influences in his exotic, handmade creations. His apparel also showcases the skill of local craftsmen, who have revitalised the art of weaving luxurious Cambodian silk using multiple looms.

While Raisina has lived in Cambodia for two decades, Paris is his alma mater and fashion playground. An acolyte of the 1920s golden age of French haute couture, he studied at the Duperré School of Applied Arts and the Institut Français de la Mode. He has collaborated with such luminaries as Yves Saint Laurent and Christian Lacroix, and he still runs a boutique in the City of Lights which is just a stroll away from historic monuments such as Pont Neuf, the Notre-Dame and the Musée du Louvre.

Another local creative revolutionary who lived in France is Lim Muy Theam, the artistic force behind Theam’s Gallery. Having fled battle-scarred Takeo province in 1980, at age 11, Lim attended École Boulle and École des Beaux-Arts in Paris. He returned to Cambodia in 1994 and embarked on a countrywide survey of Khmer art and culture – in homes, temples and pagodas – where he uncovered the country’s lost artistic heritage. After teaching apprentice artists traditional Khmer craftsmanship and becoming artistic director at Artisans Angkor, he established Theam’s Gallery, a repository for his own artistic creations which, over time, evolved into a tranquil retreat wrapped around a tropical garden.

Renowned as one of Asia’s most inviting exhibition spaces, his acclaimed gallery recently celebrated its milestone 10th anniversary. To this day the space – with its workshops, store, and multiple showrooms displaying paintings, sculpture and musical instruments – stands as a testament to a man whose life story is every bit as extraordinary as his art. By restoring Khmer cultural traditions and passing them down to new generations, while at the same time bridging classical and contemporary styles in blazing colour through his own art, Lim is a standard- bearer for the city’s creative community movement.