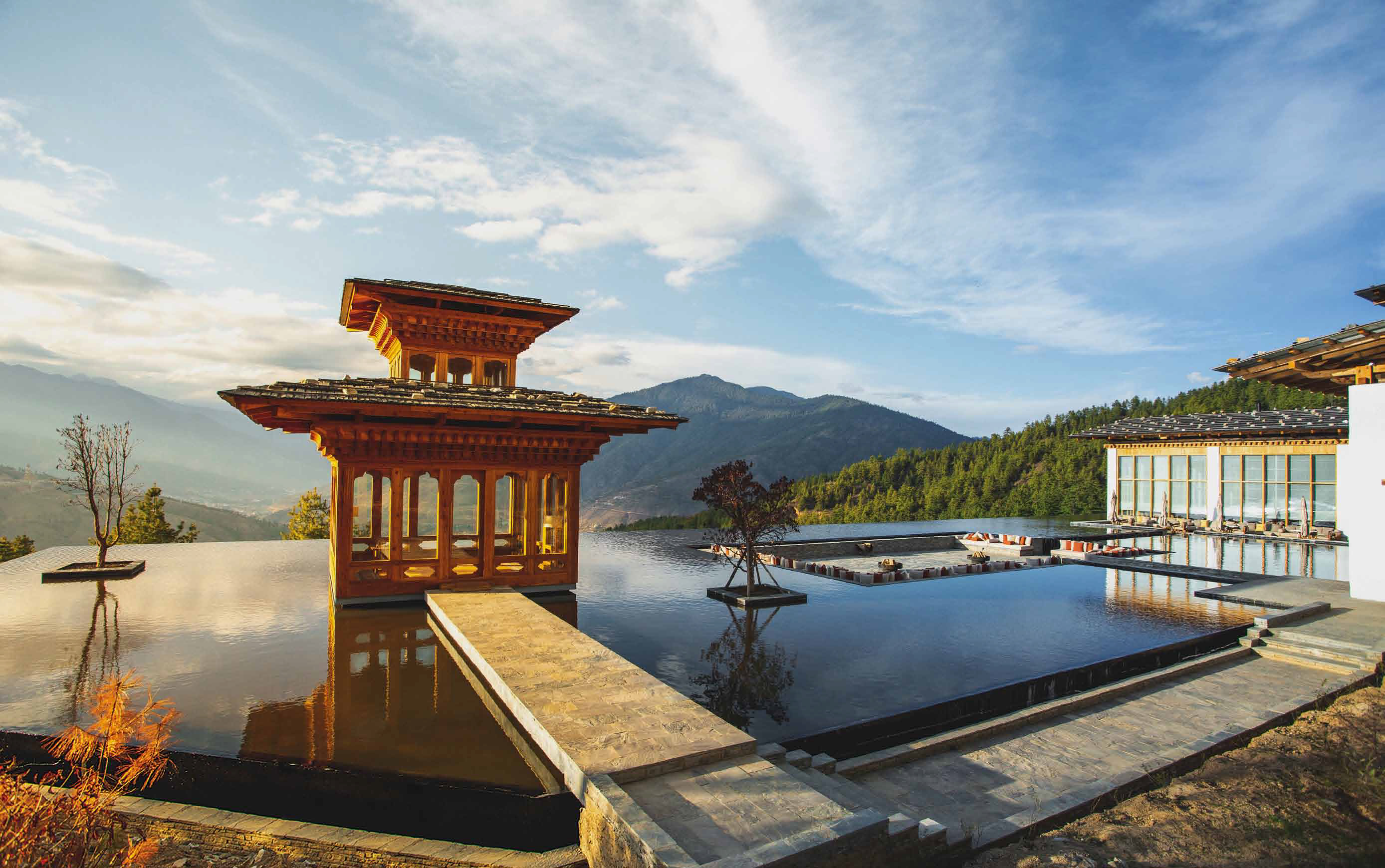 Travel
Marlene Tan
Sign up to get the latest luxury and lifestyle news delivered to your inbox.

Luxury travel may seem at odds with having an immersive experience in the developing nation but it may be the best way to connect to both an ancient kingdom and a modernising society, as Marlene Tan discovers.

Khedrupchen Rinpoche Ugyen Tenzin Thinley Lhendup (Khedrupchen Rinpoche) is a modern-day rinpoche. Instead of reading from a book of scriptures, he is reciting sutras from a tablet as he blesses a line of guests and villagers with sickles or babies at their hips. As soon as the latter heard about the blessing, they stopped what they were doing and turned up. The Bhutanese believe in the powers of such a blessing, especially if it’s bestowed by a rinpoche reincarnate. Thirty-year-old Khedrupchen Rinpoche was discovered to be the fifth reincarnation of Khedrup Jigme Kundrol, a respected Buddhist teacher and monk, when he was eight.

Druk Asia, a Bhutan travel specialist that has put together my trip, has arranged for me to meet Khedrupchen Rinpoche at Gangtey, a picturesque valley dotted with marshlands, potato farms and blue pine forests 3,000m above sea level, four hours away from the capital of Thimphu by car. I have wanted to learn what Buddhism means to a population known for religious piety and if it has anything to do with the Bhutanese formula for happiness. After all, Bhutan is famously known as the happy kingdom.

Emerald panoramas fringed with snow-capped Himalayan peaks, postcard-perfect fortresses and towns peopled with the most disarmingly charming folk beckon tourists to Bhutan.
Landlocked between India and Tibet, and never been colonised, Bhutan marches to its own drumbeat. It is a country like no other.

Its proud people believe in magical penises that can slay monsters and turn into propellers for transporting one across the country. The most famous of these magical appendages is Drukpa Kunley’s. The legendary monk’s member is enshrined in lurid paintings on the walls of many houses, while many pray to him for fertility at Chimi Lhakhang, a temple in Punakha.

In this country, it is also possible to build 108 temples overnight – if you were to believe the story that Tibetan King Songtsen Gampo built these temples in Tibet and Bhutan to subdue a demoness disrupting the spread of Buddhism. While the majority of these temples are in Tibet, two of them are in Bhutan: the Kyichu Lhakhang in Paro and Jambay Lhakhang in Bumthang; also the oldest temples in the country.

Bhutan is steeped in ancient myths that bind its history to the present, but it is also more forward-thinking than many developed nations in some ways. While others have only just started to advocate mental welfare at a national level, Bhutan began in 1972 when Jigme Singye Wangchuck, the fourth king of Bhutan came up with the concept of Gross National Happiness (GNH). While the developed world is just getting serious about going green, Bhutan’s forest cover is already at 72 per cent, making it the world’s only carbon-neutral country. Last June, the Lower House voted to repeal sections of the Penal Code, kick-starting a parliamentary process to decriminalise homosexuality. In this densely forested and mountainous terrain, one can count on having 4G connection even in remote areas. So instead of carrying scriptural texts with him, Khedrupchen Rinpoche has “everything” in his tablet, since he says: “We are living in the 21st century.” While wellness, balance and mindfulness are elusive goals for many in more advanced countries, the Bhutanese have these concepts well incorporated into their simple, daily lives, as evidenced by the contented smiles on many.

If all these together make Bhutan sound like a dichotomy that stretches the imagination, one should check into the newly opened Six Senses Bhutan to see how it all plays out. Which is what I did last June.

Before booking my stay in the lap of luxury, I questioned myself if in doing so, I would still be able to connect to a country where many (outside Thimphu) live in impoverished homes built from rammed earth. Fortunately, my worries prove to be unfounded. My combined experiences at three of the five Six Senses lodges I stay at – in Thimphu, Punakha and Paro (Gangtey opened in October and Bumthang opens only this month) give me a good insight into a country at the cusp of change (while I don’t have to compromise on comfort).

Six Senses is not the first to open lodges on the tourist circuit linking five main valleys in western and central Bhutan but it has gone one up on Aman, the first luxury brand to do so. While all Aman lodges in Bhutan look the same, the design of each Six Senses lodge is different. Each reflects the unique character of its location (even if all are built in vernacular architecture as is required by Bhutan’s building regulations).

Taking inspiration from the grand Thimphu dzong (fortress) which houses the king’s administrative offices, the Thimphu lodge incorporates heavenly motifs such as swirling clouds into its design, earning it the nickname of “palace in the sky”. The Punakha lodge takes cues from the terraced rice fields of the valley. Its walls are painted in a golden hue like the colour of rice stalks in the sun. As a nod to Punakha’s famous cantilevered bridge, the reception building is suspended over the pool. At Paro, home to the iconic cliff-side monastery of Tiger’s Nest, the lodge is constructed with hand-cut rocks and finished such that its facade resembles ruins – very appropriate since it is next door to a 15th-century dzong’s stone ruins. Inside the suites at each lodge, mod cons are available alongside a traditional bukhari stove.

At each lodge, the wellness programmes are headlined by signature spa treatments. Though the treatments here are probably elevated versions of local ones – think polished wood tubs for hot-stone baths at Thimphu that are large enough for two, a guided meditation walk followed by a massage in Punakha, or a four-hands foot massage at Paro after climbing the iconic Tiger’s Nest – they serve the same objective of relaxing one’s body and mind. After all, one needs to be in a blissed-out state in order to receive the spiritual awakenings that one seeks in Bhutan.

One With Mother Nature

As with all Six Senses properties, the scale of environmental practices at the Bhutan lodges is impressive. Each has its own reverse-osmosis plant and water refinery, while produce is grown in-house as much as possible. Overseen by lodge manager and country food and beverage manager Roy Todemann, the Paro lodge is spearheadng a project to cultivate and introduce superfoods such as kale and quinoa to the Bhutanese diet, and more. While showing me around the sprawling farming plots which he lovingly calls “Bhutanical Paradise”, Roy tells me about plans to plant 10,000 trees in a year by 2030.

Because Six Senses is in the position to make a difference, each lodge has its own community project – an “adopted” monastery where staff volunteer time to help with maintenance works, gardening and educating the monks in sustainable living. The staff say they are happy to help, and feel delight when they see the fruit of their labour. Naturally, a friendship usually develops such that the monastery welcomes Six Senses guests too. At Chorten Ningpo, guests may have breakfast with the young monks. Often moved by these experiences, guests donate money to the monastery, creating ripples of goodwill, making all involved happy.

It is often through interactions with locals that one feels the soul of the country. As a solo traveller, I chat a lot with the staff who are a mix of experienced workers who have been employed in resorts in Asia or fresh graduates from hospitality schools. All are happy to work for a global brand, while some hope for a chance to travel and work in an offshore branch in the future.

One nippy evening at Punakha, I let Lungten, my 22-year-old guest experience maker, GEM – as Six Senses calls them – wait a full 15 minutes outside my suite without knowing. Instead of letting slip just a tinge of displeasure (as many young people these days are wont to do), she maintains her smiley disposition. This is even as she carries two umbrellas on a two-hour hike through rice fields to Chorten Ningpo – on the off-chance of rain. When asked about how she feels (lugging those unwieldy things as we climb uphill), Lungten who was picked out of many applicants for the position, tells me cheerfully: “I am very grateful to be here.” So am I.

Greece to Reopen Tourism and International Flights from 15 June Progressively

Take a Virtual Tour of These Architectural Landmarks

Iceland Plans to Reopen its Borders to Travellers in June

#PrestigeBucketList: 10 Travel Destinations to Dream of Visiting Next