It can be hard to truly wind down when you’re living in a country that also happens to be a bustling metropolis, but once in a while a lush, green oasis presents itself to provide the escape you could only dream about having.

Better yet, this oasis won’t even require you to leave the city, especially with the raging pandemic worldwide. Called the Parkroyal Collection Pickering, the sprawling architecture — situated right smack in the Central Business District — is a strong juxtaposition against the buildings that surround it, even though it’s a superstructure itself. As Asia’s Leading Green Hotel for the sixth consecutive year, the eco-chic establishment’s unique hotel-in-a-garden proposition has gained international fame as a landmark celebrating sustainability and nature, and being an exemplary vision of what new urban developments can and should look like.

With travel at a standstill, there are few other places that could transport you to another world like this hotel can. We had a go at the ultimate Parkroyal Collection experience during our staycation there, here’s what it’s like. Walking to your room for the first time is quite an experience, for instead of dimly-lit, air-conditioned corridors, you’ll get an alfresco experience with plenty of fauna and streams of running water. The doors leading to the rooms are also decked out in wood and lend the impression of entering a tropical treehouse.

The Collection Lifestyle Room that we stayed in is an average-sized 28 to 32 square-metre room with a king-sized bed, an executive work area, and couch for lounging. Expect even more greenery if you’re assigned a room on a floor that coincides with the tiered gardens, otherwise you’ll get a spectacular view of the city.

The rooms adopts a partially open concept, so while the bathtub and sink are in complete view of the desk, the rest of the bathroom is tucked away into the corner. In keeping with the idea of nature and restfulness, the interiors are kept minimal with plenty of wood accents. If you want to splurge, the Parkroyal Collection Suite is a swanky 166 square-metre option that’s perched on the building’s highest floor with 180-degree views of Singapore’s skyline.

Sitting at the crossroads between Raffles Place, Boat Quay and the Singapore’s vibrant Chinatown means that there is no lack of activities and places to explore around the area. But if you’re adamant on shutting down from the rest of civilisation, the hotel has plenty of activities worth checking out too. 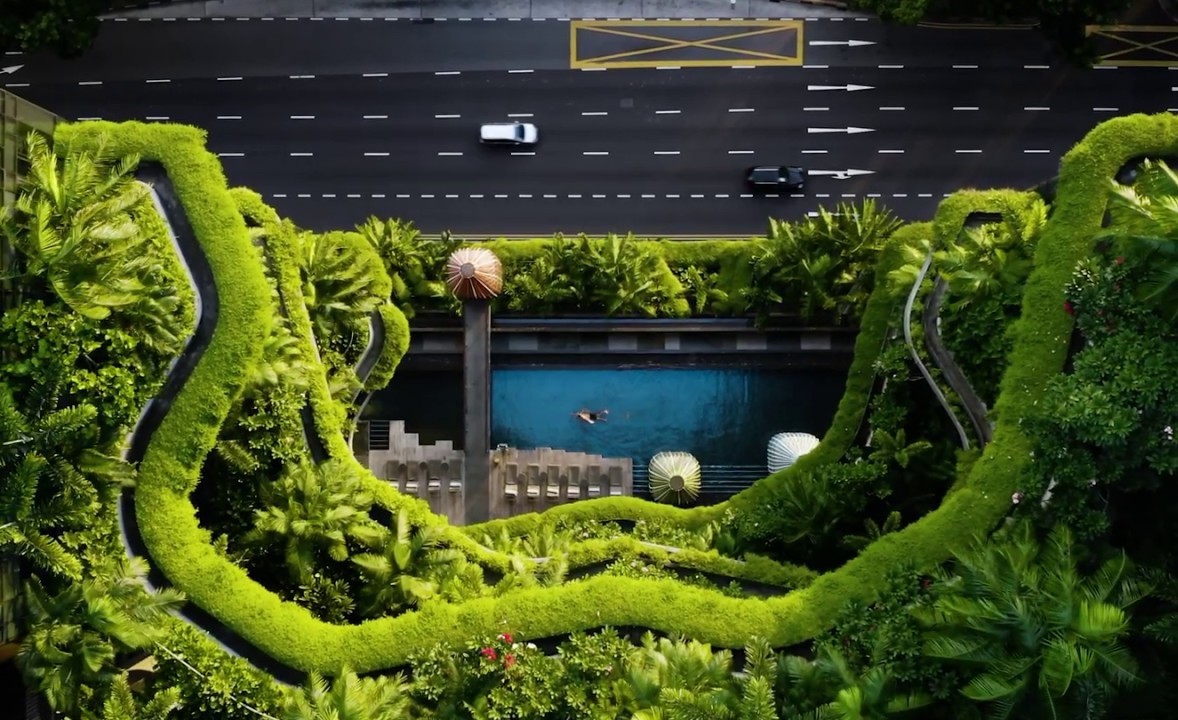 Daily activities such as the Garden Tour sees in-house ambassadors take you through the Parkroyal Collection Pickering’s famous greenery, starting from its top floor. There, you’ll learn that its collective garden space is actually the equivalent of Hong Lim Park downstairs, and that the tiered design collects rainwater to sustain the greenery. Other activities include the mixology and cooking classes at Lime Bar and Lime respectively, and a Poolside Snack Surprise at the infinity pool daily, which sees a generous number of daybeds to lounge at with views of the city. If it’s a serious tan you’re after, mornings are your best bet; you’ll lose most of the sun by mid-afternoon due to its position. As with most hotels now, the pool (and gym) will require booking beforehand to manage social distancing. Book any of the Collection rooms and you’ll also get access to the Collection Club Lounge at level 16. Besides champagne breakfast, you’ll also enjoy complimentary afternoon tea and evening cocktails during your stay there. The latter also offers small bites (that change daily) and cheese platters, making it the perfect pre-dinner affair. Designed to take you on a diverse culinary journey, the Lime Restaurant’s generous buffet menu sees favourites such as the Lime Signature Claypot Barramundi Fish, Pickering Lobster Laksa, and Wagyu Beef Prime Ribs. To get guests into the festive spirit however, the restaurant has also included a special menu that sees roasted turkey (done three ways), a honey and citrus glazed ham, and mini yule logs for a feast you won’t forget with friends and family.

Style
By Stephanie Ip
Sign up to get the latest luxury and lifestyle news delivered to your inbox.
Shatricia Nair
hotels resorts

The World of Takashi Murakami at Grand Hyatt Tokyo