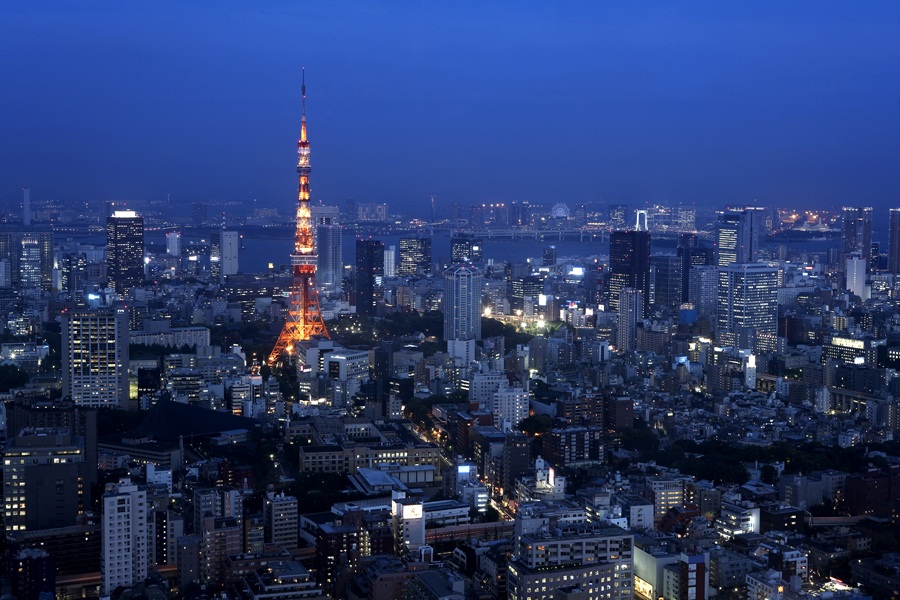 I am sitting 53 storeys above the glittering lights of Tokyo’s Roppongi District while a French mixologist pours what has to be the best Negroni I have ever had in my life. In the background, a jazz crooner sings softly while fashionably dressed couples from all over the world speak in a low murmur. A group of Japanese businessmen are gathered in the corner over an aged bottle of Hibiki whisky. Though some hotel bars can be lifeless, stilted affairs, this is the sort of place where locals come back again and again. In the corner, I see a cabinet stocked with private bottles of some of the world’s most rare and valuable whiskies and whiskeys, emblazoned with the names of their owners.

“Most people won’t bother with this,” the bartender tells me. With a wink and a flourish, he pours the contents of my tipple from high in the air into the glass and back again. Though I’d be too timid to attempt the feat on my own, throwing the classic cocktail like this adds more than mere theatricality. It aerates it and opens up the aromatic botanical notes in the gin without diluting it the way a stint in a cocktail shaker would. “But they should.”

Such fanatical attention to detail is typical of both the Japanese capital itself and The Ritz-Carlton, Tokyo, the spectacular five-star cocoon in which I have ensconced myself. One of the most iconic hotels in the city, the storied haven enjoys an enviable perch on top of Midtown Tokyo, a fashionable shopping centre where customers peruse silken scarves, designer bags, and handmade Washi paper. While the hotel itself has always been a bastion of tasteful minimalism, a full refurbishment of rooms and suites in honour of its 10th anniversary in 2017 has restored some of the lustre that had faded over the years.

From the spacious rooms decked out in warm neutrals to the lavish ikebana floral arrangements in the lobby to the two Michelin-star restaurants, the place is a flawless study in urban luxury. Smiling, kimono-clad staff, who glide past as silently as ghosts, seem to possess a supernatural ability to sense a guest’s every whim.

There has never been a better time to bask in the supreme pleasures of this grande dame, nor has there been a better time to experience the Japanese capital. Tokyo has always been a place of exquisite taste with an affinity for the finer things in life. This year, the city boasts a whopping 226 Michelin stars – that’s 132 more than Paris – and shoppers in ritzy Ginza barely blink an eye at dropping hundreds of US dollars for the finest toro, Kobe beef and produce in the world.

A ¥10,000 (US$110) bowl of ramen became so popular here that diners need to reserve three days in advance. While in other cities such an extravagance might be a mere publicity stunt, in Tokyo it was executed with such technical finesse and high-quality ingredients that the wait for reservations quickly rose to several days.

Now, the ever-mounting buzz for the 2020 Olympics has given this already vibrant city an additional jolt of adrenaline. Swish new hotels like The Tokyo Edition are in the pipeline, while classics like The Ritz-Carlton, Tokyo are already booked out for the games.

“Tokyo is so much more than sushi and anime. It’s the city of the ultimate niche. Whatever your interest, you can find the finest and most extreme version of it in Tokyo. Dedication to quality and perfection is palpable in every aspect of life,” Joy Voeth tells me later over a flute of Champagne. A jazz singer with a magnetic smile framed by a mop of cinnamon-coloured curls, Voeth meets me at another of the city’s iconic hotel bars. She has the enviable job of singing at some of the world’s best hotel bars, including the Mandarin Oriental Bangkok and, yes, the place at the Park Hyatt Tokyo where Bill Murray first locked eyes with Scarlett Johansson in Sofia Coppola’s Lost in Translation. Voeth has travelled the globe, but loves few cities as fiercely as this one. “If you allow it, Tokyo will surprise and delight you in endless ways… and trust me, after this city, you’ll never be satisfied with a California roll again.”

After sprinting a dozen blocks through the whirl of Tokyo’s chic Ginza district, I find myself flustered, frantic and on the verge of despair. Punctuality is a virtue in this town and its opposite is seldom tolerated, especially by elite omakase temples like the one I’m hopelessly struggling to locate on Google Maps. Jiro Ono, the triple-Michelin-star protagonist of Jiro Dreams of Sushi, is notorious for refusing to serve diners who arrive five minutes late and refusing to refund their US$300 meal. I can only hope my host is more forgiving, because I am already five minutes late.

I find myself feeling increasingly heartbroken wandering through the miniscule alleyways that look nothing like the ones on my map. It’s not the fact that I’m out tens of thousands of yen; it’s the fact that Sushi-Ya is the star showcase for prodigy Takao Ishiyama. Only 28 years old, the rapidly rising chef has already trained at the triple Michelin-starred Sushi Saito and earned such acclaim among local foodies that his own venture is booked out for months.

When approaching the daunting task of deciding where to eat in Tokyo, I spoke with Yukari Sakamoto, the author of Food Sake Tokyo, as well as a chef, sommelier, and shōchū advisor. Both she and her husband Shinji, a former buyer at the legendary Tsukiji Market, have made careers out of seeking out the finest food in the city.

“Tokyo is filled with restaurants that specialise in single dishes where chefs work their whole lives perfecting one cuisine,” Sakamoto says. “In Japan we have the concept of shokunin, where artists specialise in one thing and doing it to the best that they can.”

I cannot imagine a place that better exemplifies such dedication to a single culinary art that my intended dinner destination. Unwilling to give up hope just yet, I keep asking every passerby, “Sumimasen, Sushi-Ya wa doko desu ka?” Since the phrase literally means, “Excuse me, where is the sushi restaurant?” I receive nothing but bewildered stares in return. Finally, an elderly man and his daughter whip out their phones to aid a sweaty, disheveled gaijin in distress. Valiantly, the pair reassure me through the language barrier and call the restaurant until a gorgeous woman in a deep violet kimono dashes out. Half the street is watching by now and erupts in a cheer.

“Daijobu desu,” the woman says warmly, It’s all right. I thank my good samaritans profusely and she ushers me into a blonde wood space where the other diners have already gathered from all corners of the globe. Some, like the Hong Kong power couple behind a wildly successful internet startup, are regulars, while others, like the avid American foodie who just quit her job to travel the world, are here for the first time. Unlike Jiro or his master Saito, Takao is inviting, offering us one-word English explanations for dishes and even cracking an occasional half-smile.

He’s no less serious about his craft, though, and what unfolds over the next three hours may well be one of the most indulgent meals of my life. After he forms each perfect nigiri with his hands, it seems to sigh onto the plate as the buttery seafood slumps into its final resting position. Flame-coloured tongues of uni materialise more than once, as does otoro so richly marbled it resembles a Wagyu steak. Conversation comes to a halt and eyes pop each time a diner tries some new marvel. By the end of this vast parade of bite-sized wonders, we’re all in a blissful state that borders on transcendent.

Equally splendid and certainly easier to find is Azure 45, the Michelin-star directly overlooking the Tokyo Tower at The Ritz-Carlton, Tokyo, where chef Shintaro Miyazaki combines classical French culinary techniques with the finest ingredients the Japanese countryside has to offer.

A stickler for perfection, he insists on personally travelling straight to the source. For seafood, he tends to visit Yamaguchi Prefecture to seek out the very best.

“Both the French and the Japanese love their cuisines and they’re both very strict about how it is presented,” he tells me. Such fastidiousness plays out on the plate in cuisine that resembles edible miniature landscapes.

Even the bread course, a rustic hunk of superb sourdough served aside of molded turret of salted butter that tastes of grass and sunshine, is a quiet meditation on perfection. “The first sight of the cuisine is like a first impression, so the visual has a huge impact on your impression of it.”

Shop ‘Til You Drop

There’s no mistaking the polka-dotted orbs hanging from the ceiling. Although I may have missed Yayoi Kusama’s recent exhibition at The National Art Center Tokyo, the famously eccentric artist has an installation in town on display for those who know where to look. While one might assume that such a prized piece of work would reside in a museum, this surreal creation exists instead in a department store.

To be fair, the new and highly anticipated Ginza Six is no ordinary department store. In a city that already offers every conceivable form of luxury goods, this superlative spot takes consumerism to positively hedonistic levels. With a carefully curated selection of 241 brands everything you could ever want is for sale here, along with a few things you probably never knew existed.

“Luxury means seasonal ingredients at the peak of their season. It doesn’t have to be an expensive or long-course meal. A simple dish, but done with the best ingredients, can be luxurious,” Sakamoto advises me. “Also, the Japanese department stores have basement food floors which offer many “luxury” food items. Belgian chocolates, French macarons, a colourful bento box from a Kyoto kaiseki Michelin-star chef, and handmade wagashi (Japanese confectionaries). These are all luxurious.”

Therein lies the secret to what makes this mad, marvelous city feel so indulgent and so captivating. The pursuit of this small luxuries, of craftsmanship that borders on obsession, pervades almost every facet of life. I understand how, more than a decade ago, Scarlett Johansson’s character could have felt lost in the dizzying delirium of it all, even as real-life director Sofia Coppola expressed an endless fascination with this seductive city.