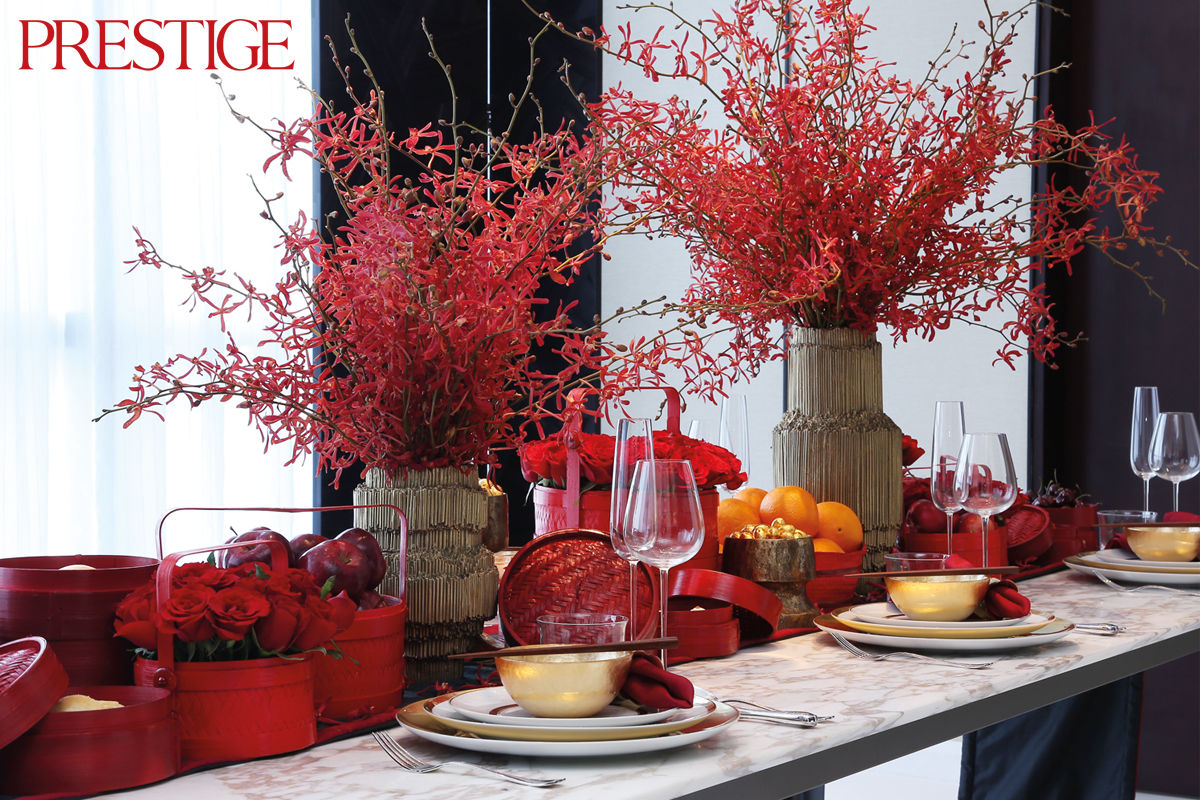 Prestige marks the Year of the Pig by inviting interior designer kezia karin to create a superb Chinese New Year table setting in collaboration with Prodotti Indonesia and Casa Domaine.

“Red colour is identified with Chinese New Year as it symbolises the energetic spirit like fire,” says Kezia, whose past projects include Padma Hotel Bandung, Corpus Equity Jakarta and Maystar Restaurant in Surabaya.

“People believe that red brings luck, happiness, vitality and fertility, as it also represents the spring season and the southern direction. New Year is a time when all the family gather and spend time together. It’s a time for reunions.

Using a table and chairs from Flexform, a family business based in Brianza in Northern Italy that has worked with leading designers like Joe Colombo, Asnago-Vender, Cini Boeri, Rodolfo Bonetto and Antonio Citterio, Kezia created her setting in Casa Domaine’s magnificent showroom on Jl. Kh. Mas Mansyur.

For her centrepiece, she chose a Paglia Vase by Alexander Lamont with Red James Story orchids. A Bangkok-based designer, Lamont created a set of three vases built of layered straw and cast in solid brass. The inspiration was the cut straw of the roofs of houses where he grew up. Thatchers would spend weeks up on the roof cutting, shuffling and stepping bundles of straw, until finally a beautiful golden roof was revealed. “I picked the vase because its gold colour represents the richness of nobility,” Kezia says.

Another of the pieces she selected was a Melogranoblu Perfume Sphere Lamp, “since it has a unique shape. The lamp body projects the light vertically through the glass. The distance between the light source and glass creates a different lighting effect.”

Among other highlights of the table setting were bronze textured Crucible Candleholders by Alexander Lamont (smooth reflective dishes hold naked flames within deeply textured bronze table sculptures) and Vista Alegre tableware and glassware, a century-old Portuguese brand whose designs are used in Europe on grand occasions.