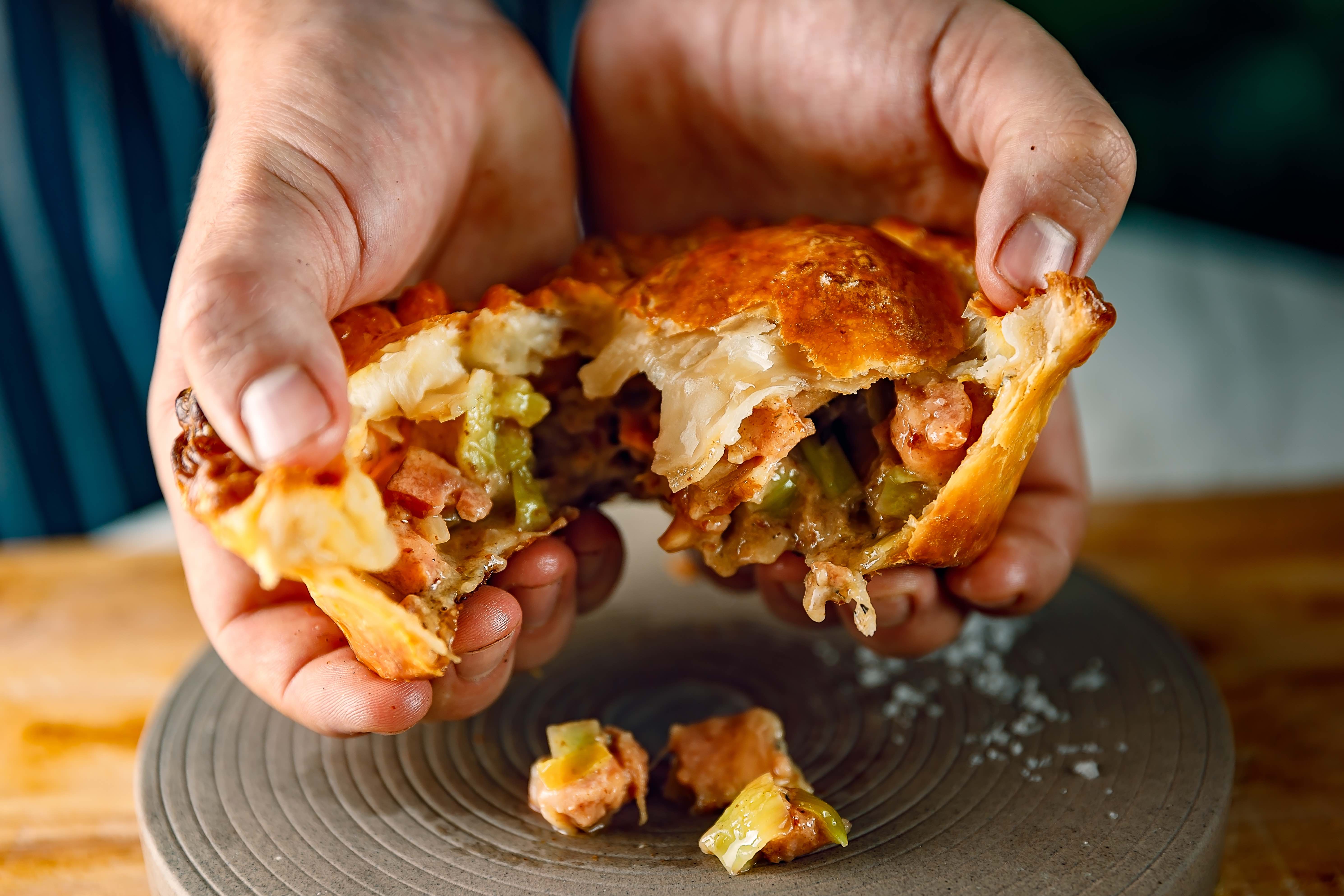 Formerly a chef at Noma chef and Tom Aikens’ protégé, James Sharman started a culinary pop-up project called One Star House Party that took him and his team around the world. During the global tour, the British chef cooked in as many as 20 different countries — including some rather obscure locations — racking up interesting experiences along the way.

Returning to Hong Kong, Sharman recently launched a new British restaurant and comfort food concept in Causeway Bay’s Lee Garden Two. It’s situated inside the family members’ club Maggie & Rose which closes in the evening and transforms into The Leah. With the kids gone for the day, the restaurant is open to the public and accessible through a dedicated entrance that leads to an expansive terrace and outdoor bar. We took the chance to meet the man himself to learn more about the new restaurant and his culinary adventures.

Can you tell us a bit more about The Leah?

How did you come up with this concept?

The premise of the restaurant is the house that I used to live in: a 9-bedroom house in Battersea, where most of us worked at different Michelin-star restaurants. [The restaurants] would close on Sundays, so we’d have days off and on Saturday night. We’d finish work and have ingredients from our sections left over, things you can’t really get at a supermarket, like bits of bone marrow or foie gras. We would put together the bits and cook our own version of comfort food. We came up with things that are simple and not technically challenging, but really nice. I mean, no other scenario would force you to create things like bone marrow gnocchi.

I’ve done a lot of fine dining, but I don’t think my skillset is that fine dining anymore. I would say that 90% of my repertoire has nothing to do with all the restaurants that I worked and trained in. I’ve just found more satisfaction elsewhere. Saddled up on a Vietnamese fishing boat with 30 blokes picking up little fishes to steam, which we eat with rice and everybody’s wives had made them their own bottle of fish sauce. I remember stuff like that way more than a 20-course tasting menu. That’s the kind of stuff that hits home and affects my cooking.

How would you describe your own cuisine then?

I try not to be known for a type of cuisine. I don’t want to commit to one and then you’re in a cage you can’t break out of. It’d be sad If I said “OK, I do British food”, and then lose the ability to roast spices in ghee. You lose so much like that. I’d say it’s based more on my experiences.

So what did you learn from your experiences with One Star House Party?

All sorts. When we were planning to open a restaurant in Beijing, we really needed to discover as much as we could about China. We really wanted to get to grips with Sichuan [peppers]. We didn’t get why there was so much energy around this ingredient. So, we looked into the area where Sichuan peppers grow, which is huge but incredibly remote. Then we figured out that a really good way to meet people in advance was to use [the popular dating app] Tinder. We were all trying to find people within the location that we found Sichuan was growing. So one of the chefs met a girl and asked if we could come visit. So we rocked up — it’s a five-hour drive from Chengdu and then a 45-minute hike up to the house.

But when we got up there, the girl’s dad was absolutely furious. In the end, he let us stay (for nearly 2 weeks) and allowed us to sleep with the staff on the condition that we worked with them. It was harvest season so we were picking peppers for days and days, but this is where we really fell in love with the whole plant and tree. The dishes that we put together used the wood, the leaves, and the berries. You may think of Sichuan pepper as a spice or a sensation, but it’s much more. The fresh berry, for example, is a fruit!

I heard that you also cooked on Mount Everest, what was that like?

There’re only a few thousand people that live above the 4,000-metre threshold (base camp is a little higher than 5,000 metres). You can’t take water buffalo or donkeys up there, so that really changes the cuisine. They can grow some vegetation, but the real struggle was getting fuel up there, so cooking was challenging.
We met a family of four there. And it’s funny because they had everyday parent struggles too because they couldn’t get their kids to eat vegetables. The dad would bury lots of little pumpkins in the snow. Then he would get it, thaw it out by the fireplace and cut it open. He’d add a bit of salt and sugar, give the kids a spoon and they loved it! And all without fuel. That’s such a useful technique where you can flash freeze your vegetables and effectively cook it.

When did you know that you wanted to be a chef?

I moved out when I was 15, but continued school until I was 18. So I was doing my A-Levels during the day and working at restaurants in the evenings and on weekends. It was weird because I would be in the kitchen worrying about coursework, and then in the classroom worrying about if I had enough prep on my section.
But the first restaurant I worked in, I just needed a job. Then I went to London and worked for [Tom] Aikens. Stepping into that kitchen was the most wild and ruthless environment that I’ve ever been in — far crazier than any kitchen I’ve ever heard of. It was a good year or two of suffering. But once you got through that, it became rewarding and that’s when I fell in love. Not just for the food, but the way it makes you feel. The subculture of being in the kitchen — that lifestyle is what you fall in love with first.

So, what’s your relationship with Tom Aikens like now?

I went to his wedding (which was fantastic!) and I speak to him most days still. He’s been a massive part of my life: a supportive and also quite ruthless figure, which is what I needed back then. He’s a really great guy and I think his technique surpasses any other chef I’ve seen. He’s just genetically born to do this.

I read that you even slept in his kitchen!

Yes, when I moved to London, I was working for free in the beginning, which you had to do until you could got the job. So you’d clean down and keep yourself to yourself and then hide. You could get a night’s kip and then the next day it looks like you’re the first one in!

Any plans for more culinary adventures in the future?

We’re going to travel a bit. We’re looking to do another project actually — an ambitious one. The idea is to sail from Hong Kong to London, but we’ll let you know more when the time comes!