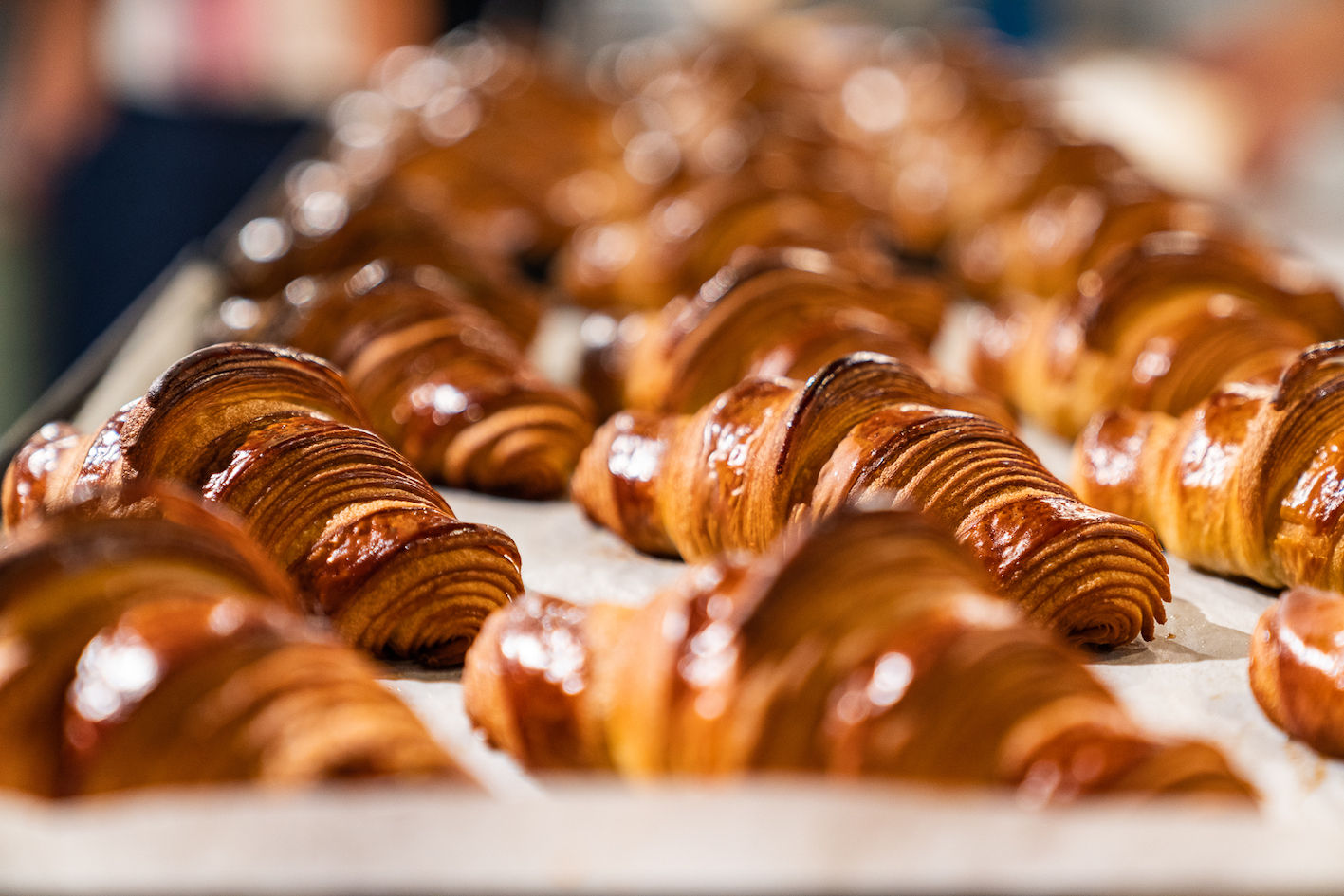 Gontran Cherrier is a French baker who wears many hats: pastry chef, TV show host, cookbook author and businessman. But of course he’s not wearing any hats in reality, because it’d be a shame to mess up that perfectly tousled brown hair of his. Fondly nicknamed the ‘Brad Pitt of the baking world’, he’s the sort of baker that has fans who sigh longingly while watching him roll croissants for hours. And I’m not just talking about staring at his boyish good looks, I’m talking about that croissant — with its crispy, golden shell revealing creamy, butter-scented layers of pillowy soft pastry — that people willingly queue for.

A fourth-generation baker with experience alongside French chef Alain Passard of three-Michelin-starred L’Arpège and the late Alain Senderens’ Lucas Carton, Cherrier has taken his artisan boulangerie empire across the world, with outposts in France, Australia, America, South Korea, Japan, Taiwan, China, Thailand and now, Hong Kong. It’s his 57th bakery to open, and it’s located on the B2 basement floor of the cultural-retail emporium that is K11 Musea. It’s a big project, too, with an all-day restaurant, café, retail bake shop and bakery production section in the new mall.

So how does Cherrier do it all? We met him at his new bakery to find out and yes, came away with many croissants. Bon appétit!

In your own words, how would you describe your baking?

Family style. I’m a fourth-generation baker and in the beginning, I learnt how to bake from my father. When I grew up, I spent a lot of time in my grandparents’ bakery. So I get a lot of inspiration from those memories with them. I also really like to use traditional items, a French pastry or bread, and then mix it up with flavours from overseas, like matcha, or even miso [which he uses in his specialty miso rye bread]. I will identify a popular flavour in that country and try to combine them — make a bridge between the two countries and the two flavours.

Sometimes, I will also make special items: a traditional national pastry and then add a little French touch. For example in Japan, I made melon pan [a sweet Japanese melon-like bun] and added my [French] touch. So that’s the other way around. But I really need to spend a lot of time in the country to understand. And then step by step, I can extend my range like this.

So other than your family, who else has inspired you in your baking?

I would say Pierre Hermé. We’ve known each other for some time and when I opened my shops, he came to visit. He is a really great master for me, so I get a lot of inspiration from him, too. Even when I was young, he inspired me. When I was maybe 16 years old, I discovered his work through Ladurée [who are known for their macarons] so it was quite a few years back.

What is your favourite bread or pastry?

My favourite bread is a traditional French baguette. I also really like sourdough. As for pastry, my favourite is a plain croissant. For me, that’s the best because I love eating it with a coffee. That’s the best pairing in my opinion.

How do you make a good croissant?

Get good ingredients. The raw materials are important. You need to select a good butter to get a good fermentation and a good bake. A good croissant has crispiness — a very crunchy outside and soft inside. To get that, you need quality flour, too. On top of that is the perfect baking time and temperature — it’s not about the oven, though. In fact the most important thing is skill. I have many shops around the world and in some of them, I have different ovens, so we need to adapt to whichever oven we’re using.

I know exactly what I want in terms of consistency, texture and appearance, so my team and I adapt to achieve that. Sometimes, it’s difficult and takes a long time. The hardest place to do that was Australia actually. I don’t know why! But it took us a long time to adapt.

Why do you love baking so much?

It’s my life. I like touching flour, touching the dough. I also really like to eat bread and croissants. It’s as simple as that.

Why did it take you this long to come to Hong Kong?

I wanted a good partnership with someone in Hong Kong, and it was very difficult to find. With K11, we had a really good opportunity and the project is amazing. To have something like this, with the four different sections, is amazing.

Have you come across any challenges yet?

Finding the right orientation of the different sections is difficult [right now]. And the explanation needs work. We need to explain to our customers so they understand where to go for what. You need to go there [to the retail bake shop] to get your breads, or there [the café] for your coffee and pastries, or there [the restaurant] for your lunch and dinner. We need to spend more days, more weeks, more months to get this right.

Have you tried any Hong Kong pastries? Anything that took your fancy?

I’ve only been here a week, so I haven’t tried too much, but I like traditional lotus paste mooncakes. I have also tried and really like egg tarts — the flavour and the texture, it’s really good.

Will you be adapting any breads or pastries for Hong Kong tastes?

Of course! One of them will be the ‘Victoria Peak’. It will be a croissant dough, made like a peak and I will fill it with a lot of space so I can pipe jasmine or chrysanthemum tea syrup and lotus paste.

What have you got planned for your next step in worldwide domination?

Next month we will open in Saudi Arabia, after that Argentina. And then at the beginning of 2020, it’ll be the USA — in the San Francisco area. So there’s a lot going on.

Day after day, the difference is reducing. Because these days you have a lot of Asian bakeries that look like French bakeries, so it’s the combination of everything that makes an international bakery now. As for customers, each country is different. In some countries, they might prefer softer, or sweeter.

It depends which country you’re in, but in general, I would say that most Asians don’t like it too sweet. So, I try to reduce the amount of sweetness. Even for me, I prefer less sweet. Another thing I have noticed is that more and more Asians like European breads, like sourdough, too. Their palates have developed a liking for this taste as well.

What are your top three best-selling products in Hong Kong?