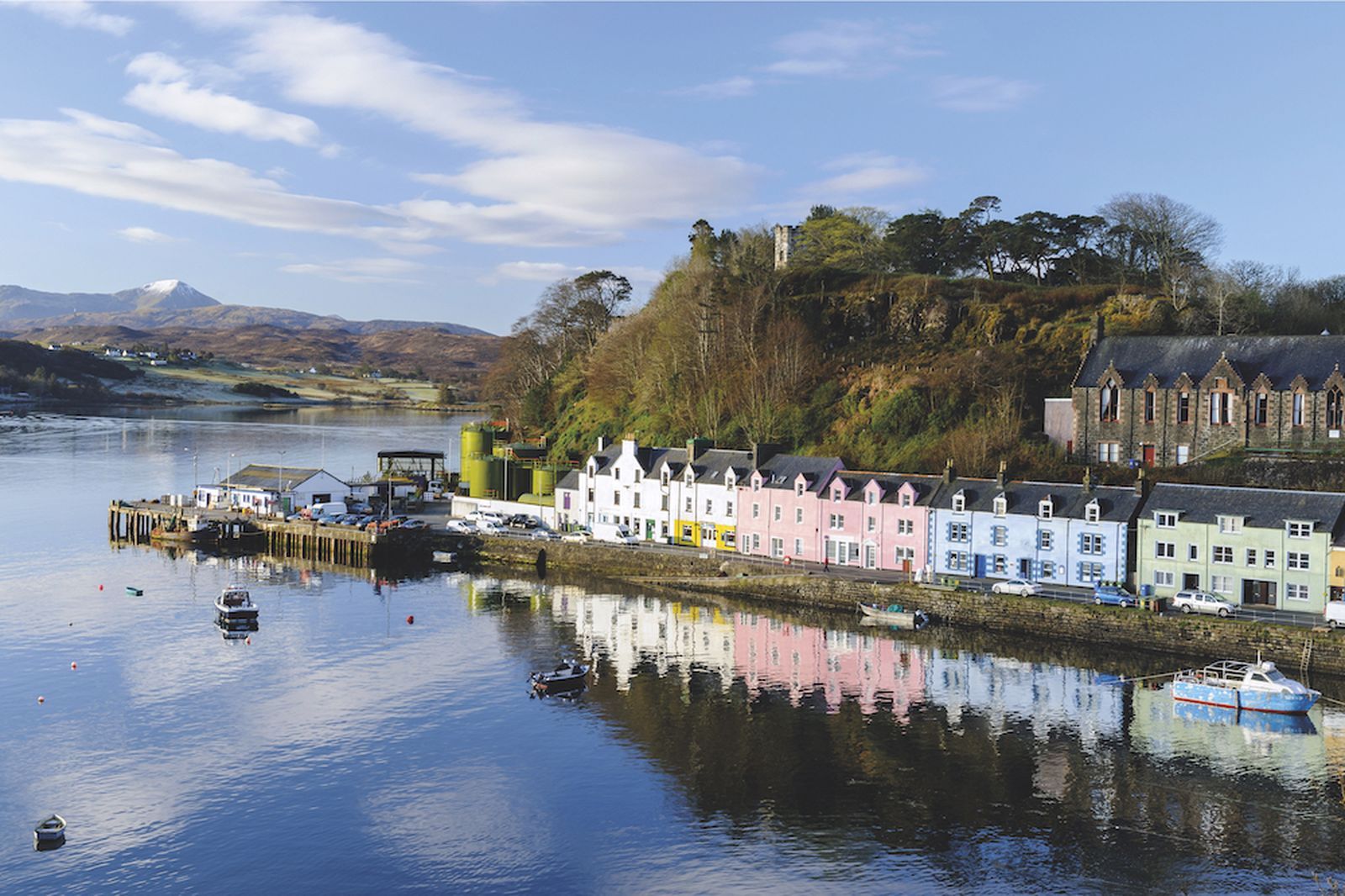 Almost as mystical as the Loch Ness Monster itself, the elusive Scottish sunshine is gracing us today, together with brilliant blue skies. After a three-hour drive from Inverness that took us along Loch Ness and past rolling hills and sprawling green landscapes, we arrive with much anticipation at Talisker Bay on the Isle of Skye, which the Talisker Single Malt Scotch Whisky is named after.

As a teaser, we already had the pleasure of tasting the 10-, 18- and 25-Year-Old liquids the night before at a pairing dinner. Today, a group of four journalists, including myself, would be among the first in the world to try the Talisker 41-Year-Old single malt Scotch whisky – the second release in the Talisker Bodega Series, which showcases the finest single malts finished in carefully selected sherry casks. Only 2,000 bottles of this precious 1978 vintage are available worldwide, and in Singapore, Diageo (the parent company of Talisker) is offering it exclusively through its private client team (email privateclientsg@diageo.com).

To acquaint travellers with its various offerings (excluding the 41-Year-Old), Talisker has partnered with bespoke travel company Quintessentially Travel (talisker@quintessentiallytravel.com) to offer whisky connoisseurs a rugged-luxe way of discovering the spirit of Talisker. This includes private distillery tours, guided hikes and several other activities that we are about to experience for ourselves. On the trip with us is Ewan Gunn, Global Scotch Whisky Master at Diageo and Talisker Prestige Ambassador. The Scot has been in the Scotch industry for more than two decades and is known for launching single-grain whisky Haig Club in partnership with David Beckham. The Talisker distillery, Gunn tells us, is among the most remote in all of Scotland, as well as the oldest working one on the Isle of Skye.

I cannot vouch for the latter, but remote is right. We hop out of our cars and set off on a walk, all the while peering through the trees, hoping to catch a glimpse of the distillery. As it turns out, we still have to be patient – the Talisker distillery is not actually on Talisker Bay. Instead, we walk down a path and are greeted by grassy fields stretching to foothills of gorgeous cliffs; along the way, we even spot a waterfall. The comfortable 20-minute stroll ends on the beautiful dark grey sands of Talisker Beach. There is no other soul in sight, as most visitors drive directly to the distillery, so we have the entire expanse to ourselves. Close to shore, a small white dinghy awaits us, reminding us that we are not, in fact, traversing Middle-earth.

The World Is Your Oyster

Hunter wellies on, we wade into the water and – there is no graceful way to do this – clamber into the dinghy that takes us further out to a yacht bound for the distillery. The mv Seaflower is a 40ft catamaran helmed by two skippers, who have prepared an incredible seafood lunch, already laid out for us on the deck. The spread is decadent: Generous plates of lobsters, crab claws, langoustines, smoked salmon, quiches and more. All the shellfish on the table was caught two days ago by one of the skippers’ family members who run a fishing business, and kept live till they were cooked for us fresh that morning. It is quite a lot to take in – the sumptuous spread, the sizzle and smells of scallops searing in butter, the sea breeze, a view of the stunning coastline of Skye and the warmth of the sun on our skin.

Just as the oohs and ahhs die down, Gunn drums up excitement again when he ceremoniously brings out a bottle of Talisker 25-Year‑Old – a crowd favourite, if last night’s tasting was anything to go by. His personal pick, however, is the 18-Year-Old – he revealed during the tasting that it was the bottle he had opened to celebrate the birth of his twin boys last September; he has even set aside a bottle for each of them for when they are older. Gunn goes around filling our special round-bottomed Talisker whisky glasses, which we all find rather ingenious as they merely rock gently on the table without falling over when you prod them. It’s the perfect glassware to use at sea – or any occasion where people are bound to get tipsy.

“I didn’t want to spoil the surprise yesterday, but this is definitely one of my favourite whisky pairings,” Gunn shares. On cue, freshly shucked oysters make an appearance as he continues: “It may sound a little strange, but I like to pour just a little bit of the Talisker 25 on an oyster and eat it.” Some wince at the thought of “wasting” the whisky this way, but we follow suit as Gunn demonstrates. It is not strange at all – the smokiness of the smooth, sweet Scotch goes perfectly with the saltiness of the mollusc.

It feels almost surreal when we catch a first glimpse of the distillery. Excitement builds as the white building with a brown roof slowly comes into view. It sits on the shores of Loch Harport and faces the Cuillins, a range of rocky mountains that make the Skye landscape so iconic. It is a timely reminder that everything, from the water to the weather, peat and distilling process, affects the character of a single malt: It is precisely this proximity of the distillery to the elements that gives Talisker spirits their distinctive notes of sea spray and coastal spicy peatiness.

Once inside, the distillery’s senior site manager Diane Farrell takes us on a private tour. She leads us through the entire distilling process, starting with the maltings before moving to the large copper stills where the liquids are distilled, the worm tubs, where the alcohol vapours are condensed, and lastly, to the warehouse. This is another prelude to the 41-Year-Old we have yet to taste. Set in front of us on empty casks are drams of the first edition of the Talisker Bodega Series. Released last year, the 40-Year-Old single malt was finished in Amontillado Sherry casks from Delgado Zuleta, the oldest sherry producer in the Sherry Triangle in Spain.

Similar to Talisker Distillery, the sherry bodega is close to the ocean, which gives the liquid its saltiness. At the same time, sherry has lovely fruit notes, which come through in the 40-Year-Old. Aromas of rich stone fruits coupled with smokiness are countered, along with a prickly pepper that lingers on the tongue. There is a lot going on here and it has an assertive complexity that might not be for everyone. “But neither is Scotch whisky and neither is Talisker,” Gunn reminds us. “And that’s okay because people who know what they love tend to love this, especially if they are Talisker fans.”

Plans to hold the grand 41-Year-Old tasting finale by a bonfire outside the lodge we are staying in are upended by the unwelcome arrival of biting midges – tiny flies that appear harmless, but fly in swarms to bite exposed skin. We move indoors, where, fortunately, there is a fireplace in a sitting room that is just as cosy. Before we taste the whisky, Gunn invites us to try a sherry from the Manzanilla cask used to finish the 41-Year-Old. It is fruity on the nose, but very dry and saline on the tongue – notes we would pick up in the Scotch.

Enjoying the warmth of the fire and finally holding our drams of the 41-Year-Old single malt, everyone takes their time to nose and sip. Despite having similar cask maturation and a mere one-year age difference, the 40- and 41-Year-Old taste substantially different. In the latter, smokiness and a kick of tart cherry and pepper come through first, and then almost in waves, the briny coastal Talisker notes pop forward. Next, a saline note from the sherry rides in on the back, then gives way again to the characteristic Talisker taste I now find myself familiar with. With every sip of the amber liquid, new notes start to come through: caramelised apple crumble, orange peel and a memorable numbing Sichuan pepper finish. It’s a sweet and smoky whisky – and clearly made by the sea.

“Sometimes, with a whisky that has been aged in wood for such a long time, you lose that sense of place,” Gunn shares, “but with ours, the distillery character is still present. I think it’s always important to have that character and maturity in a whisky, and both of our Talisker Bodega Series expressions have really achieved that.”

Want a whisky even more exclusive than the Talisker Bodega Series? How does your own entire cask of unique single malt sound? Diageo’s Casks Of Distinction programme is the private sale of rare and exceptional whiskies selected by Master Blenders. Only a handful of casks are released every year and offered to select clients. The price of a Cask Of Distinction can range from about £100,000 to £2 million, depending on factors such as the size of the cask, its age and rarity, and how well known the brand of the whisky is. Clients who purchase a Cask Of Distinction can choose to have it bottled right away, or wait up to five years to do so. Labels on the bottle can be customised, and each bottle in the cask will be numbered. This year, there are two Talisker Casks Of Distinction available in Singapore: a 40-Year-Old and 41-Year-Old, both aged in American oak casks. These are offered exclusively through Diageo’s private client team (privateclientsg@diageo.com).