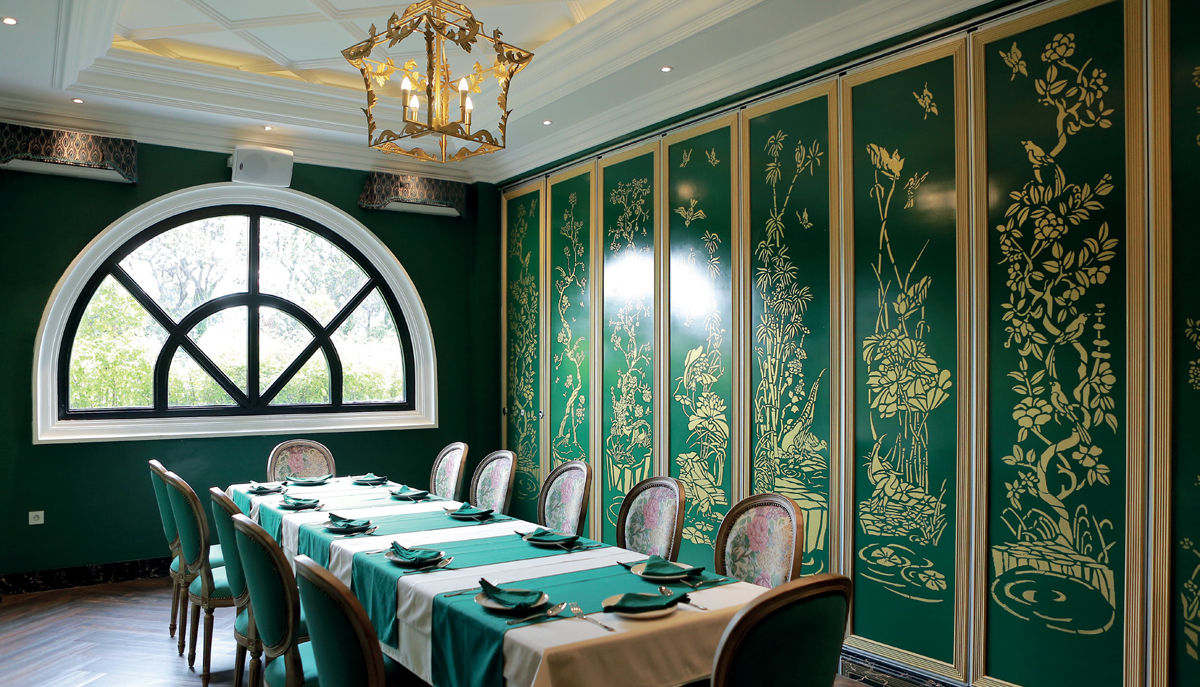 Head over to Jl. Cipaku I in Kebayoran Baru and you will find a grand white building with three spectacular glass pyramids on top of it. Step inside and be welcomed by marble floors, chandeliers, a 170 year-old piano and a grand staircase. Just like its name, the newly opened Eastern Opulence is a restaurant that exudes lavishness and luxury. Although it has a French-dining vibe, the restaurant offers the rich taste of Indonesian cuisine. It’s almost impossible not to be mesmerised by the restaurant’s imposing interior. The 1,000-sqm building has three floors, each one with a different theme.

Visit this one: Detox From Life at ESPA, Resort World Sentosa

The foyer features an enormous gebyok, a traditional room partition from Jepara, Central Java. The first level can accommodate up to 120 diners and has two areas: the East Wing with a wood floor and rattan furniture, and the West Wing with a marble floor. The second floor has a total of 70 seats in four VIP rooms named after gemstones: Amethyst, Emerald, Ruby and Sapphire. The third floor is the rooftop, which has a relaxed, chill-out ambience. A glass house with a bar and balcony garden can accommodate up to 50 people. Eastern Opulence is the latest venture of Tri Agung Nusantara, a company with textile, property and chemical firms as well as food and beverage operations. Its first F&B outlet was the Beer Brother bar and kitchen in Kemang, opened four years ago. Ricky Tan, the man behind Beer Brother and Eastern Opulence, says the latter was inspired by the Louvre Pyramid designed by I.M. Pei in Paris. “We originally planned to create a French restaurant,” he adds. “That explains the three glass pyramids on the roof. But the concept changed to Indonesian cuisine. It’s very intriguing how diverse our country is. When we consider Indonesian food, we talk about dishes from the hundreds of ethnicities that inhabit the archipelago. Our chefs are using only premium ingredients, such as Wagyu beef.”

Eastern Opulence boasts several signature dishes. The first one that comes to our table is a vegetable dish, pakis biola sambal terasi (Rp89,000). This features boiled fiddlehead fern with sauteed ebi, terasi paste and chilli paste. For the entrée, diners can order the crispy and spicy paru garing Bukit Tinggi (Rp 65,000). This famous dish from West Sumatra comprises deep-fried beef lung served with sambal. A less spicy option is tahu telor Trunojoyo (Rp85,000) from East Java. This is a silken tofu omelette and tenggiri fish paste, served with potatoes, bean sprouts, cabbages and covered in sweet peanut sauce. Among the main courses are bebek Raden Wijaya (Rp 159,000) and soto tangkar Istana Bogor (Rp 89,000). The first is half a duck that has been smoked in sandalwood for six hours. The result is a smoky yet tender texture and the sandalwood aroma gives extra points to the dish. The second one is a beef slow cooked in spicy coconut milk. ForRp 179,000, this is available in a portion big enough for two to three persons.