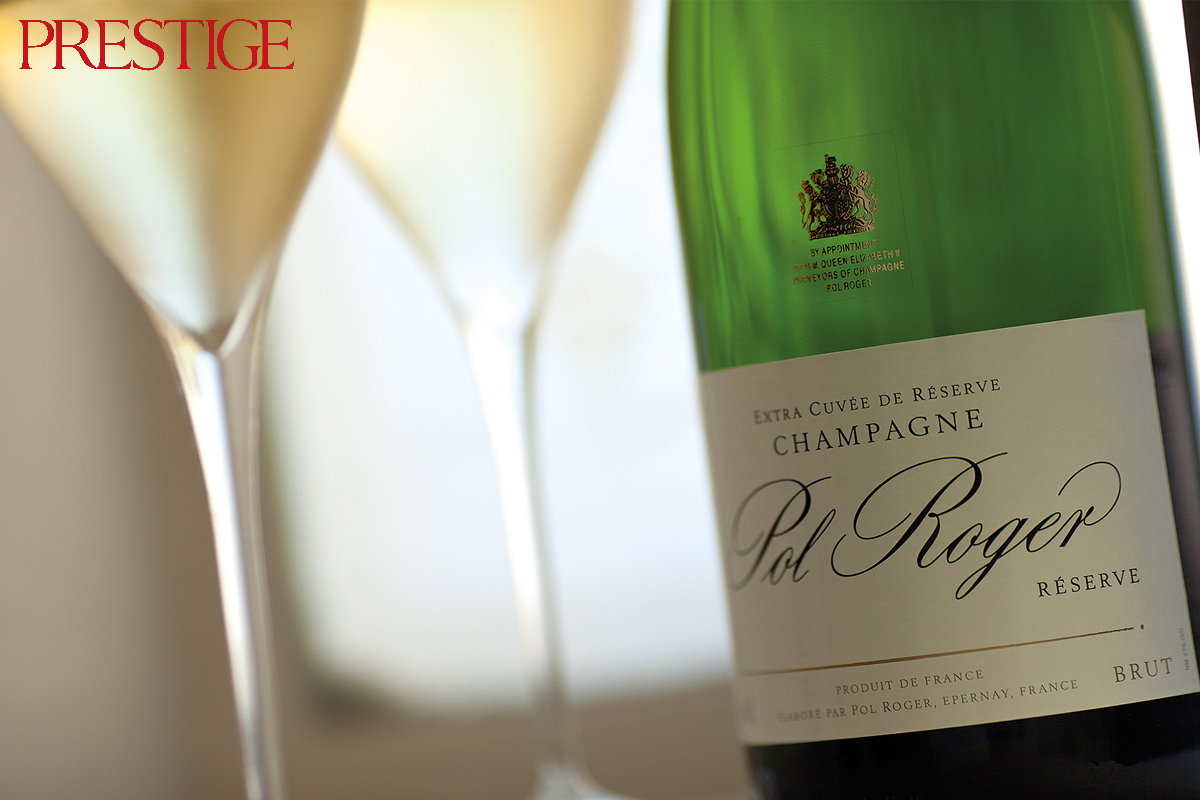 A steady stream of bubbles floats to the top of my glass, popping and releasing an intoxicating aroma of honeysuckle, chalk and lemon zest. How could the mere integration of carbon dioxide produce a wine so synonymous with celebration and luxury? The hypnotic effect is broken as I shift my attention back to Hubert de Billy, part of the fifth generation guiding the champagne house Pol Roger.

It was hi great great-grandfather who established the house back in 1849 at the precocious age of 18. The family has played an important role not just as winemakers but also in local politics. Maurice Pol-Roger was the mayor of Épernay during WWI, and his resolute stand against the Germans earned him the respect of the townspeople and a lifetime mayorship.

De Billy himself was 25 when he joined  the family business in 1988 after a stint making wines in California. He is a tireless ambassador  for Pol Roger with a packed travel itinerary, yet there is a twinkle in his eye and a jovial smile across his face as he talks about the progress the house has made. Some of the sparkle of champagne has evidently made its way into his soul.

The company remains in family hands, and is one of the smallest of recognized champagne brands. It has an outsized reputation, particularly in England. Pol Roger is one of the rare houses to hold a Royal Warrant, an appointment that demands the utmost discretion when supplying to the Crown. De Billy has the inside scoop on the drinking habits of the Royal Family but is understandably tactful when speaking on the matter.

In town for a promotional blitz across Asia, he laughs when I ask if the Queen is able to customise a champagne to her taste (the answer is no, and in any case Her Majesty doesn’t drink much champagne). Even the selection of the Pol Roger Brut Réserve for the wedding of Prince William and Kate Middleton was shrouded in secrecy until the very last minute (I imagined silk-covered crates being moved around in the dead of night). While glamorous events provide a nice PR boost for Pol Roger, Downing Street has adopted a more cautious approach.

The image of David Cameron enjoying champagne as his government passed budget cuts has left a bitter taste, although behind closed doors Pol Roger is still the choice of the Conservative Party, reveals de Billy. It was in fact a Conservative Party leader who was the greatest advocate for Pol Roger. The great statesman Sir Winston Churchill was said to consume at least a bottle of Pol Roger daily, drunk from a silver tankard. One of his most cherished friendships was with the beautiful Odette Pol Roger, whom he met in 1944 during a party at the British Embassy in Paris.

Both got along so well that Odette Pol-Roger would send Churchill a case of vintage champagne annually on his birthday, and in return Churchill named one of his prized racehorses after her. The relationship between Churchill and Pol Roger was permanently enshrined when in 1984 the champagne house released a prestige cuvee to honour the former prime minister.

Made predominantly of Pinot Noir, the Cuvée Sir Winston Churchill is a robust, age-worthy wine that sits at the pinnacle of the Pol Roger range. De Billy explains that the extended ageing of each bottle of champagne contributes to the elegance of the wine, stating, “It is very important for us to be one of the producers with the longest ageing. That is one specialty of Pol Roger.” Even the non-vintage Brut Réserve receives four years of ageing in cellars below the town of Épernay, far longer than the minimum of 15 monthsrequired by French wine regulations. According to de Billy, this makes it the oldest non-vintage champagne in the market. This prolonged maturation where the wine spends years in contact with the lees (spent yeast cells) in the bottle is the reason for champagne’s complex aromas and richness.

Pol Roger adheres to the tradition of riddling by hand, a process of twisting each bottle of champagne so that the lees collect at the neck where they are then removed to give a clear, luminescent wine. It’s a painstaking task considering that the cellars of Pol Roger, which span 7km, contain roughly 10 million bottles. Lying 35m below street level, the Pol Roger cellars are unusually deep, even for the Champagne region. At an average temperature of nine degrees C in the coolest part of the cellars, the secondary fermentation for the wines (where a mix of sugar and yeast is added to create the fizz) takes slightly longer.

“For us, time is not money. Time is quality,” explains de Billy. “It’s not a huge difference, roughly one or two weeks more, but it changes the nature of the sparkle. The size of the bubbles is directly connected to the speed of the second fermentation and the ageing. The slower the second fermentation and the longer the ageing, the smaller bubbles you will have due to the fact that the gas has dissolved into the wine.” This gives Pol Roger’s champagnes an exceptionally fine texture and chiselled structure.

One final winemaking technique defines the style of Pol Roger. The grapes are pressed in the vineyards and then left for 24 hours to let solid particles settle at the bottom, a process known as débourbage. The clear juice is then siphoned off. “At Pol Roger we reduce the temperature to seven degrees C in the winery and do a second débourbage, which will bring lightness, elegance and a floral aspect to the wine,” says de Billy. Following the latest technology, Pol Roger has moved through the decades from fermenting in wooden barrels to concrete vats, to iron tanks and finally temperature-controlled stainless steel.

“Our wine philosophy is based on being as neutral as possible, to let the grapes and terroir speak for themselves.” The latest addition to the Pol Roger stable is Pure, a non-vintage champagne launched in 2008 with three years ageing and zero added sugar. For many years, a little bit of sugar, or dosage, has been added to champagne to balance out its tartness, but global warming means it is now possible to make a wine with no dosage even in a region as cool as Champagne. Without the masking effect of sweetness though, it is absolutely critical to start off with a high-quality base wine.

“The Pure is certainly one of the most difficult wines to produce, because it is really difficult to find the right balance between ageing and acidity,” says de Billy. “So we choose fruit with low acidity but we reduce the ageing to keep the balance.” Compared to other champagne houses, Pol Roger may not have as large a marketing budget, but it spends its dollars shrewdly. Some of the sponsorships, such as bursaries for British equestrians, are necessary to maintain links with a key market. Others have the function of promoting wine education and grooming nascent talent, such as the blind tasting competitions between top business schools or universities.

Today Pol Roger can be found in 80 countries, including those in Asia. Ask, and de Billy will wax lyrical about pairing his champagne with Asian dishes. “To be honest I think it is easier to match champagne with Chinese than French food,” he says with a laugh.But soon it’ll just be French cuisine again for de Billy, who has to return to Épernay for the important task of tasting through the previous vintage and deciding the final blend for bottling. It is the culmination of a year’s labour, with every little step adding up to creating a wine worthy enough of carrying the Pol Roger name. “It’s like cooking, you know.

The difference between one dish and another is not just one thing. It is the addition of fresh instead of frozen ingredients, the type of meat, the work in the kitchen, all of which will result in something completely different.”