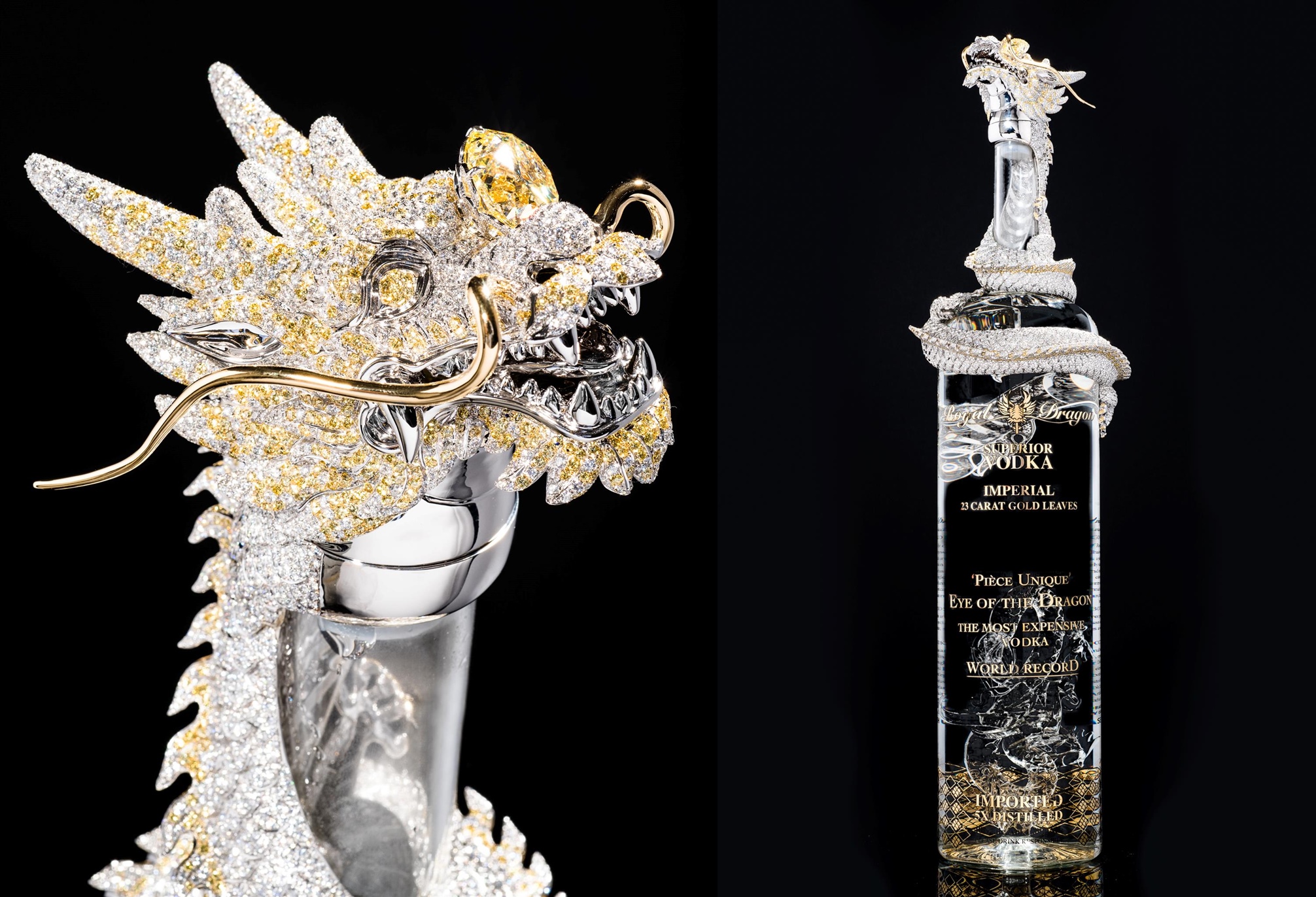 Seems legit: The most expensive vodka in the world

Wine & Dine
Seems legit: The most expensive vodka in the world
Share
Next article

The owner of ‘The Eye of the Dragon’ clearly wanted to make a shimmering, superfluous statement. It wasn’t enough that the bottle is filled with literal gold (the ultra-premium Royal Dragon ‘Imperial’ Vodka comes infused with edible 23k Swiss-sourced gold leaves), but its 2kg-heavy armour is tricked out in solid 18k gold as well as topped with a GIA-certified 50ct round intense yellow diamond, which alone costs a whopping US$4.6 million. Michel Morren didn’t seem too happy though when the press recently reported the theft of a bottle of Russo-Baltique in a Copenhagen bar, worth US$1.3 million, and called it “the most expensive vodka in the world”.

The founder and chairman of Royal Dragon Vodka proclaimed, “There is no doubt we own the most expensive vodka in the world. The value of Russo-Baltique’s bottle does not even come close.”

Well, Morren need not worry too much. The stolen bottle, a white-and-yellow-gold, diamond-encrusted spectacle which was featured in the hit TV series House of Cards and most recently loaned from a Russian oligarch to be openly displayed at Cafe 33 bar, may have been found at a construction site in the Danish capital last Friday, January 5, but it has been slightly damaged. It’s also completely empty.

Royal Dragon’s ‘The Eye of the Dragon’, on the other hand, is safe in Morren’s vault somewhere in Hong Kong. Estimated to be valued at a steep US$5.5 million, the 6L bottle comes with 15,000 additional diamonds with a garlanded total of 620-ct of real dazzlers. Morren and his team, in partnership with Scarselli Diamonds New York, took eight months to design and produce the one-off magnum opus.

Royal Dragon was founded in 2012 by Dutch entrepreneurs Ralph Pelzer and Michel Morren in Hong Kong. To kick off the upcoming Lunar New Year celebrations, chairman Morren said he is planning an official unveiling of the “legit” most expensive vodka in the world, on February 16, via a live-streamed video from a secret location. Expect a glittery reveal, filled with frills and well, a bottle filled with vodka.

Mauri Restaurant Takes Over The Dining Room at Raffles Jakarta